I just received a couple of the SmallRig Arca-Swiss plates for the latest generation of Sony alpha 7 and 9 cameras. They are quite a bit cheaper than the RRS plates and have some interesting features, so I decided to do a short report.

With the RRS plate, you can order a version that has a removable vertical Arca-Swiss foot, or one that doesn’t. The SmallRig just comes one way, with the removable foot. There are two ways to remove the foot from the rest of the SmallRig plate. The one that removes the most weight is unscrewing the Allen screw from the bottom, sliding the foot out, and putting the screw back in the foot so you don’t lose it. If you do that, you’ll have two pieces that look like this: 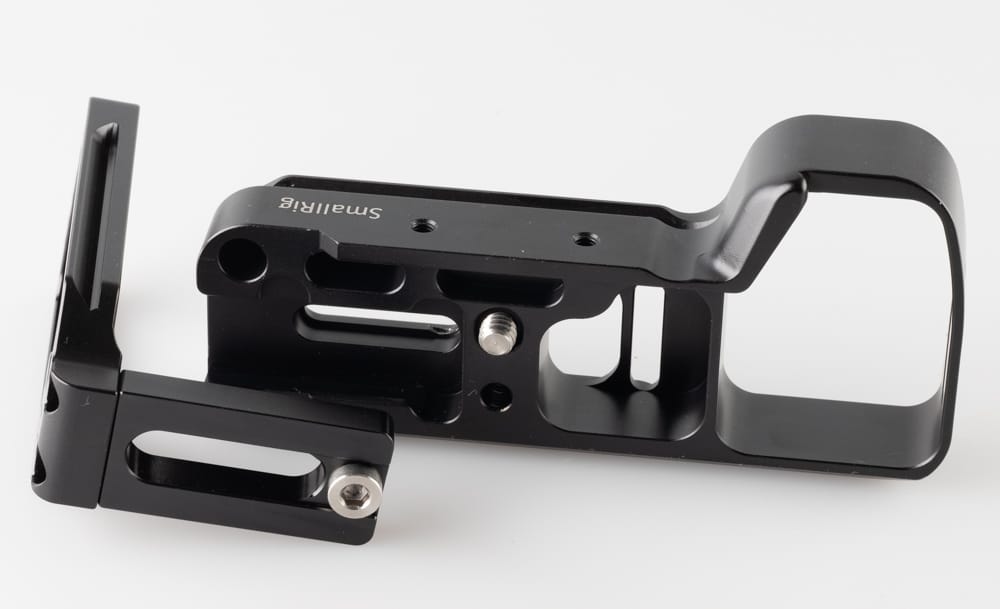 You could also unscrew the two smaller bolts in the bracket — you can see the relief for them on the very left of the shot above — but that leaves the slider in place.

I don’t use the vertical foot much because it limits access to the left side of the camera, even though it slides out half an inch or so. But there’s a feature of the SmallRig foot that may interest you: 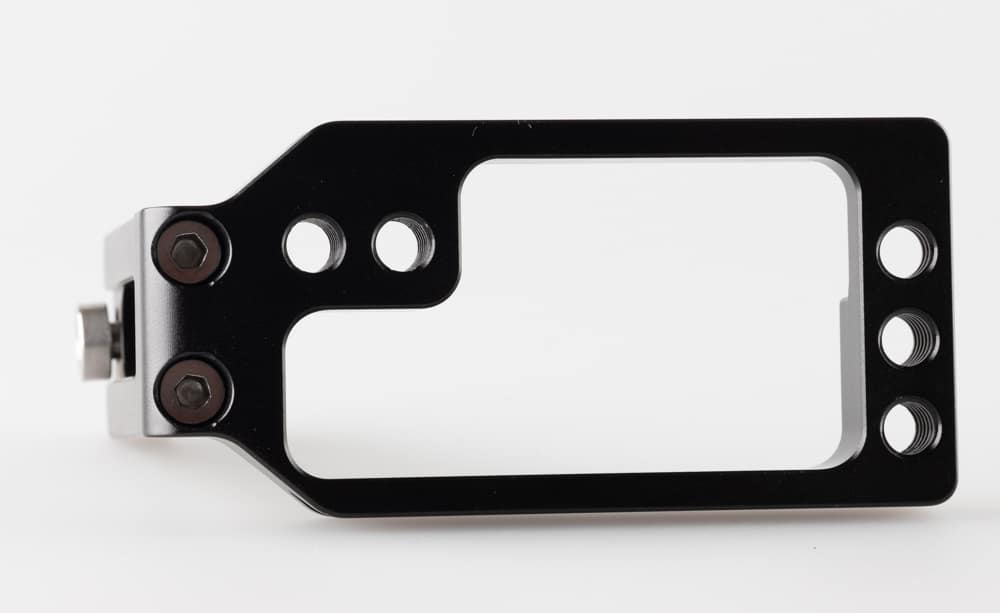 Note the 5 1/4-20-threaded holes in the foot. Those could be useful if you want to attach stuff — maybe a 7-inch display, maybe a recorder, maybe a flash — to the side of the camera.

Here are both the RRS and the SmallRig plates as viewed from the bottom rear: 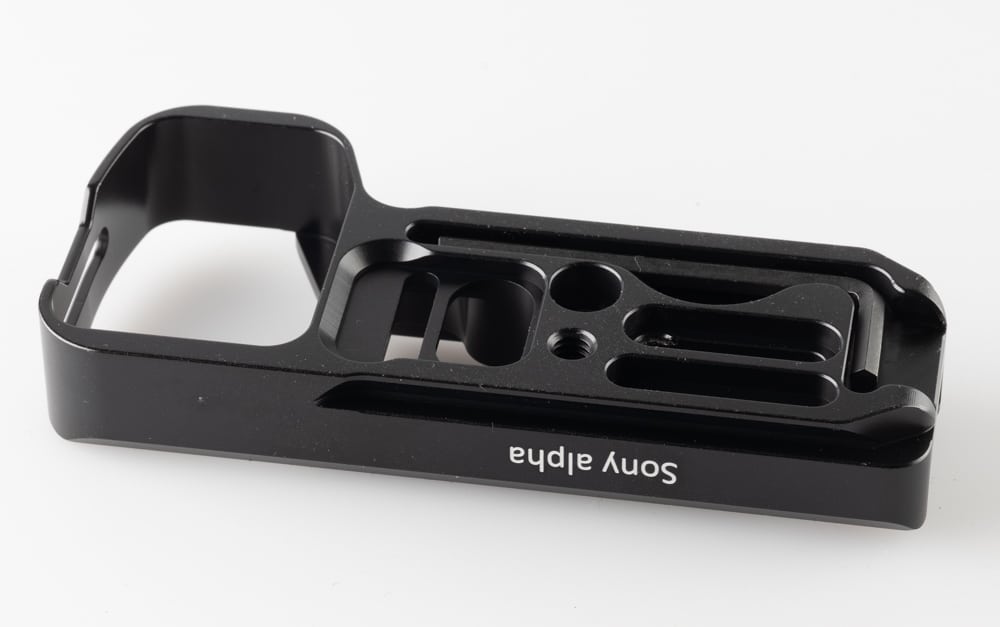 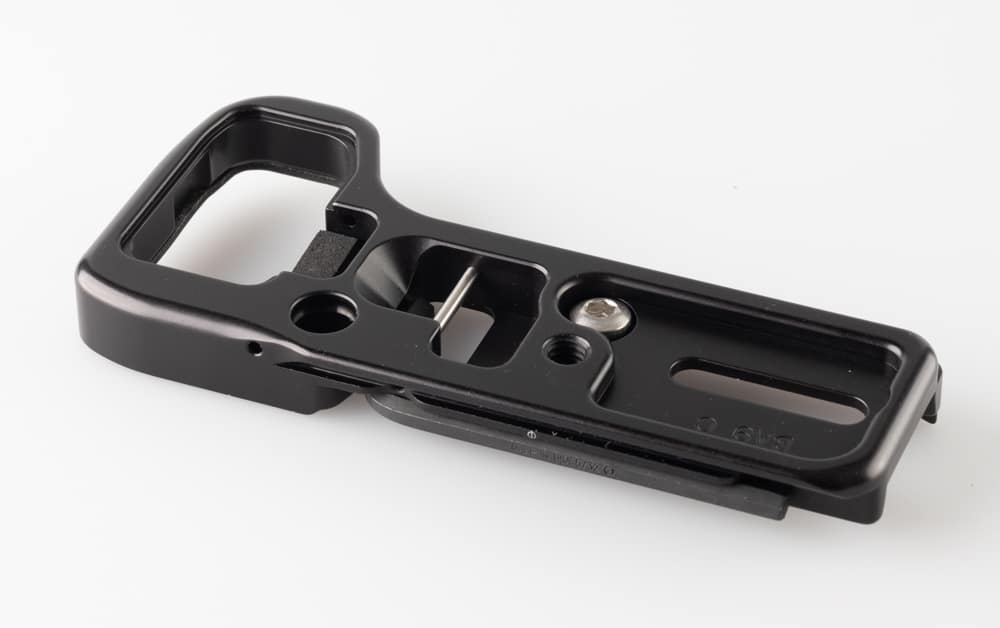 Both RRS and SmalRig provide a place to stow the Allen wrench. Both provide loops on the bottom for a strap, although the RRS one looks a little stronger (and certainly more expensive to make). The SmallRig plate provided another strap attachment point on the side of the plate near the battery door.

The biggest difference is the way the battery door is handled. In the RRS case, the battery door must be removed from the camera and attached to the plate. The SmallRig plate allows battery access by leaving the door on the camera and providing more finger relief. Both of these approaches mitigate to some extent the poor weather sealing of the Sony a9, a7III, and a7RIII battery doors.

Another important difference is that the SmallRig plate is thicker:

The thick SmallRig plate provides enough grip surface that I can use my pinkie finger to hold the camera. With the RRS plate, my little finger ends up on the bottom of the plate. So the thickness of the SmallRig plate is a win for me. Your fingers may feel differently, though.

Here are the two plates viewed from the top:

See the gasketing that surrounds the battery opening on the RRS plate? That’s a good thing, but water can still get through the door when it’s mounted to the bottom of the RRS plate.

There are two threaded holes on the front of the SmallRig plate that could be used to attach stuff, although they are smaller than 1/4-20. The battery access relief on the SmalRig makes the metal thinner; I suppose that it could be bent if the plate is bashed against something hard. That could be considered a good thing if it reduces the g-loading on the camera enough  to prevent damage; the plate could be considered sacrificial.

Kirk and other Arca-Swiss plates are incompatible with the RRS cam clamps; it feels like they are locking in place, but the fit is too loose and the grip is iffy. These plates work poorly with the RRS quick-release clamps. The fit is tighter than real RRS plates. Of course, like the Kirk plates, they work just fine with the thumbscrew clamps.