In the previous post, I looked at the IBIS performance of the Fuji GFX 100 with the 110 mm f/2 lens. In this post, I will examine the IBIS efficacy with a lens of equivalent focal length on the a7RIII and a7RIV. The lens I chose was the Zeiss Batis 85 mm f/1.8. That lens is optically stabilized, which means that the firmware in the camera sends yaw and pitch movement instructions to the lens rather than the IBIS, but the improvements in the a7RIV over the a7RIII appear to be in the firmware rather than the IBIS mechanism itself. I’ve done one other a7RIII/a7RIV IBIS test on a non-stabilized lens, and I will do more.

I sat on an armless rolling secretary’s chair for the captures. I held the camera in a modified Pete Turner grip: right hand on the camera grip, left palm on the bottom of the camera, and left fingers extended to just short of the focusing ring on the lens.

Here’s what the camera saw: 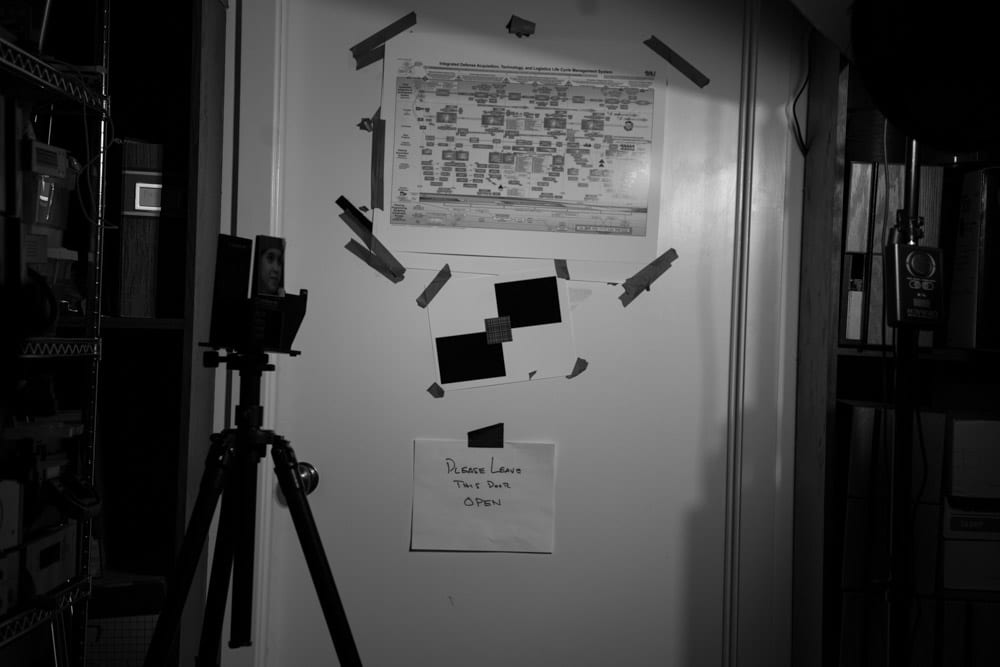 With both the a7RIII and a7RIV, I used the following test conditions:

Here are the results for the a7RIV: 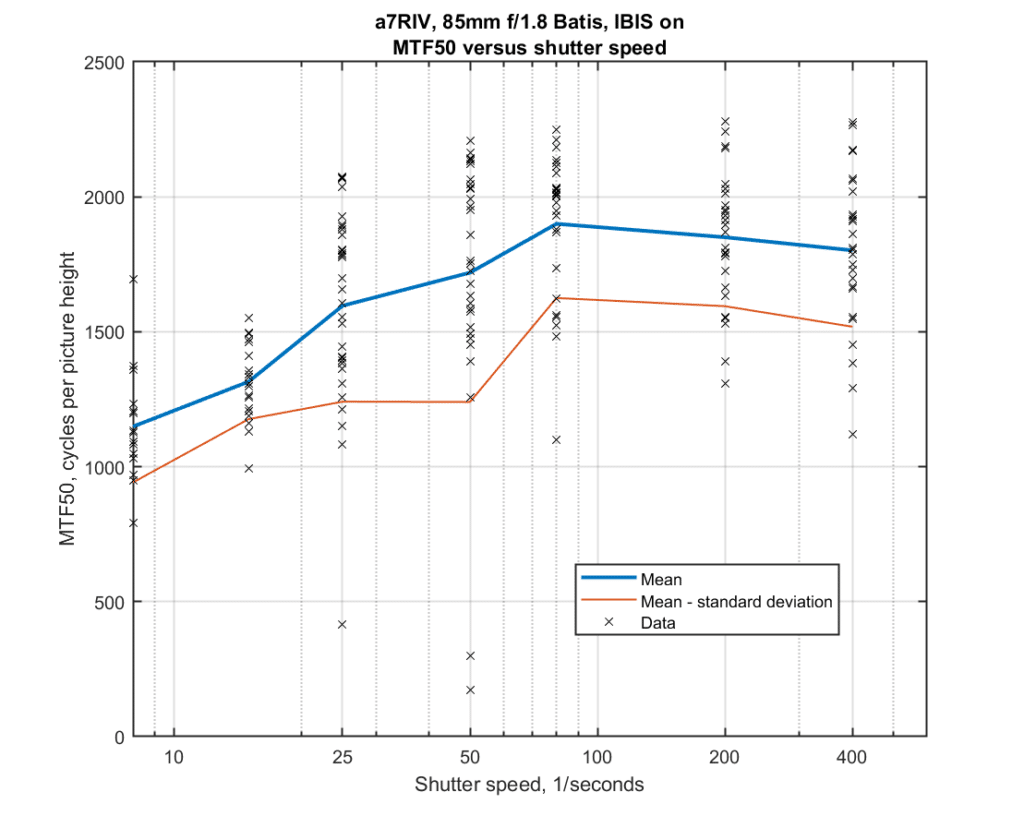 The vertical axis is the MTF50 in cycles per picture height. The horizontal axis is the denominator of the shutter speed — 1/100 second is plotted as 100. The heavy lines are the mean (aka mu, aka average) values. The thinner lines are the mean minus the standard deviation (aka sigma). The black x’s are the individual exposures. This is excellent performance. Most people are going to consider anything with an MTF50 of over 1500 cy/ph to be very sharp. There is virtually no difference in mean sharpness at all the shutter speeds tested. The same is true of scatter. In this test, autofocus errors are included in the results, which may contribute to the scatter. 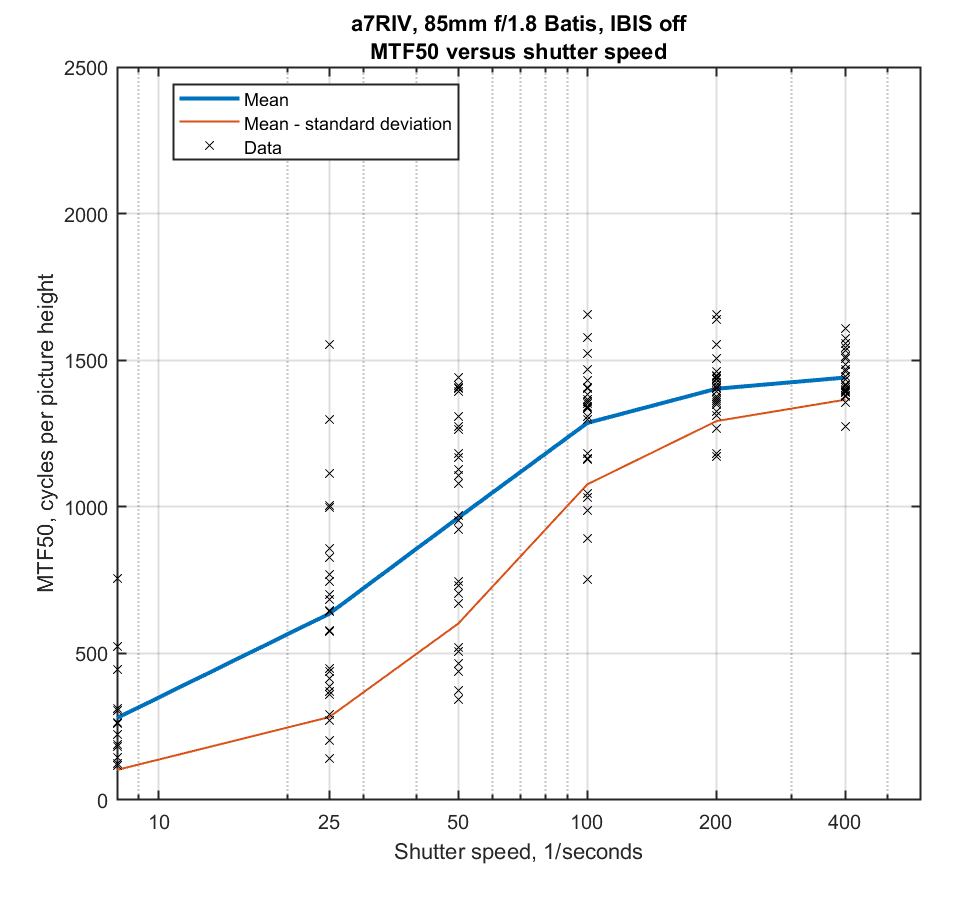 Both at once, without the data points themselves plotted: 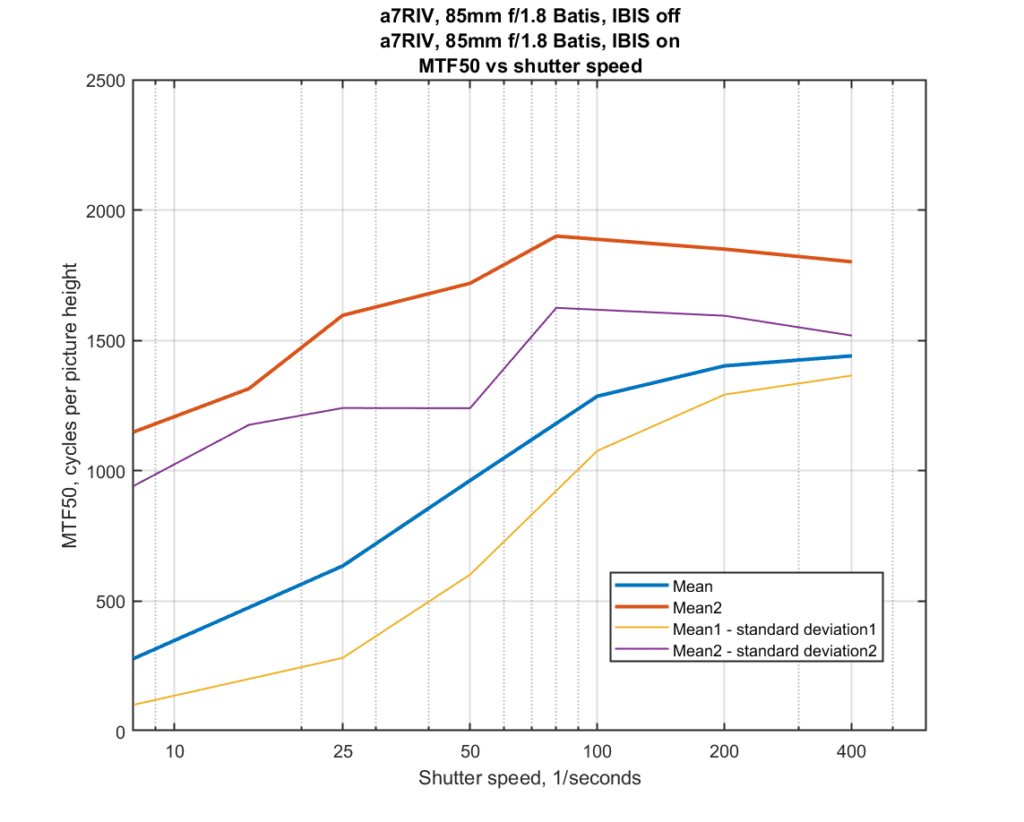 The IBIS data shows good (mean > 1500 cy/ph MTF50) down to 1/25, and acceptable results to 1/8 second. I am surprised by the low MTF50s for the non-IBIS case at 1/400 second. I suspect that would go away if I repeated the test. I am also surprised at how well the IBIS cases look at very slow shutter speed. I never got those kinds of results when I shot standing up. In fact, I had to go back and add low shutter speed captures after I saw the result where the slowest shutter speed I used was 1/25. The improvement of the IBIS-stabilized case over the non-IBIS one appears to be about 3 and a half stops.

Now for the a7III — I didn’t do the slow shutter speeds for this one: 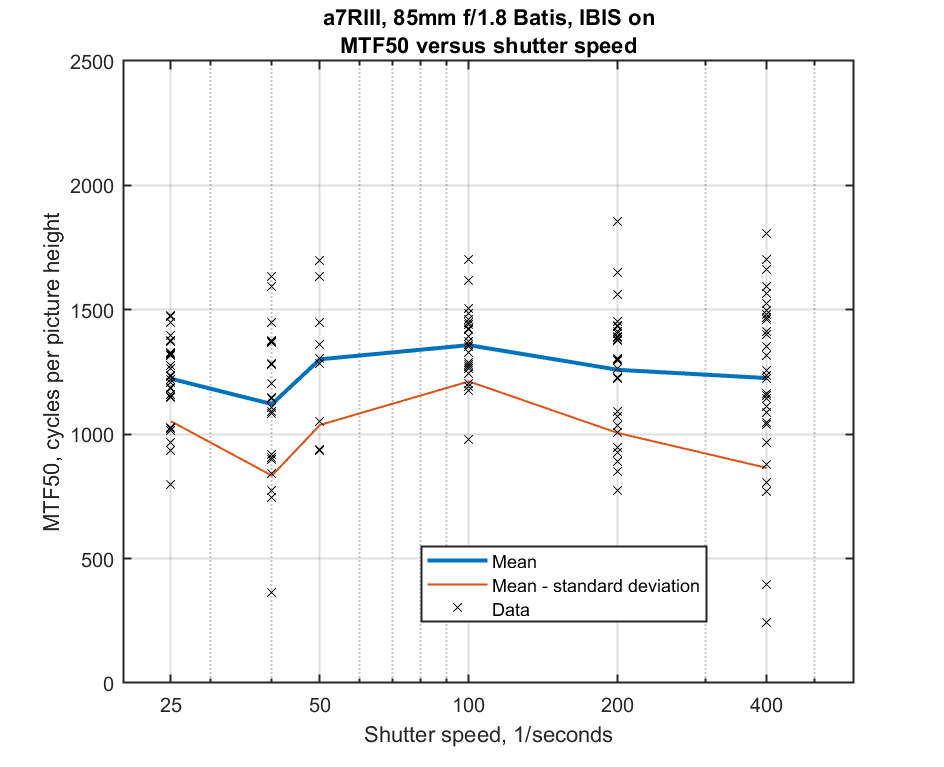 And with IBIS off: 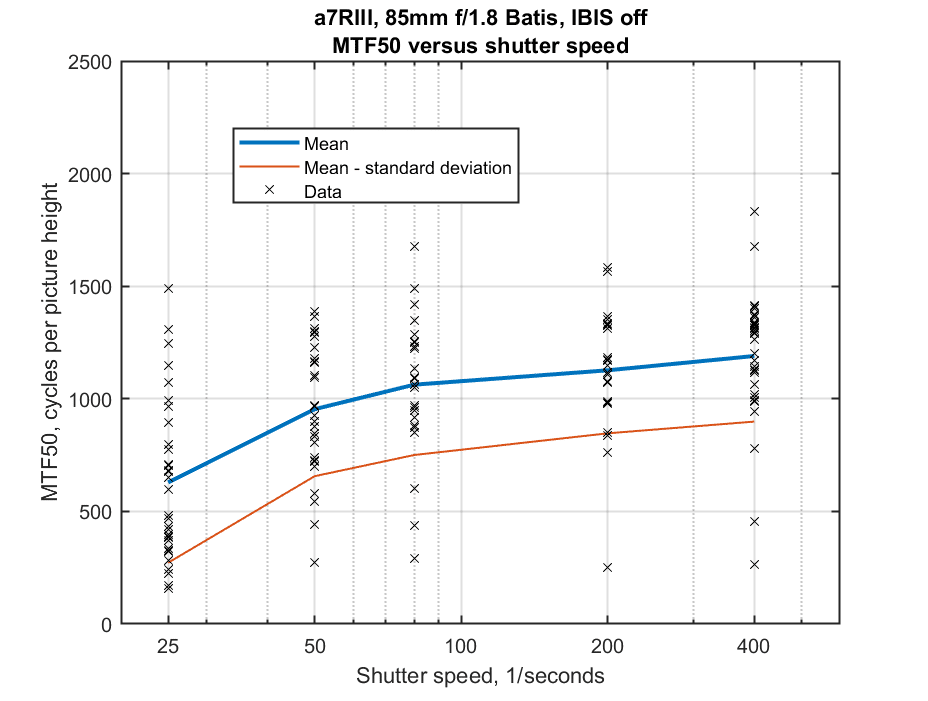 Both IBIS and non-IBIS data: 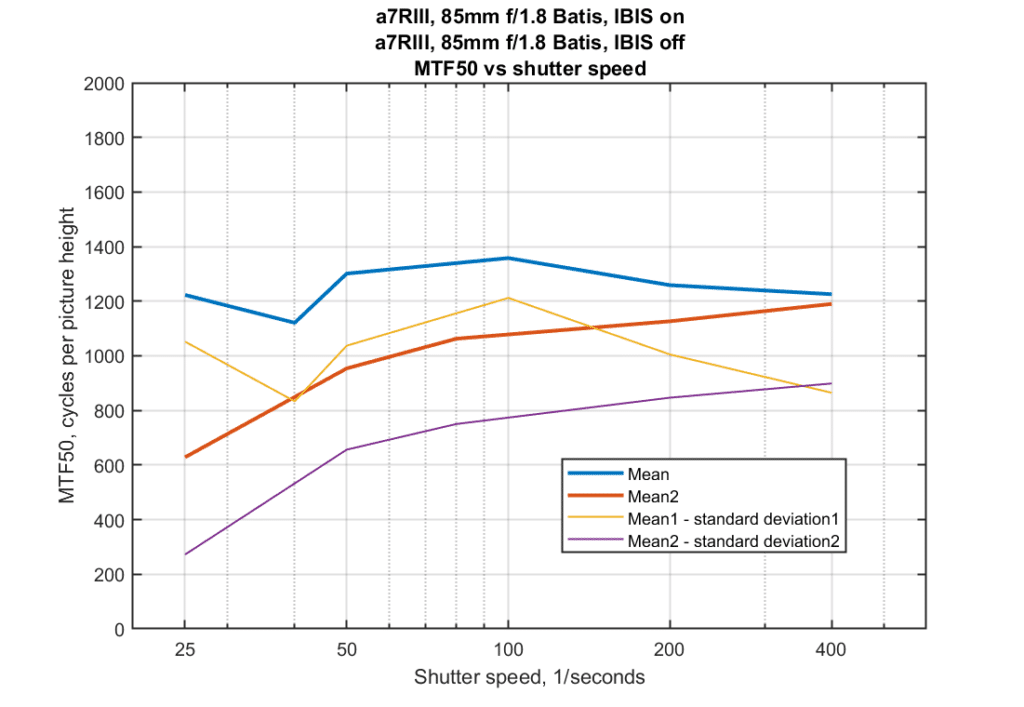 A comparison of the a7RIV and a7RIII: 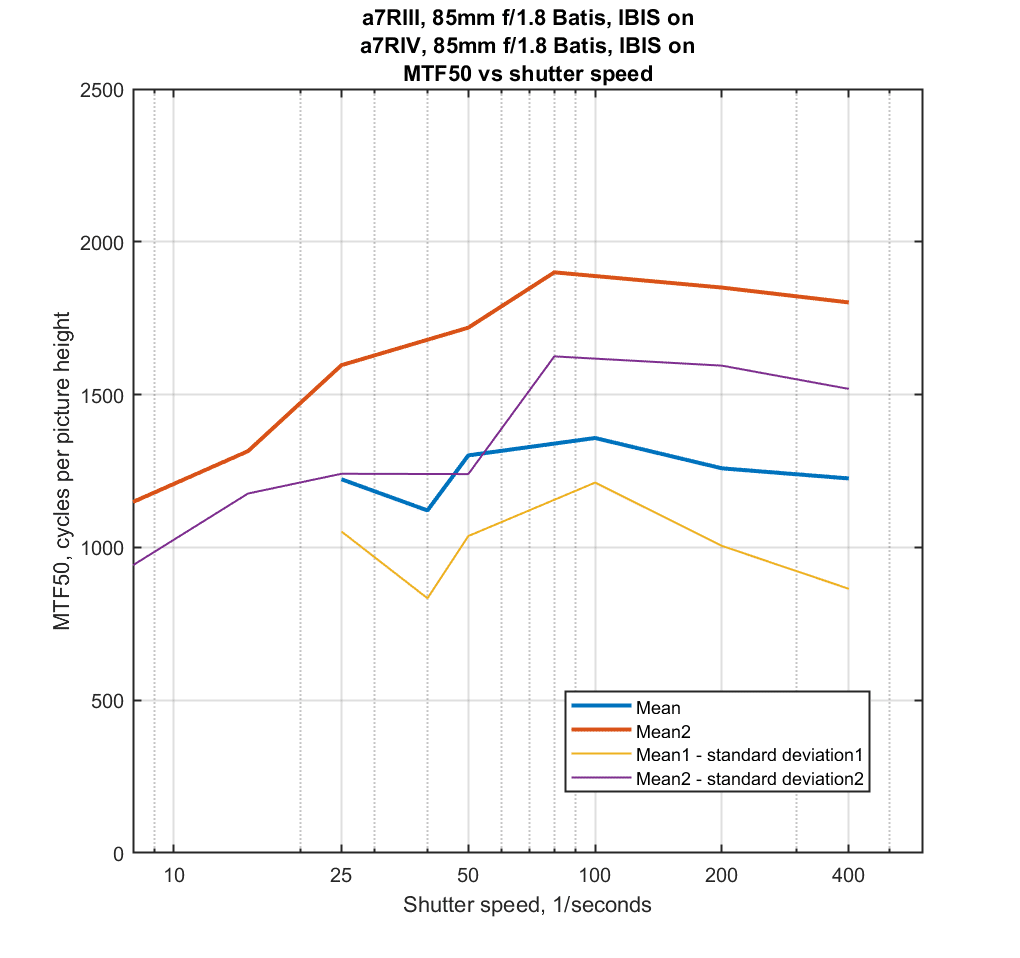 The a7RIV has better results because of its higher-resolution sensor.

And, for completeness, a comparison of the a7RIV and the GFX 100 with an equivalent lens: 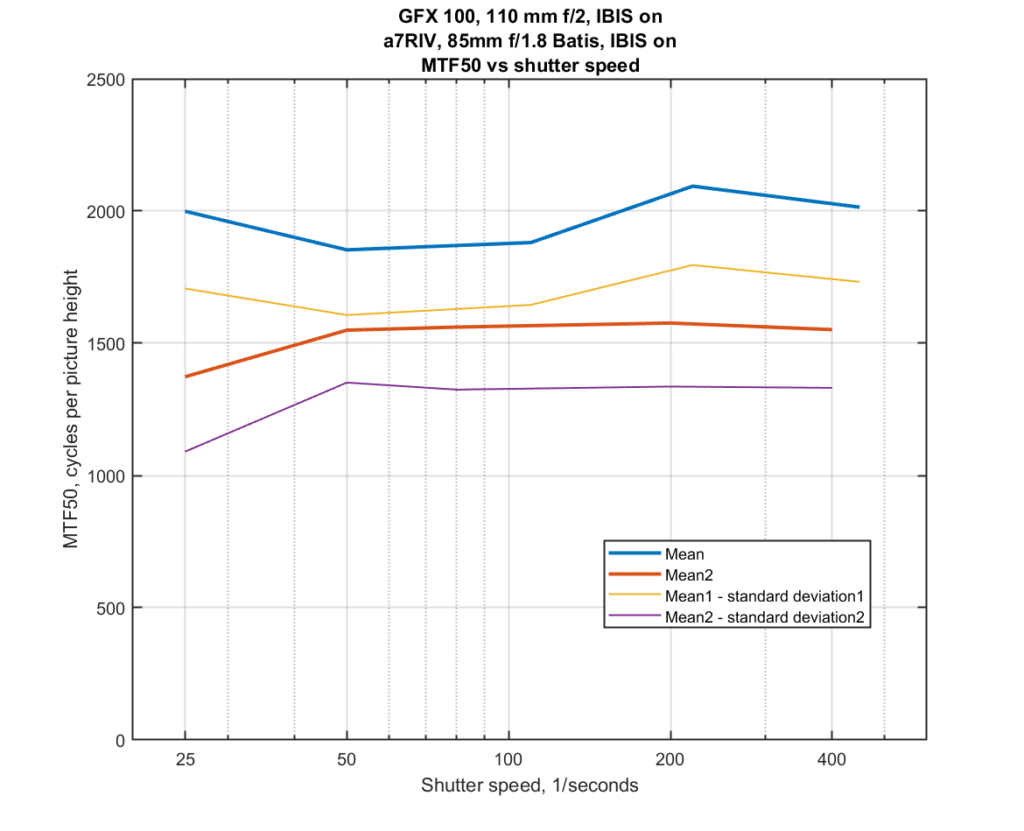