I haven’t posted here in a almost three weeks. That’s a long time for me. There’s a reason for that; I’ve been doing some actual photography. This is a post about what I’m doing, concentrating on how I’m doing it.

Most of my posts the past few months have been, uh, focused on testing macro lenses on the GFX 100 and GFX 100S at reproduction ratios of 1:3 to slightly higher than 1:1. My aim in that testing, besides intellectual curiosity, has been to set up a system for digitizing (I’ll call it scanning here, even though that’s not technically correct at one level) negatives. I’ll be doing mostly silver negatives from 35mm through 4×5, but I’ll do some color ones, too.

After a few false starts, I’ve devised a system that works well for me. Here’s a picture: 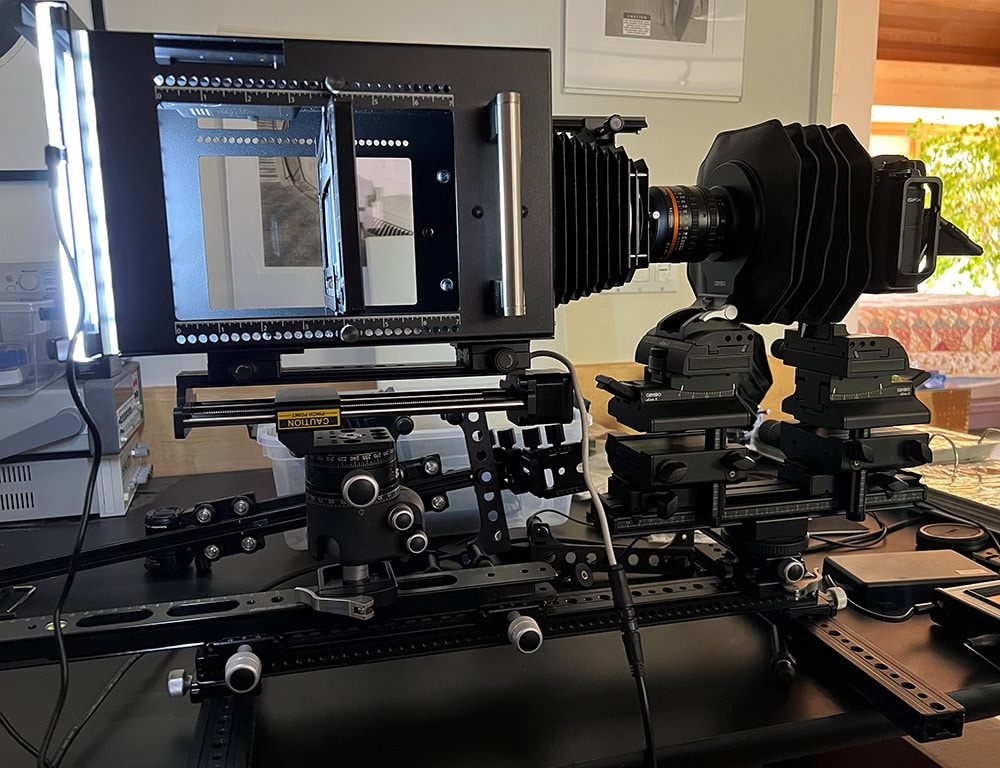 Looks a bit kleudgy, doesn’t it? One wag on DPR called it my “steampunk scanner”. I admit that it’s not the most esthetic piece of photographic equipment around, but it does the job. The only thing that needs work is vibration isolation, and I’ve got a plan for that.

Here is a list of my requirements for my scanner:

The lenses that I eventually settled on were the Rodenstock 105mm f/5.6 HR Digaron Macro and the Schneider Kreuznach 120 mm f/5.6 Macro Symmar 0058, 0059, 0060, and 0062. None of those have focusing mechanisms. I could have adapted them to the camera using adapter tubes and focusing helicoids, but, in the interest of flexibility, decided to use a Cambo Ultima II with an Actus conversion. That gave me complete control over the alignment of the camera and provided a simple way to change magnification as I scanned different formats. I mounted all the lenses on Actus lens boards, using V38 to M39 converters (and V38 to M42 and M42 to M39 stacked converters) for the Schneider lenses. Ignore those adapter specs unless you’re planning on adapting the Schneider lenses yourself.

I decided to use a Cognisys rail for controlling the stacking. I had experimented with using copy stands and lightboxes, but I decided that I wanted a horizontal scanning arrangement, with the lens axis parallel with the floor. The reasons were ease of use and the fact that I thought that there would be less backlash and less strain on the rail if it weren’t working against or with the help of gravity.

Then I had a decision to make. Should I have the rail move the camera, or should I have the rail move the negative? I chose to have it move the neg. There were two reasons for that. First, the Ultima II is a fairly tall camera, and putting the Cognisys rail under it would make it even taller. Second, The Ultima II is heavy, and I was pretty sure I could get a negative holder and light source that was lighter.

For the negative holder, I chose the Film Toaster. It provides in one unit:

It turns out that the gear that does the last bullet above was incompatible with the Cambo Ultima II hardware, so I deep-sixed it, and build an assembly to do the same thing out of mostly Really Right Stuff  Arca Swiss rails and clamps. The RRS assembly was also more rigid than the Film-Toaster-supplied one, which gave me a throughput advantage in that I didn’t have to let the system quiet down as long between the exposures of a stack.

I’ll break down the components for you.

Now let’s look at the FIlm Toaster up close.

The light source is on the left. There are two brackets to position film holders. The unit comes with only one, but I ordered a second so I wouldn’t have to fiddle with the thumbscrews (at the top and bottom) when I changed film size.

Here’s the film holder for 4×5 negatives:

It’s a machined piece of plastic into which a modified Omega 4×5 negative carrier is inserted. I further modified the Omega negative carrier to reduce its height, and rounded the corners to make it easier to insert into the black plastic gizmo.

The Film Toaster comes with a lens shade that mounts magnetically: 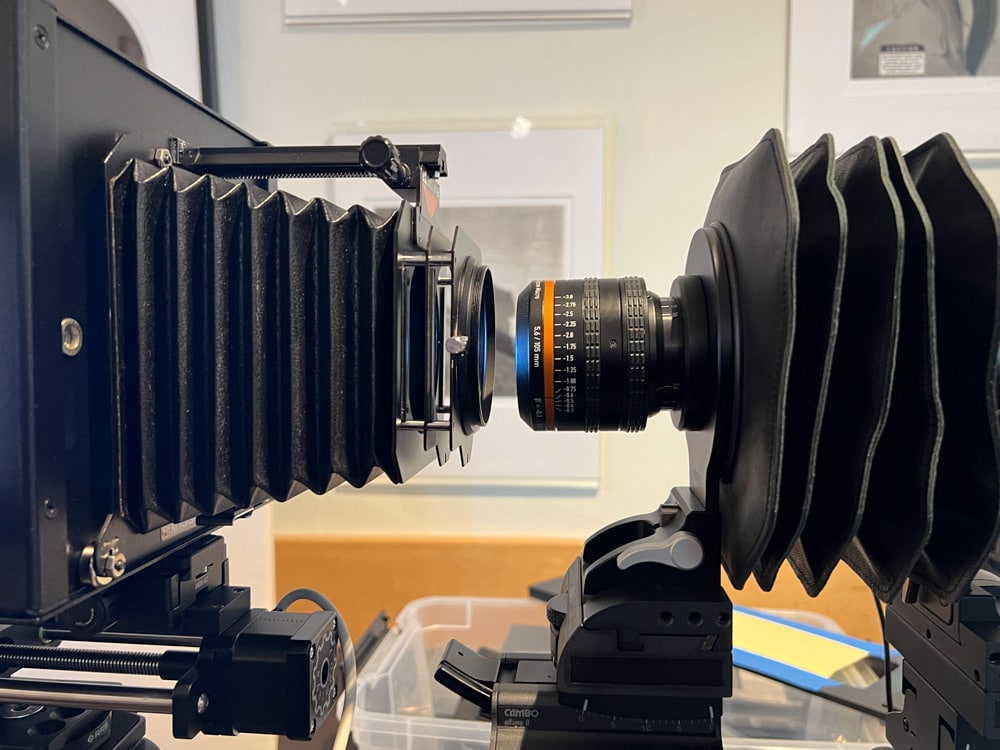 I’ve been using the Rodenstock 105 macro most of the time. That’s it above mounted to the Cambo view camera. 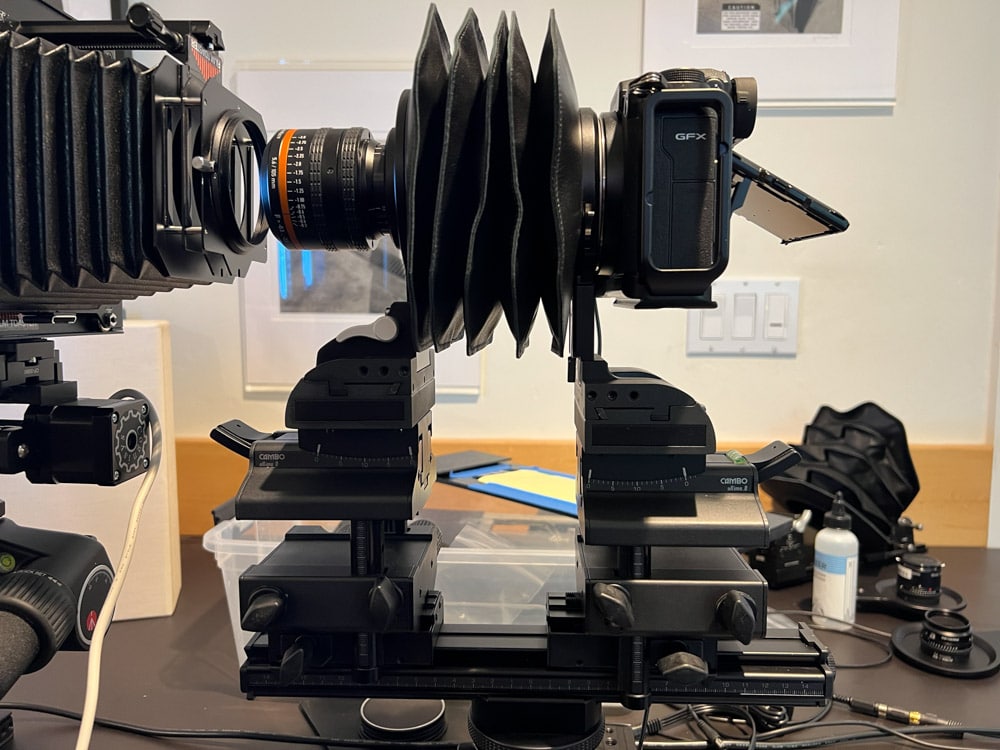 The back can be shifted independently of the lens, which will come in handy if I decide I want to do stitching. You can see the stepper motor of the COgnisys rail in the center far left. There are a couple of lenses  on Actus lens boards in the lower right of the above picture.

Here’s how the camera is mounted: 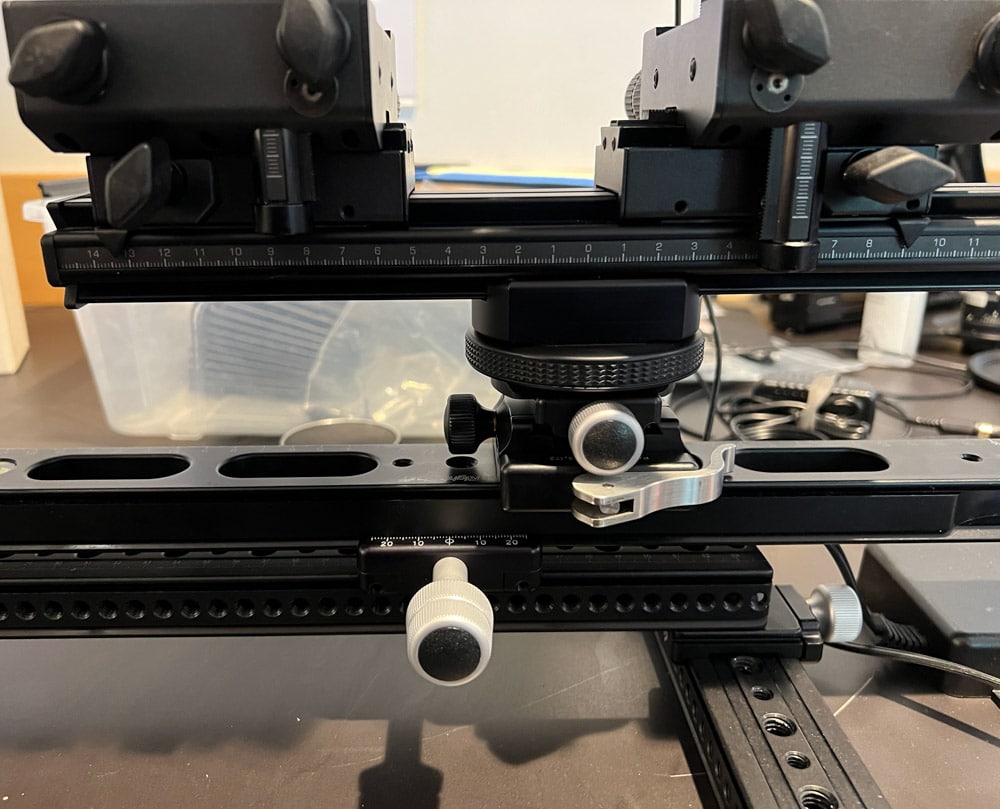 I can slide the whole thing back and forth by loosening the RRS clamp.

Here’s how the Toaster is supported: 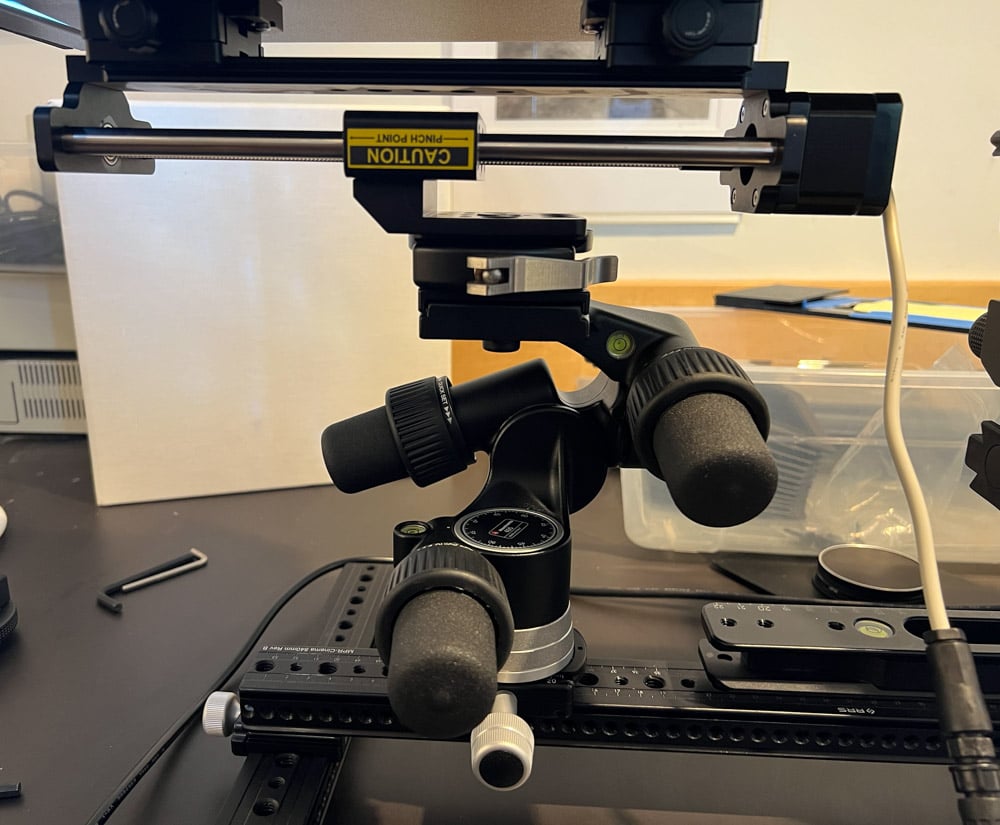 A three axis geared tripod head allows me to adjust the Toaster precisely.

Here’s how it sits on the table. The camera end: 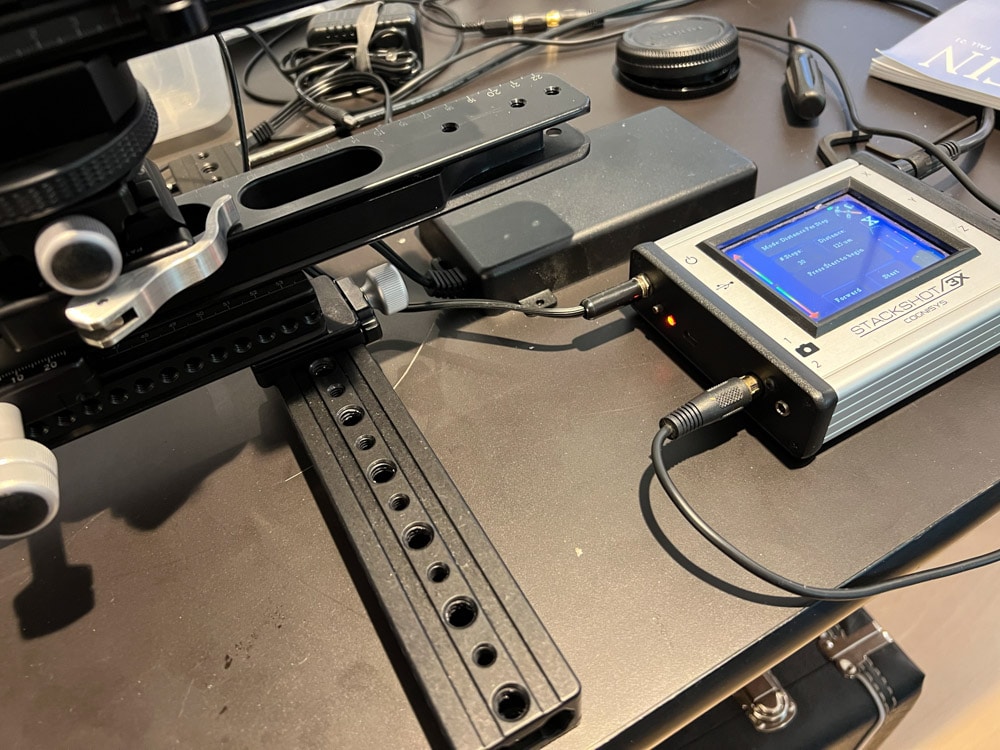 The RRS rail mounted crosswise to the others gives stability. The box with the blue screen is the Cognisys controller. 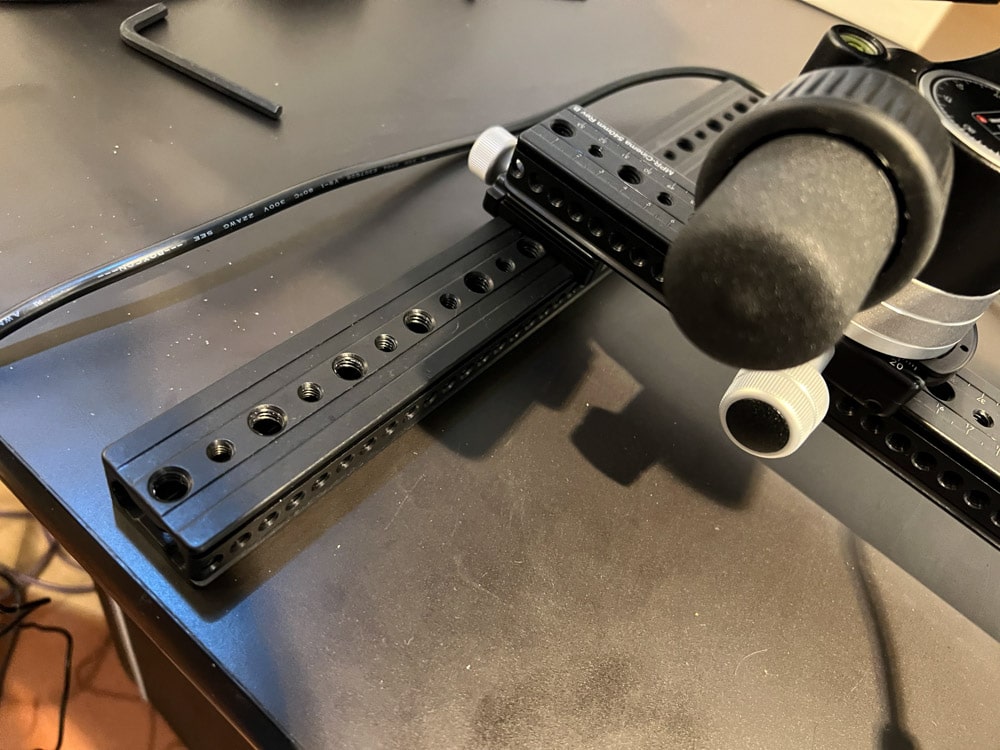 This works very well for me. The only problems are susceptibility to vibration, and I’m working on fixing that, and the connection between the Manfrotto tripod head and the rail. The head comes with a proprietary clamp and plate. There is a screw supplied to connect the plate to a camera — or, in my case, an Arca Swiss clamp, but the provided slot head screw isn’t very secure. I’m looking at ways to fix that, too.