In this post, I reported that I was getting rid of all my Sony cameras and lenses. I’ve done that. Now I have the GFX xxx and the Nikon Z9 that I’m using for most of my work. However, that leaves me with no small camera. I decided I wanted one. I had been eyeing the Leica Q2 for a while. I once owned a Sony RX1, and liked the size, the lens, and the leaf shutter, but I found it fragile and handicapped by its small battery. Since I was getting a Q2, I decided to spring for the Monochrom. I’ve never owned a monchromatic digital camera. I’ve done some work on developing deep-IR images without demosaicing, and found that it offered some marginal gain in image quality, and I was curious about how the Q2 Monochrom would perform against a 50ish MP Z9 or GFX 50S. If you’re curious, too, don’t worry, I’ll be doing some controlled testing of that.

The camera arrived yesterday, and I unboxed it.

The packaging is impressive. 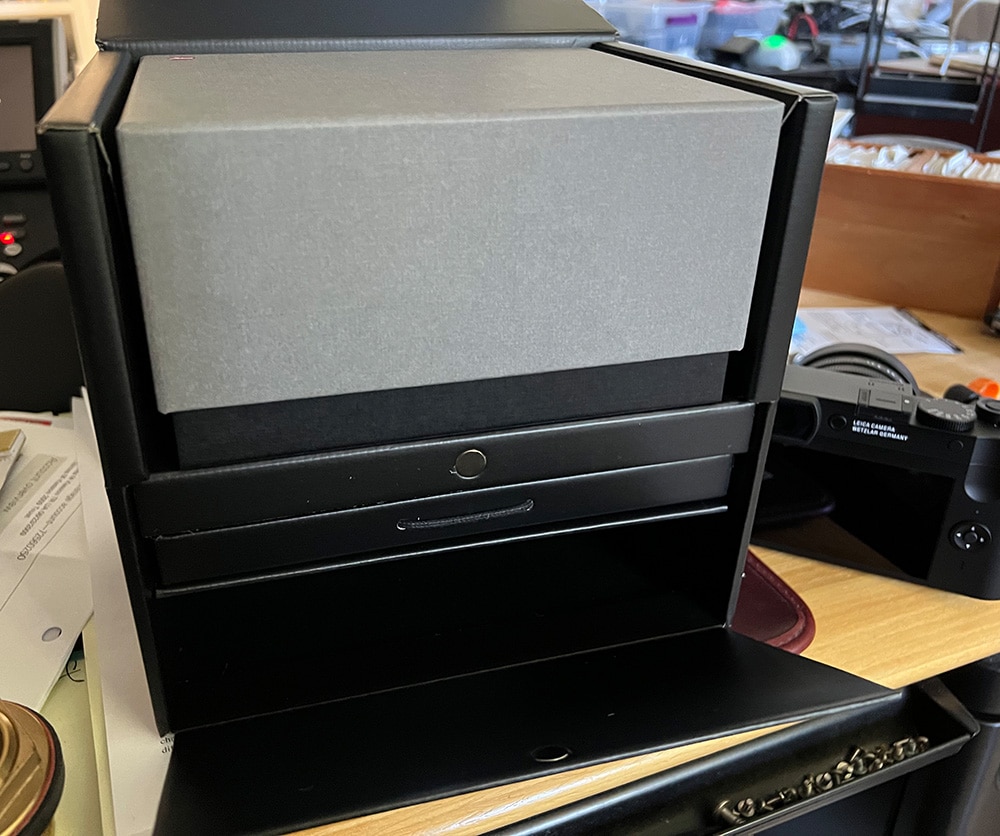 The box is heavy cardboard, and is held closed with magnetic buttons. The gray box on top contains the camera itself. The drawer below, with the elastic pull,  holds the paperwork. In the drawer below that nestle the accessories, each in a pouch: 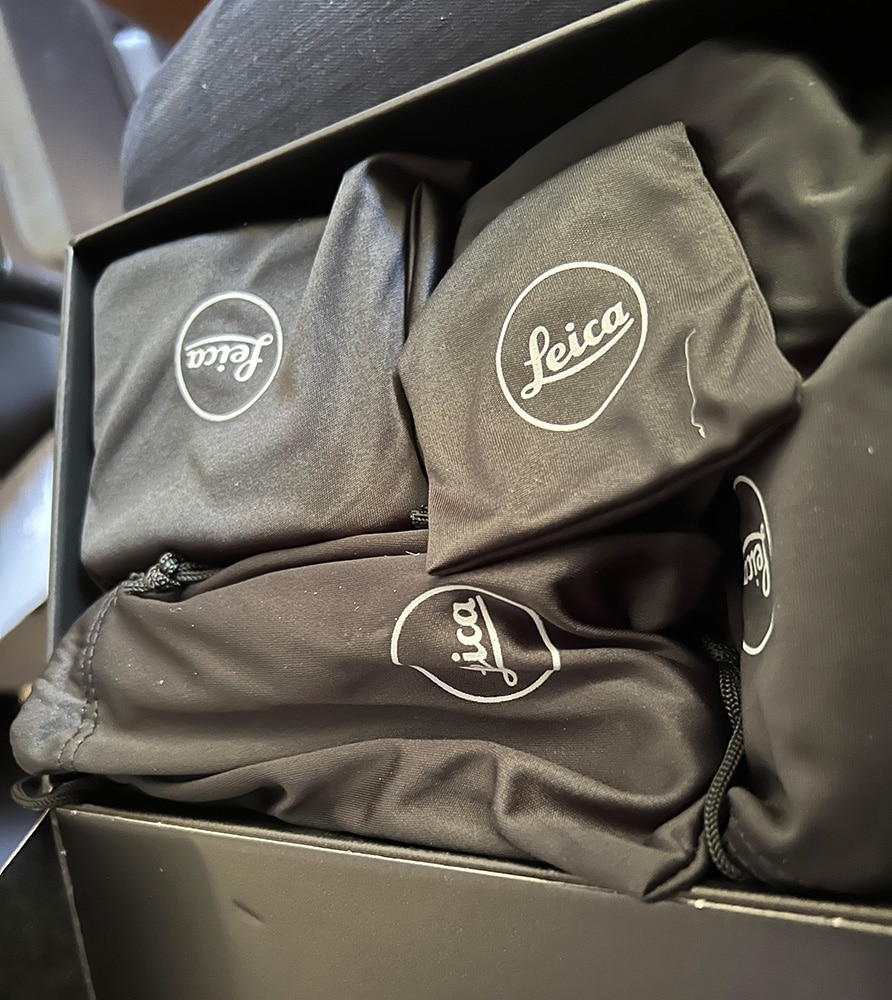 I think this packaging is a bit over the top. But it’s something we have come to expect with luxery goods, and the Q2 is certainly one of those. 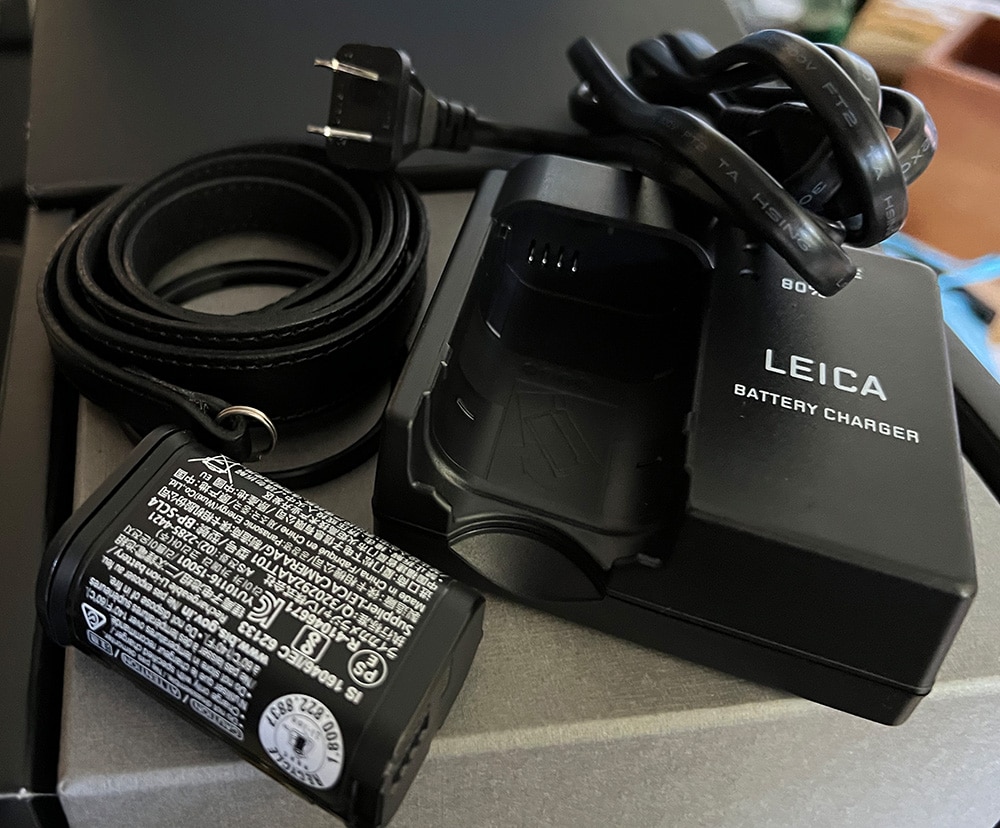 The camera strap is real leather, which is a nice touch. Unfortunately, it’s taken a set in the box, and forms a tangle when you set the camera down: 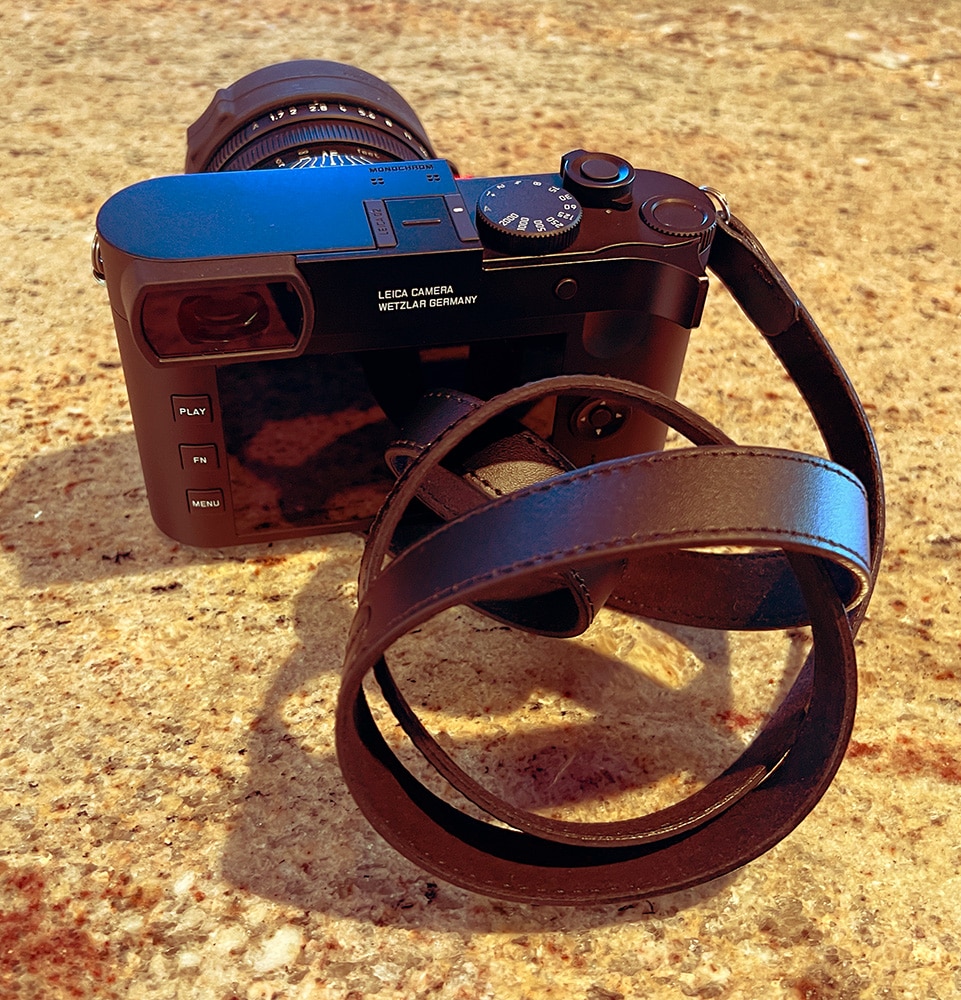 I think that will go away with time.

I installed the battery, and checked the charge. One bar. Enough to set up the camera. I did that. One of the ways I familiarize myself with a new camera is going through every menu item and seeing what the options are. The menu system is fairly spare. That’s mostly OK with me, but I do find the omission of the focus peaking sensitivity adjustment to be of concern. There were a couple of things that I needed help with. I couldn’t fine the eyepiece diopter adjustment. A web search solved that problem. It’s a button to the right of the finder that pops out when you press on it, and turning it adjusts the diopter. Then you press it back in, and it’s out of the way. Nice.

After setting up the camera, I tried to take the battery out to recharge it. I found the lever that unlocks it, but it only popped out about a quarter of an inch and pulling on it did nothing. I called my dealer, and was put right quickly: after releasing it with the lever, you have to press the battery part way back into the camera to unlock it. Then you can pull it out.

If you shoot raw, as I do, the camera has only one file format option — DNG. Not sure about compression, but from the size of the files, there appears to be very little, if any compression. Lightroom read the files just fine.