In the computer biz, OOBE (pronounced ooh-bee) is the experience the user has when first opening the product and using it for the first time. My FTZ arrived today, and I’m going to tell you about my OOBE.

The first thing I did was something a bit different from your average customer: I tried to measure the distance between the two flanges. I failed. It turns out that there’s a ring around the camera side of the adapter that sticks out and circles the flange on that side. There’s not enough room to get the flat of a micrometer seated properly, and that, combined with the different throat diameters, meant that I couldn’t make the measurement. I have a plan B, and I’ll let you know in a few days whether it works or not.

The second thing I did was mount an Otus 55 to a Z7 with it. When I turned the camera on, this is what I saw: 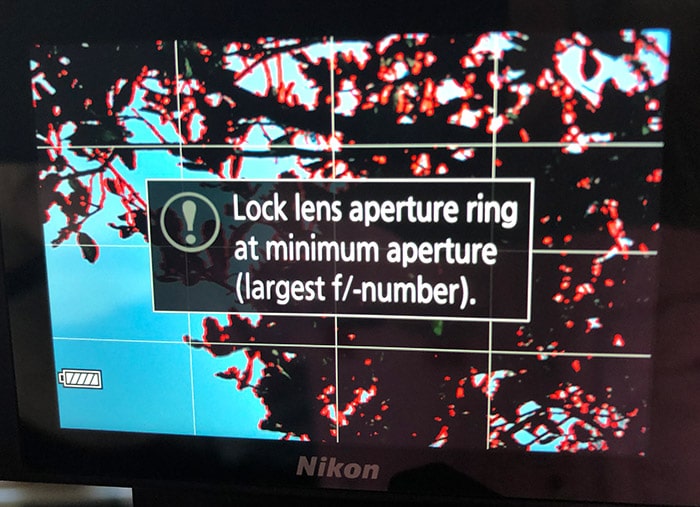 Oops! The lock on the Otus doesn’t seem to work right, and I couldn’t figure out how to make the error message go away.

I mounted an Otus 85, and the camera liked the lock on that one. I took a picture and looked at the EXIF. It had the f-stop of the lens and the taking f-stop. Score one for the home team. I tried manual focusing at maximum magnification. That was a pretty good experience. Not quite as good as with the Sony a7RIII, which has half the latency of the Z7, but definitely well beyond acceptable.

I took the lens that I have difficulty in focusing manually, the Nikon 500/4E, out of its suitcase, clipped it onto a tripod, and mounted the camera/adapter to it. Manual focusing was close to what it is with the a7RIII, which is no picnic — gosh that focusing ring is sensitive! The meatball is useless, though; it was indicating an in-focus image when the focus was unacceptably approximate. While I was at it, I snapped off a few shots in AF-S and AF-C. That seemed to go OK. I’ll do more AF testing later.

But the big news is this:

My difficulty in focusing the 24-70/4 Nikkor S precisely was not due to EVF latency at maximum magnification. It must have been caused by the focus-by-wire (FBW) algorithms. That’s good news because those can be changed in firmware (it took Sony a couple of go-arounds to get FBW dialed in).