I haven’t posted in the last few days. That’s not because I was taking time off from photo tech. It’s because I’ve been beavering away on how to measure and design color profiles. I’ve built more than 50 of them, learned a lot, found a few dead ends, and am finally reading to report my discoveries to you all. I did some of work with lighting with odd spectra, since that is where I think custom profiles have the most utility, but I’ll leave that for another post, partly because I would like to do some better instrumentation, and also because throwing that into the mix would make this post even more complicated than it already is.

A lot has been made of how to expose the target so that reflections and glare is not a problem. It is  possible to take this to extremes. You can build a box around the sensor, line it with black velvet, cut holes for the lens and the lights, and fire away. Or, if you’re using artificial lights, you could perform the target captures on a moonless night in the middle of a field, with the black velvet draped around the camera — and around you, if you don’t have a radio trigger. I figure that most photographers aren’t going to do their target captures that way, so I opted for a basic setup. I used two FlashPoint/Godox AD600Pro strobes, set to 1/64 power, which gave this spectrum:

The strobes get bluer as you turn them down. There is some peakyness, and the CRI is only about 98. I could do better with incandescent bulbs, but I’m never going to use them for real photography. I put a 12-inch parabolic reflector on one of the strobes, and a 6-inch snoot on the other, and lined them up at a 45-degree angle on opposite sides of the target. After I exposed the target, I shot a white card. Here’s what it looks like cropped to the field of view of the target: 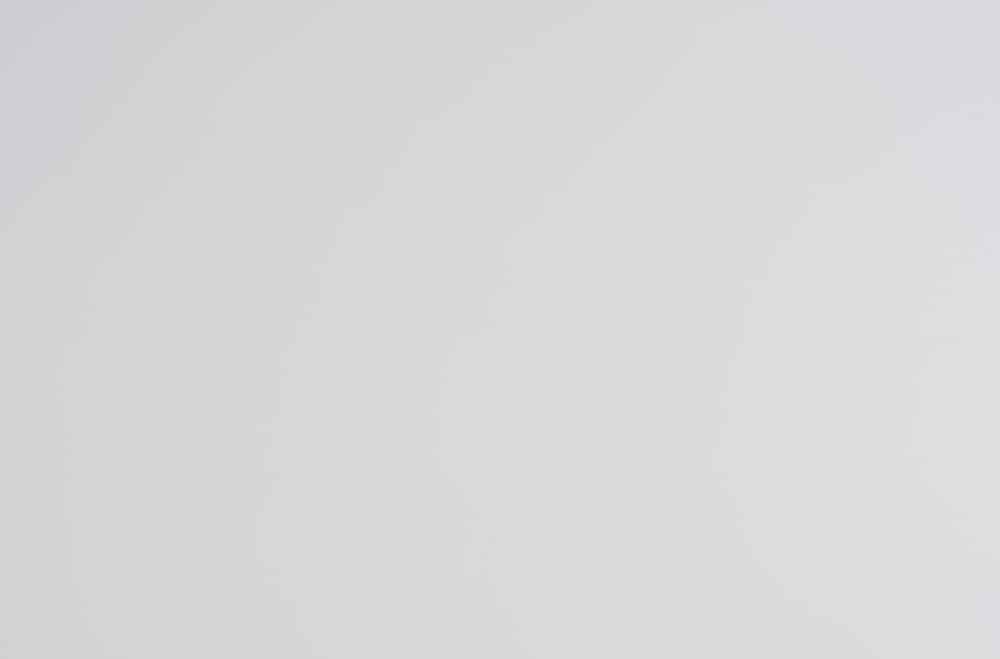 It’s only fairly even, but I was planning on using flat field techniques for making and measuring the profiles, so I wasn’t worried about that. 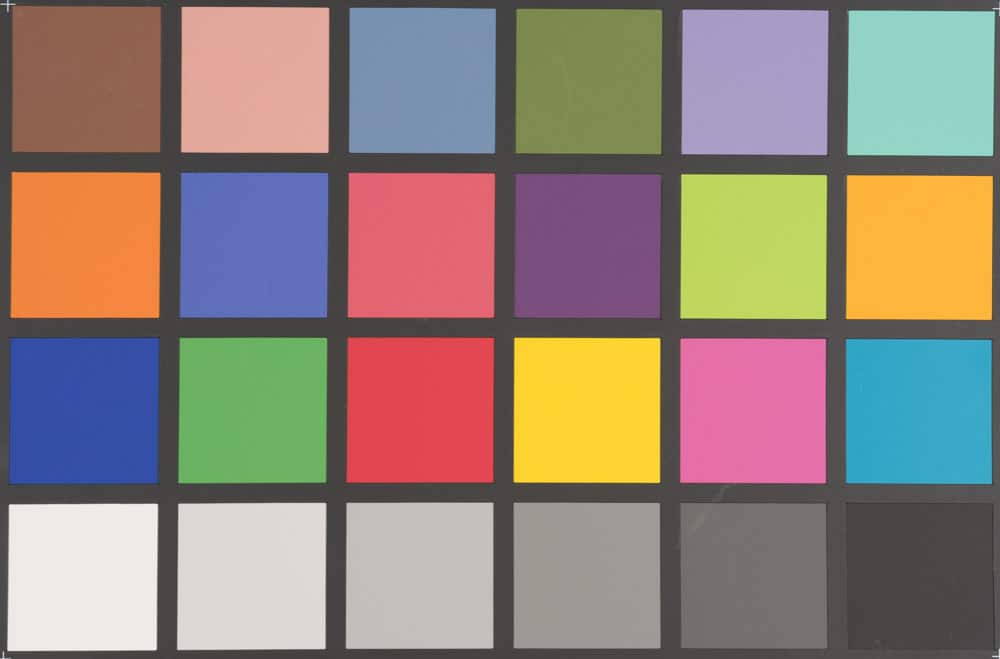 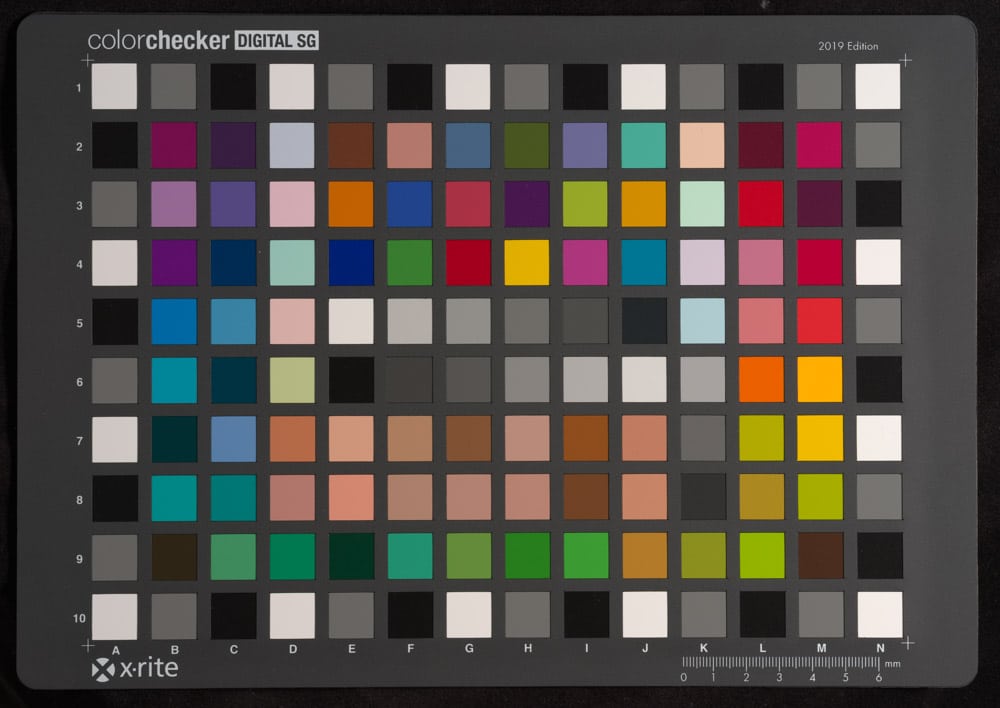 Both those shots are brightened up about two stops from the raw captures using Lightroom’s Process Version 1 to keep things linear; I was mainly concerned that there was no clipping at all in any raw channel. That doesn’t affect the profiling, since I built the profiles from DNG files that came directly from the raws.

I’m going to be presenting a lot of data, and I think it will help you deal with it if I list the questions that it’s supposed to help answer:

At the risk of scaring people off, I’m going to present all the data that we’ll be using for the rest of this post, together with a description of the rows and columns. If you are a seasoned color pro, this will be all that you need. If you’re not, don’t worry. You don’t have to understand it all. I’ll be going through the most significant data and giving you explanations if you scroll down further. 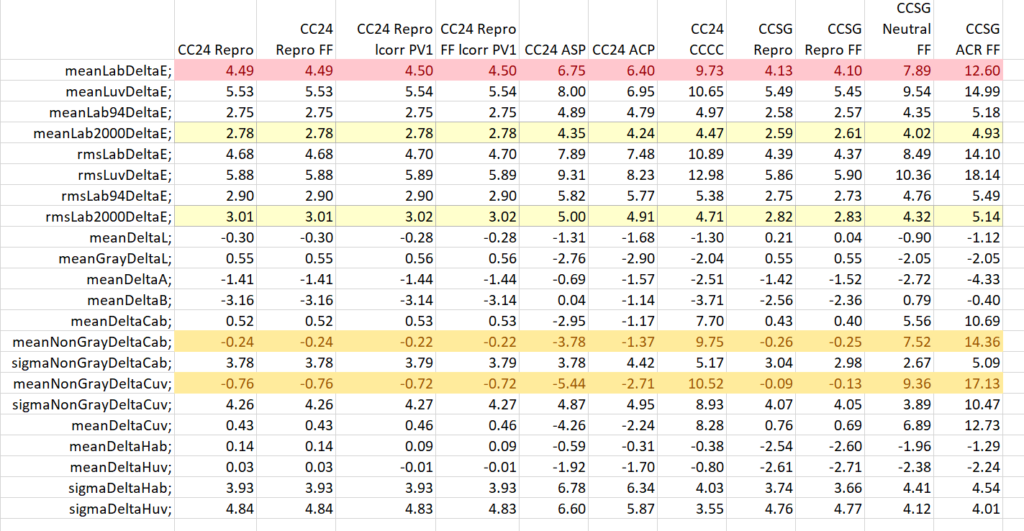 Here is a description of each of the columns:

In all cases, the profile measurements were determined using a shot of the CC24 target. Since the putative CC24 patches in the CCSG target aren’t the same as the ones in the real CC224 target, that means the CCSG-based profiles are evaluated with patches outside of the training set. The profiles that were based on CC24 shots were evaluated by a test set that is identical to the training set. That should give the CC24-based profiles an advantage. How much of one? We’ll see.

Mean Delta E is the average CIELab delta E. Since Delta E can never be negative, errors in one direction don’t cancel out errors in another.

Arguably, the best measure we have for color accuracy is the mean CIELab 200 Delta-E: 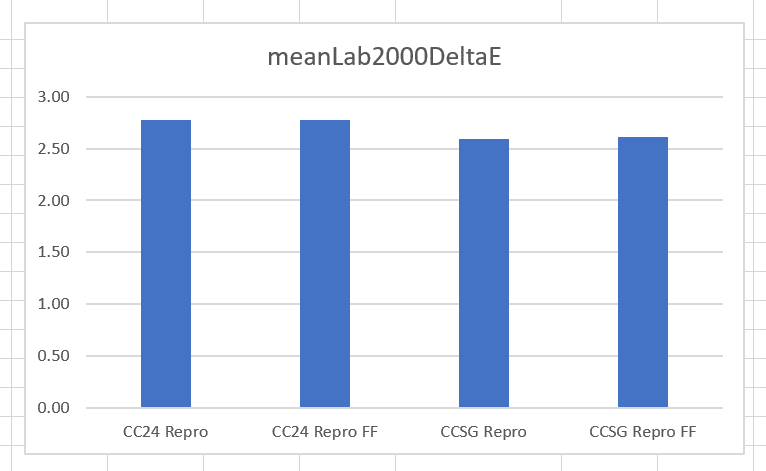 You can see that comparing the first two and the last two bars, that using the flat field corrections in LumaRiver Profile Designer doesn’t help much. In the case of the CCSG target, it actually makes things fractionally worse. The reason it doesn’t help with the CCSG target is that that target has white patches sprinkled throughout, so that clever profile builders — and LumaRiver is one of those — can take advantage of the built-in clues for filed flattening, and a second exposure is unnecessary.

By comparing the first and third and second and fourth columns above, we can see that using a CCSG target produces slightly better profiles when using a CC24 for profile testing than does using a CC24 target. This is surprising to me, since none of the evaluation patches are in the training set if we train with a CCSG target. An interesting question that comes to mind is: how much improvement in the entire CCSG patch set conversions is produced by using the CCSG target. I would expect that to be more, but there’s only one way to find out, and I hope to be able to do that experiment later. 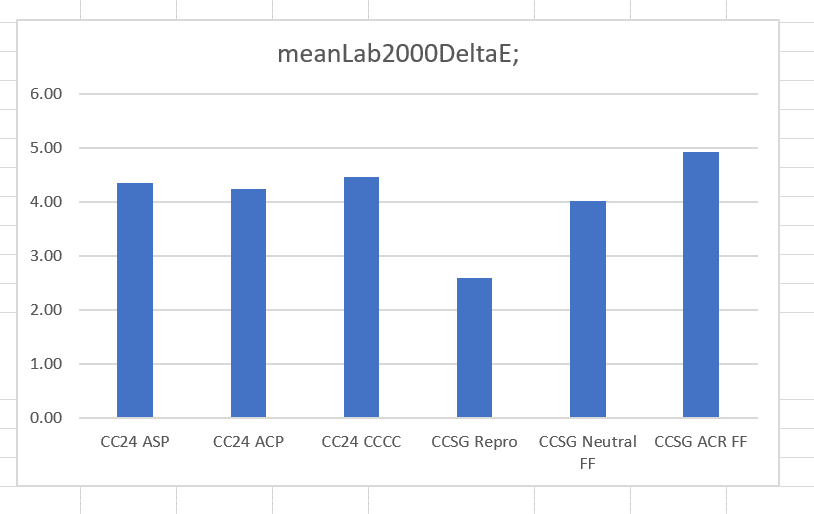 The reproduction profile is the most accurate. The next four are very close, and the ACR curve LumaRiver profile on the far right is marginally the worst. Adobe Standard Profile and the new adobe Color Profile are very close, with ASP being ever-so-slightly more accurate, which is the opposite of what I’ve seen previously. The Color Checker Camera Calibration (CCCC) profile is not much less accurate than the two Adobe profiles.

Now for this one: 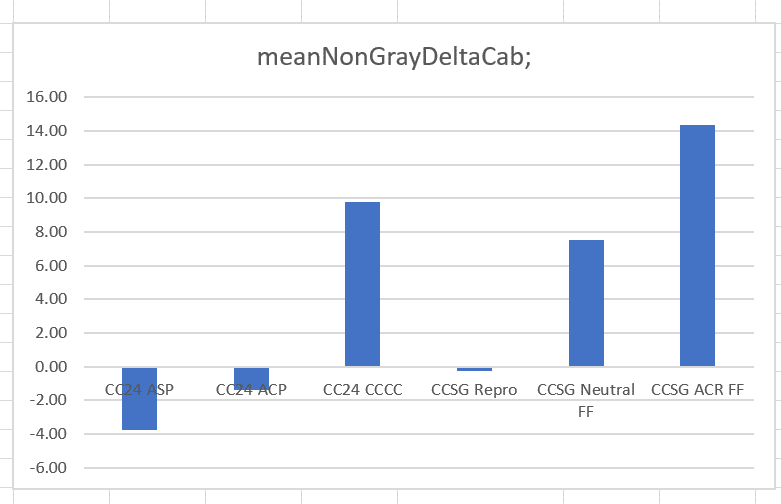 The reproduction profile is, on average, chromatically accurate. The two Adobe profiles under play chroma, and the other three over-amp it. It is surprising to me how much deviation of mean chroma error is possible among profiles that are not greatly dissimilar in Delta-E 2000.

Now let’s look at the direction of the chromaticity errors, in CIE a* and b*. First, with the LumaRiver-generated reproduction profile, using the CC24 target: 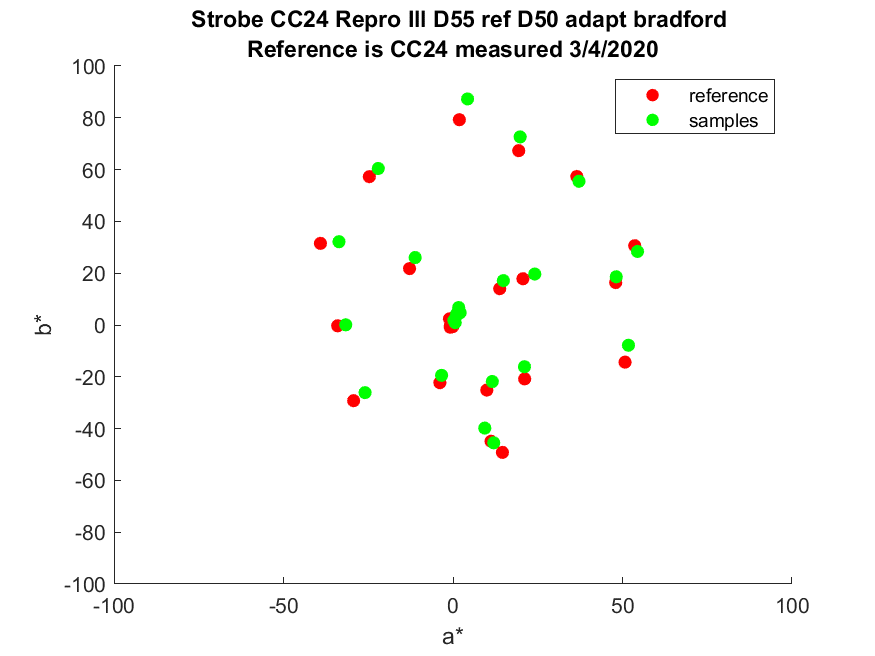 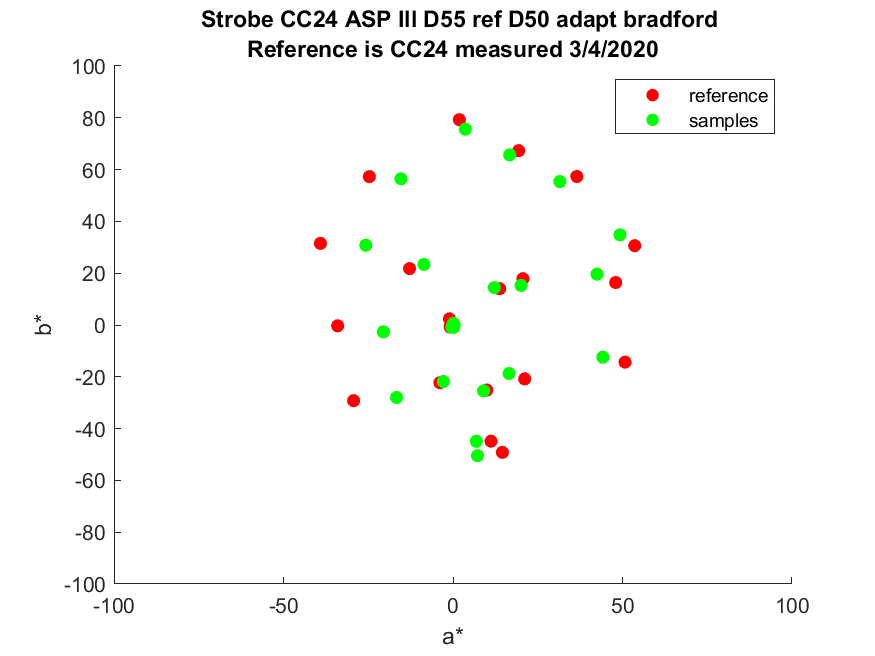 There is a tendency towards undersaturation that is most pronounced in the reds and cyans. Flesh tones are slightly undersaturated. There is a yellowish patch with a pronounced shift away from cyan. There’s a shift in the blues away from magenta, which is almost certainly by design. 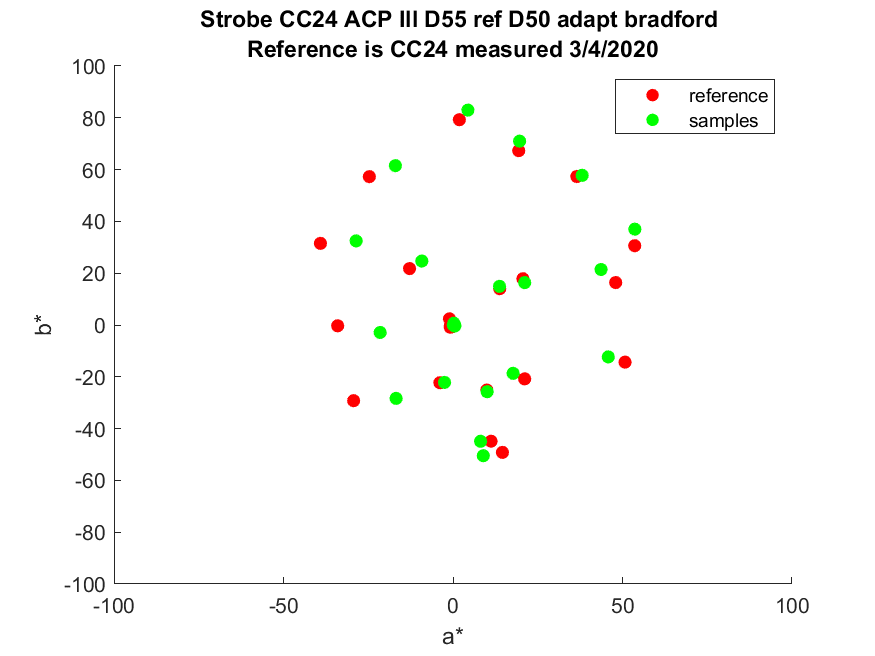 Skin tones are almost bang on. There’s a shift in the blues away from magenta, which is almost certainly by design. It’s really quite similar to ASP. 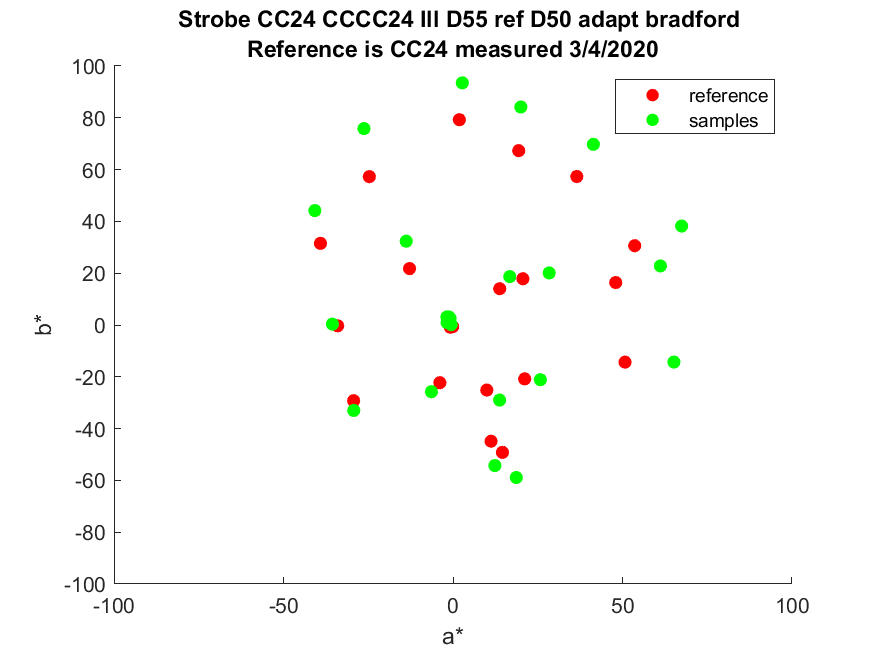 Not much oversaturation in the cyans, but a lot everywhere else. Caucasian skin tones are markedly shifted in the red direction.

The following profiles were made from the CCSG patch set. First, the LumaRiver reproduction profile, which is the most accurate of all the ones I’m showing you today: 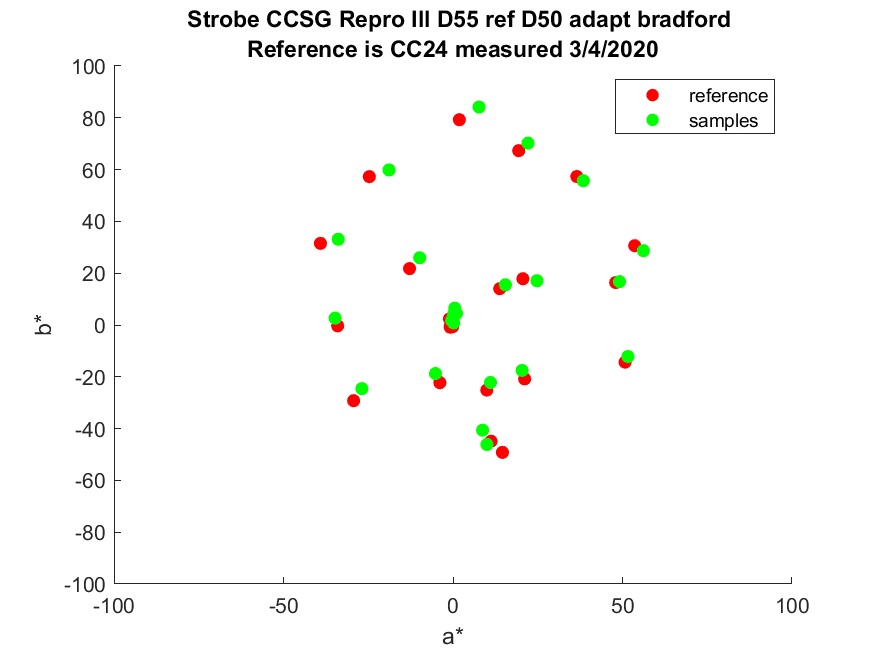 I’ll show you the CC24 one again so you can compare more easily:

They are quite similar. 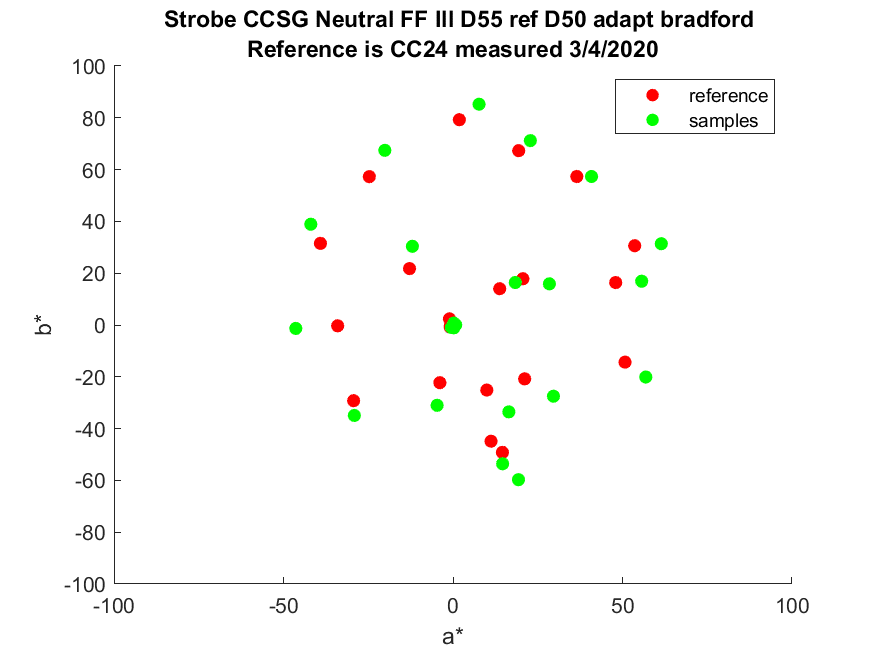 Note the overall tendency towards oversaturation.  There is a slight shift in the blues towards violet, which could be  a problem in some sky images. 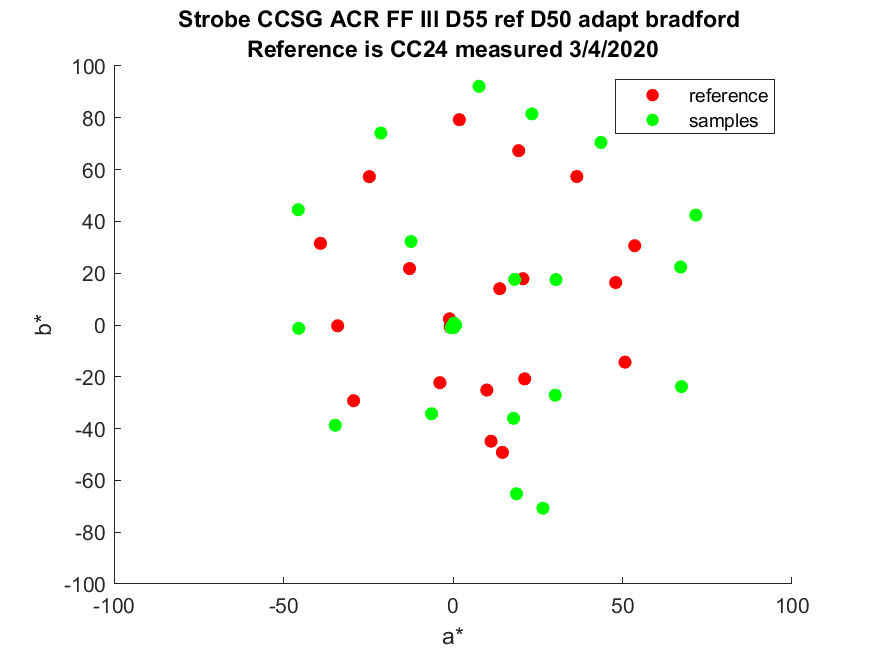 It’s even more saturated, and the blue to violet shift is even greater.

We can see the differences with respect to saturation by plotting the CIELab chromaticity metric for each patch set: 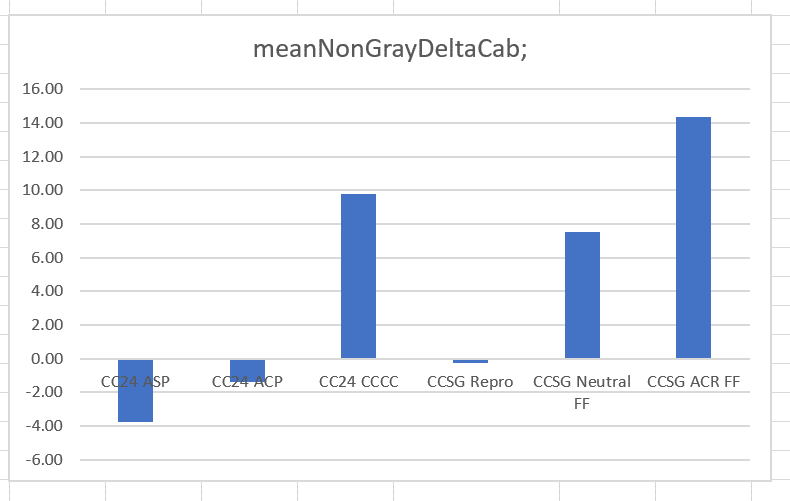 Not surprisingly, the LumaRiver reproduction profile is the best, with the two Adobe profiles somewhat undersaturated, and the X-Rite CCCC and the two general-purpose profiles being quite oversaturated.

Warning — nerds only past this point.

This is mainly for Iliah Borg, but may be useful for anyone who realy wants to dig around under the covers of the test-image flat-fielding that I’m doing. Assuming that lower numbers are better than higher ones, which is not true for all of the rows, here is the improvement that I get for all of the profiles when I flat-field the sample images rather than just taking then at face value: 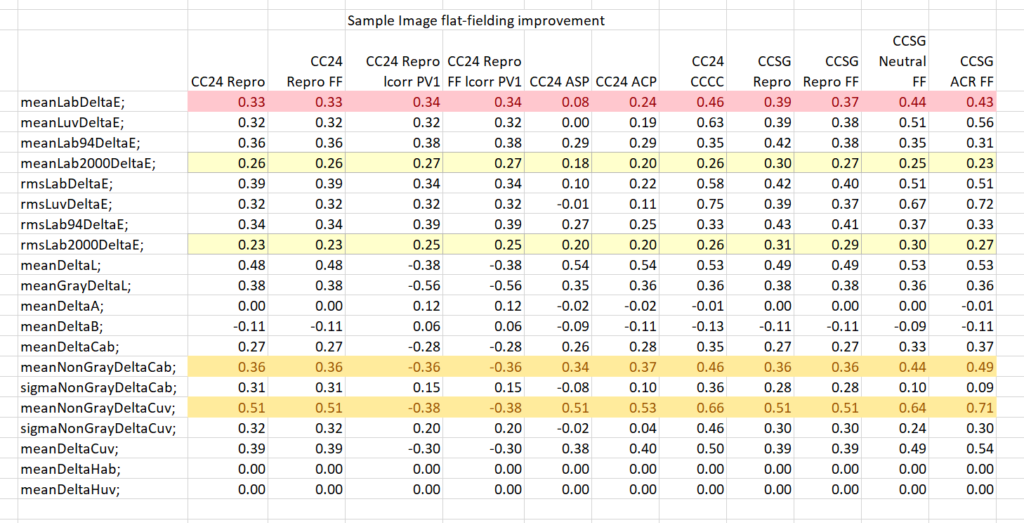