I’ve been using Sony’s Imaging Edge program to assemble the 16-image pixel-shifted stacks from the a7RIV. There is a control called Peripheral Edge NR that can be set between 0 and 1. The default is 0.5; that’s what I’ve used for all the shots I’ve posted up to now. To get an idea of what this control does, I looked at tight crops of the Siemens Star from this image:

The effect is fairly subtle, but higher amounts of edge noise reduction cause blurring of the finest detail as well as reducing the noise there.

I looked at the slanted edge in upper left of the target to see if there was an overall softening of large steps:

Only a tiny amount. The Edge Noise reduction effect is nonlinear.

You can see it better if I plot all three MTF’s in the same chart: 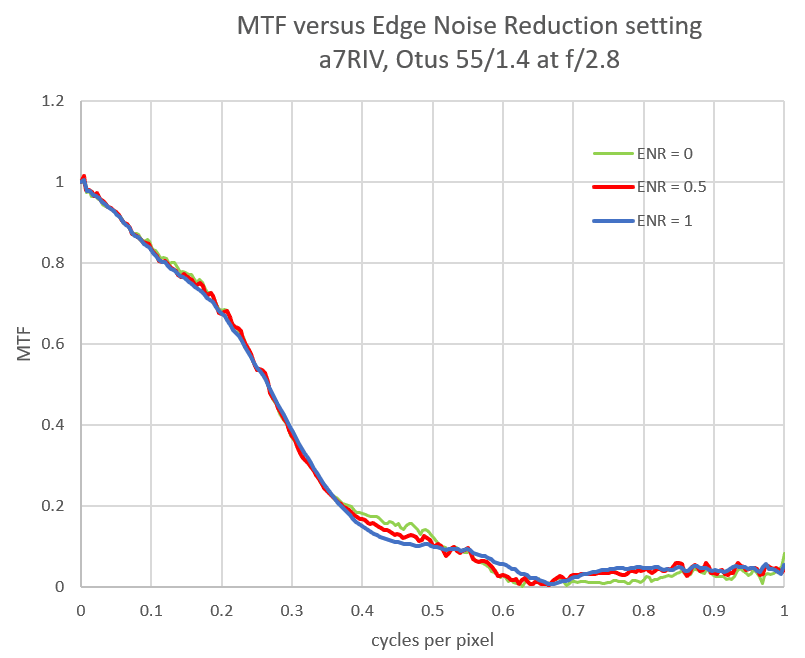 Let’s take a good look at the above MTF curves. The horizontal axis is cycles/pixel of the double-sized (244 megapixel) file that Imaging Edge spits out. That file has an effective pixel pitch of 1.9 micrometers (um). If we were to restate the curve in terms of the original pixels in each raw file, 0.5 cycles per pixel — the Nyquist frequency — would occur where 0.25 cycles per pixel is in the above graphs, and the MTF at that frequency would be about 0.6. Even with the Otus lenses, that is clearly higher than could be achieved without some sharpening. The undershoot also indicates sharpening. In the past, Imaging Edge horribly oversharpened the 4-shot pixel-shift sets from the a7RIII. The amount of sharpening that it is using now is more appropriate.

Note the low MTF at the Nyquist frequency in the above graphs. This indicates that the images will be resistant to aliasing, as we have seen in the visual results I presented earlier, and in the Siemens Star images above. I think this is due to the 3.8 um microlenses on the a7RIV, which give an effective fill factor of 400%.