For the most part, so far in my slanted edge testing of GF lenses on the GFX 100S, i’ve been, ahem, focusing on MTF50 as my main metric for sharpness. However, I’ve recently begun branching out to look at the entire MTF curve as a function of defocusing. That means the results are three dimensional, which makes them a bit tricky to display. After some experimentation with 3D surface plots, I’ve settled for now on contour plots, which aren’t as pretty, but make it easier to get the information out. 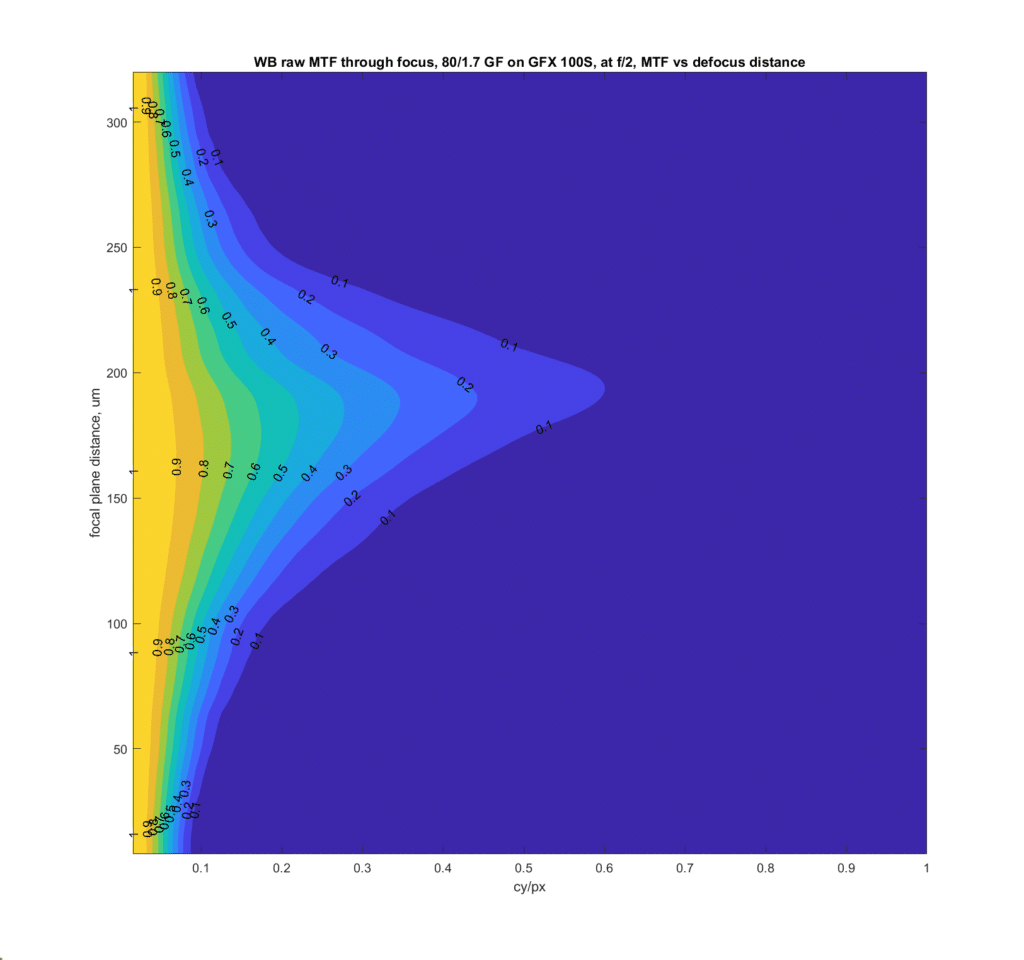 The horizontal axis is spatial frequency in cycles per pixel. Half a cycle per pixel is the Nyquist frequency, which is the highest spatial frequency the camera can properly capture. The vertical axis is the position of the plane of focus on the sensor side of the lens, or, as the cognoscenti like to say, in the image field. The starting position is arbitrary, and the units are micrometers. For the bottom part of the graph, the camera is front-focused, and for the top part, it’s back-focused. The contours are modulation transfer contrast levels, from 0.1 (MTF10) through 0.9 (MTF90).  MTF10 is 10% contrast.

The contours are approximately, but not precisely, symmetric about the point of best focus. If you look closely, you’ll see an interesting anomaly; more on that in the next post.

Now let’s look at the 110 mm f/2 GF lens at the same magnification and f-stop: 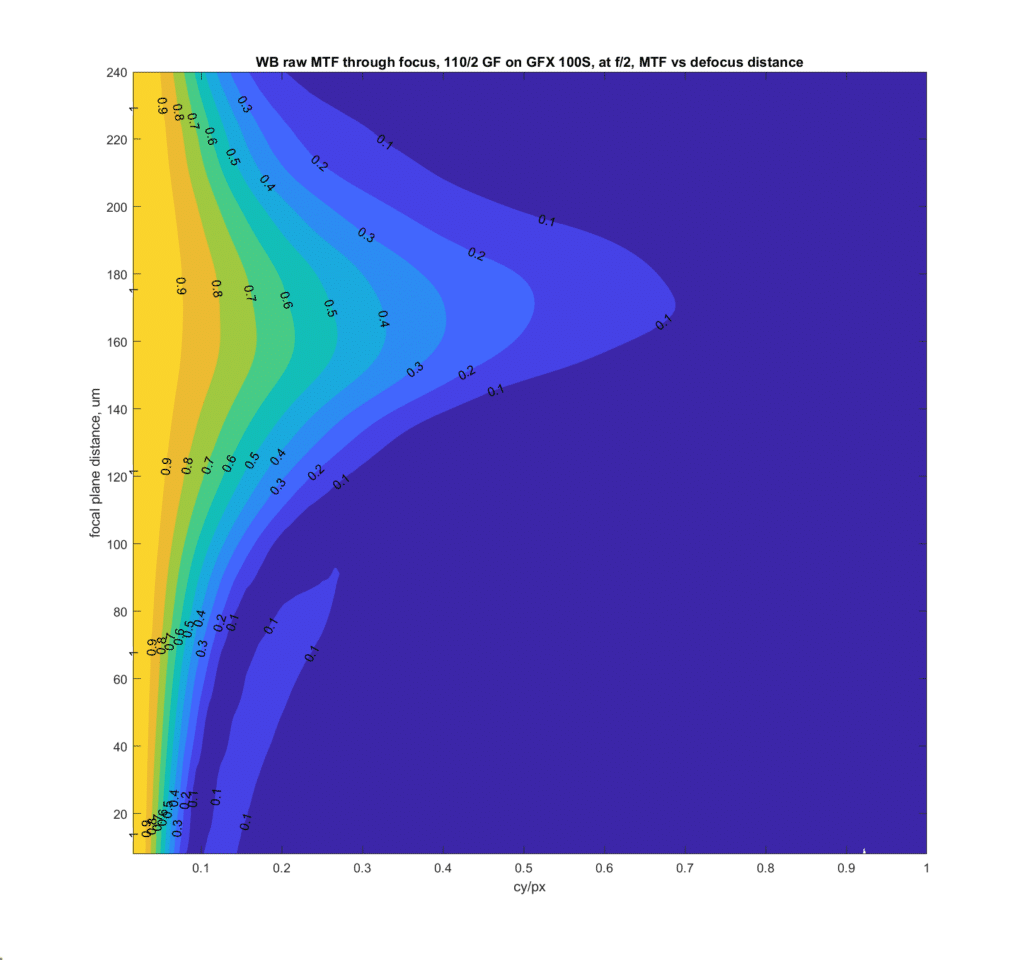 At low MTFs, there is quite a bit of asymmetry here, to the point where the MTF at a constant spatial frequency is not a simple Gaussian looking haystack, but has ripples when the camera is front-focused.

Stopping down a stop: 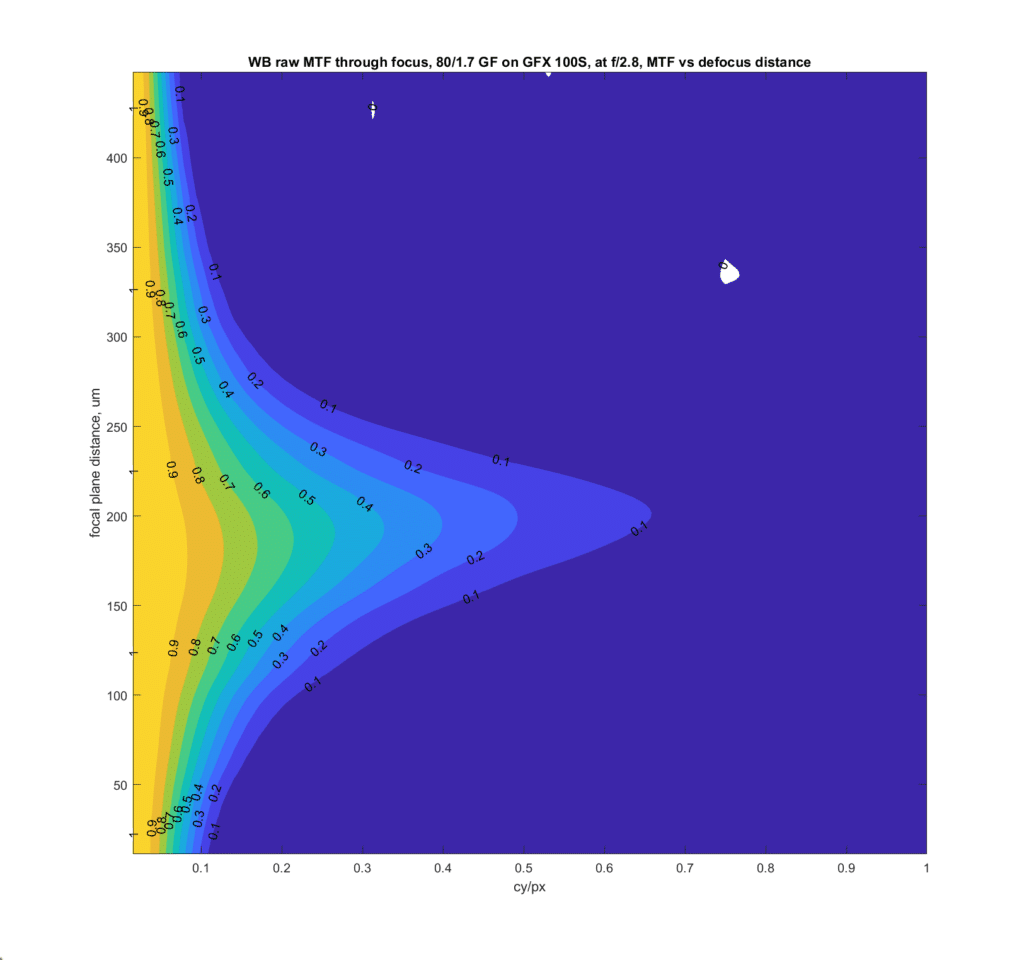 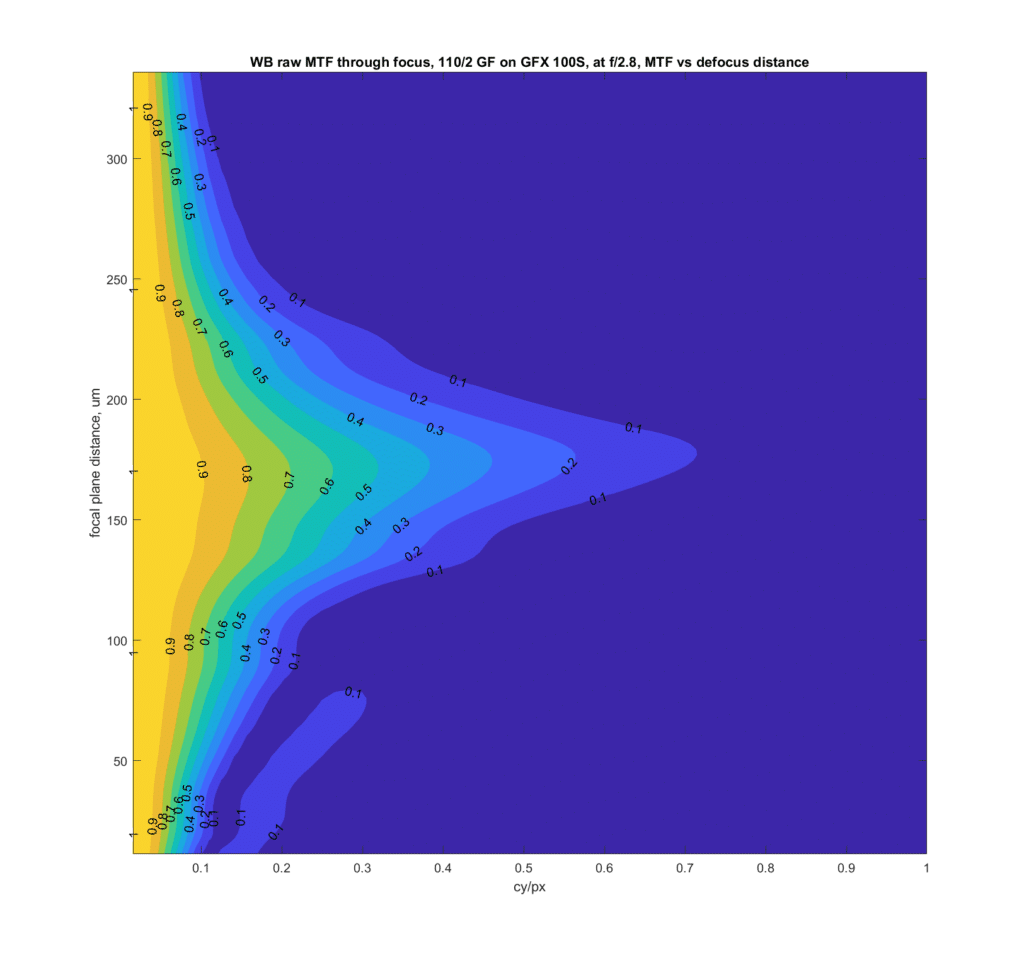 The 110 still has some strange behavior at low contrast. 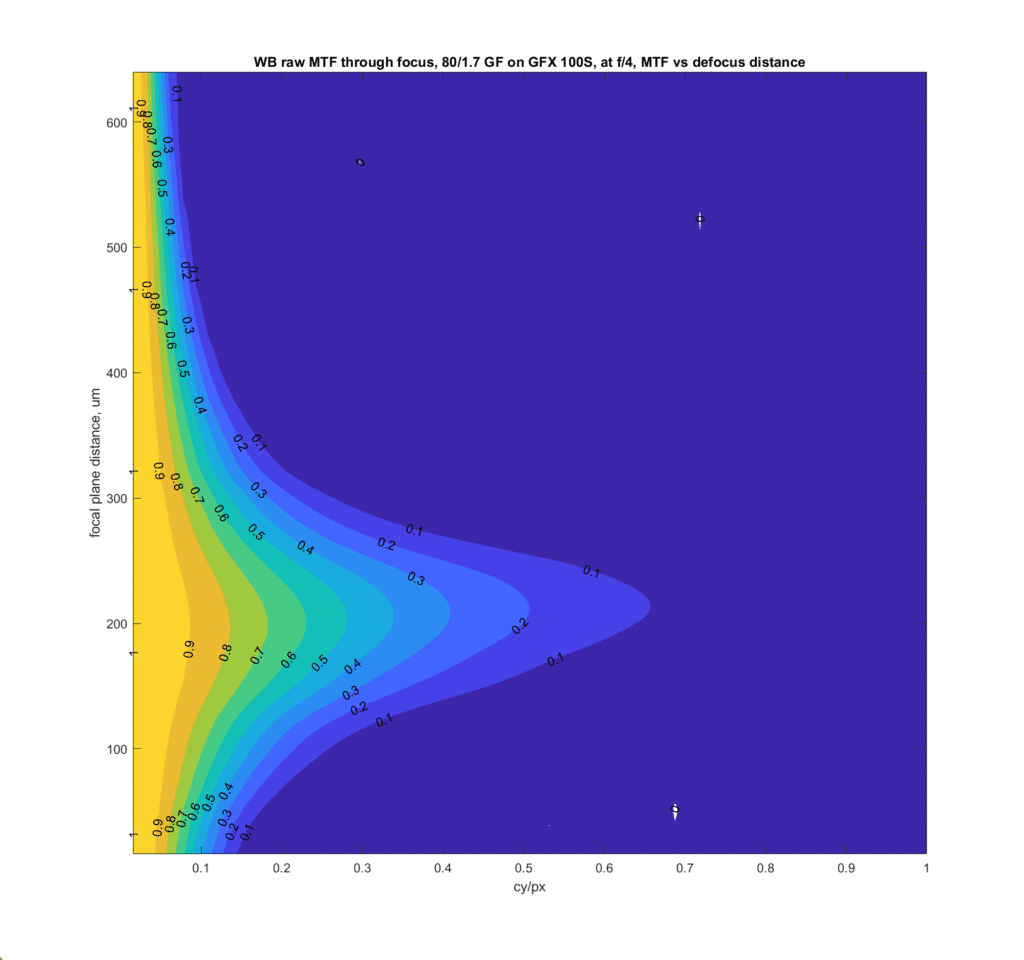 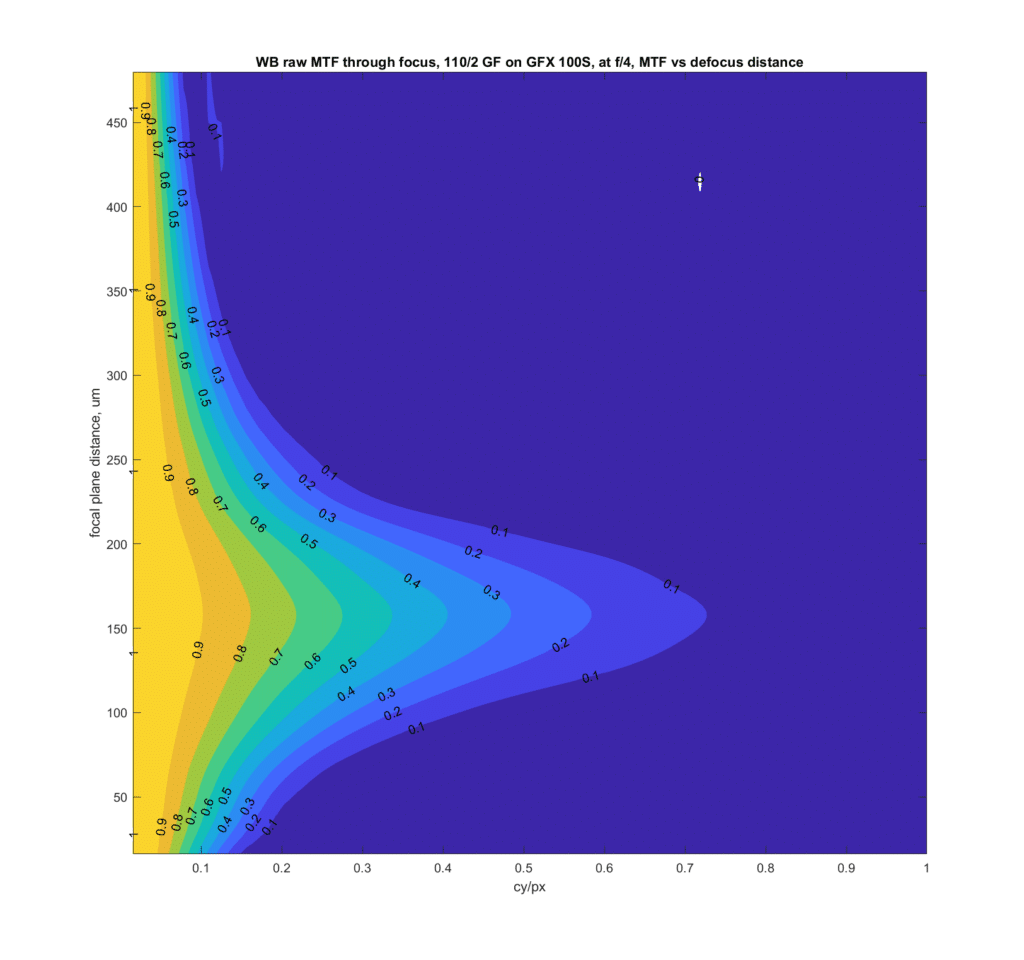 Now things are looking more like the ideal case. The 110 still has ripples on the back-focused side, and would presumably have them on the front-focused side were the camera further defocused at the beginning of the focus bracketed series.