I’ve been continuing to refine my low-contrast slanted edge testing. I’m not ready for a comprehensive explanation and report, but it is still my intention to test all the the Fujifilm GF lenses on axis. But I did notice something today that I think may interest people. The 110/2 GF and the 80.1.7 GF aren’t peas in a pod. We knew that already. The 110 is better corrected, and sharper. The 80 has more LoCA. Is there anything else that systematically distinguishes the two?

Turns out there is.

It’s the way that the depth of field falls off in front of and behind the in-focus subject.

A picture — or in this case, a graph — is worth a thousand words. Cast your eyes on this one: 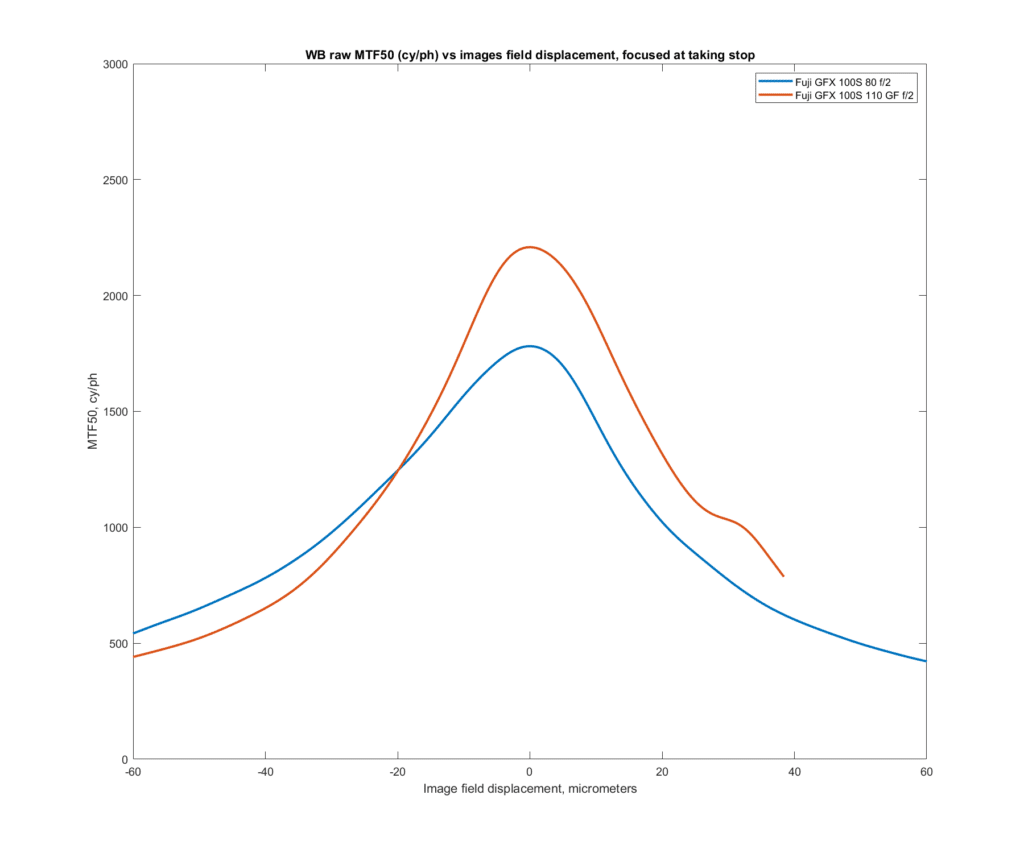 You are looking at the white-balanced raw MTF50, measured in cycles per picture height, versus the displacement of the image field from the point of best focus, where that point is defined as the place where the WB  MTF50 is the highest. The displacement is measured in micrometers (um), in the image field (on the sensor side of the lens). The target distances were selected to give the same magnification for both the 110 and the 80 mm lens. Negative displacement indicates that the lens is front-focused. Positive displacement means that the lens is back-focused.  Ignore the hump on the right side of the red curve; that is the result of the GFX 100S focus bracketing system momentarily getting confused.

Theres is something strange about the blue curve for the 80 mm lens. It falls off more rapidly than you’d expect when it is back-focused, and slower than you’d think when it’s front focused.

Of we normalize the vertical axis of the curves to their peaks, we can see this even better: 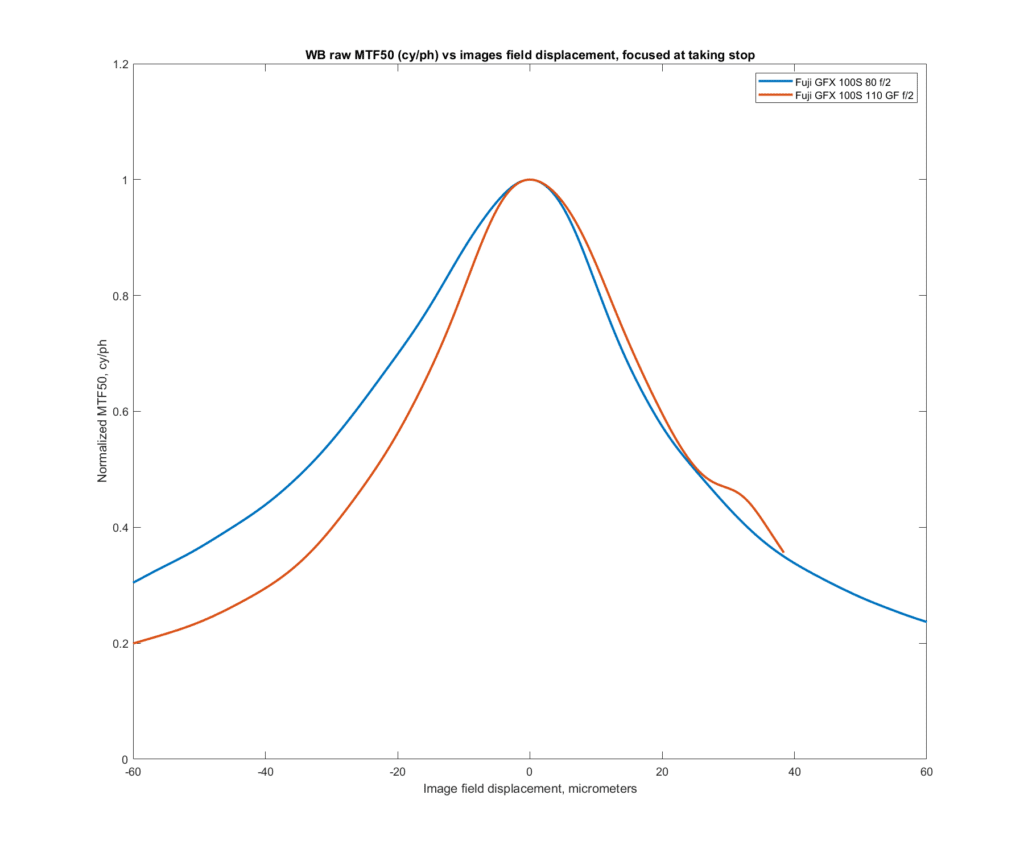 How much of this is related to longitudinal chromatic aberration (LoCA), which the 80 posses in large amounts? We can take most of the LoCA out of hte picture by just looking at the raw green channel: 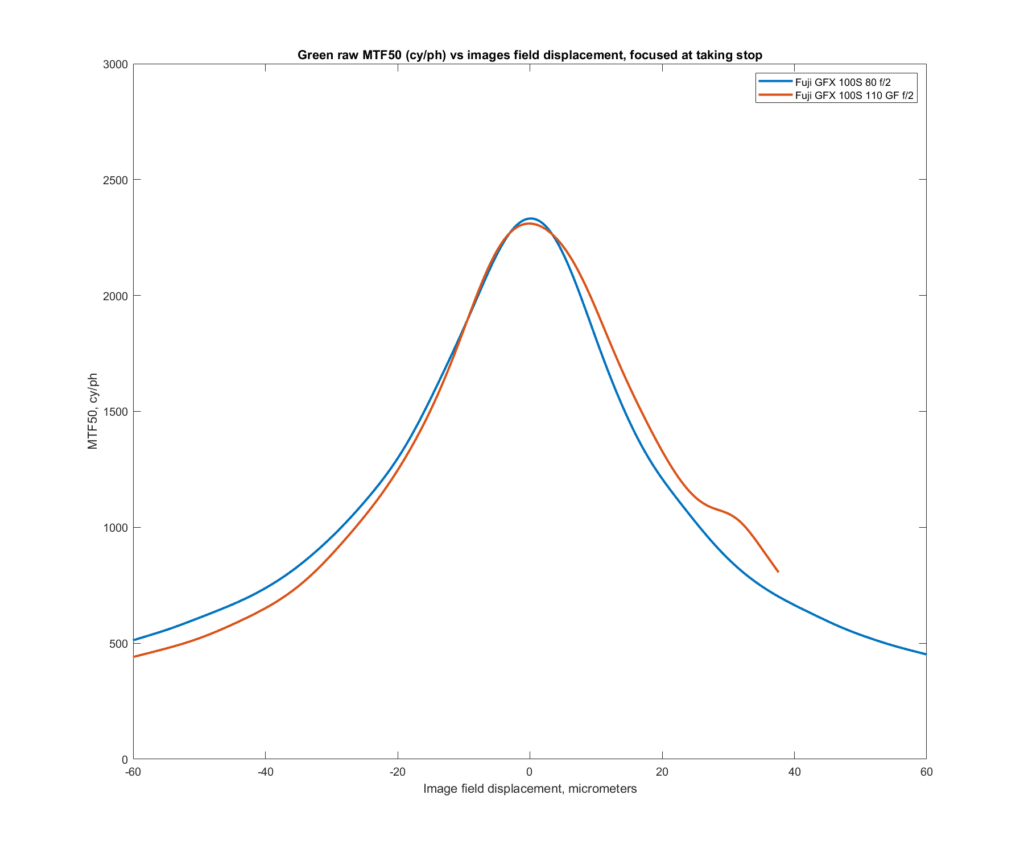 Well, that’s quite a surprise! The 110 isn’t any sharper than the 80 for green light. The front-focusing/back focusing differences remain, but are far smaller in green light. 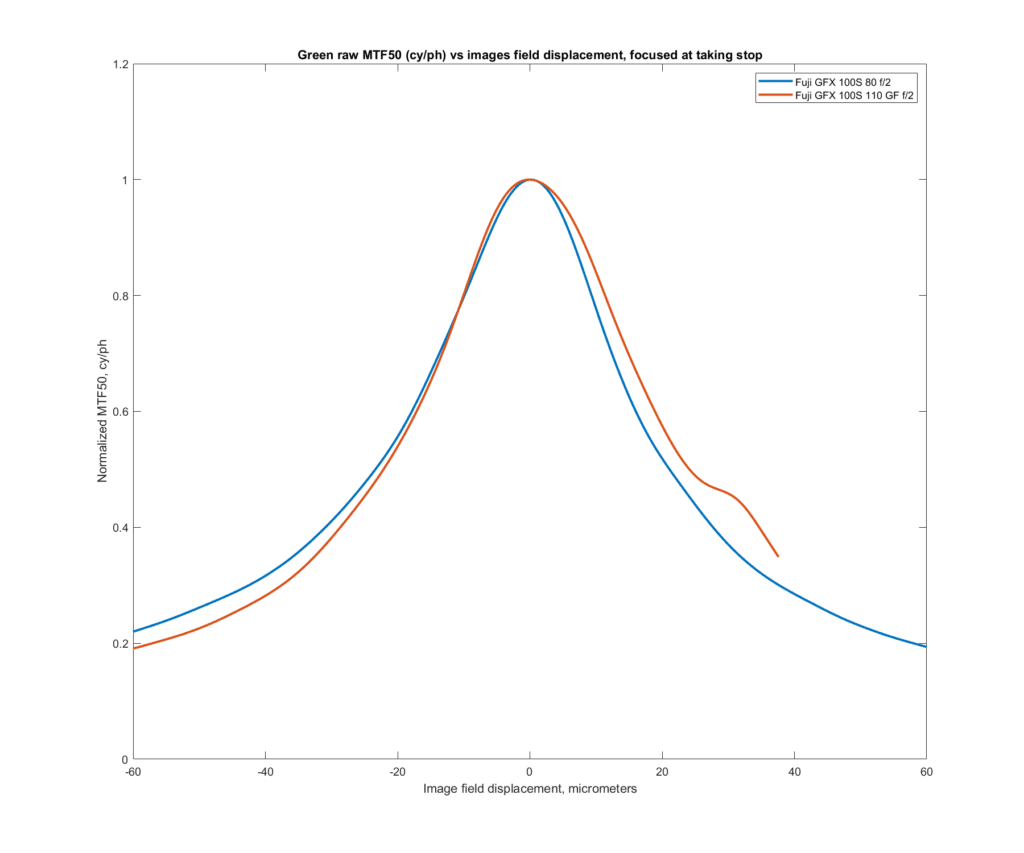 Now for the red raw channel: 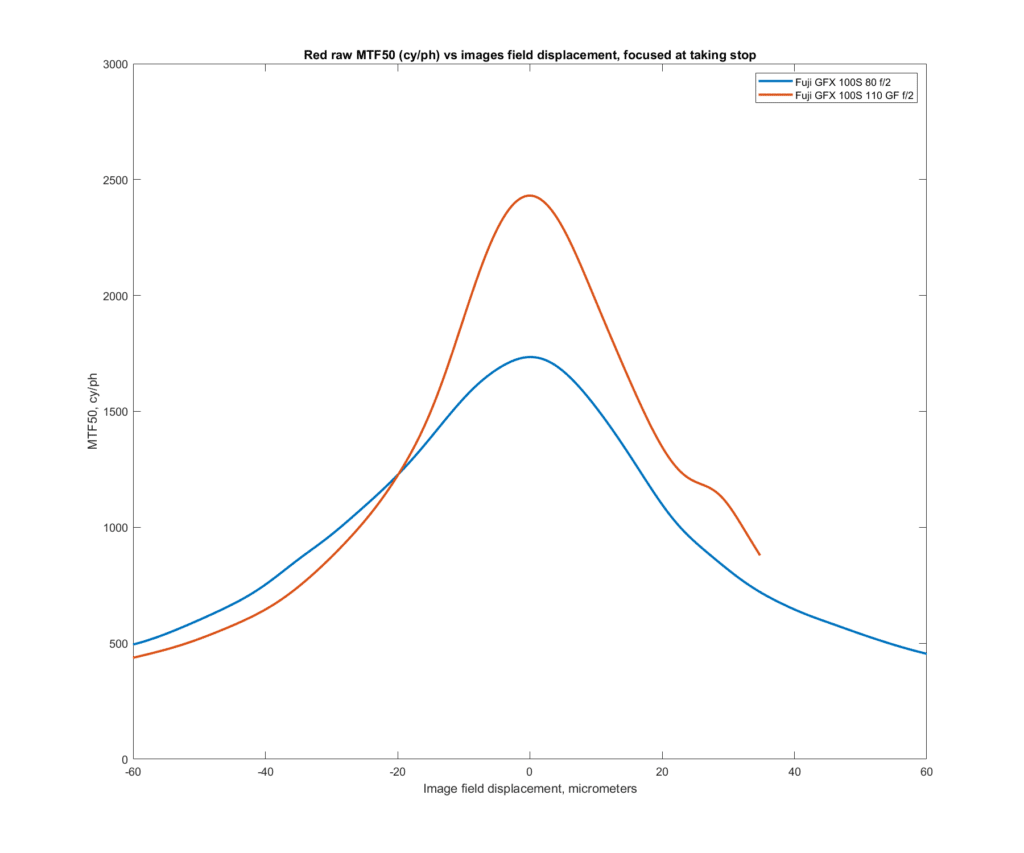 Not only is the 80 subject to LoCA (which you can’t see in this plot), it just doesn’t image red light nearly as sharply as the 110. 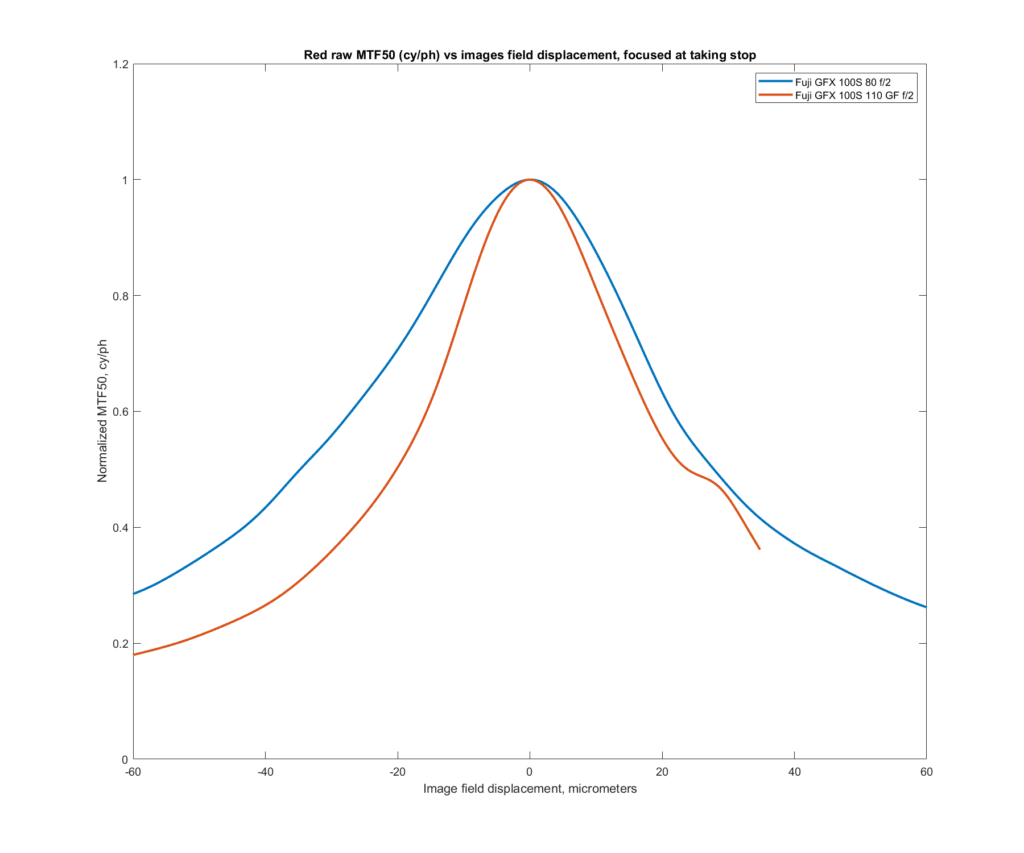 The asymmetry of the 80 mm lens’ DOF falloff on either side of the focus plane is much greater for red than for green light.

For the blue raw plane: 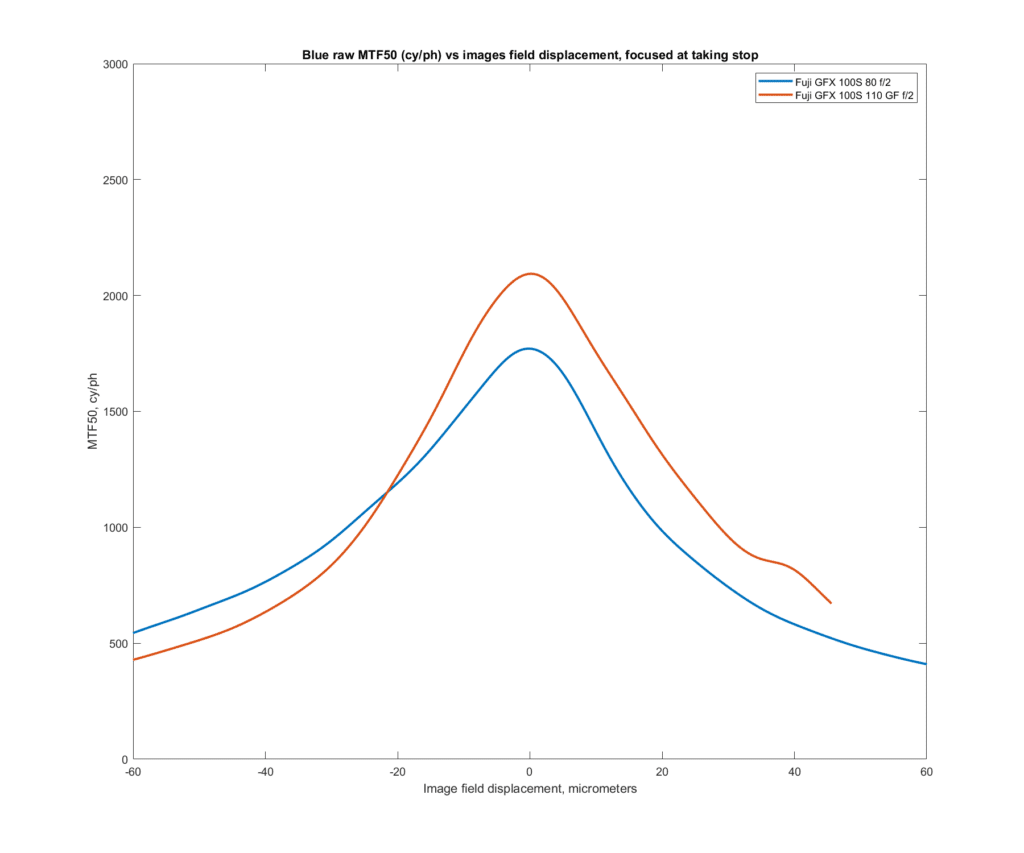 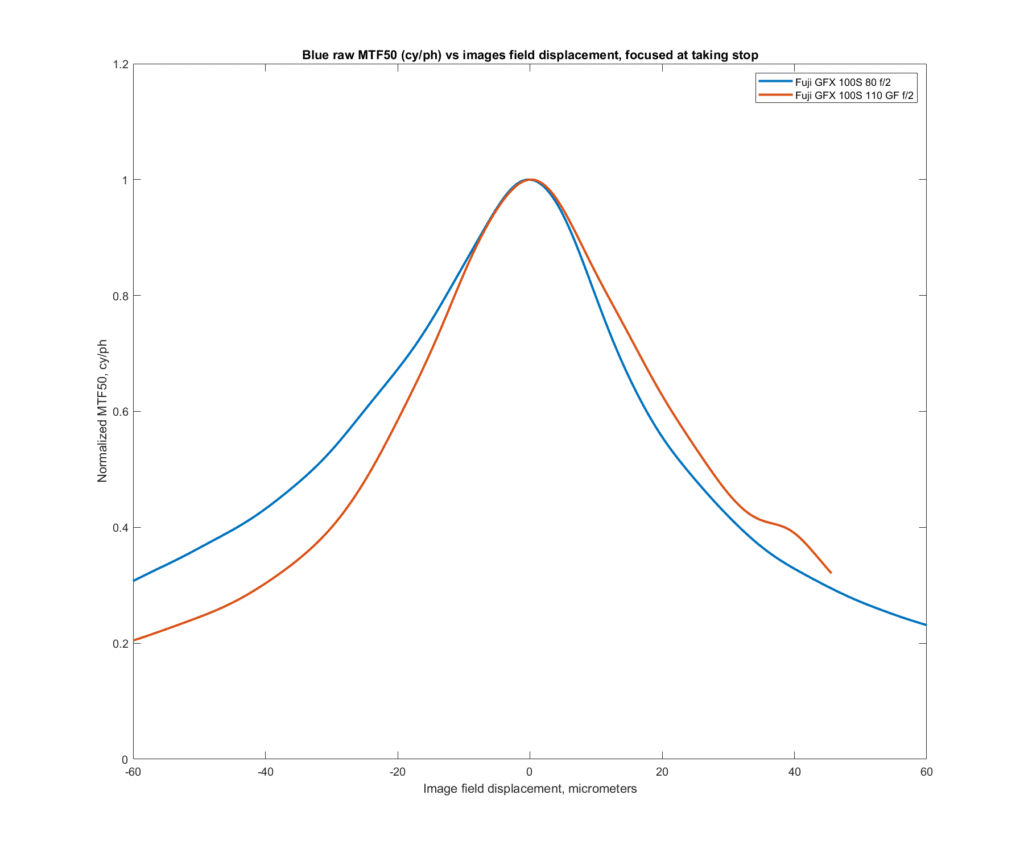 Greater DOF when the 80 mm lens is front-focused than when it’s back focused.