This is the 34th in a series of posts on the Hasselblad X2D 100C camera and the XCD lenses. You will be able to find all the posts in this series by looking at the righthand column on this page and finding the Category “X2D”.

In the previous post, I noted that the X2D 100C has more noise for long exposures than the GFX 100x under similar, but not identical conditions. The longest exposure that I considered was 30 seconds or the GFX and 64 seconds for the X2D. I decided to make as close to an apples to apples comparison as I could.

I made two exposures.

I analyzed the images using RawDigger, and calculated the raw channel engineering dynamic range (EDR), which in this case I’m defining as full scale over the rms noise (the standard deviation of the noise), using a 600×600 pixel center crop. 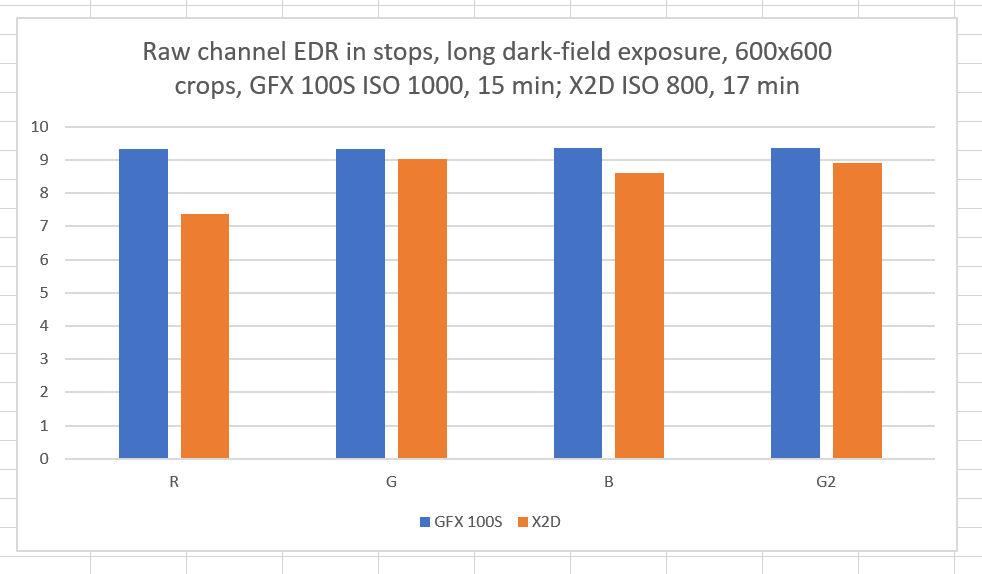 The GFX has better EDR.

But I noticed something else. The black points for the raw channels are different: 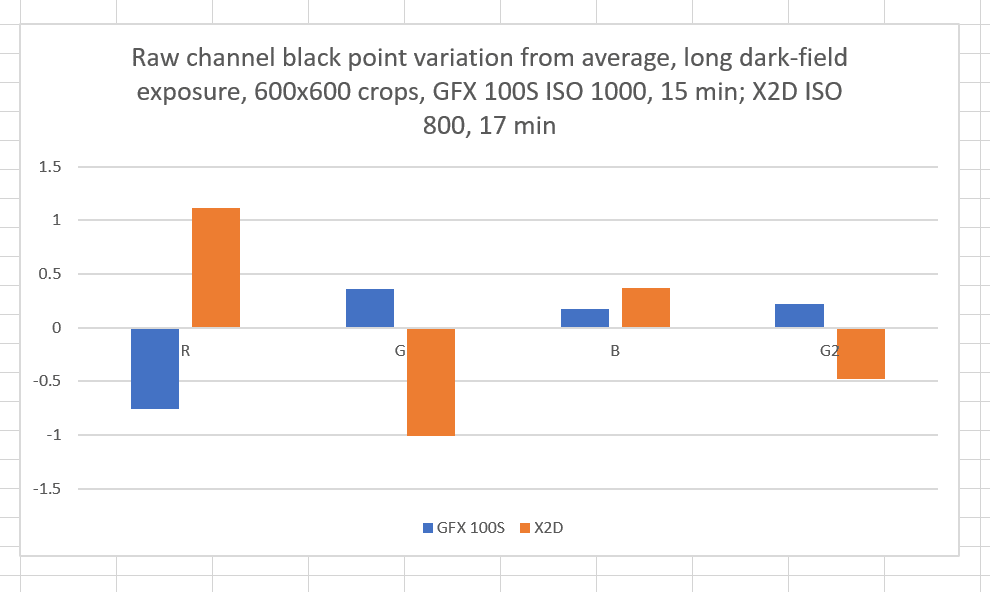 That’s interesting. If the XCD is doing pixel by pixel calibration, you’d expect the average black points to be the same for all the channels.

I brought both images into Lightroom, applied an 8-stop Exposure boost, set the sharpening and the noise reduction to zero, set the white balance to daylight, and took a look.

The red cast predicted by the black point number above is obvious. I think the lighter arc on the left is the result of a light leak.

I think the light area at the bottom left is amp glow. That seems not to be present in the X2D image. The fact that the GXF 100S sensor is a four-shot stitch in fabrication is evident. The X2D sensor is also a four-shot stitch (it’s the same sensor), but the blending is performed more artfully.

Looking at two halves side by side: 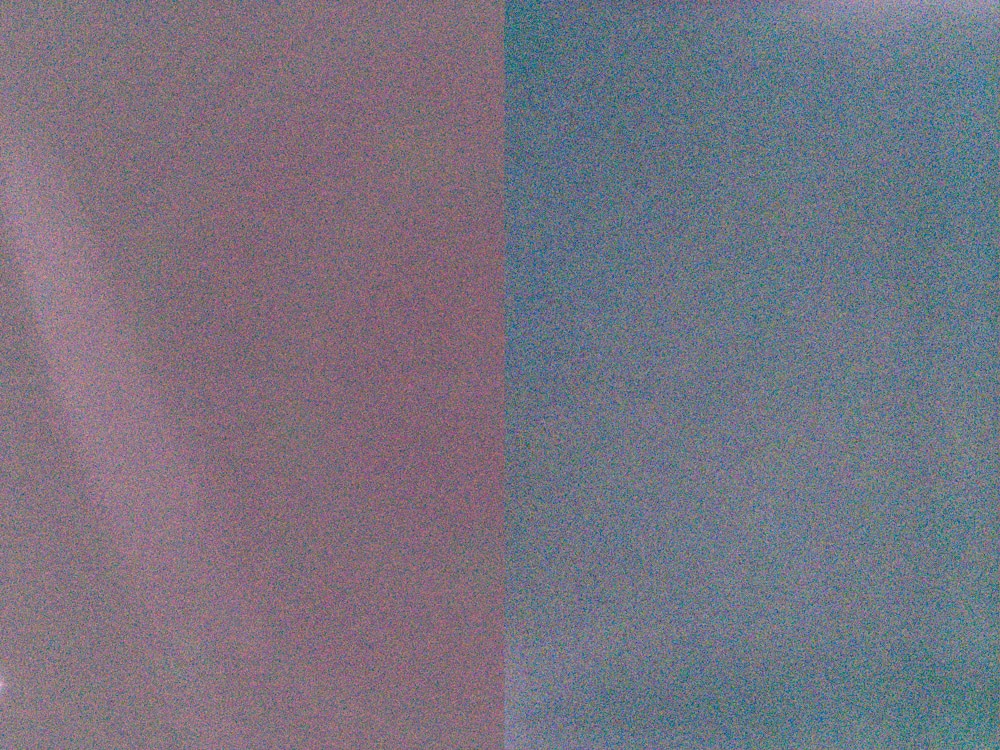 Why is the X2D noise so much worse than the GFX 100S? I think some of it is that the X2D switches to high conversion gain at ISO 200, and the GFX 100S switches at ISO 500. The GFX 100S has less noise at high ISO regardless of the shutter speed. 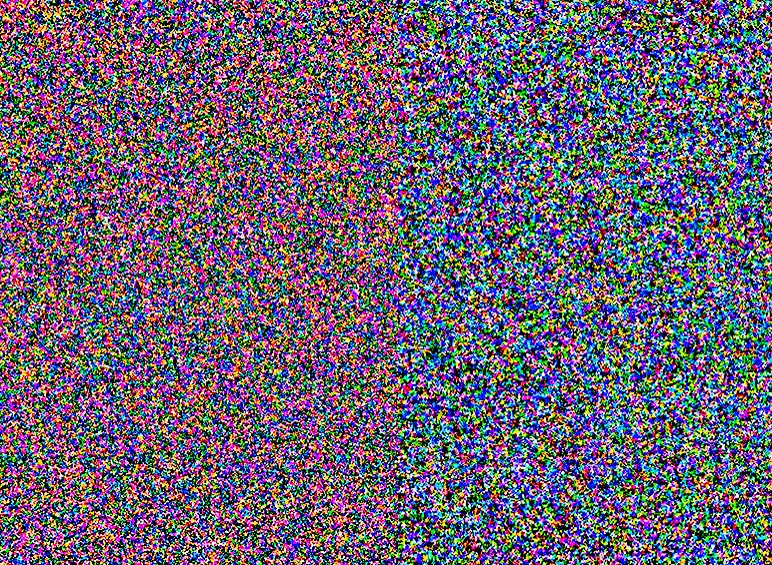 Let’s look at the above in black and white: 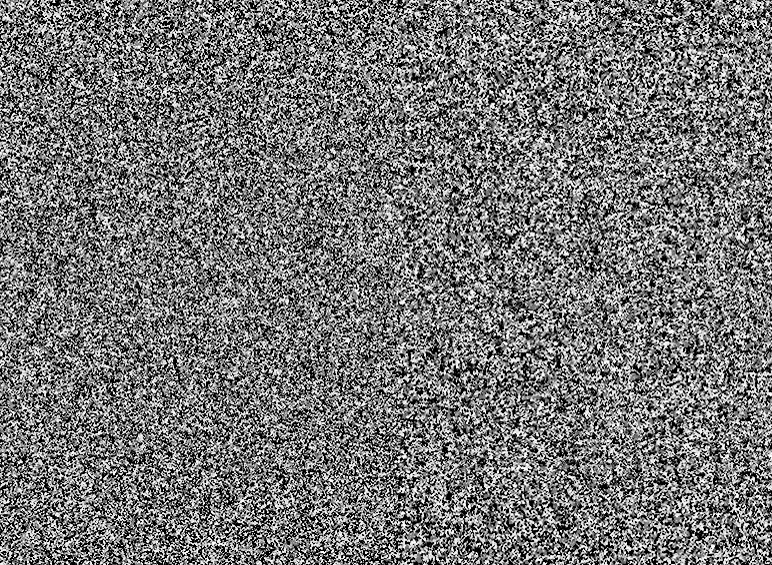 The GFX 100S noise appears to be coarser spatially. The difference may be due to the X2D’s calibration.