The Fujifilm 30 mm f/3.5 lens plugs a big hole in the G-mount prime lens stable, sitting as it does between the 23 mm and 45 mm lenses. In terms of landscape mode vertical angle of view, it’s the equivalent of a 22 mm f/2.5 lens. It has been anticipated eagerly by the GFX community, and started shipping this week. My copy arrived today, and I wasted no time setting up my lens screening test.

Here’s the scene, with a low-contrast Siemens star target: 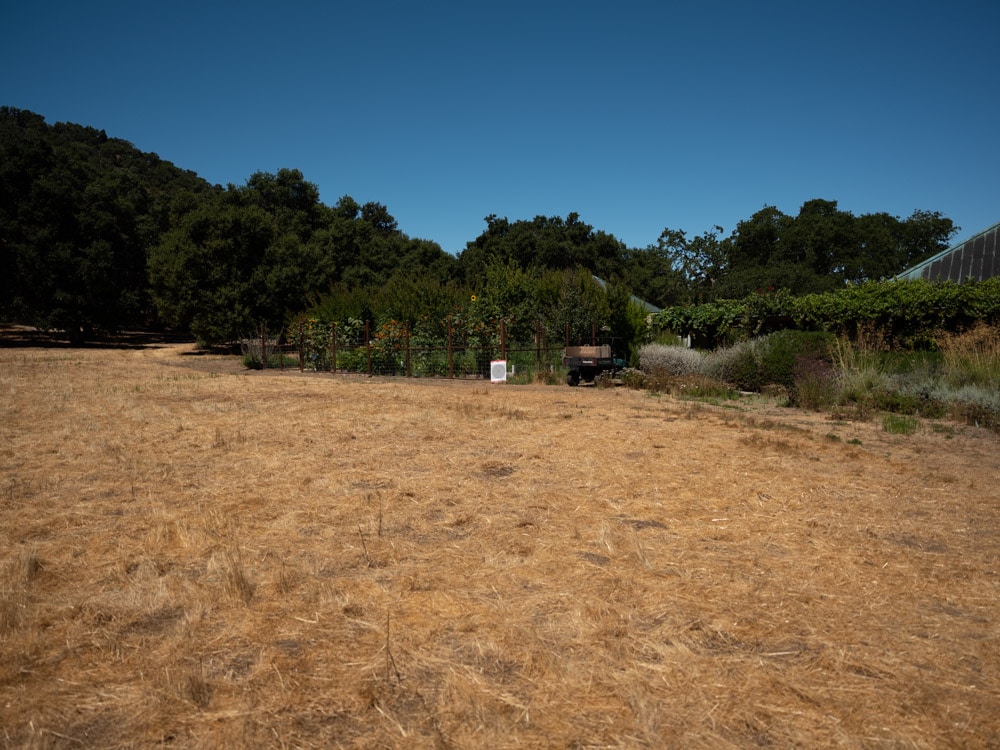 The results, at 200% magnification: 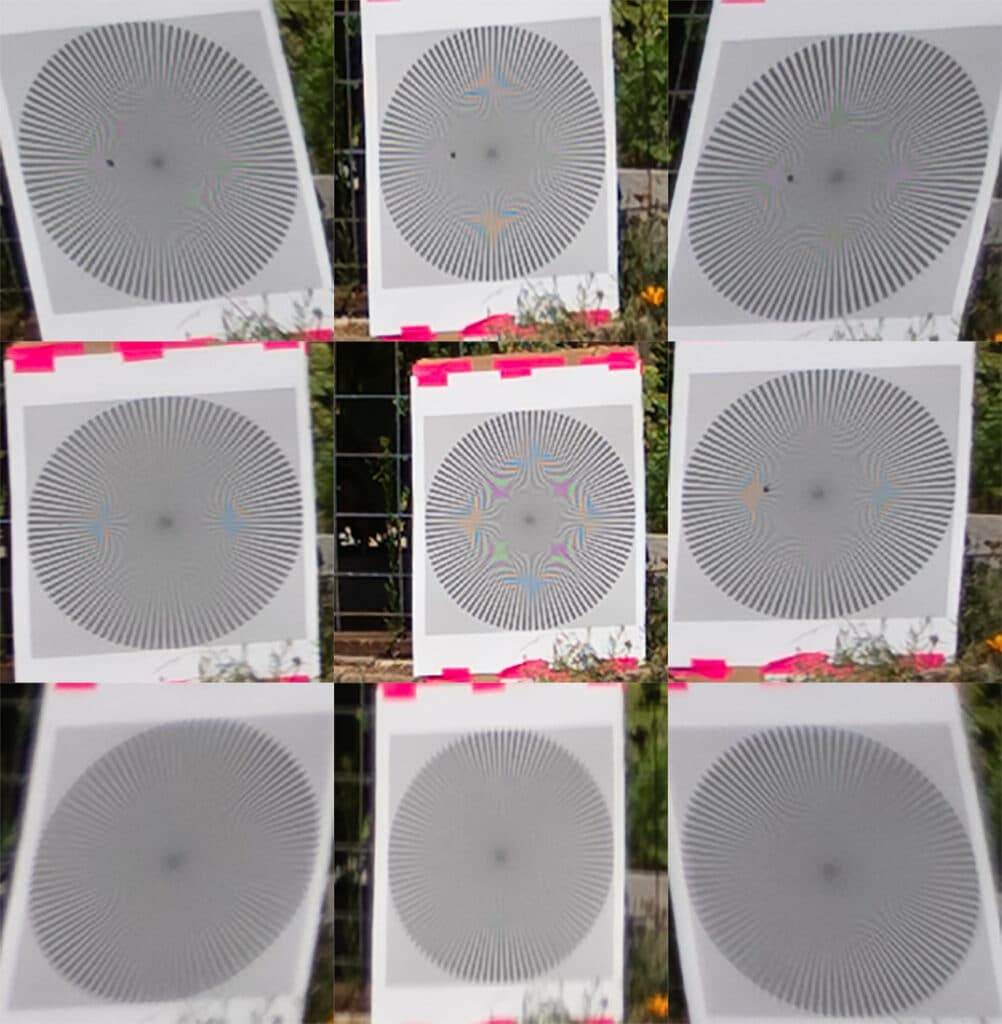 The order of shooting was:

Why is that important? Because I noticed that, when I returned the camera to the place that put the target in the center at the end of the test, I noticed that it was no longer in focus. That’s why I did two extra sets of images. You will notice that the bottom row is soft. That could point to a lens problem, or it could be an indication of the camera not holding focus properly. I’ve seen that before with GFX lenses occasionally, but never to such an extent as we see here, if indeed that is what’s going on.

I did another set, making three exposures at each of the 9 target locations using AF-S, and picking the best of each: 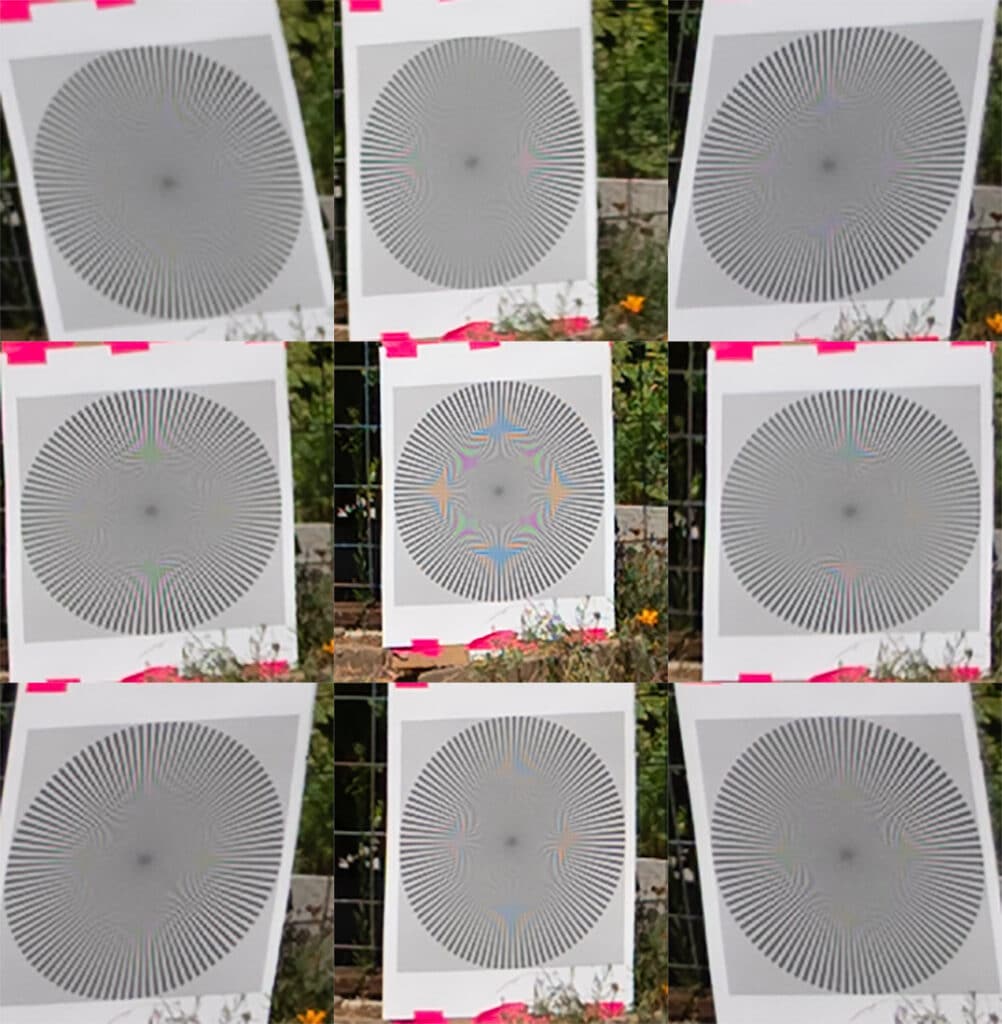 Now we see that the bottom row is at least as good as the top one. So the issue in the first set of 9 captures was either tilt or focus instability.

The obvious question at this point is: is the lens tilted, or is it the body? This body has passed tilt tests in the past, but something might have changed. So I ran another test with a different body, this time a GFX 50R.

Using the same exposure order I used before, which was middle row, top row, bottom row:

Now the bottom row looks a little better than with the other shooting order. Here’s an important fact. I sharted checked for focus instability at the end of each series by recentering the target and using magnification and focus peaking. It was sometimes off at the end. So there is focus instability. I threw those away. I’ll have to go back and test the GFX 50S doing the same thing, but in any event, I now know I have a good lens.

I haven’t seen any evidence of focus instability with this lens if the camera is not moved between exposures. So I think that focus instability is more of a problem for camera and lens testers that for real-world photographers. Still, it is good to know that it happens sometimes, and it appears to happen more with this lens than with the others I’ve tested.

Here’s a another test with the GFX 50S, with row order middle, bottom, top, and checking at the end to make sure focus hasn’t shifted.