In the previous post, I looked at how the electronic first-curtain shutter (EFCS) in the Nikon Z7 caused exposure differences from the top to the bottom of the frame. A reader pointed out that the optimum electronic first curtain timing depends on the lens exit pupil. I don’t have a lot of lenses that I can use with the oscilloscope that I used for yesterday’s post, and the results obtained from that test weren’t very quantitative. So I came up with a different test.

I aimed the camera at a backlit window shade and defocused it. 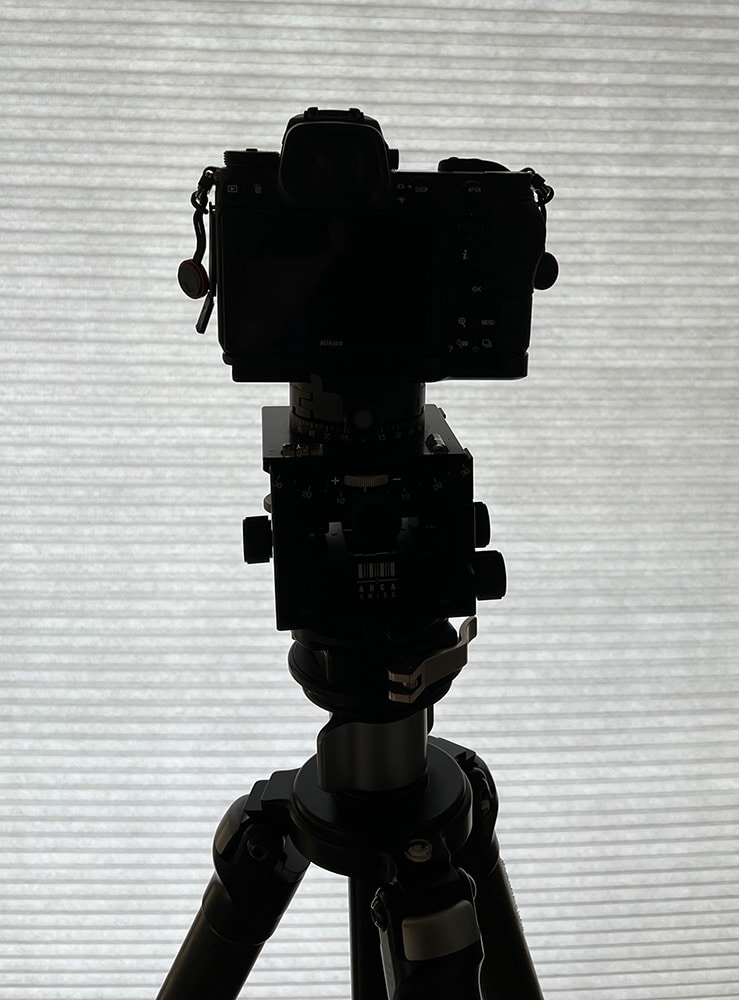 I brought the raw images into RawDigger, and selected some medium-sized areas at the very top and bottom of the images, in the center of the image as measured from left to right. I ran all the tests with EFCS on and a shutter speed of 1/2000 second, which is the highest shutter speed that Nikon allows for EFCS on the Z, and the worst case for exposure unevenness.

I made an exposure with the CV 125/2.5 wide open and focused at infinity. Then I focused the lens at 1:2, compensated approximately for the bellows factor with the ISO setting, and made a second exposure. As a test of the methodology, I made a shot with the lens set to 1:2 and the same ISO as the first shot.

The results for the two images with the focus set to 1:2 are identical. That’s what I expected, but it’s always good to check. The results for each of the raw channels are identical. Also as expected. The ratio in stops between the top of the image and the bottom with the lens focused at infinity is 3.6. with the top brighter than the bottom. When the lens is focused at the closer distance, which moves the exit pupil away from the lens, the ratio in stops is 4.9. The CV 125 is a dumb (but excellent) lens, and therefor the camera has no way of knowing where the exit pupil is.

Next I tried a lens that, if the firmwares cares about it, should have a known exit pupil location, since it’s a native lens. I picked the (also excellent) Nikon 24-70/2.8 S. I tested it wide open at 24mm, 35mm, and 70mm. I focused the lens at infinity.

At this point, I have no way of telling whether the difference between the two lenses is because the exit pupil is closer to the sensor with the Nikon lens, or because the camera knows the exit pupil location and changes the electronic first curtain timing.

My last test in this series was with the Nikon 50mm f/1.8 S lens, focused at infinity. In this test, I varied the f-stop, which in theory should affect the shading.

There is small f-stop sensitivity, and the ratio between the top and bottom is lower than with the zoom, with the bottom brighter.

As the exit pupil moves away from the sensor, the ratio decreases, to the point where, at 200mm, the ilumination is very close to even.

I don’t think the camera compensating for the lens (if it is, it’s doing a poor job of it); I think we’re just looking at differences based on the lens designs.