I’ve done a lot of work on the way that electronic first curtain shutter (EFCS) works on the Sony a7x cameras, but I never did much with the EFCS in the Nikon Z-series cameras, except to measure how well the did at reducing vibration and the associated image sharpness. The reason was that I somehow had gotten the idea that all EFCS systems in MILCs were about the same. A discussion with a DPR member make me question that assumption, and I took a look.

The tools I used were the same tools that I had used with the Sony cameras: a Tek analog oscilloscope (this won’t work with a digital one) and a Wavetek function generator. I set the Wavetek to a high frequency triangle wave so I’d have lots of traces that spanned the vertical extent of the scope. I set the x-axis timebase to 1 millisecond per division. I mounted a CV 125mm f/2.5 Apo-Lanthar on a Z7, and focused it on the scope face. 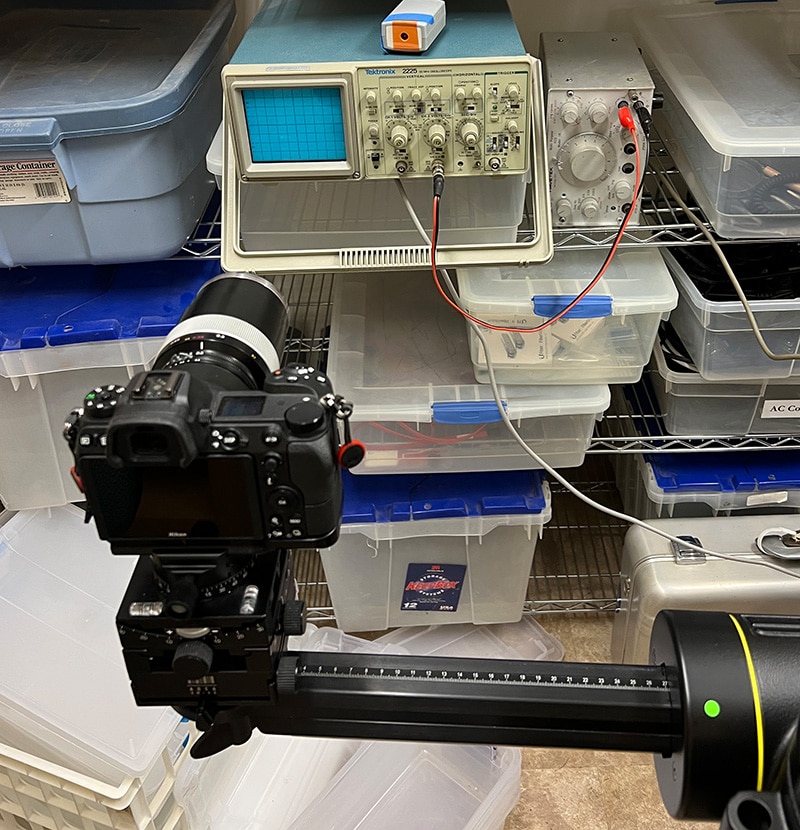 I first tested the mechanical shutter, with the shutter speed set to 1/2000 second.

Earlier time is on the left. Later time is on the right. You can see that the Nikon exposes the image from the bottom to the top (because the image is reversed on the sensor, that means the shutter travels from the top of the camera to the bottom). You can also see that the shutter speeds up as it travels across the sensor. Both curtains speed up at the same rate, so the exposure is even.

At 1/1000 second, not much changes except that the slit gets wider, so that each parto fthe sensor is exposed for 1 millisecond, or 1/1000 second.

The second curtain, which is the mechanical shutter curtain, still takes 4 msec to make its way across the sensor, and it still starts slow and speeds up as it goes. But the first curtain, which is the electronic one, marches along at a constant pace, so that the exposure is shorter at the bottom of the image than at the top by almost 500 microseconds.

Sony has this problem to a smaller extent, because they come close to replicating the speeding up of the second curtain by speeding up the first, electronic, one.

Slowing the shutter down even more:

At 1/250, the problem essentially disappears.

Nikon limits the maximum shutter speed in EFCS mode to 1/2000 second. Sony doesn’t limit theirs, but cautions against high shutter speeds with EFCS. Sony’s compensation in the EFCS ‘ballistics” is one of the reasons why. The other is that the Sony shutter travels in the opposite direction and it’s often better to have the image a bit dark at the top than at the bottom.