This is one of four posts on the Nikon Z6 and Z7 fake ISO settings. The series starts here.

Bill Claff has taken me to task for using the term “fake ISO” to describe the ISO settings on the Nikon Z6 and Z7 below base ISO. Bill and I have agreed to disagree on this point with respect to several other cameras in the past, so it’s not surprising to see this come up again. Bill says that the term fake ISO connotes some kind of cheating, and that the way those ISO settings work is well understood by photographers. I’ll discuss both of those arguments here.

Before I get started let me say that this is not a disagreement over how the Z6 and Z7 operate. Bill and I are in alignment on that subject. It’s a discussion about terminology.

Here’s the definition of the word “fake”. 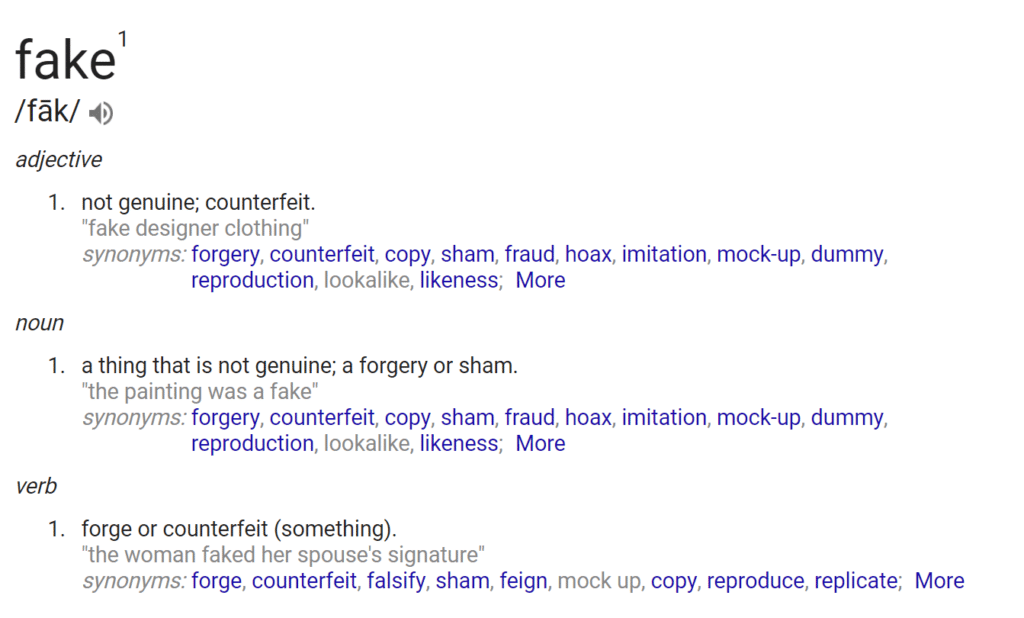 The way I read it, “cheating” may not be the best word to describe what’s going on, but “deception” fits. I do think that the way Nikon describes the ISO settings below base ISO is deceptive.

Let’s look at two examples. The first is from the Z7 manual: 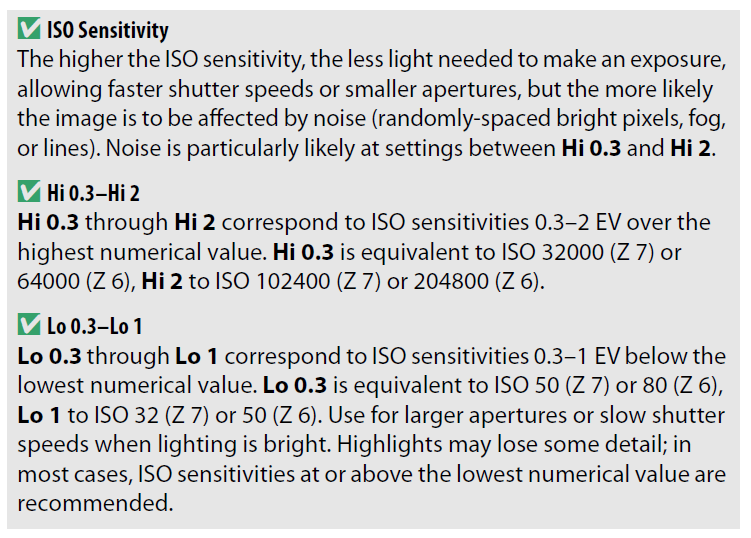 And the second is from a Nikon article:

ISO sensitivity in photography is a measure of how sensitive a digital sensor or film is to light. The higher the ISO sensitivity the less light needed to make an exposure allowing faster shutter speeds or smaller apertures.

When expanding a digital camera’s ISO sensitivity beyond its base range the camera may perform slightly differently compared to the normal ISO standard for that ISO speed.

The settings Lo 0.3 through Lo 1 correspond to ISO sensitivities 0.3-1 EV below the base ISO range i.e. on a D800 with an ISO setting of Lo 1, this would be the equivalent of using ISO 50, which would be helpful if shooting with larger apertures in bright conditions. Contrast is slightly higher than normal with this option in most cases, if this is an issue we would recommend using one of the base ISO settings on the camera.

The first problem is that the explanations make zero distinction between the effect of the Lo ISOs on raw files and on JPEG files or the JPEG preview images. But we’ve seen that there are clear differences: for the same exposure, reducing the ISO below base ISO has no effect at all on raw data, but darkens the JPEG images.

The second thing that’s wrong (and, OK, I’ll say it: deceptive and misleading) is that the sensitivity of the sensor to light is reduced when selecting one of the low ISOs below that at base ISO. As we’ve seen from looking at the raw files, the sensor’s sensitivity to light is not changed one whit at the Lo ISOs from what it is at base ISO.

Here is another deception. When you turn the ISO down below base, the histogram no longer shows you something related to the sensor values and the sensor saturation (you could argue that the normal histogram is not closely coupled to those things, but this compounds the error). In the Sony a7x and a9 cameras, the zebra settings change to match the postprocessed darkening. The Z6 and Z7 inexplicitly don’t offer zebras for still photography, but if and when they get around to that, I’m betting they work like the Sony zebras.

I could go on, but you get the idea.

I’ll turn now to Bill’s other argument, that the way the sub-base ISO settings work is well-understood by photographers. This is a defense against the term “fake” in the same way that you can’t say Monopoly money is counterfeit because everybody knows it’s not real money.

How I wish Bill’s conjecture were true. I have two reasons for thinking that it’s not.

The first is the pushback that I get when I post about fake ISOs. I’m not talking about the pushback from folks like Bill, who understand perfectly what’s going on. I’m talking about the reaction of people who flat out don’t believe me, and think that with constant exposure the raw file values change when you select an ISO setting below base ISO. The fact that the raw converters usually follow the metadata instructions means that you need a program that lets you look at the raw data in order to see what’s happening. Not many people have those programs and know how to use them.

This fundamental misunderstanding is not just something that happens to photographic neophytes. It occurs with some regularity among people whose other photographic knowledge and whose photographic skills are at very high levels. Some of them make their living as commercial photographers. Some if them have extensive experience that goes back to the film days. The ones that are the most competent photographers in general are often the hardest to convince.

We’ve seen above that Nikon doesn’t tell you what’s happening, and the raw developers use the metadata to collude with the camera in the deception that changing the ISO settings below base is affecting the data. I don’t mean to say that Nikon and Adobe (I’m just using Adobe because I’m familiar with their software) are malicious in their intent. I think they are just trying to hide some things that they consider confusing from their customers. But you don’t need malice to have deception.

My second reason is the number of pictures that I’ve seen posted using ISOs below base which show the ill effects of that choice. I used to comment on these every time I saw them. I no longer do that, because most people don’t believe me when I tell them what’s really going on, and the discussion is time consuming when done retail. It is my hope that discussing the issue here will reduce the number of images that I see that have problems.

I think the term “fake ISOs” is justified. It’s punchier than “deceptive ISOs” or “misleading ISOs”. As I said in an earlier post, “JPEG ISOs” is a possibility, but that doesn’t really capture what’s going on. How about “JPEG-only ISOs”?