I just opened my Z7 today. The battery is still charging. I tried to use some of my old D850 batteries, but they were all flat, since I use the D850 with the grip and D5 batteries, so the D850 ones never got charged. I did handle the camera, and got a surprise: the grip seemed smaller than the a7RIII/a7III/a9 grip. I’d heard that it was bigger, but there was no place for my little finger.

Then the lightbulb went off. I use my Sony MILCs with either RRS or SmallRig plates, and they all extend the grip slightly. I’ve ordered RRS plates for the Z7, but they appear not to be shipping yet. I think they’re going to be really useful for handheld shooting with the Z7.

But, with a nod to Arlo Gutherie, this is a post about engineering dynamic range (EDR). For a deep dive into EDR, look here:

I use an approximation: clipping over read noise.

But before I test a new camera for EDR, I test it for self-heating. I made 100 exposures 2 seconds apart at 1/1000 second, with the ISO set to 1000, and measured the read noise in counts (or data numbers, or least-significant bits, if you prefer). 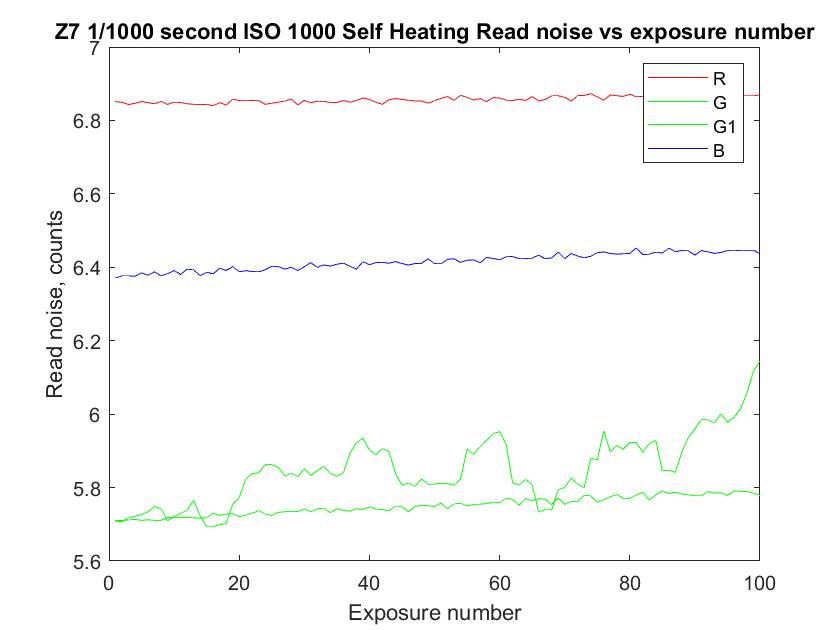 There is a tiny increase in read noise as the sequence elapses. It interesting that one of the green channels jumps around a bit, and increases more than the other three channels. I don’t know what to make of that.

I did an ISO series using both the mechanical and electronic first curtain (EFCS) shutters. The file format was 14-bit losslessly compressed raw, and the shutter mode was single shot. 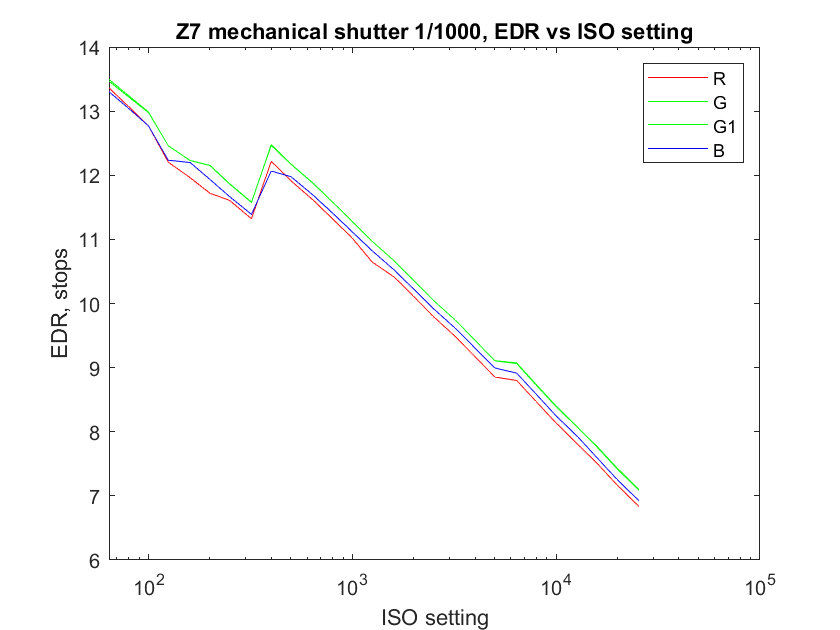 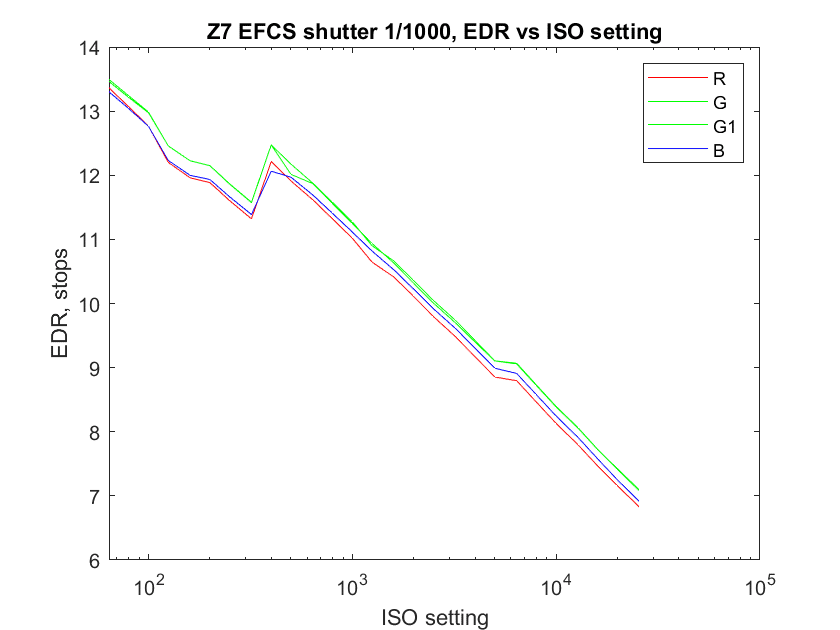 The blue and red channels don’t have quite the dynamic range that the green channels do, and that’s because of Nikon’s white balance prescaling. This is a camera calibration technique that multiplies the red and blue channel counts by numbers that are burned into the camera at the factory. I think this is a brain-dead way to do this calibration; it would be more flexible to write the numbers into the metadata and do the multiplications in postproduction. But nobody asked me.

There are some wiggles in the curves between ISO 100 and 640 that didn’t show up in the D850, which supposedly has a sensor that is very similar. Bill Claff thinks this is because of a firmware oopsie, and I tend to agree with him. We’ll look at some histograms in another post, which should be instructive.

How close are the two curves above? If we plot their averages over the 4 raw channels against each other, we can see that they are very close. 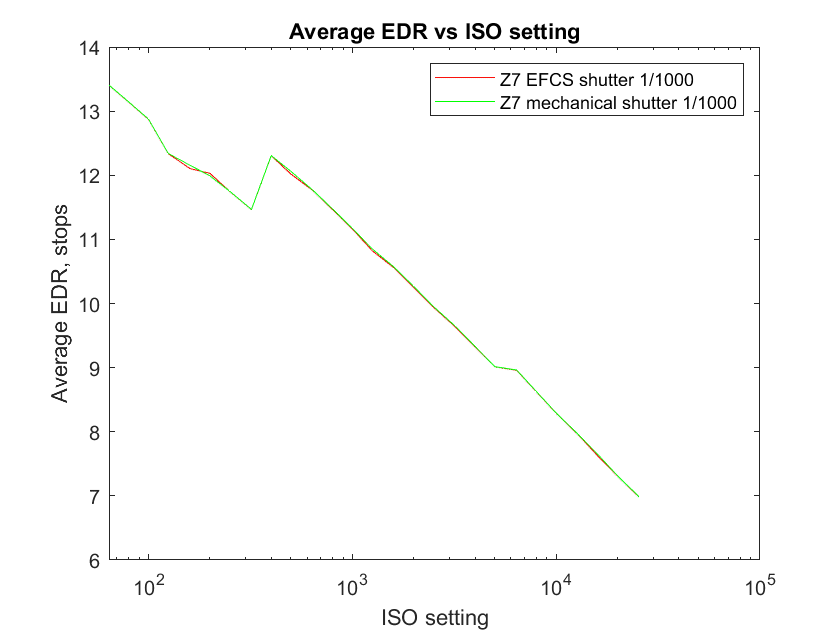 Now let’s look at the same curve for the fully-electronic shutter: 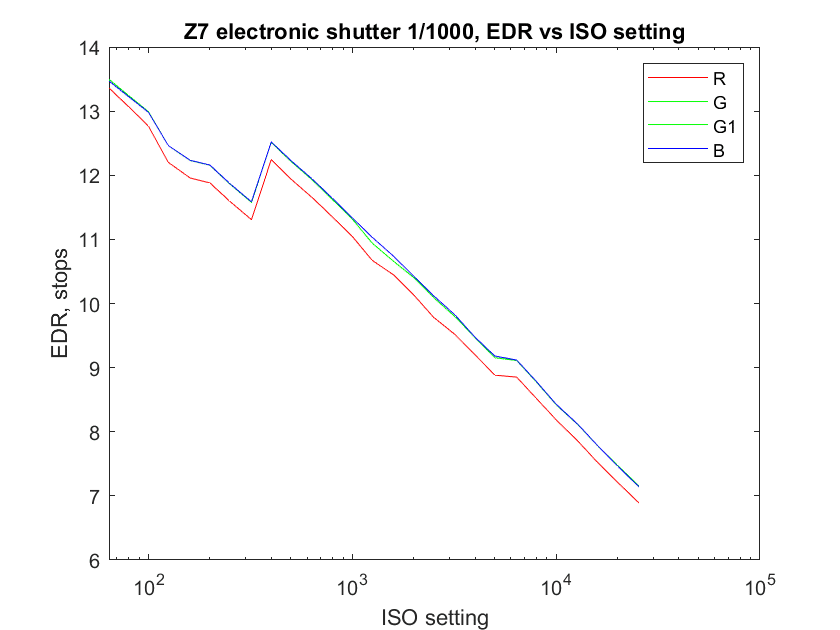 They look pretty similar, too, but we can see some differences when we plot all three sets of averages: 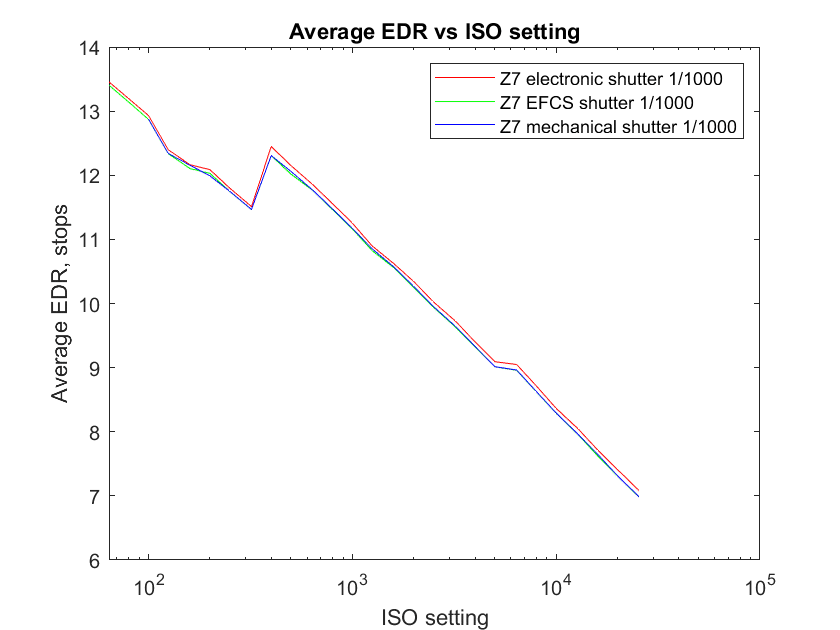 The all-electronic shutter has the highest EDR, if only by a fraction. We saw this with the a7RIII, and I think it’s because there is less time between the exposure and the reading of the data with the electronic shutter, and therefore less time for the dark current to degrade the read noise.

In spite of the wiggles, I see no problems here.