One of the things that I do with a new camera to suss out how much spatial filtering exists is run a dark-field series at ISO 1000 at all timed shutter speeds. I did that today with the Z7, using single shot shutter mode, and 14-bit losslessly compressed raws. I’ll present the result as engineering dynamic range (EDR) for each of the four raw channels. 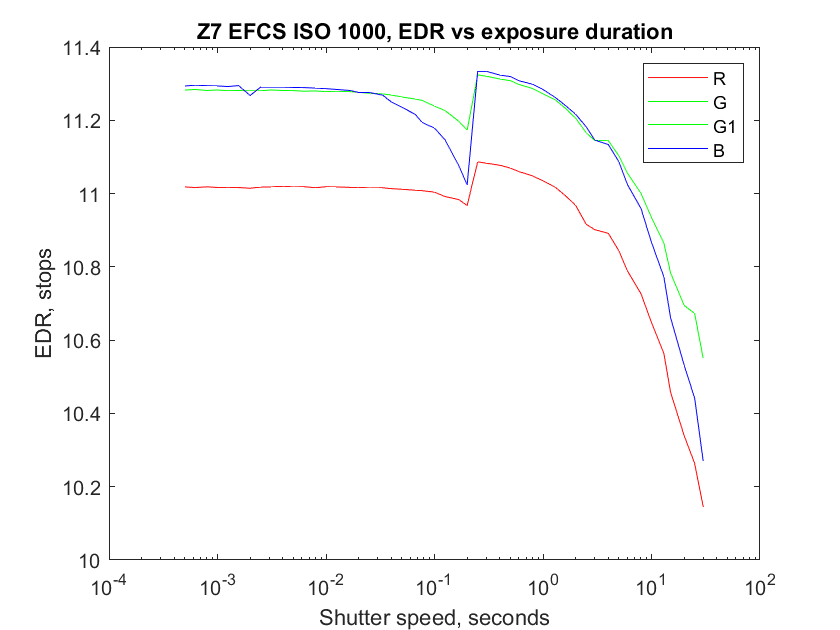 It is obvious that some sort of special processing starts at about 1/6 second.

Then I made another run with long exposure noise reduction (LENR) turned on: 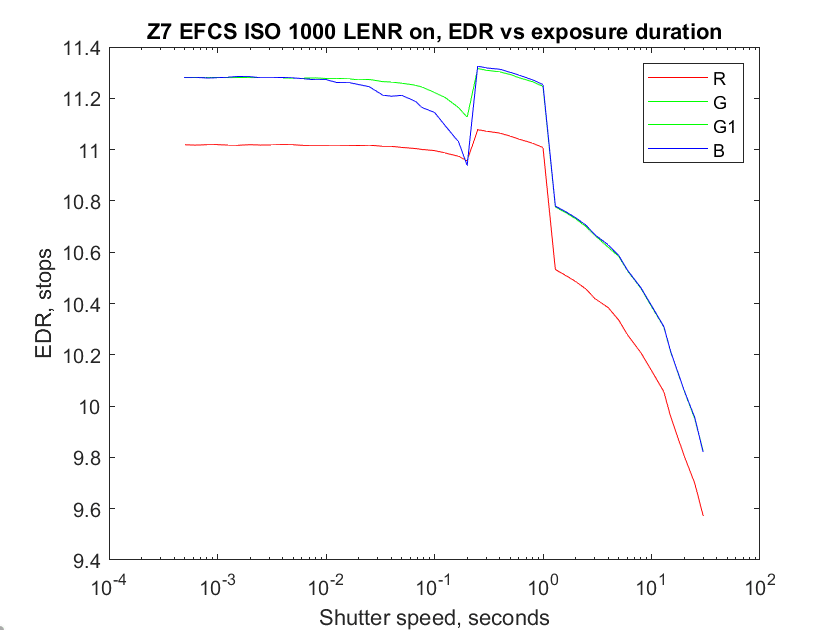 There is an improvement between 1/6 second and 1 second, but then the EDR falls of a cliff.

Compare that to the D850, first with LENR off: 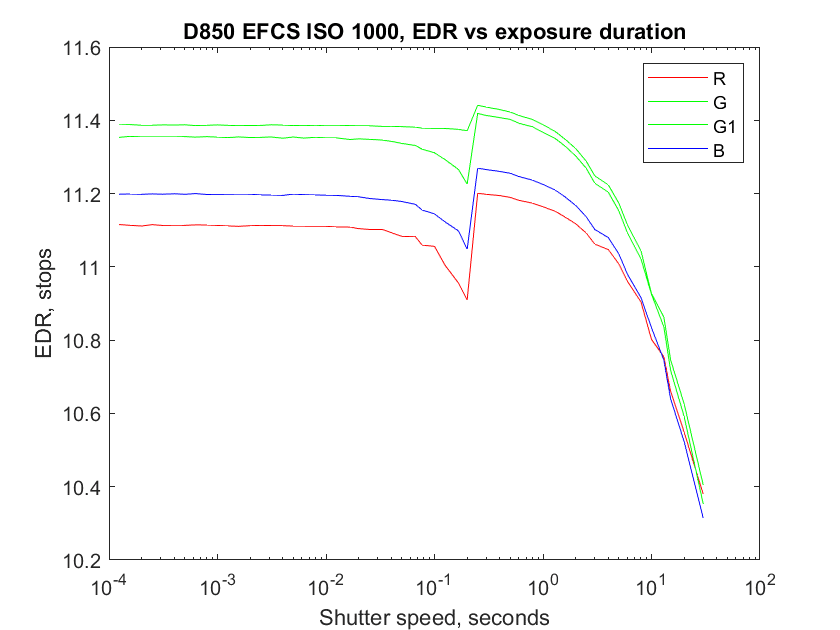 And with it on: 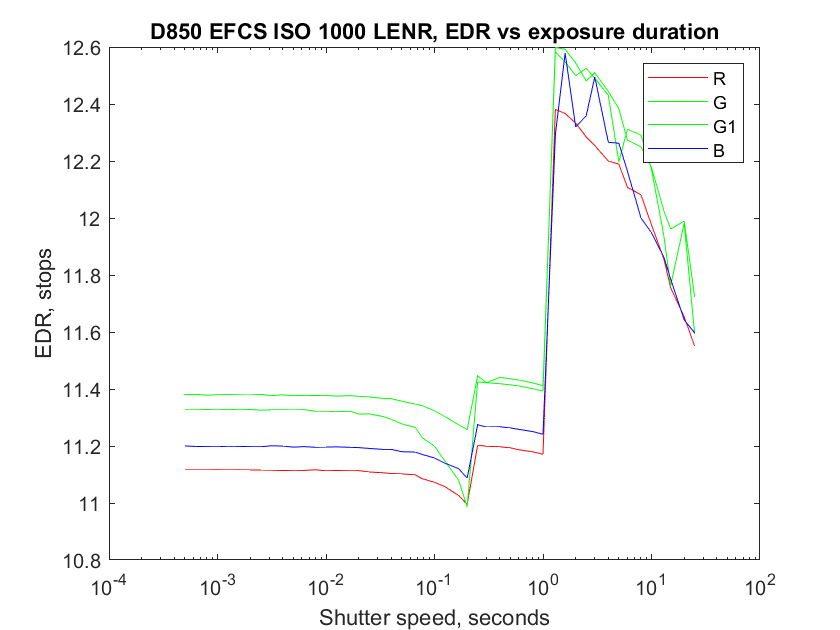 Here are both sets of Z7 curves plotted together: 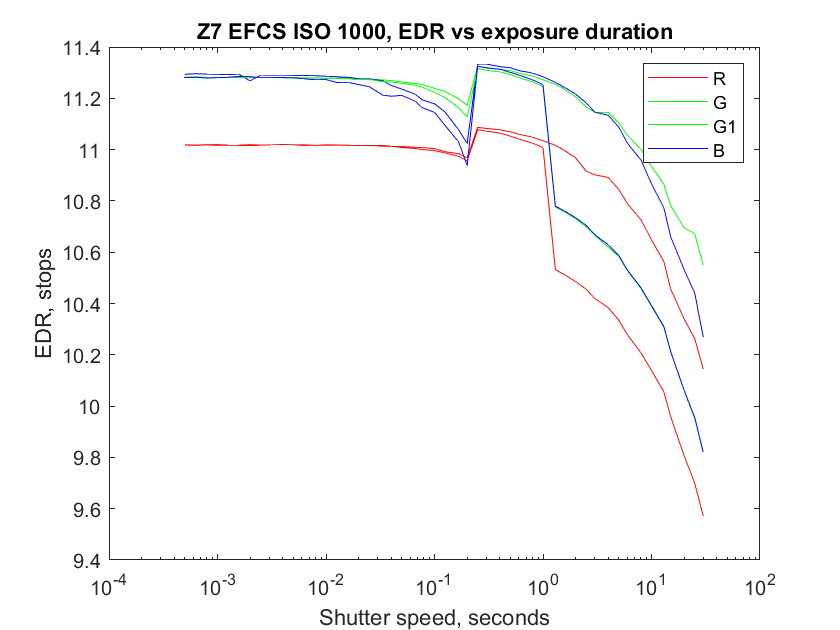 You can see that the EDR with LENR on is actually worse than with it off above 1 second.

For comparison, here are both curves for the D850: 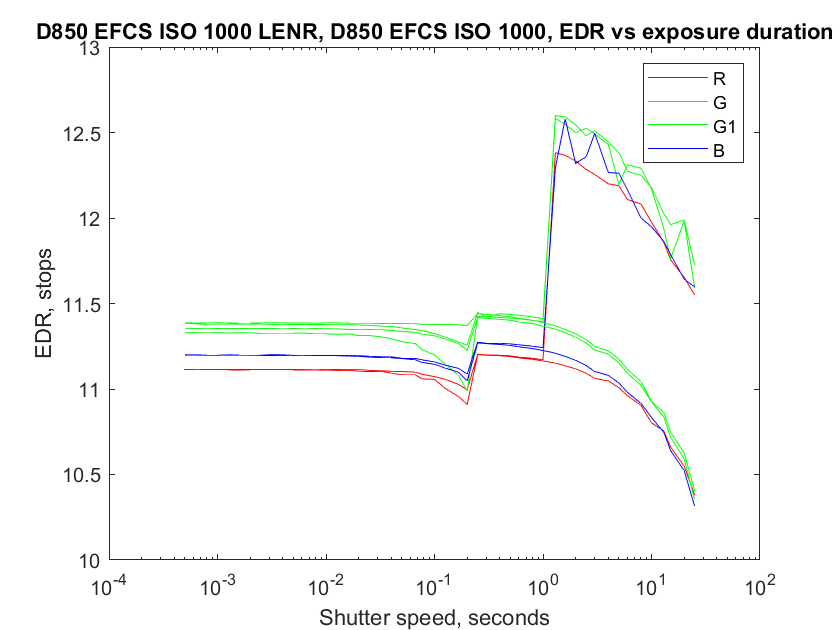 Is it possible that the Z7 is just skipping the dark frame subtraction step at long shutter speed? Here’s a histogram of a 30-second exposure with LENR off: 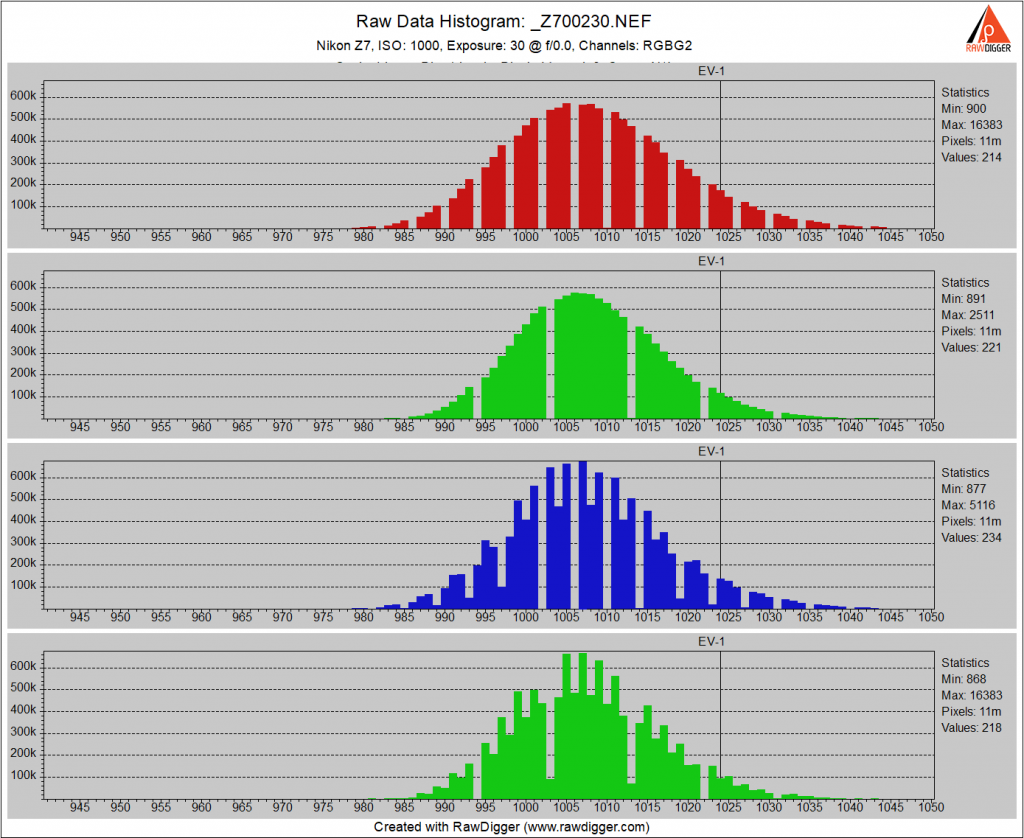 The gaps in the green histogram must be from some hidden processing that the Z7 does for long exposures since we didn’t see those at ISO 1000 with 1/1000 second shutter speed.

Now with LENR on: 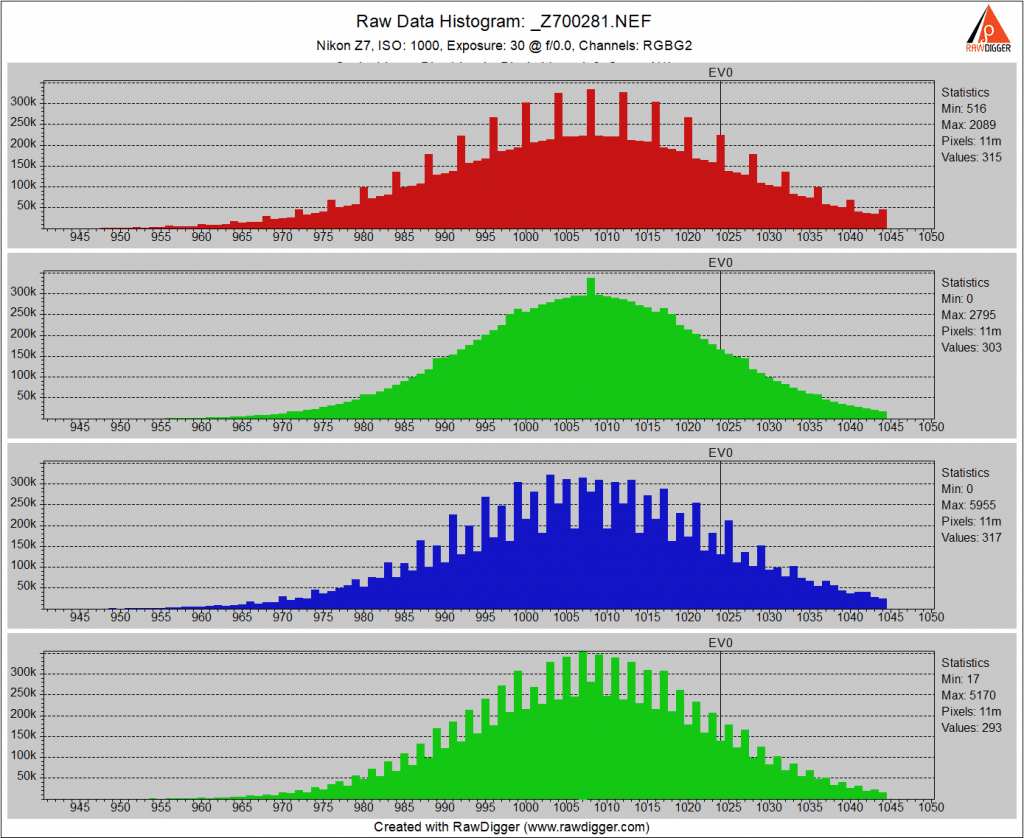 It’s clear that there is some processing that fills in those gaps. It’s also clear that it is not helping the average noise. It is removing outliers. You can see that by looking at the Max values to the right of the histograms.

I went back and made a shot with LENR on with the camera cold. Here’s the histogram: 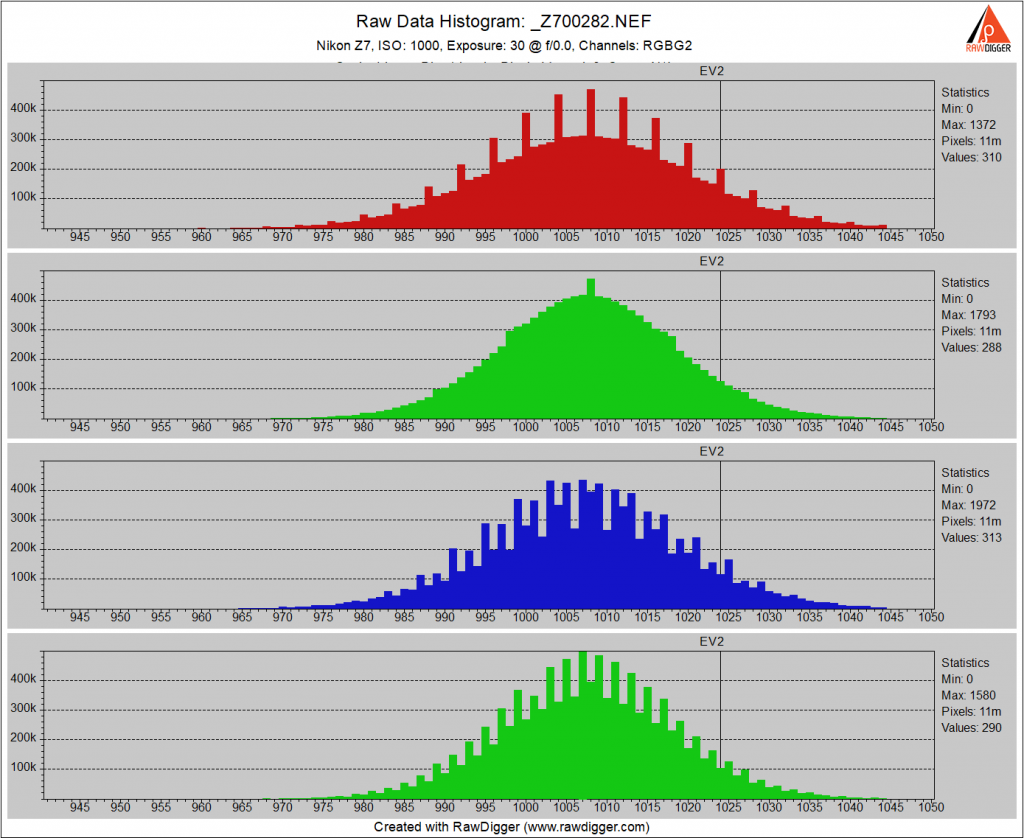 It’s not as bad as the last shot in the LENR series, and about the same as last shot in the no-LENR series. The way that dark-frame subtraction works, it will make the random noise 1.414 times worse than without it, but it will remove noise that is constant from frame to frame. IT looks like the Z7 is doing that. But whatever processing takes place in the D850 with LENR on above 1 second appears to do more than remove outliers, and provides about a 1-stop improvement in EDR. We don’t see that with the Z7. Is this a good thing or a bad thing? I don’t really know.