Bill Claff has recently posted photon transfer curves and input-referred read noise curves for the Phase One IQ4 150MP camera on his excellent web site. This camera uses the Sony IMX 411 sensor that Sony began shipping last year. Presumably, the announced-but-not-yet-shipping Fujifilm  GFX 100S will use the IMX 461 sensor that Sony also began to sell last year. The pitch of the two sensors are identical, and therefore is is reasonable to assume that the pixel design of both are the same. If that’s true, we can use the information that Bill has posted about the IQ4 150MP to derive what we might expect in the GFX 100S.

A few words about the Phase One IQ4 100 MP results that Bill obtained. It looks like the sensor has the full-well capacity (FWC) that we’d expect from a modern CMOS sensor. Crunching the numbers on Bill’s photon transfer curve (PTC) page gets us about 3200 electrons per square micrometer  — that’s 3200 e-/um2 in the jargon of sensorati. The Nikon D850, Sony a7RIII, and Sony a7III (all Sony-made sensors) are hanging in right about that number. In addition, the IQ4 100 MP chip employs dual conversion gain, switching to the high-gain mode at ISO 400 and above. This is quite an improvement on the old IMX 161 used in the GFX 50S, the GFX 50R, the Hasselblad X1D, the Hasselblad H6D-50c, and the Pentax 645Z, which all had FWC densities of about 1800 e-/um2. In addition, the Phase One IQ3 100 MP, which used the IMX 211 sensor of the same generation as the IMX 161, had a FWC density of about 2200 e-/um2.

I assumed that the IMX 461 will have the same FWC as the sensor in the IQ4 150 MP, and the same read noise. I plugged those characteristics into a shadow noise simulation program that I wrote — more about that program in a future post — and I’m going to show you some of the results. But first, let’s look at the current GFX 50S and the Nikon D850 using that program. 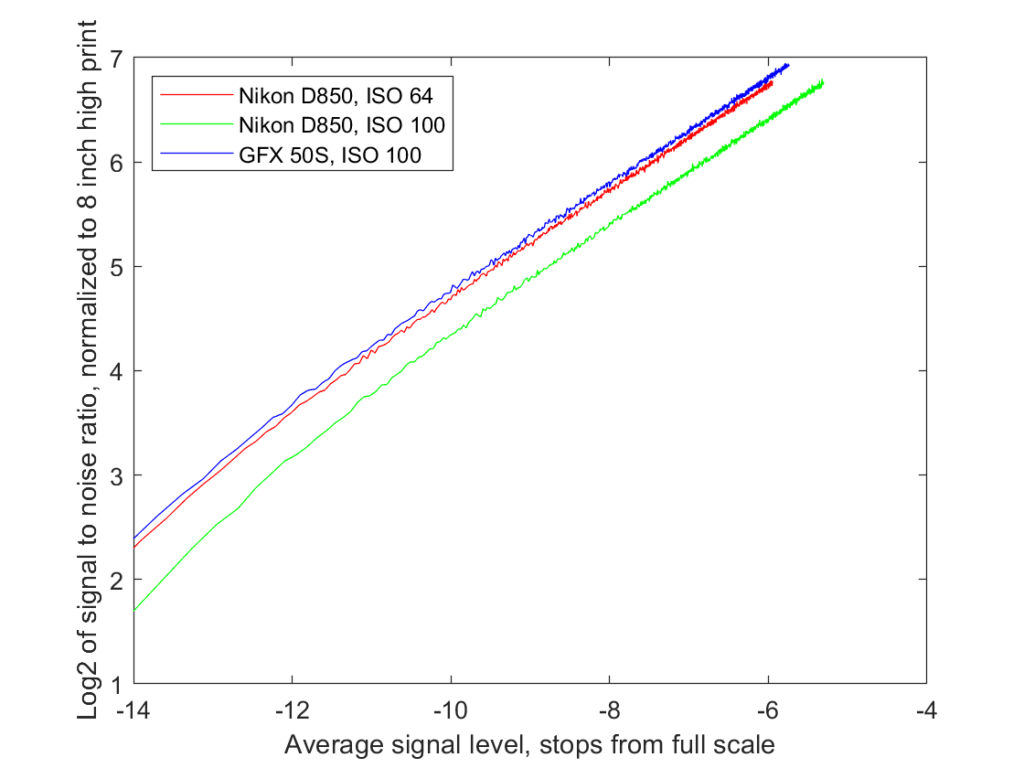 The vertical axis is the signal to noise ratio of a raw green channel normalized to an 8-inch-high print size using the same normalization that Bill uses in his Photographic Dynamic Range (PDR) calculations. The horizontal axis is signal level in stops from full scale. The camera FWC and read noise (RN) data came from Bill’s website, too. The NSR value that Bill uses to calculate PDR is about an SNR of 10, which has a log base two of about 3.3. This simulation gives the GFX 50S a very slight advantage in shadow noise, and says that both cameras have PDRs of a bit over 12 stops. Bill’s PDRs for both cameras are a bit under 12 stops, but he uses all the raw channels for that, which usually gives slightly worse results.  D850 at ISO 100 is substantially worse:

Over the years, there have been questions about the choice of SNR for PDR calculations. Those discussions have merit, but in this particular case, the particular PDR chosen is not important since the curves are more or less parallel. 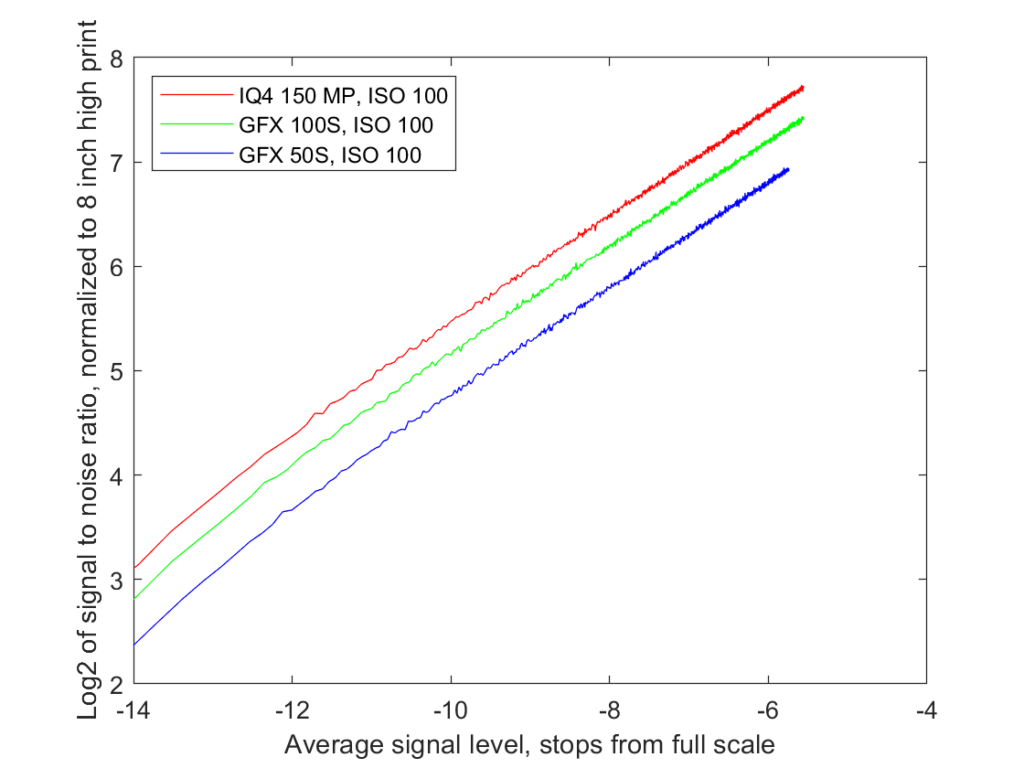 Now we’ll look at what happens when the conversion gain is increased. 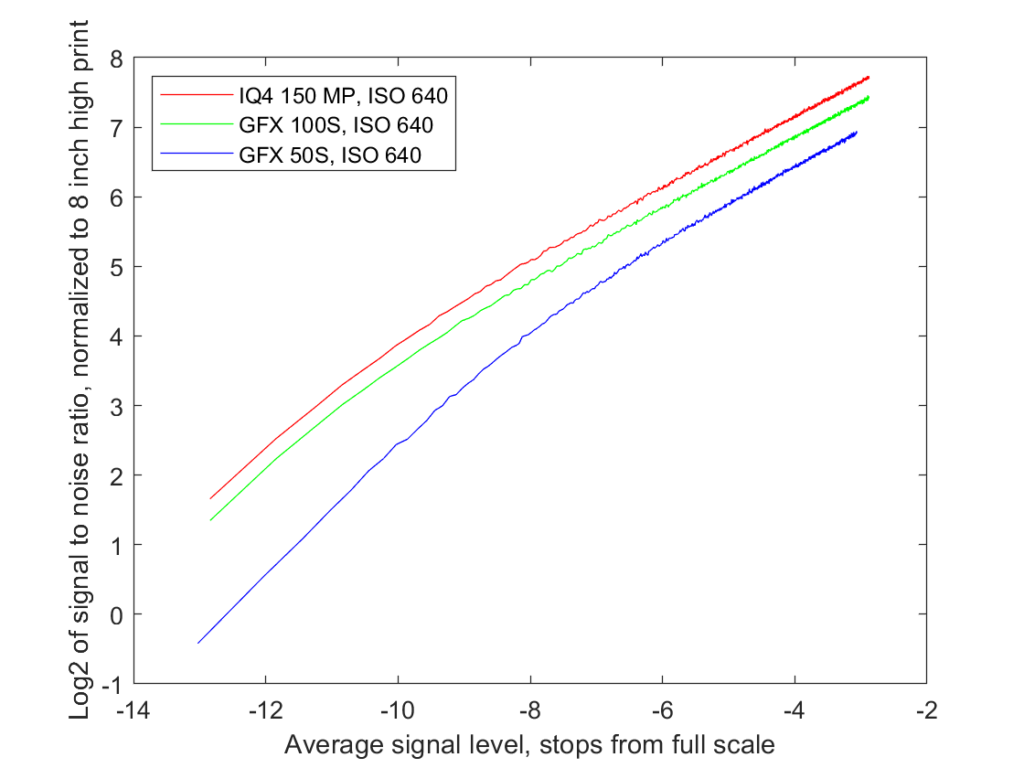 The new camera should be much better than the old in very dark shadow regions.

The input-referred read noise of the IQ4 150 MP bounces around, and there are some ISOs that should be avoided for best results. It remains to be seen whether that will be true of the GFX 100S. There is reason to think that the read noise of a smaller sensor could be lower than that of a larger one with the same pixel design. Should that be the case, the GFX 100S numbers will look even better in very dark portions of images.