There has recently been some controversy about the relative noise behavior of the Nikon Z6 and Z7 in deep shadows. I intend to address those differences in a series of posts which will include both quantitative results and visual ones. If you go to the bottom of this post you’ll see pingback links to all of the other posts about Z6 and Z7 shadow noise.

When I started down this road last week, I ran into some conflicts among some of the basic camera measurements performed by respected practitioners. Since these influence the numerical results that I’m calculating, I need to resolve these. So I went back and preformed my own measurements on the two cameras, something that I had not done before.

The first thing I did was measure the photon transfer curves for the cameras at various ISO settings. Here’s what I got at the whole ISO steps: 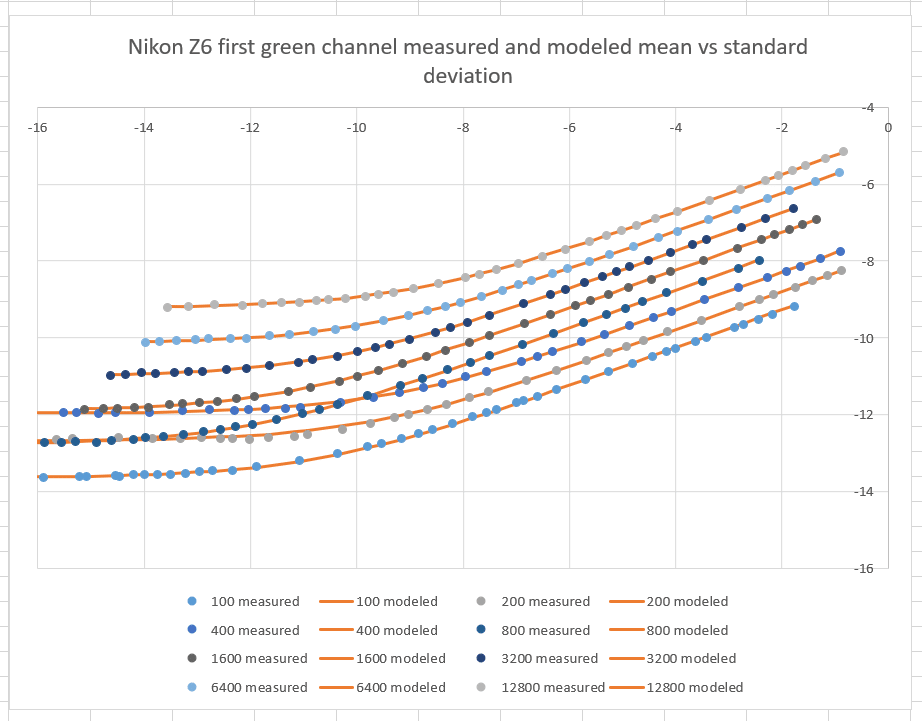 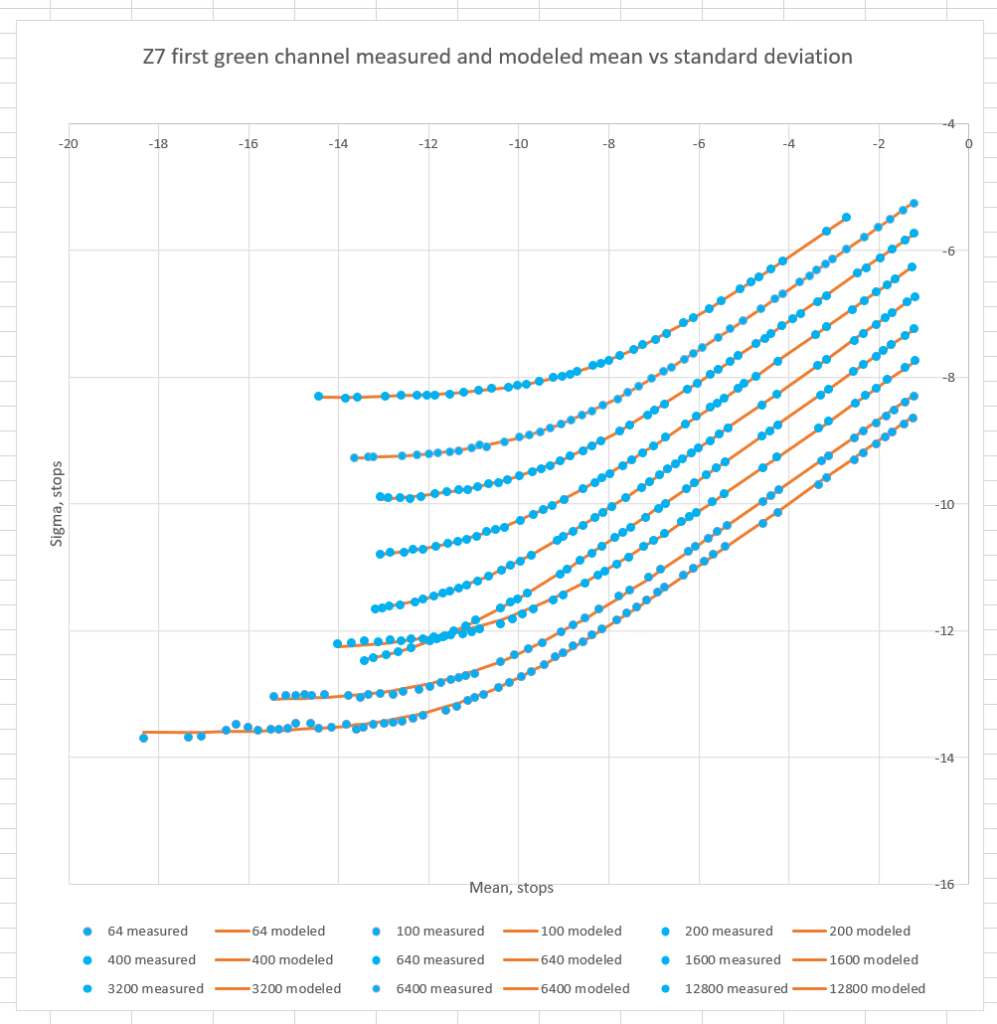 For comparison, here are the D850 curves: 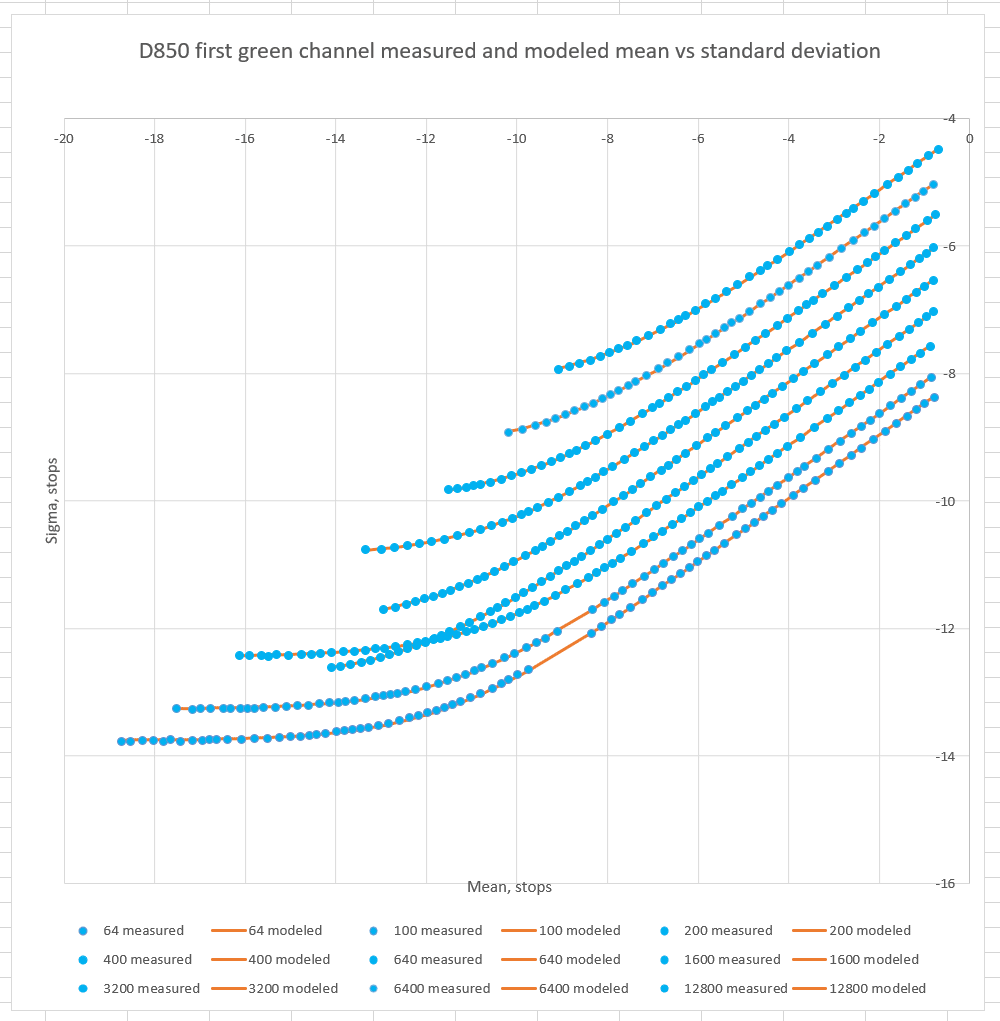 I’ll explain these curves. The horizontal axis is the average signal level, in stops below full scale. The vertical axis is the root-mean-square (rms) noise, which is the same as the standard deviation (sigma) of the captured data. The lower curves are the ones at lower ISO settings; as the ISO setting increases, so does the rms noise relative to full scale.

The program that crunched the data was one that Jack Hogan and I wrote several years ago, and that has been much modified by me since. It not only plots the measured data — the blue points — but it models the sensor and displays the results of the model as the orange lines. The agreement is good in all cases above.

The modeling part of the program computes input referred input-referred read noise (RN) and full well capacity (FWC). The input-referred part means that it calculates the noise in terms of the number of electrons captured. Here’s what it got: 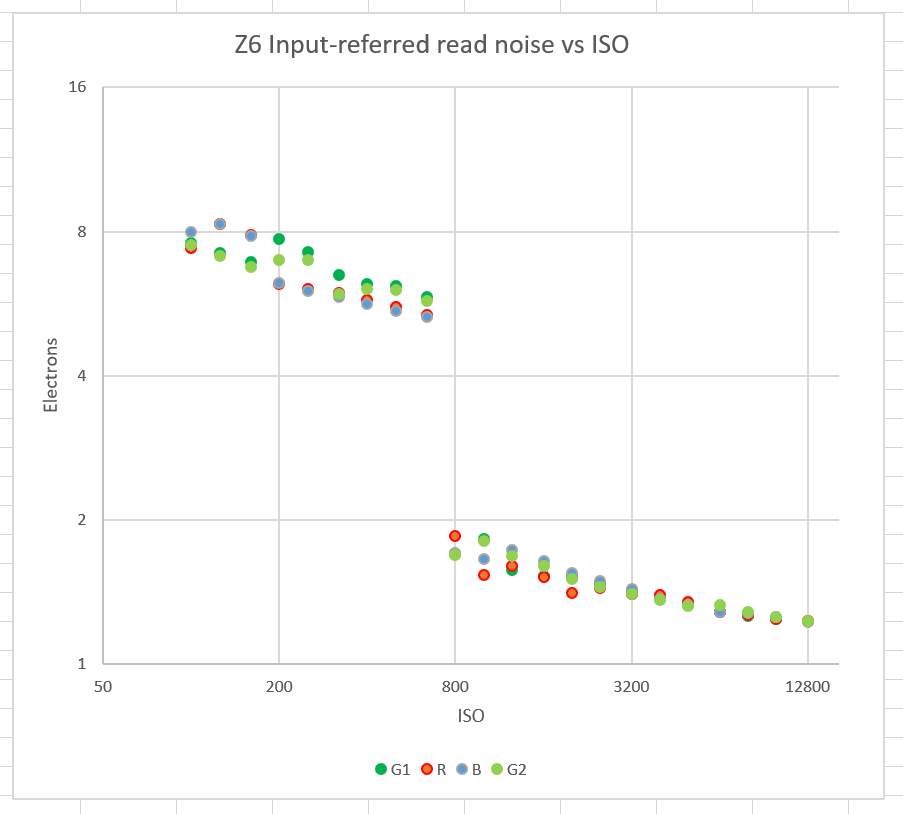 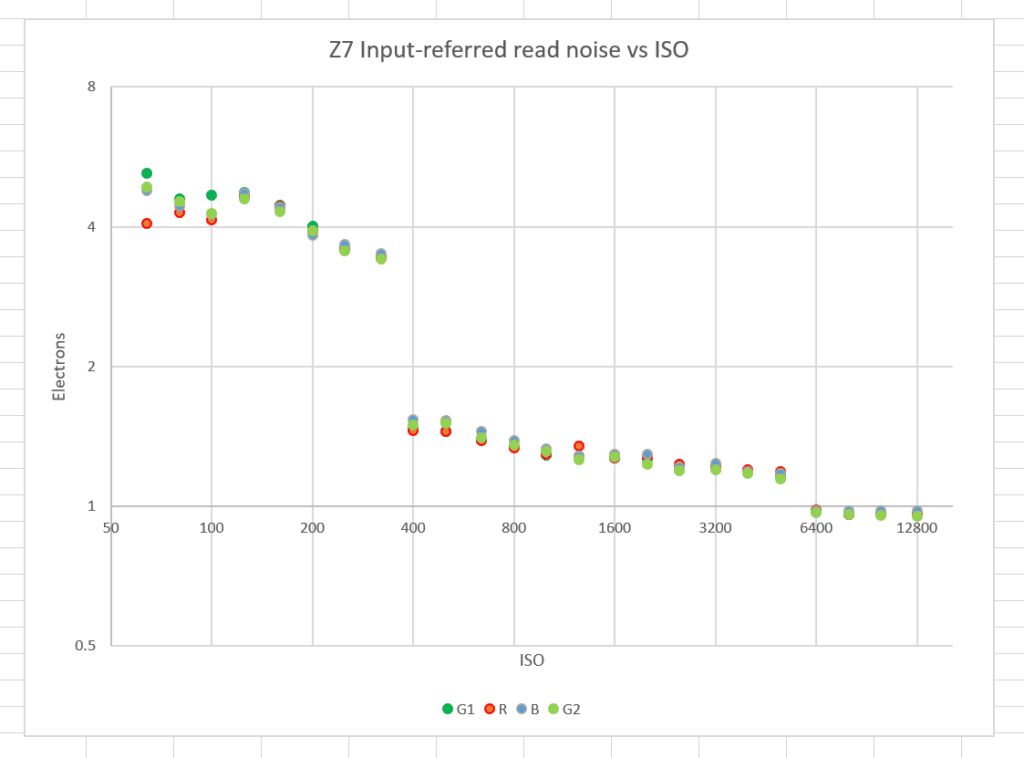 Both the Z6 and Z7 curves are distinguished by large drops in the input-referred read noise at particular ISO steps. That is the result of the conversion gain (the ratio between the voltage on the pixel and the number of electrons stored there) changing. The technology employed was invented by Aptina, and is used in many modern Sony sensors. 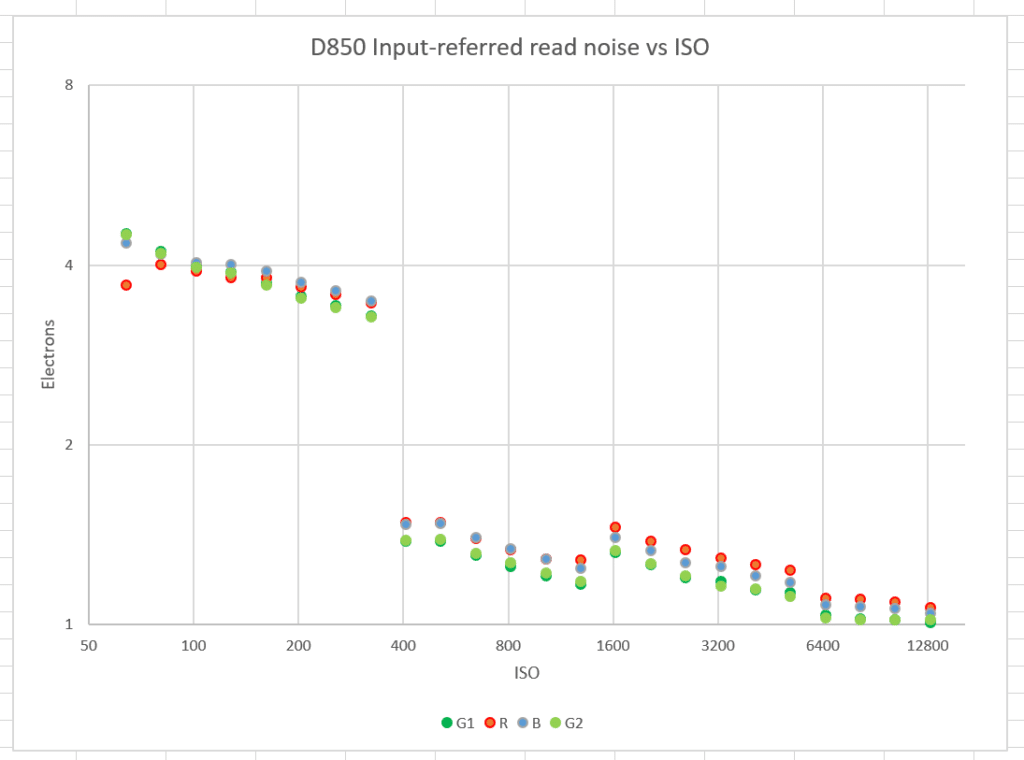 The FWC’s for each raw channel and for each ISO, follow: 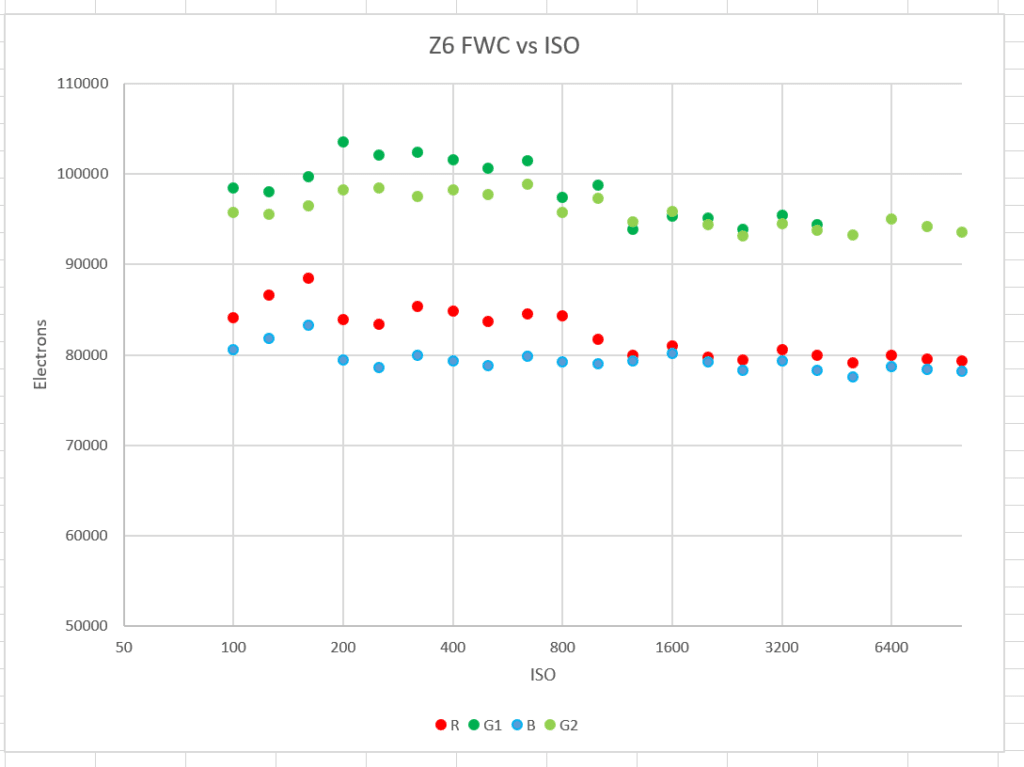 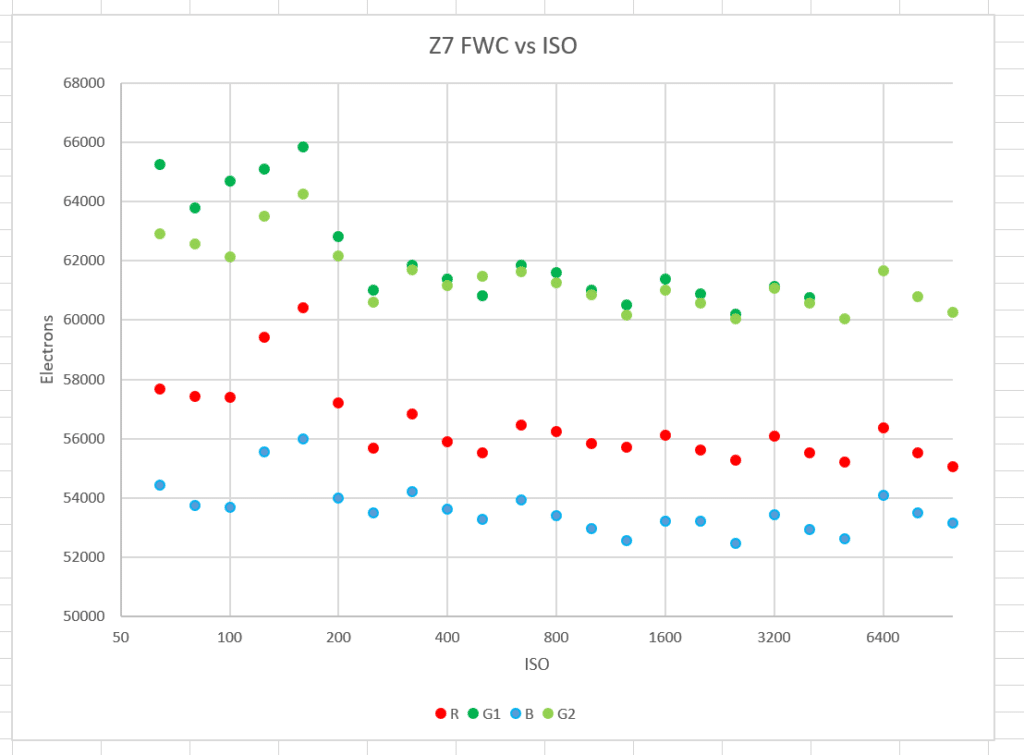 The green channels have higher FWCs because Nikon pre-scales the red and blue channels in a — misguided, IMHO — calibration scheme.

As a check on the read noise curves above, which were created by fitting a model of the camera to the photon transfer curve data, I looked at the same curves obtained by direct measurement of dark-field images at 1/1000 second. These are for the average of the two green channels. 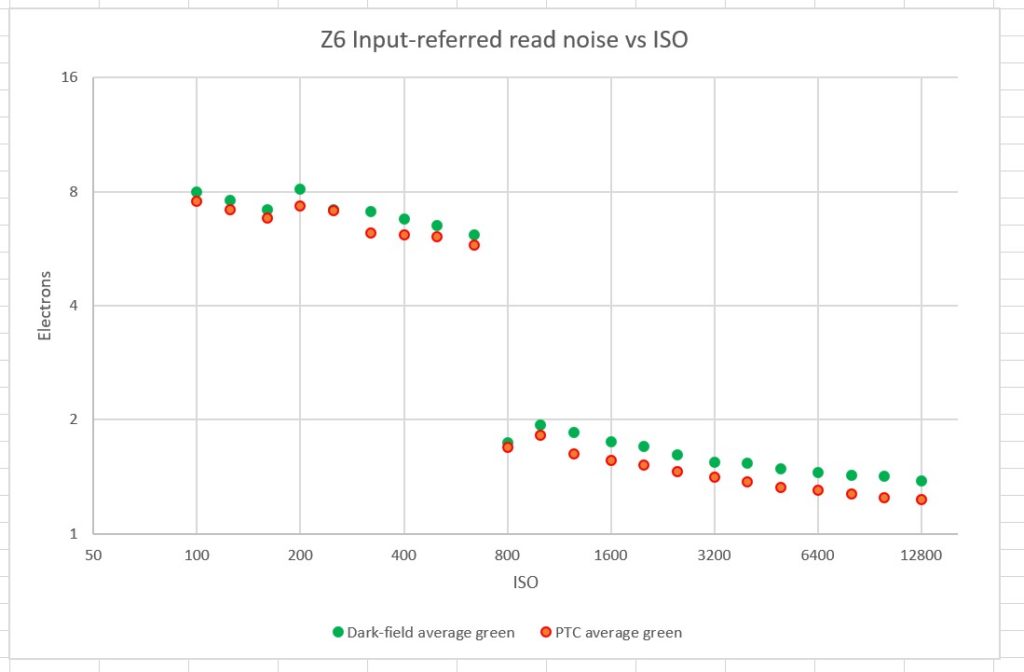 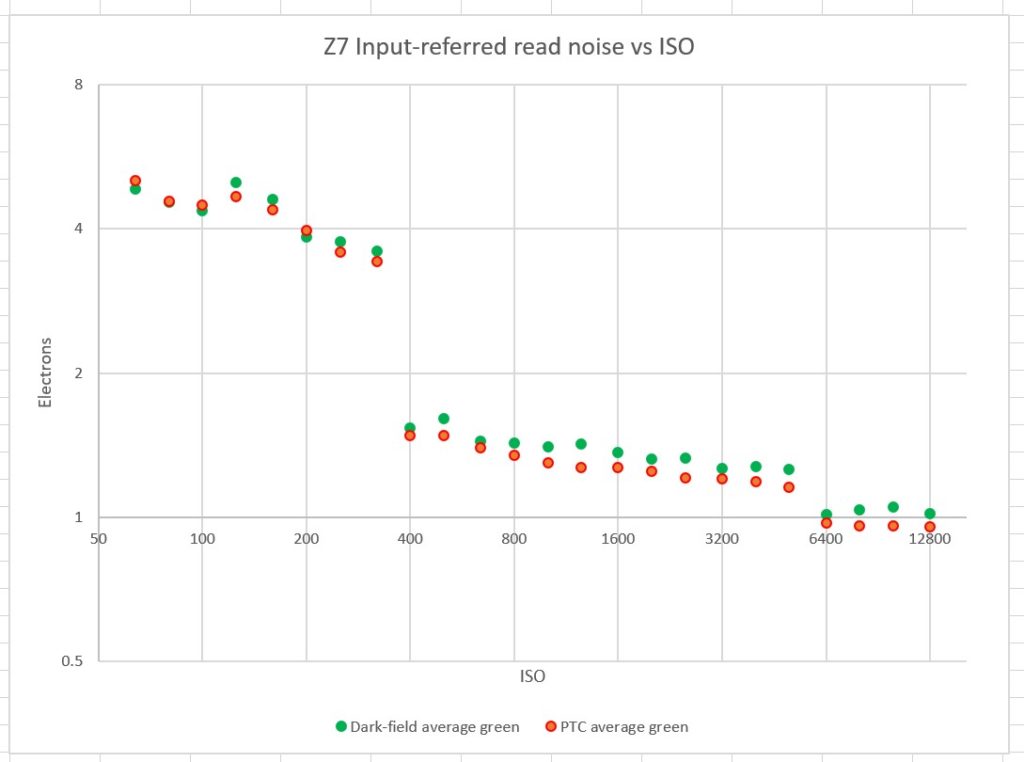 The agreement is good.

A lot of dry numbers in this post. Be patient, I’ll be using the data to make calculations that are relevant to photography in the next few.