This is mostly a redo of a test I did a few days ago in which I didn’t rack focus between the shots for the PDAF focusing modes, thus rendering the results, if not totally invalid, not useful.

I changed the target for this one: 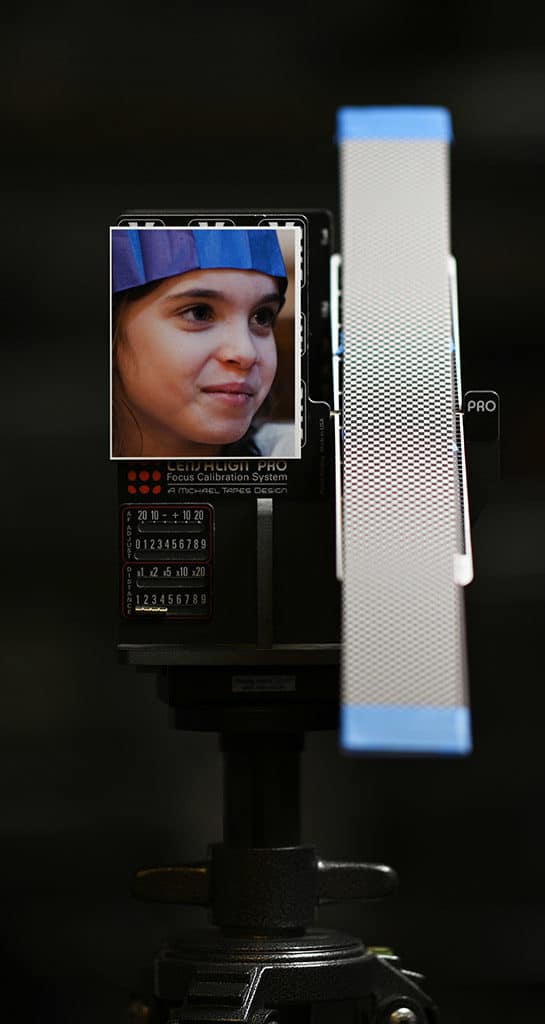 The previous test used a high-contrast target that was easy for the camera to focus on. This one is a bit more of a challenge. I also wanted a target that would activate the face detection feature of the camera in those AF modes that supported that.

With release priority set to Focus, and using an external intervalometer, alternating pre-exposure focus racking in the far and near directions, I made 16 exposures wide open with AF-S in each of the five main autofocusing modes: Pinpoint, Single, Wide S, Wide L, and Auto. I made the same number of exposures wide open with AF-C in each of the five main autofocusing modes: Single, Dynamic, Wide S, Wide L, and Auto. Then I made a set of the AF-C images with release priority set to Release. I brought all 240 exposures into a Matlab program I’ve written, and analyzed the focusing errors, converting them to the equivalent circles of confusion created by the measured degree of misfocus. Circles of confusion diameters cannot ever be negative, but I used the convention that I’ve used previously: positive diameters are due to back-focusing, and negative ones are due to front-focusing. I computed the mean and standard deviation of the each of sets of 16.  Here’s how it came out: 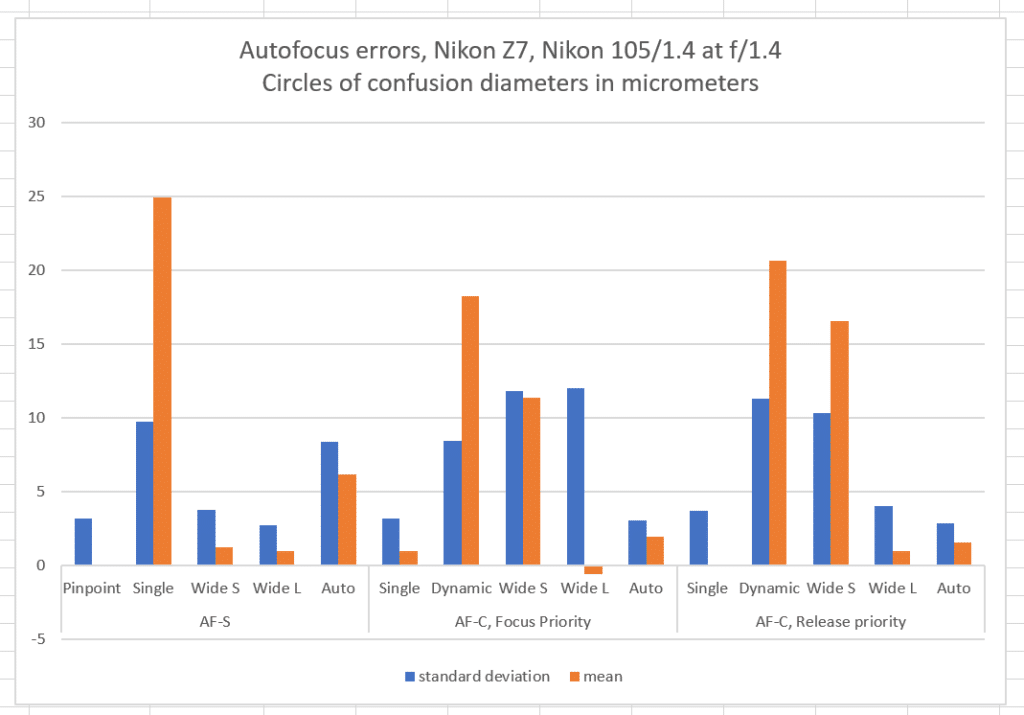 When you look at the above graph, remember that the Z7 pixel pitch is a bit over 4 micrometers, which means that CoCs less than that aren’t very far off at all.  The CoC threshold that is used to compute the standard depth of field tables is about 30 micrometers. With modern digital cameras, something that has a 30 um CoC looks pretty soft. The pinpoint focus mode, which uses CDAF, produces good average accuracy, and the standard deviation of 3 or so means that some of the captures will stand up to critical examination. The result of using the low-contrast target is a bit worse than the 1 um CoC standard deviation we saw with the easy-to-focus-on target.

Some of the PDAF modes result in significant back focus and scatter.  I had hoped that the Auto modes, which consistently recognized the face, would do better than the other modes, and two of them did about as well as the best of the PDAF modes, but the AF-S one was worse. In this test, Single AF-S with release priority produced a mean the saem as CDAF. Since Single with focus release priority did not, I’m putting this down to pure luck.

These tests were performed at f/1.4, 1/500 second, at ISO 64. That’s not a whole lot of light, but it’s by no means dark. I would expect the scatter shown by the large standard deviations above to get better in bright light, and worse in dim light. I will be doing further tests to verify or disprove that.