You are here: Home / The Last Word / An AA workshop in the golden era

I posted this picture of Ansel Adams on the DPR medium format forum. I made it in August, 1983, at one of the annual Friends of Photography Ansel Adams workshops at Weston Beach in Point Lobos, never printed it, and found it yesterday when I was going through some old negs for scanning. 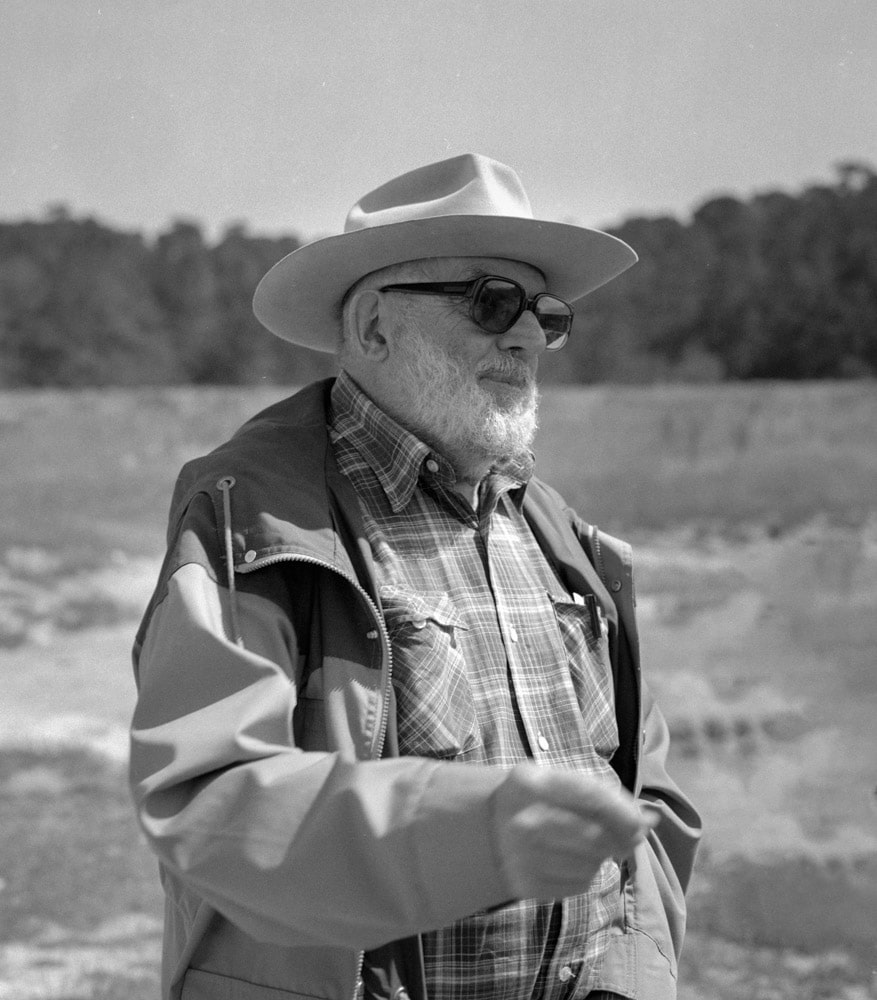 The workshop consisted of lectures, field trips, interaction with the instructors, and informal small-group discussions. There were maybe 50 or 60 students, and many instructors, including the following:

The FOP divided the students into groups of 7 or 8 people and assigned someone to each group to be the guide/facilitator/discussion leader. The person leading my group was Chris Rainier, who was Ansel’s assistant at the time. The students as a group were quite skilled; you had to submit a portfolio and be accepted into the greatly oversubscribed program. The AA workshops started out in Yosemite Valley, but by 1983 they had migrated to Carmel, California. It was an all-day affair for three days, with everyone staying at the same place. I can’t remember where, but it was either Asilomar or Stevenson School — I’ve done FOP workshops at both places, and some of the memories have faded with time. We all ate together, and Chris led great small-group discussions in the evening that ran past midnight.  John Sexton gave a lecture to the entire student group on printing, and led small-group tours and demos in his darkroom. Jerry Uelsmann also gave a lecture to everyone. He went into great detail about his process for making his composites, even to the level of describing some of the important tools and teaching how to make them.

Ansel himself gave small-group sessions at Weston Beach  and at his house in the Carmel Highlands, where he and Chris gave us a darkroom tour, he showed us prints, and answered questions. The DPR member asked:

Was  AA approachable, engaging? General demeanor? We’re you in awe?

I remember Ansel from the workshop as warm, charming, and good-humored. He was full of stories that you could tell had been oft-told. He tended to answer specific questions by enlarging their scope so that he could make points that he wanted to make. Ansel died eight months after this workshop. I had the sense that he was slowing down, and that he was happier treading the well-worn paths of his previous teaching — and by then he’d been teaching photography for a very long time — than focusing on establishing a relationship with his students. And yes, I was in awe. I still remember the darkroom tour vividly, and especially the story about treating the Moonrise negative with selenium intensifier.

One of the sessions that I remember well was with Eugene Richards. There were six or eight of us sitting around a table in the cafeteria when he walked in with a yellow Kodak 11×14 paper box. All through this workshop, and all the others I’d attended, the instructors and staff treated the prints with reverence. They were always mounted and matted, and handled with great care. Richards dumped the loose prints in the box — air dried, but not flattened and still wavy — onto the table, then flipped through them while telling us what was behind each one. Many were from the body of work that would later be published in Exploding Into Life. Aperture describes that book this way:

In 1978, 34 year old Dorothea Lynch discovered she had breast cancer. In an attempt to gain control over the disease and communicate her experience to others, she asked her longtime friend, photographer Eugene Richards, to visually document her struggle while she kept a written diary. Exploding into Life is the synthesis of their two experiences. What begins as their need to know the facts about cancer becomes, as the years pass, a highly personal inquiry into what it means to be alive, to face the uncertain future, and to accept death. The book that results is a testament to a woman’s strength, intelligence, and sensitivity as she confronts cancer, a medical care system, and cultural attitudes towards illness and mortality.

It all fit together. What Richards was telling us in his casual handling of the prints was that the objects weren’t important. But with the powerful images and the story behind them, it was clear that the images themselves, separated from their embodiment, were what we were supposed to connect with.

One of the great things about this workshop was that all the instructors weren’t cut of of the AA mold. Richards is a perfect example; leaving the fact that both made B&W prints almost exclusively aside, Adams was pretty much the antithesis of Richards. But Ansel recognized Richards as a great photographer, and that’s why he was there.

One of the great things about the living together workshop format is that you get to spend a lot of time talking photography with your fellow students. I learned a lot from that interaction.

When Ansel was alive, the FOP workshop programs were at a level that to my knowledge was never achieved before or since. I’ve been associated with the Center for Photographic Art in Carmel, CA for many years. The CPA uses the old gallery and offices of the FOP, who abandoned them when they decamped to San Francisco in the late 1980s after Ansel’s death. One of the mementos that the FOP left lying around the office when they spit was the workshop schedule for one year in the early 1970s. It was a who’s-who of the fine art photographic superstars of the era. And the prices were truly bargains. I’ll bet when Ansel came calling asking you to teach in one of his workshops, it was hard to say no.