You are here: Home / a7RIV / Relative sensitivity of Sony a7RIV and GFX 100S

I’ve been doing some comparisons of the GFX 100S and the Sony a7RIV, which which it shares a pixel architecture. One of the things I noticed is that the a7RIV appears to be more sensitive. When you open a7RIV files they are brighter than GFX files shot at the same ISO setting and exposure.

I decided to explore that discrepancy. I put an Otus 85 mm f/1.4 lens on the a7RIV, and made some exposures of a more-or-less featureless wall at ISO 100, f/8, and 1 second. The I set the GFX 100S to 35 mm crop mode, put the same lens on it, and shot some images at the same ISO and exposure.

I developed the images in Adobe Camera Raw 13.2 in ProPhotoRGB, exported the files as TIFFs, read them into Matlab, and plotted histograms of the green channel. 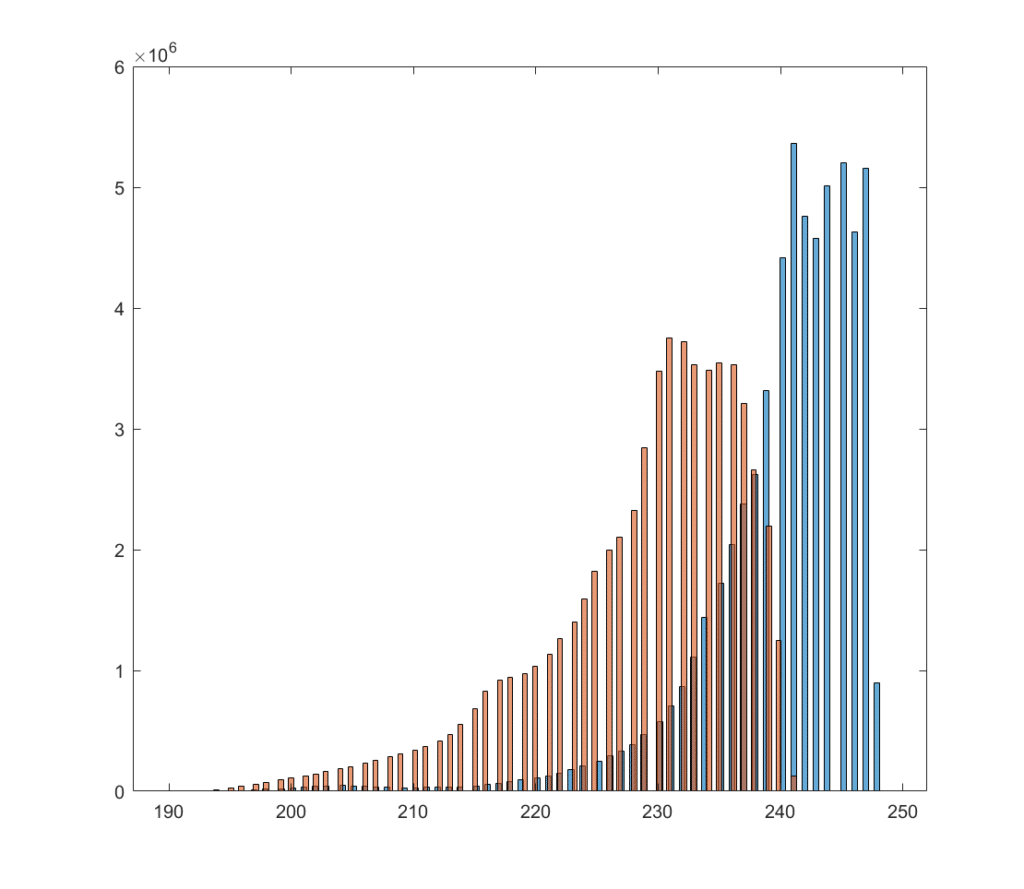 The red is the Fuji file, and the blue is the Sony one. the Sony image is much brighter.

Digging deeper, I looked at the raw histograms of the two files.

The red channel of the GFX appears to be substantially more sensitive than the a7RIV. With the blue channel, it’s the other way around, although not ot such a  great degree. The green channels are about the same, with the Fuji being a bit more sensitive.

You can see that by looking at the average values; 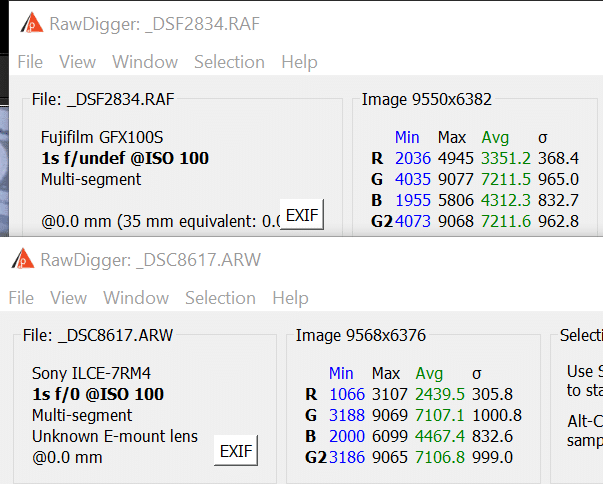 So the apparent difference insensitivity of the two cameras comes down to the way the ACR and Lightroom treat the files by default.

I don’t much care about the default brightness behavior of ACR and Lightroom. You can override that, and you’re going to tweak the files in the raw development process anyway. What’s important to me is how the raw file counts behave with exposure. That’s how I determine the right exposure for a scene (well, at shooting time I can’t actually see the raw data, but there are ways to approximate that in the EVF). At base ISO, I want the brightest significant parts of the image just short of clipping in the raw file. That gives me the best starting place for raw development. And this test shows that, at base ISO, the two cameras are about equally sensitive.

And no, it doesn’t matter much to me how base ISO is marked on the camera. On these two cameras, base ISO happens to be marked the same. But picking the number for base ISO is a decision that the camera manufacturer gets to make, within CIPA guidelines that give plenty of wiggle room. With a few exceptions, the sensor raw sensitivity at base ISO in a camera is determined by several things:

How the number attached to the base ISO is determined doesn’t affect any of those.

ISO is used by automatic and “match-needle” exposure systems, but I don’t pay any attention to those.

I plan to repeat this test with slightly different circumstances to double-check the results. I am concerned that the Fotodiox F-to-G adapter may have been restricting how far the lens can stop down.

OK, here are the results of another, similar test, this time with an artificial light source, an Aputure 120D at 5500K with a softbox diffuser. Same lens, this time set to f/16. 1/50 second shutter speed. 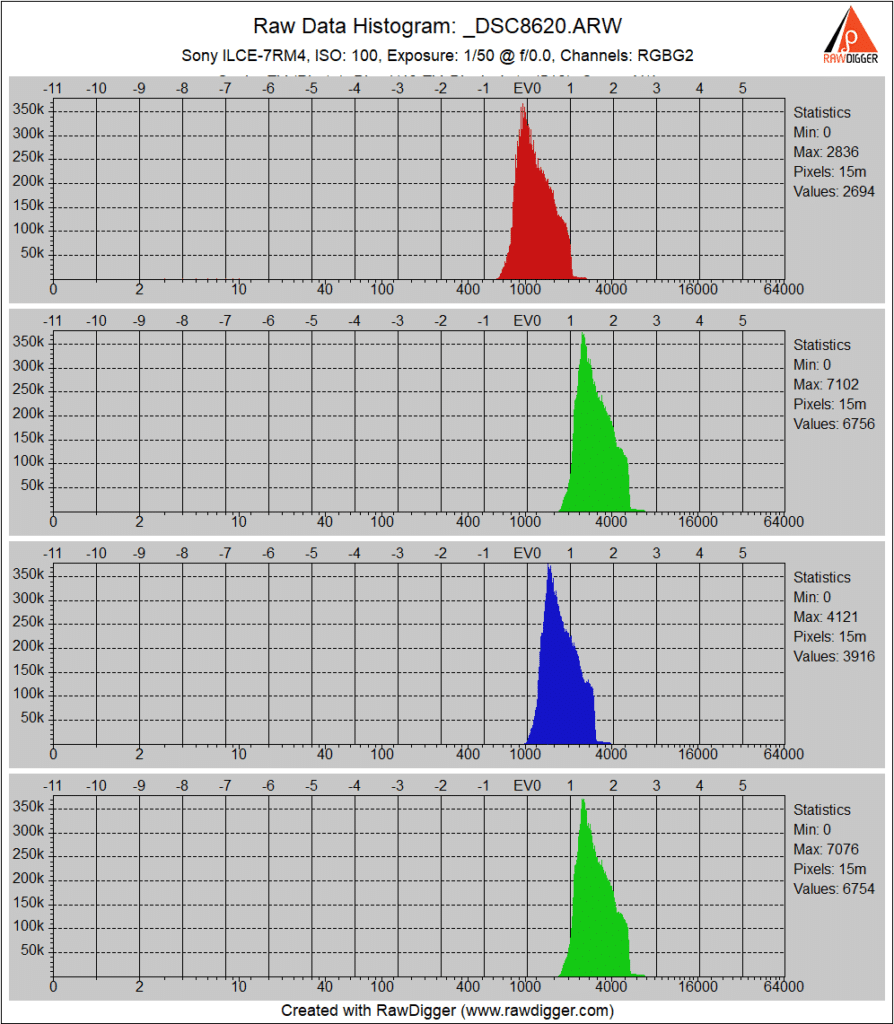 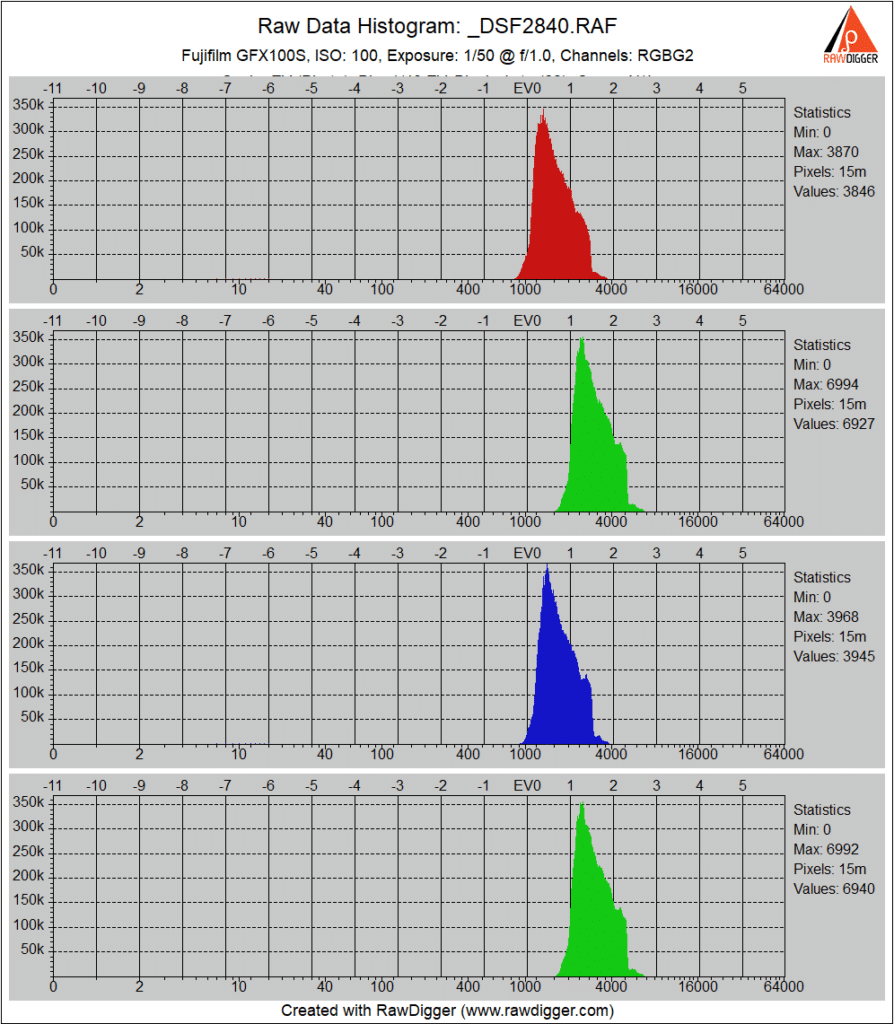 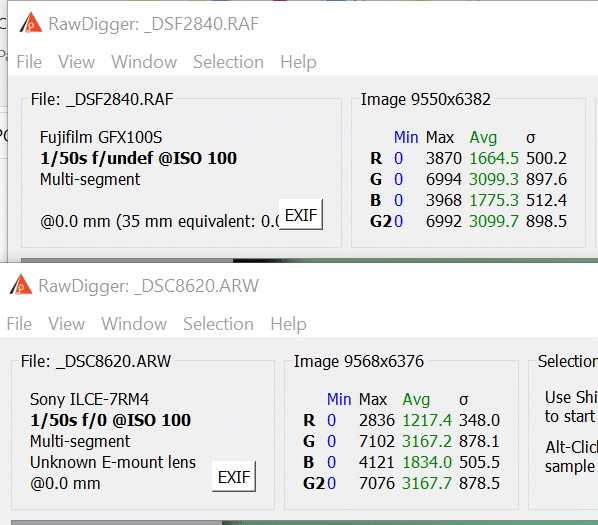 If we plot the G1 channel raw histograms on the same plot, here’s what we see: 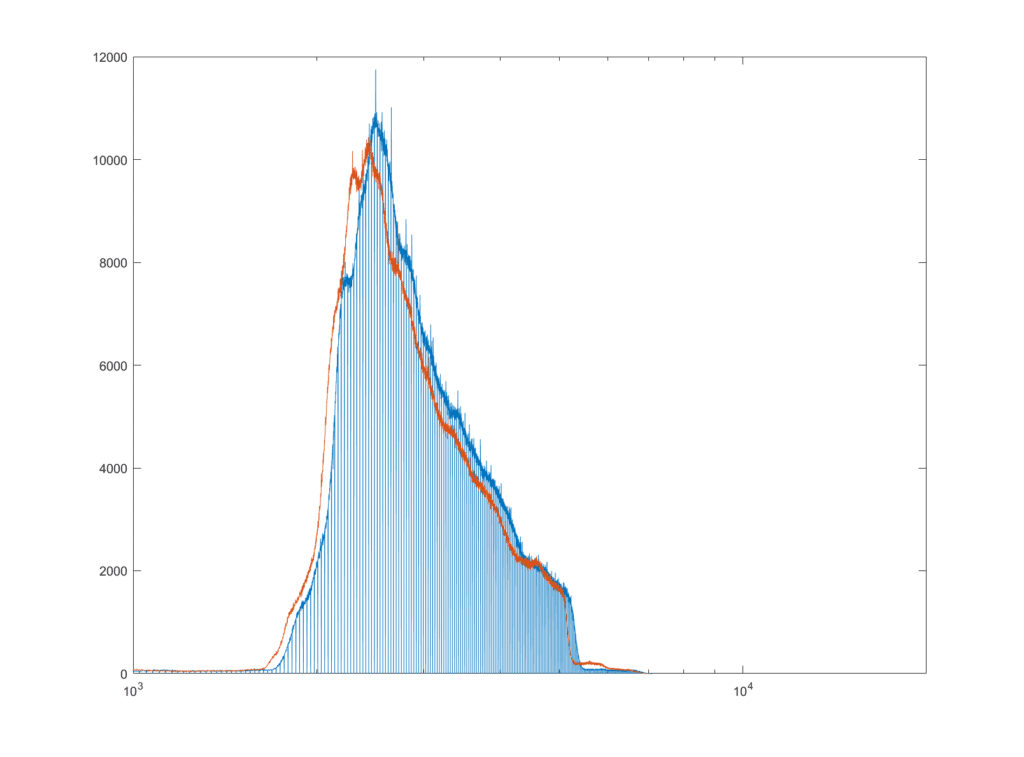 The vertical lines on the Sony histogram, which is in blue, result from the camera’s use of digital gain for calibration.

And, by the way, the GFX 100S and GFX 50S have essentially the same sensitivity, in spite of the GFX 50S having smaller-than-usual microlenses. 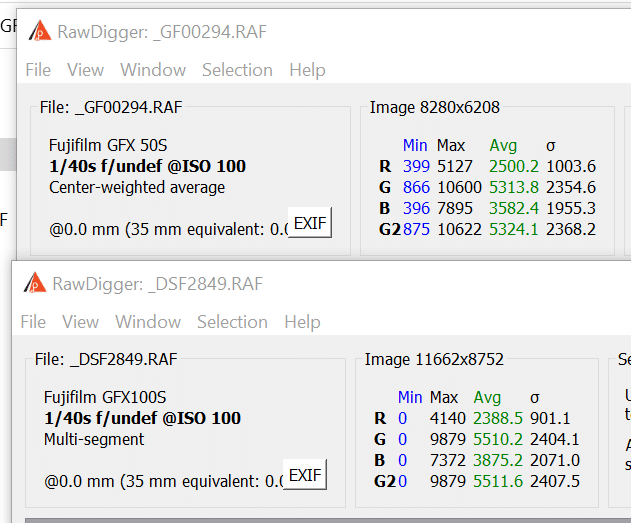