I continue to get complaints for people who are having trouble with the pixel shift feature on the GFX 100S. My own experience is that it is not usable for landscapes without moderate to considerable work in postproduction. But that’s not the fault of the pixel shift implementation; rather it’s the fault of having a camera mode that depends on the camera and subject being immobile during the set of exposures.

I’ve done some Siemens Star and slanted edge pixel shifted shots, and I found it mostly fine, with a slight combing effect on the slanted edge test that wouldn’t be an issue in real-world photography.

Today I’ll show you the results of a test that more approximates the real-world usage that I’d expect to see for pixel shifting. It does have some artificial elements, because those are the best way to show the advantages of pixel shifting, and to catch problems with the technique.

I mounted the Fuji 23 mm f/4 lens to my GFX 100S, put the camera on a Arca Swiss C1 head on a set of RRS legs. The room was on the second floor, so some vibration was to be expected. There were several operating computers in the room, each contributing fan vibrations. In addition, there was an air purifier — it’s allergy season — a few feet from the tripod. I figured all those potential vibration sources constituted a typical indoor environment. I set the lens to f/5.6, and made a set of 16 pixel-shifted exposures. 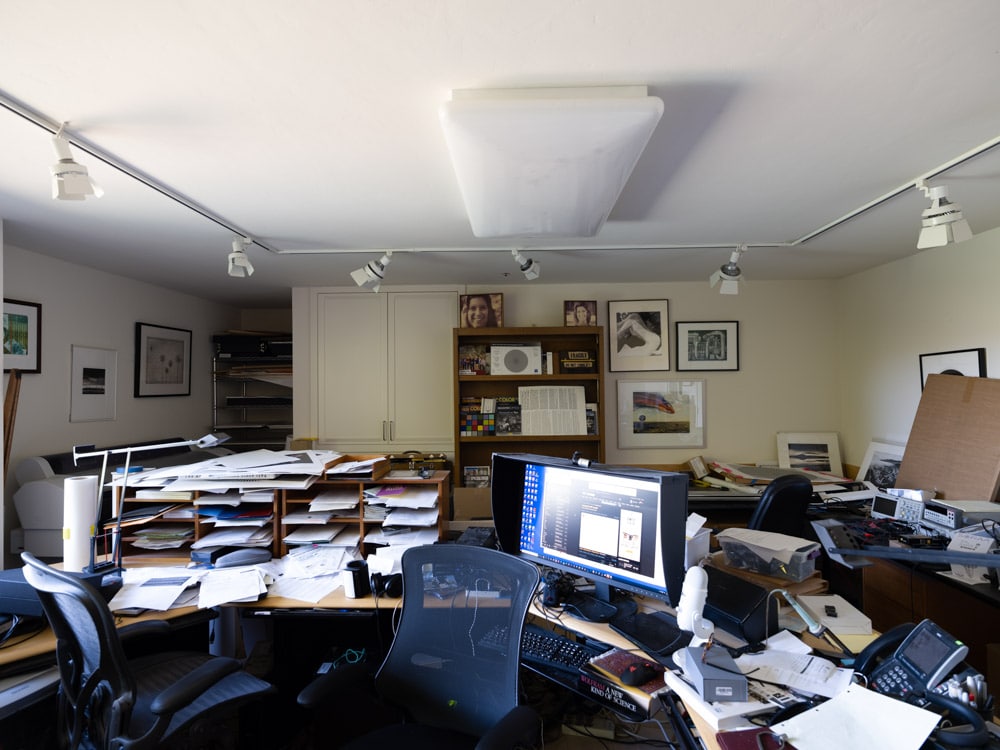 I created the composite DNG file using Fuji’s Pixel Shift Combiner. I brought that file and the first image from the set into Lightroom. The images had different white balances, which is something I’d noticed before. I white balanced each to the background on the text page (you’ll see that page a bit further on). I set the sharpening on the base image to Amount = 25, Radius = 1, and Detail = 25. I set the sharpening on the pixel-shifted (double sized) image to Amount = 25, Radius = 2, and Detail = 25. That gives equivalent sharpening at the picture level.

Here’s a look at the Zeiss version of the Siemens Star at the same field of view (about a 130% enlargement for the pixel shifted image, and twice that for the base image).

The extinction resolution is about the same, but there is far less aliasing in the pixel-shifted image. I don’t see any evidence of misalignment on the part of the Fuji Pixel Shift Combiner.

Now we’ll look at the text page at about a 70% magnification for the pixel shifted image, and twice that for the base image:

Going to a bit under 200% for the shifted image and twice that for the base image, we can see what the aliasing does to legibility:

Looking at an area were there is some solid color at the same magnification as immediately above, we can see that there is less noise in the pixel-shifted image.

How about a slightly out of focus object?

Legibility of the button legends is improved. I don’t see any artifacts.

Here’s a quite out of focus object:

Pixel shift didn’t make it any better, or any worse.