A few days ago, I set out to measure the shutter shock of the a7RIII and a7RIV. You’ll notice that there has been a gap in my nearly-daily postings, and it’s not for lack of trying. I’ve run into some difficulties. In my first run of tests, I ran into two serious issues, either one of which would have made me have to throw out all the data and start over.

The first was just a dumb move on my part: I accidentally left IBIS on in both cameras, even though they were mounted on a tripod. This contaminated the results, especially those at low shutter speeds. I think the main mechanism for this was the IBIS recentering the sensor after it had been decentered by its attempt to deshakify (that’s a technical term) the previous exposure.

The second was an unplanned side effect of a well-meaning decision. Fearing that initial errors in manual focusing could make comparisons between cameras difficult, I chose to use autofocus. Unfortunately, in many cases, the shot-to-shot scatter due to autofocus errors was at least as large as the effect I was trying to measure, making it hard to make sense of the results.

Back to square one, I tried again. Out of concern for focus shift during 500-shot series, I put away the 135 mm f/2.8 Batis native E-mount lens, and took out a 135 mm /f2 Zeiss Apo-Sonnar F-mount lens and a Kipon F-to-E adapter. I set the compression to none, the ISO to 100, the lens to f/4 and mounted the cameras in landscape orientation in turn to a 5-section Gitzo travel tripod with a light RRS ball head, using adapter plates on the body of the cameras, which is the most stable location with the cameras in landscape orientation. I did not use portrait orientation, which would accentuate the effects of the shutter motions on the a7x cameras, since I don’t yet have an L-bracket for the a7RIV. 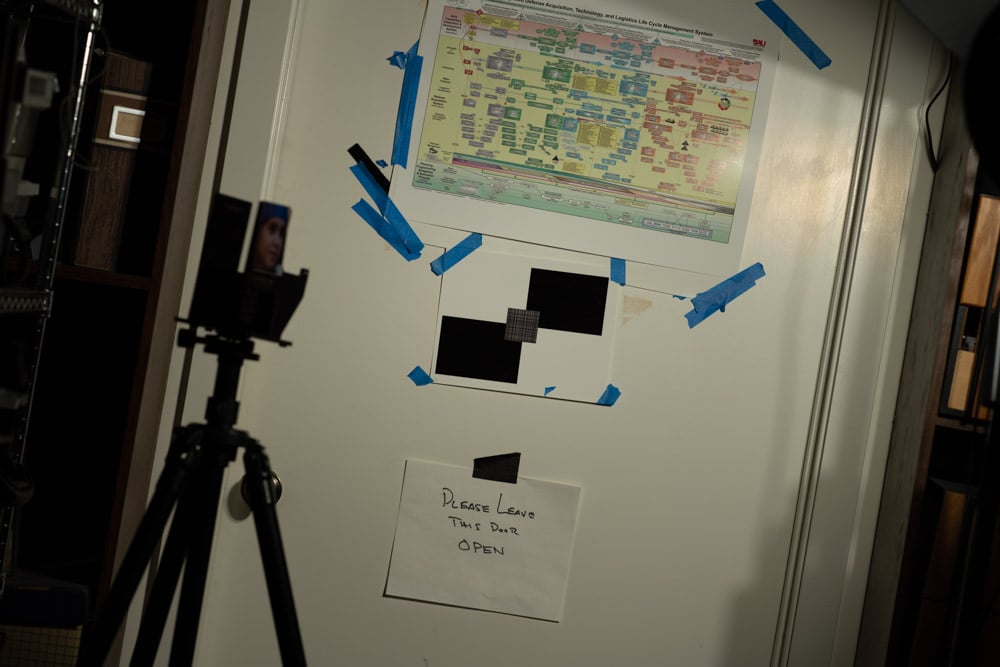 I lit my slanted edge target with an Aputure 120d II LED light with a 12-inch parabolic reflector mounted and the light set to 5500K. I focused once on the target and made all subsequent exposures (about 500 of them) with each camera without changing the focus. Using a remote release and A exposure mode, I made 16 exposures about 1 second apart at each setting with the light adjusted to give me shutter speeds of

I processed all the files in Lightroom, with white balance set to flash, sharpening and noise reduction turned off, and all other settings at default. I exported crops of the slanted edge target as TIFFs, and computed MTF50, which is a good proxy for sharpness, using Imatest. Then I analyzed the statistics of the sets. Here’s an analysis of one of the horizontal edges in the target with the a7RIV shutter set to mechanical, electronic first curtain (EFCS) and fully electronic (what Sony calls Silent Shooting). 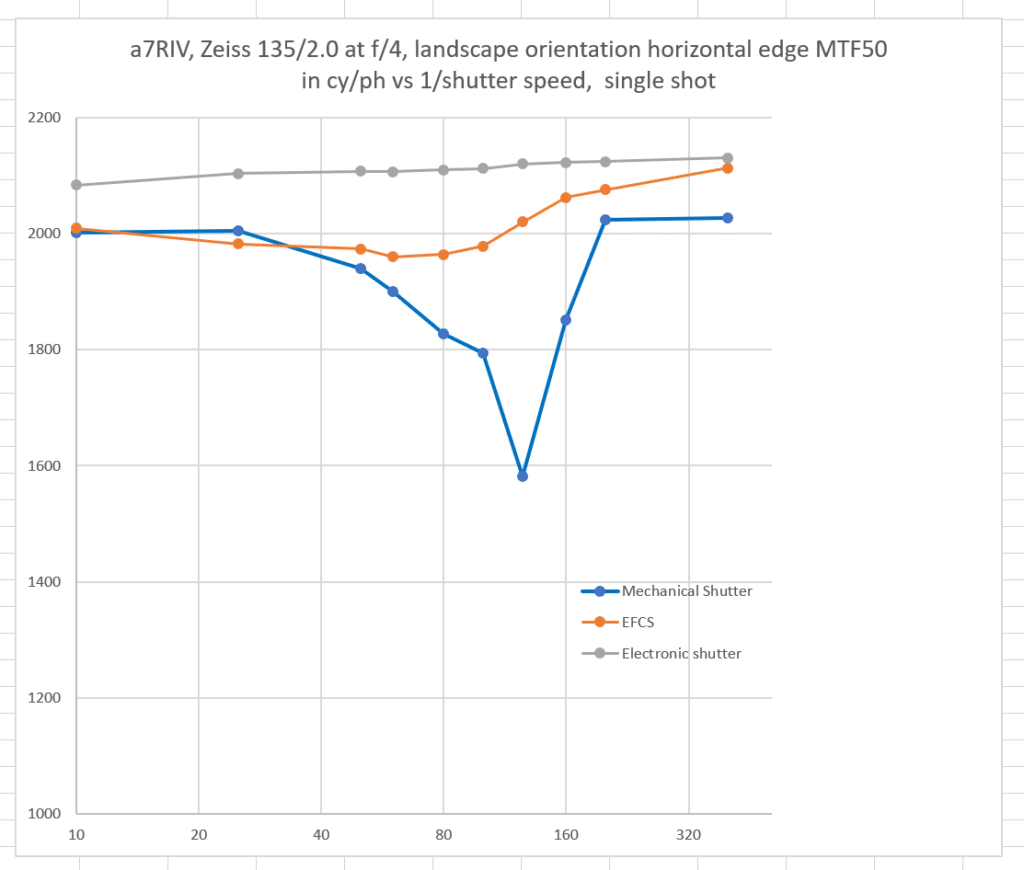 The vertical axis is average, or mean, or mu of the MTF50 (the spatial frequency where the modulation transfer function is 50%) measures in cycles per picture height. The horizontal axis is the inverse of the shutter speed: if you see 160, it means 1/160 second. The dark blue line is for the mechanical shutter, and the blue dots are the measured points.The mechanical shutter curve behaves pretty much as expected. At high shutter speeds, there is little blur because the camera doesn’t have much time to move while the shutter is open. At low speeds, most of the vibrations have damped down during most of the time the shutter is open, so there’s not much blur. In between, there is a point where the resonant frequencies of the camera/lens/head/tripod assembly conspired to do damage to image sharpness. In this case it’s 1/125 second. With EFCS, there’s less vibration because the camera doesn’t have to wind and release the shutter just before the exposure. With electronic shutter, there’s the lease vibration of all because no part of the shutter assembly moves either before, durning, or after the shutter is released.

You might ask why the electronic shutter is better than EFCS in this case. There are  two possible reasons, and they both probably play a part. First, the second curtain itself induces vibration. This mostly affects higher shutter speeds. Second, the vibrations from the exposure one second before the current one may not have completely died away. That mostly affects lower shutter speeds.

So far everything is working as expected. In the next picture, which is the same graph except the data is from the a7RIII exposures, you’ll see a situation where that isn’t true at all. 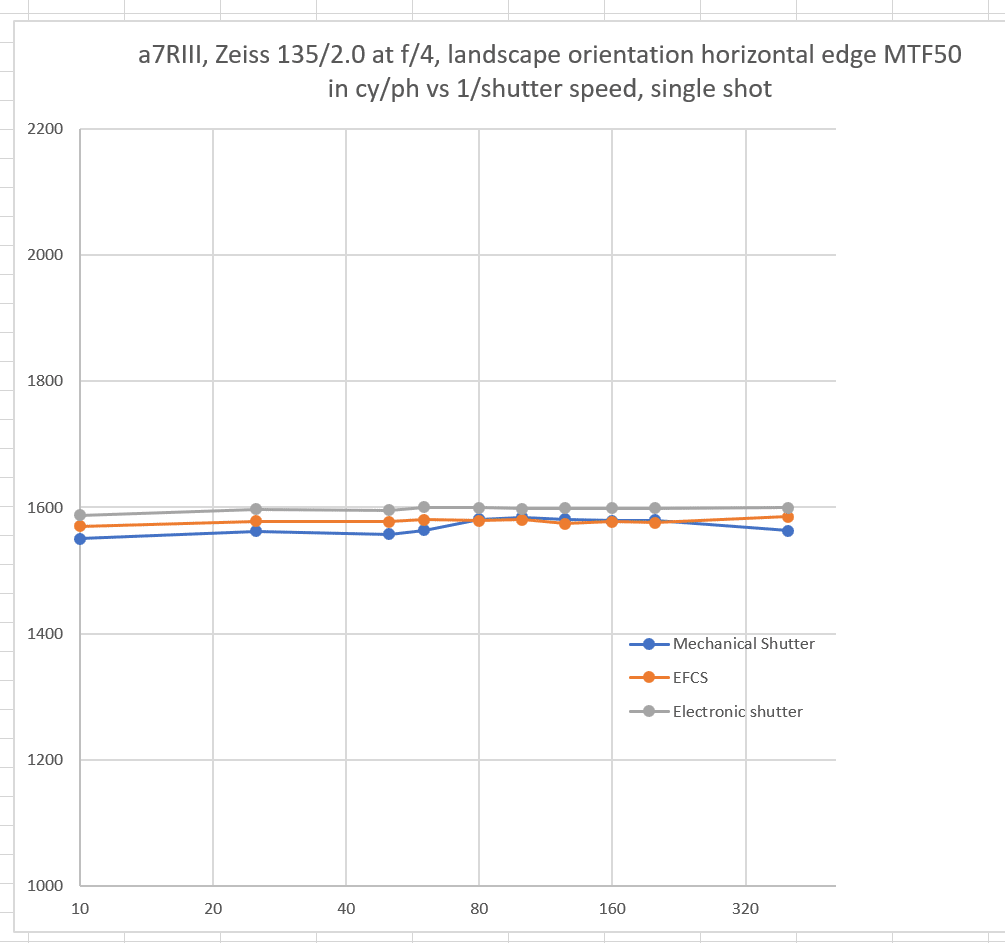 I can’t explain this. Maybe the sun and moon and stars aligned so that there was vibration cancellation. I went over the data several times, and double checked the EXIF information to make sure the cameras were set up the way I thought they were, and reran Imatest on another horizontal edge, but I didn’t find anything untoward.

Here’s the mechanical shutter data for both cameras: 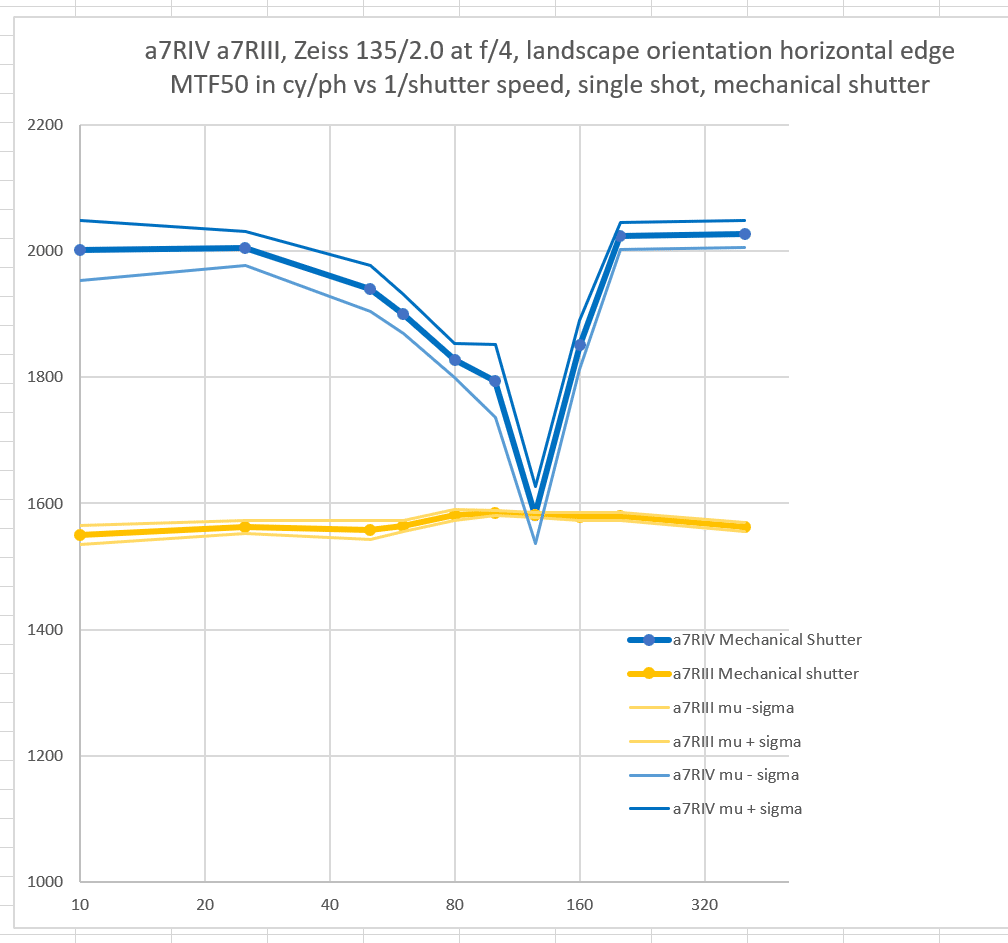 Here’s the same set of curves for EFCS: 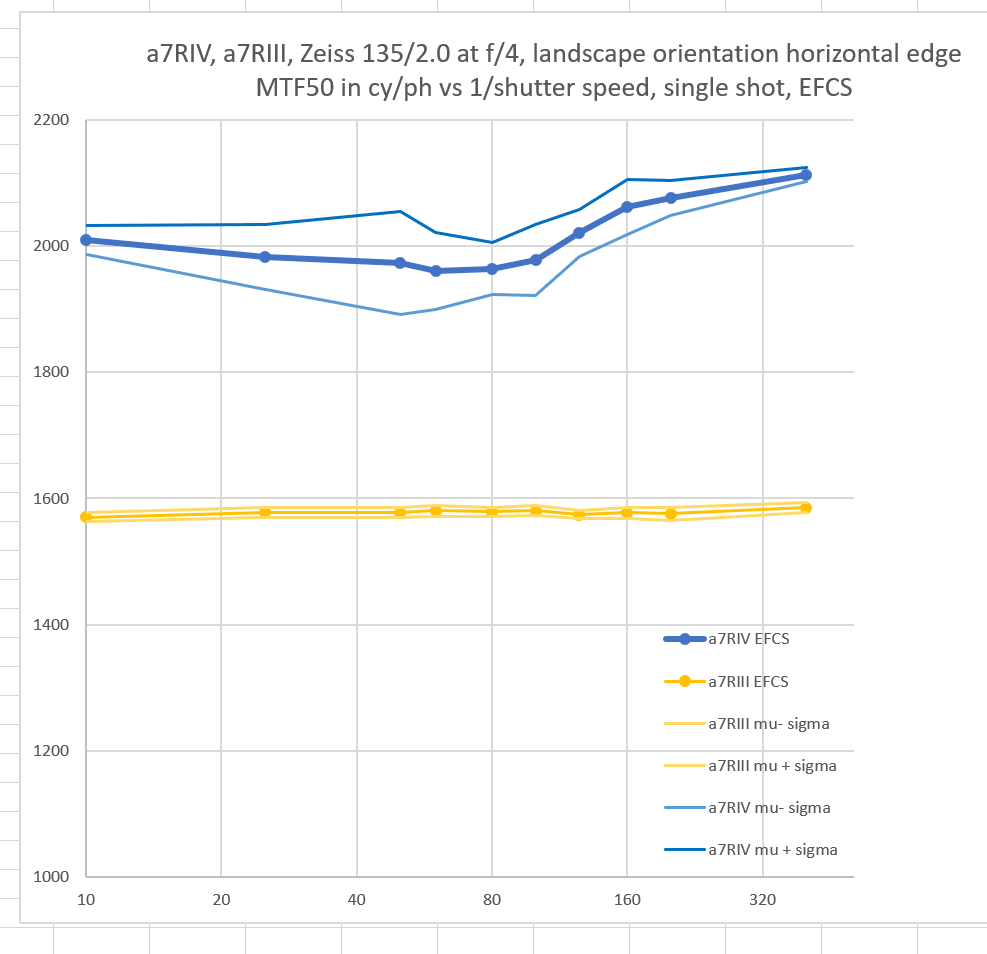 Now let’s look at the vertical edge, first for the a7RIV: 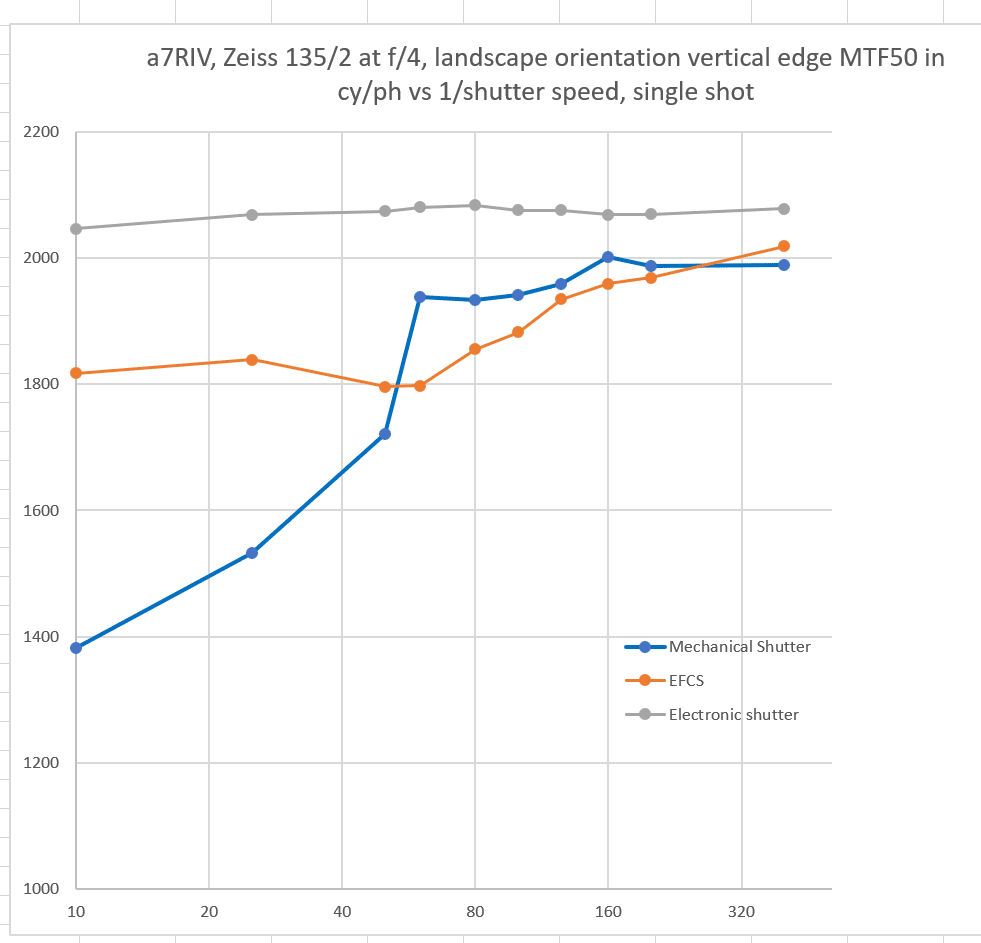 Now, except for the electronic shutter case, we see blurring at longer shutter speeds. This is because the side-to-side vibrations take longer to die away, and all but the first shots are affected by the shots that came before, and mostly by the shot that came immediately before. 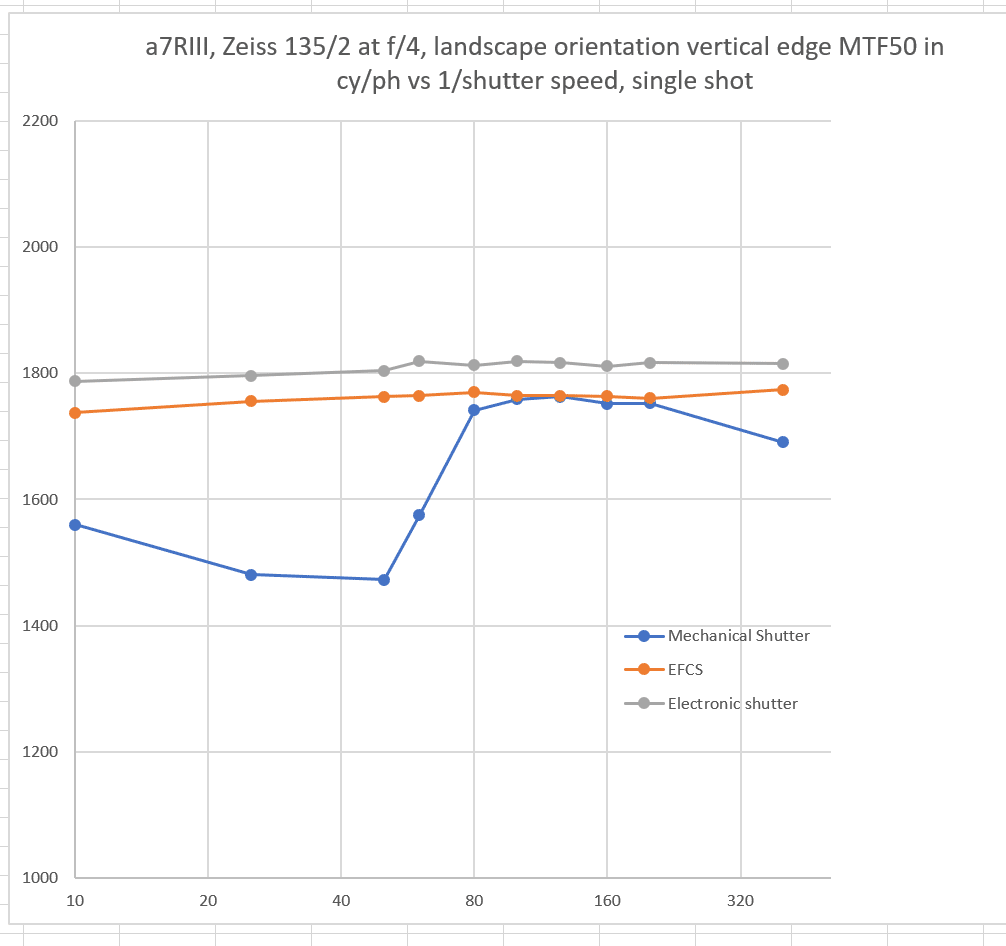 That EFCS line appears too good to be true, but I double-checked the data.

Mechanical shutter with both cameras: 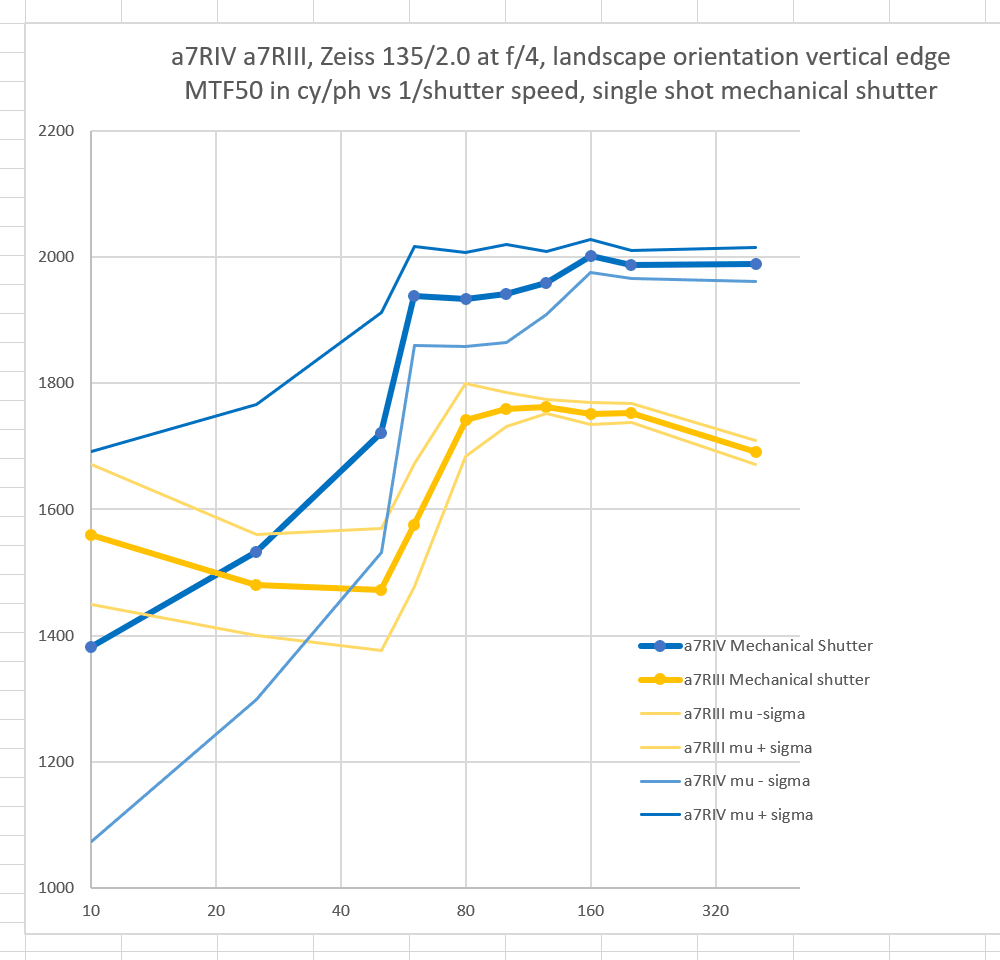 EFCS with both cameras: 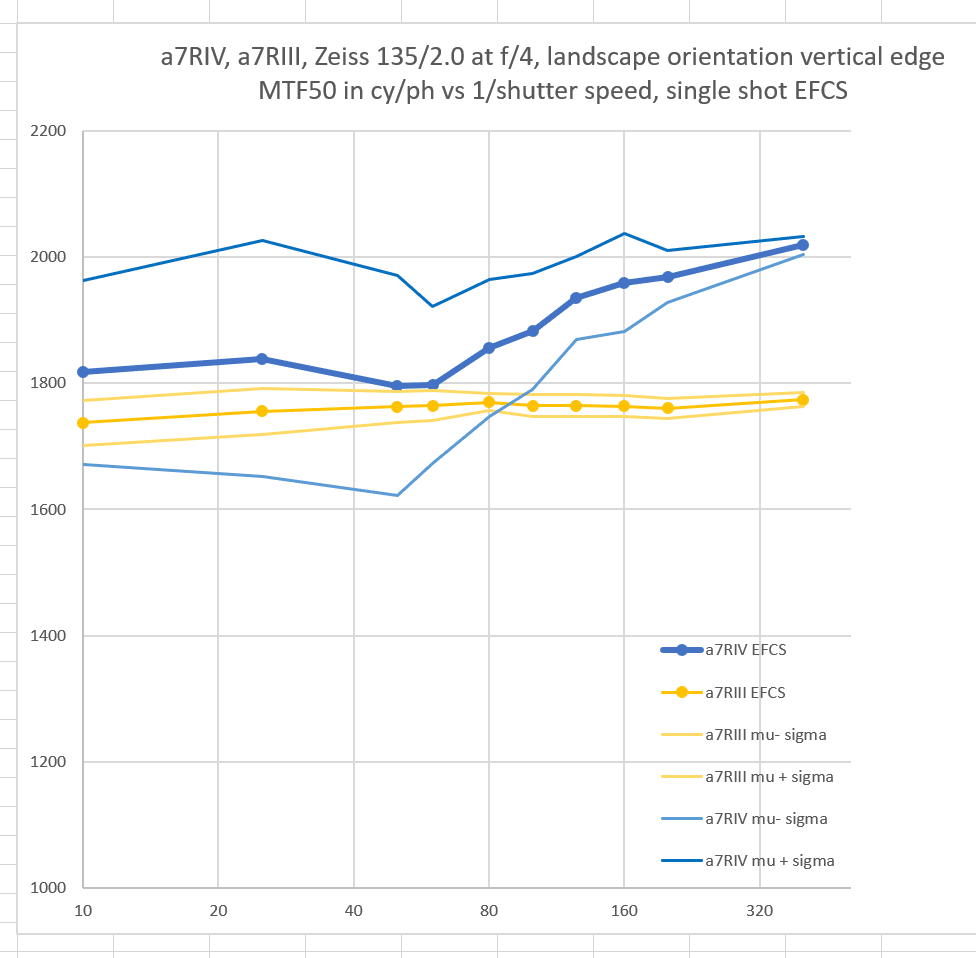 I don’t know why the a7RIII looks so good here.