At the a7RIV announcement, Sony used language that made many think that the camera made impressive strides in dynamic range over its predecessor, the a7RIII. Now that I have the a7RIV in my hot little hands, I can disabuse you of any such thoughts.

I will compare three cameras: the A7RIII, a7RIV, and the Fujifilm GFX 100, which uses a Sony sensor with the same pitch as the a7RIV. I have only one sample of each, so there may be some sample variation that would prevent others from replicating my results. Here’s a plot of shadow noise performance of the three cameras: 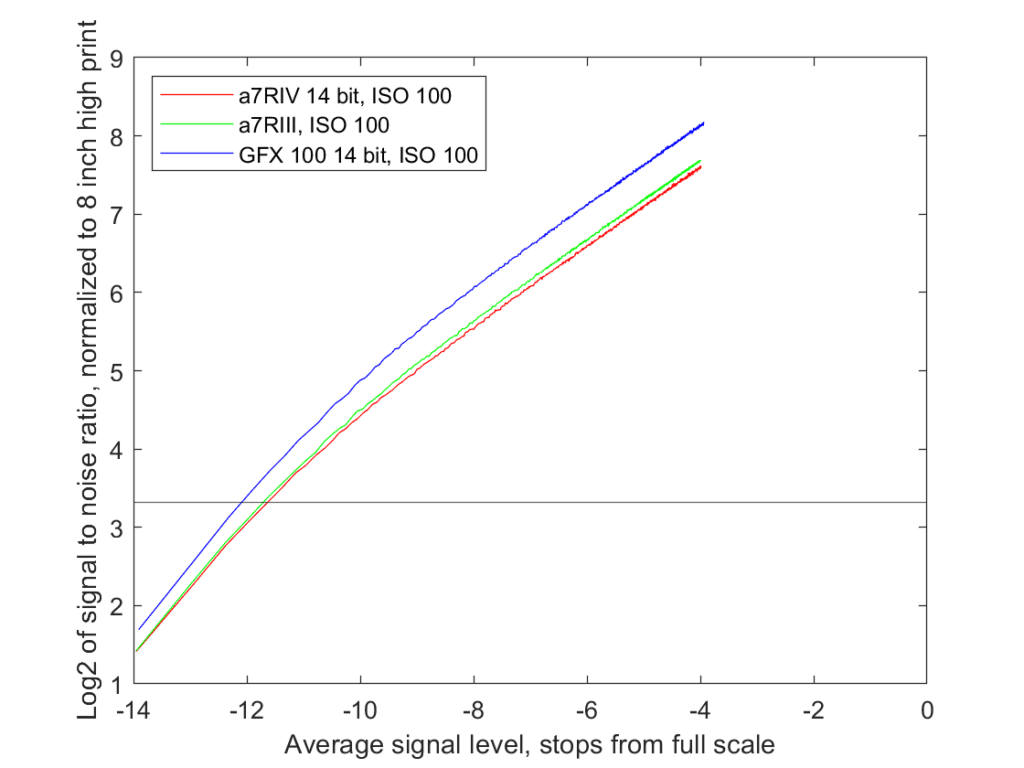 Let’s dissect the above graph. The horizontal axis is the mean signal level in stops from full scale. The rightmost part of the graph is 4 stops down from full scale, so we’re already at middle or dark gray there, and it gets darker as you go to the left. The vertical axis is the signal to noise ratio (SNR) normalized to a 1600-pixel-high print.  The black line at 3.3 marks the Claff PDR threshold (log base 2 of 10 is 3.3). The Claff PDR is measured by looking at where each curve crosses the black horizontal line. On the right side of the graph, the most important determinant of the SNR is the full well capacity (FWC) of the camera. On the left, the read noise comes into play. Higher is better.

The a7RIV trails its predecessor by a small amount in the brighter portion of the image. The GFX 100 does better than both by virtue of its greater sensor area.

Here’s the highest ISO where all three cameras are employing their respectively lowest conversion gain: 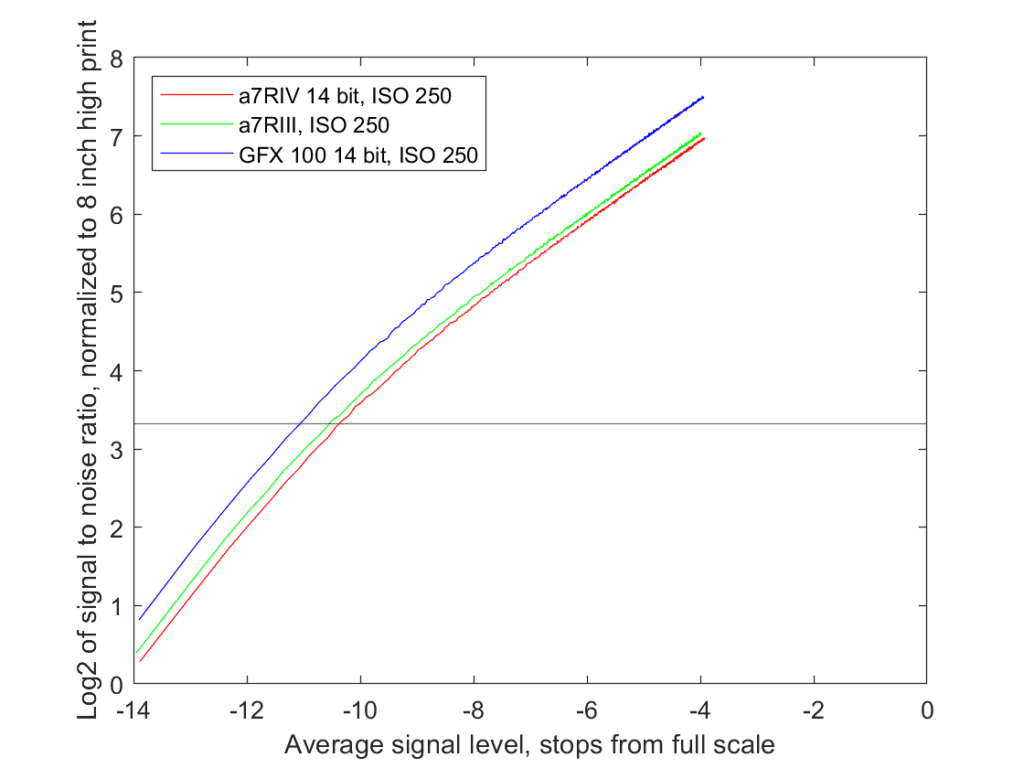 At ISO 320, the a7RIV increases its conversion gain, and the other two cameras do not: 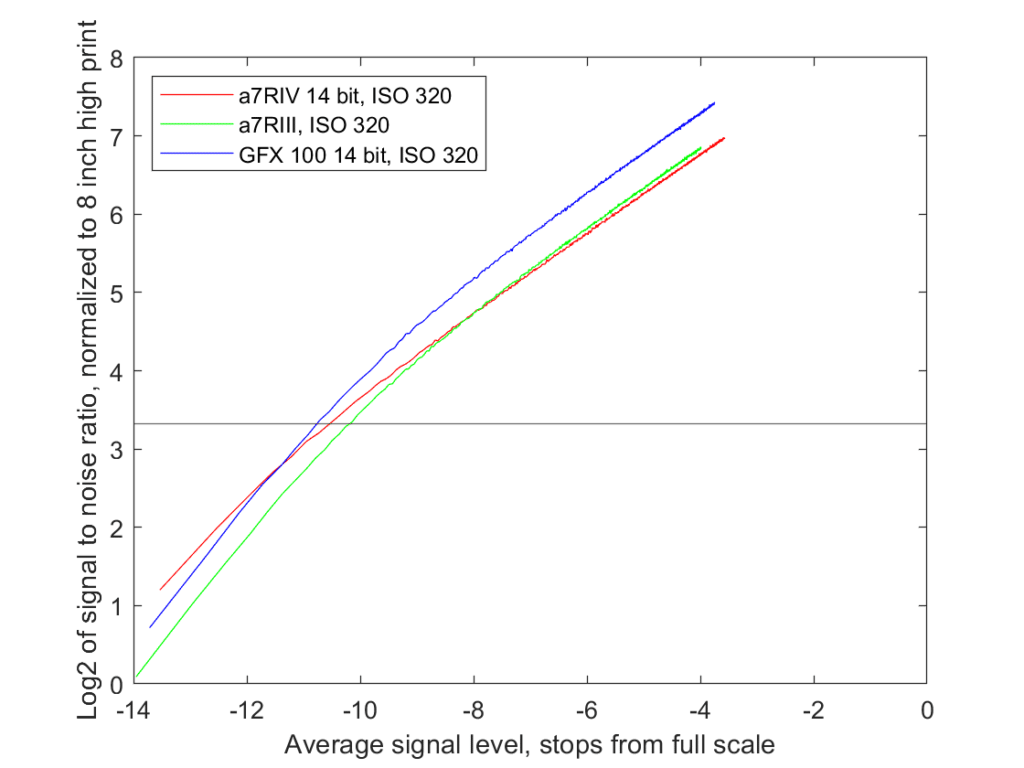 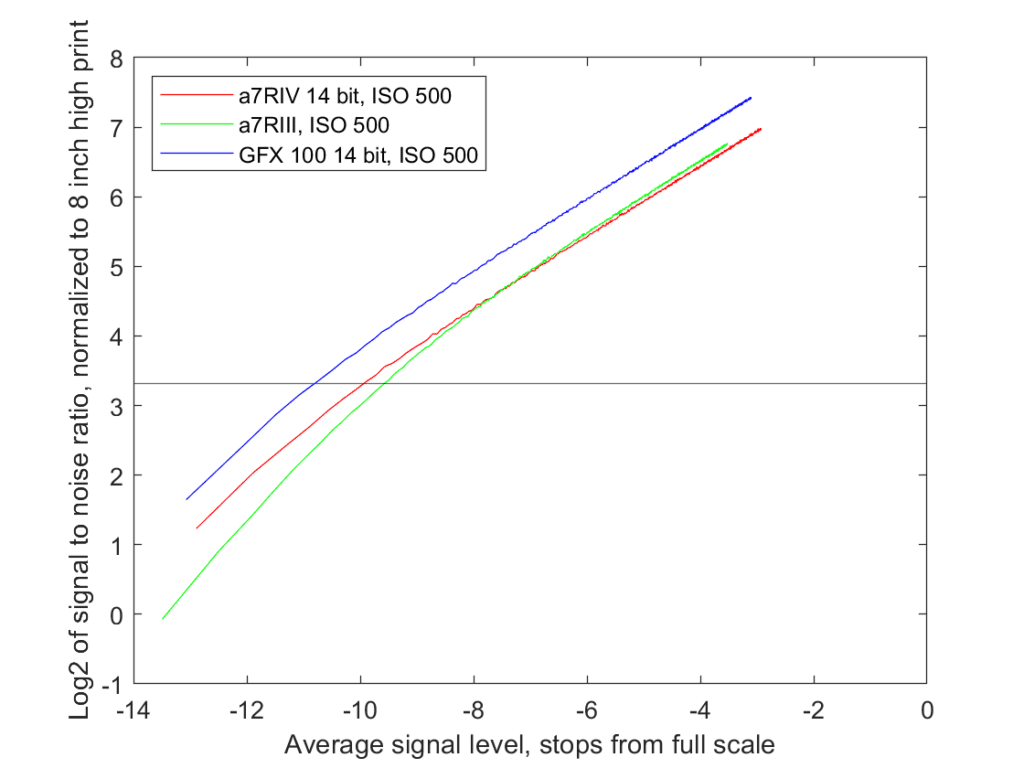 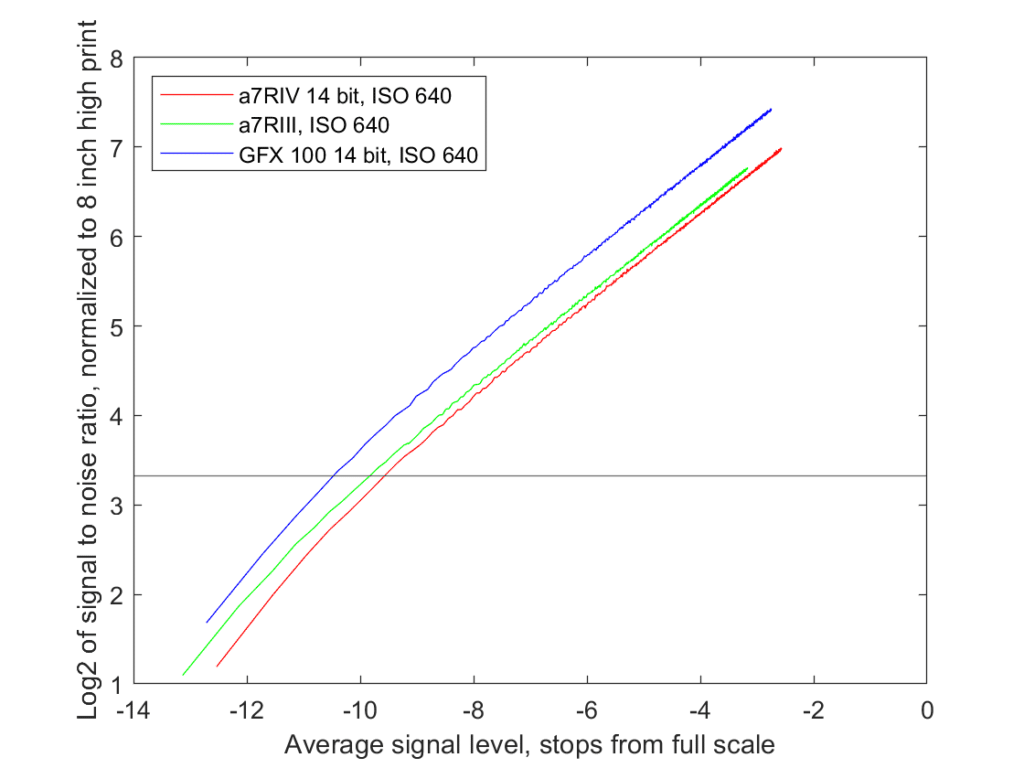 And that’s pretty much the way things stay as the ISO climbs: 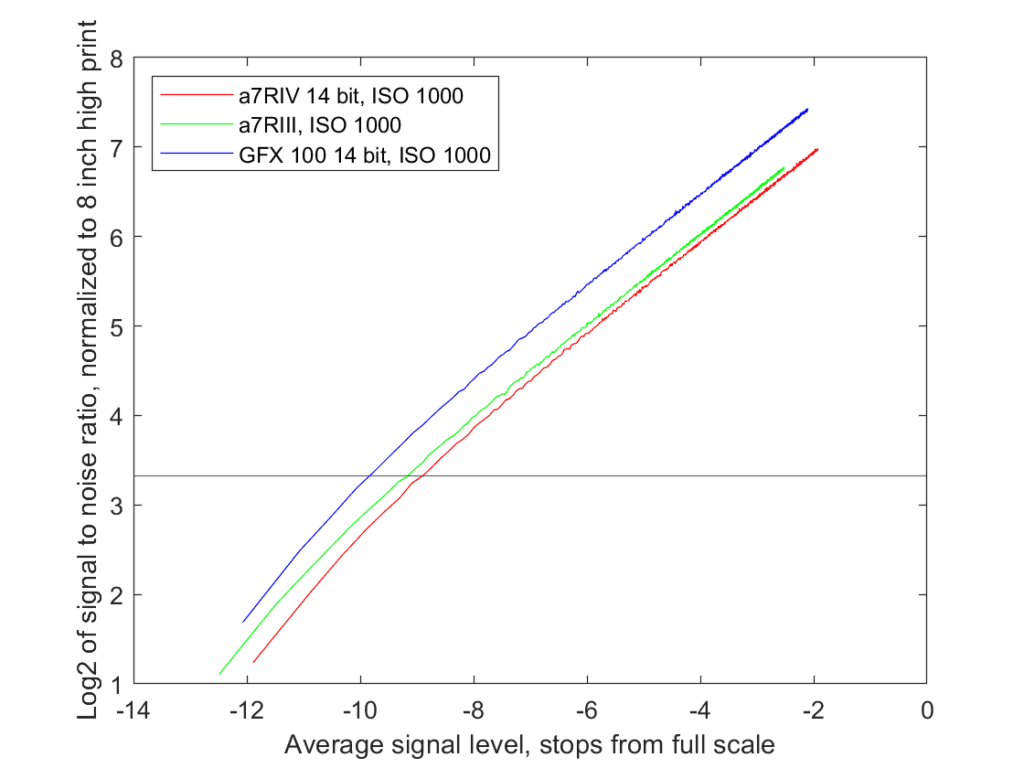 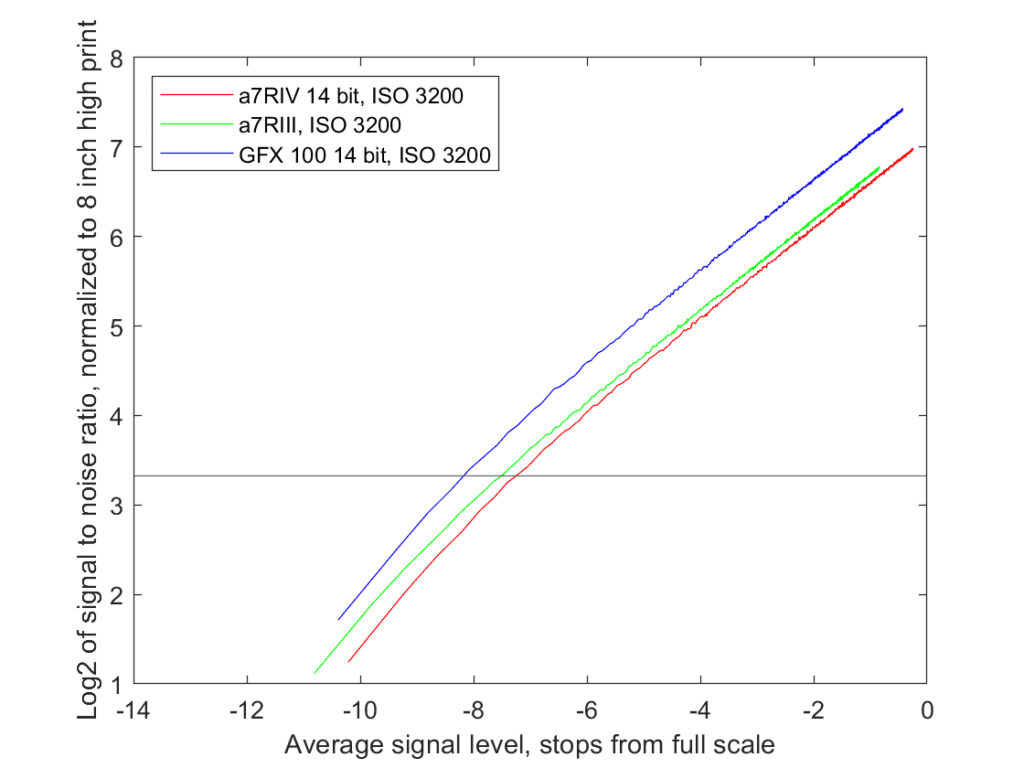 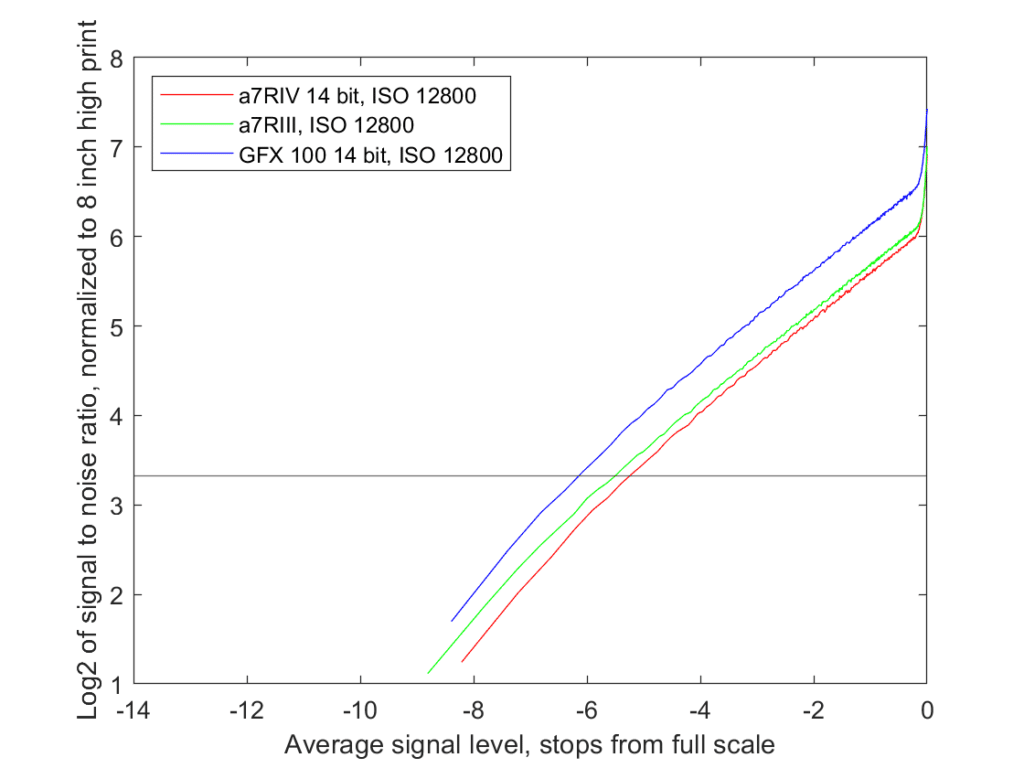 My a7RIII seems to be a bit better than average from what I’ve seen on the ‘net, but I don’t think there’s any way that someone can make the claim that the a7RIV is a significant step forward in terms of dynamic range. That doesn’t make it a bad camera; all three of these have excellent DR.