There have been web anecdotes about the GFX 100 files needing a lot of sharpening, and speculation that it’s because the raw converters aren’t dialed in for the camera yet. I, too, am interested in this topic, but from a different perspective. I would like to know if the GFX 100 raw files themselves are more or less sharp than the GFX 50S and GFX 50R files at a pixel level, and also whether they are sharper at a picture level.

Fortunately, I have a way to find out: my focus-bracketed razor-blade slanted edge MTF test. To perform this test, I backlight an ordinary — well, they used to be ordinary — double edged razor blade, make a series of exposures at different focused distances,  and analyze the raw files with a MatLab program I’ve written which uses MTFMapper to perform slanted edge analysis of the four raw planes. A tip of the hat to Frans van den Berg for doing such a great job with MTFMapper, and one to Jack Hogan for some of the Matlab code.

Here’s the first shot of the 500-image series, with the lens set to f/2, and focused a hair in front of the razor blade’s edge. 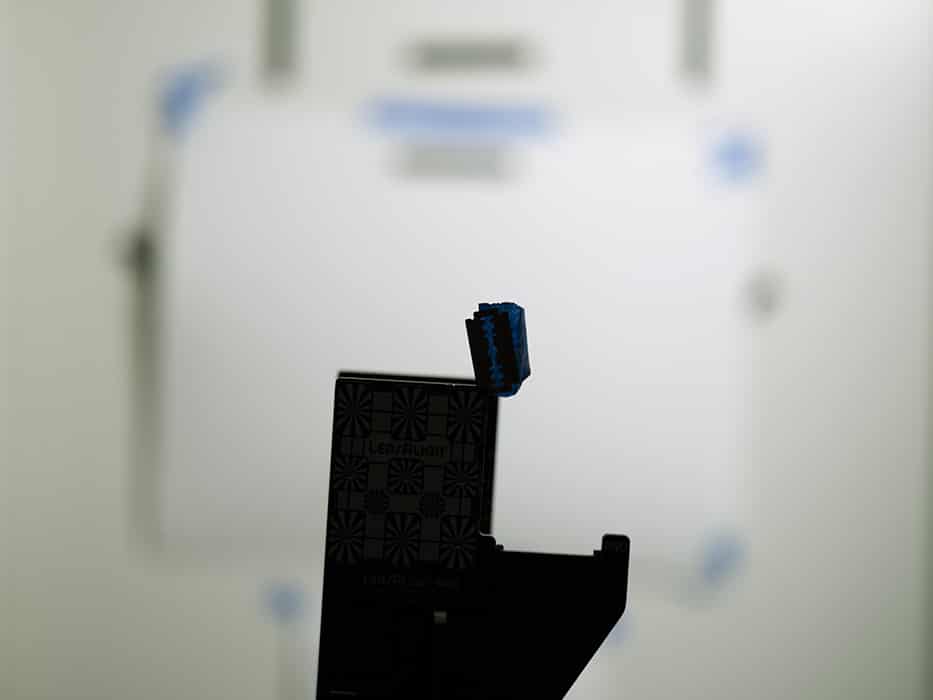 In the past, I’ve used a Cognisys motorized rail to automate the focus shifting. It’s a precise technique, but it’s fiddly to set up, and takes a long time to run, since you have to wait at each step for some time after the motor stops, so that vibrations can die down. For this test, I decided to use the focus bracketing feature of the GFX 100. As in the case of the GFX 50S, to use this feature, you focus to the closest distance of the series, and tell the camera how many exposures it should make, how long it should wait between each one, and what should be the size of the focus step between each exposure in the series. The camera then takes into account the f-stop to hold the circle of confusion constant, and exposes a series of raw images that you can later process. I used the GFX 100’s electronic shutter for this series, so I set the wait time to zero.

I used a 5600 Kelvin light source, ISO 100, and one-third stops between f/2 and f/5.6 inclusive. Usually I do whole stops, but, as a side project, I was interested in finding the sharpest aperture of the 110/2 in this test.

After I unwound the corrections the camera makes to hold the CoC constant with f-stop, I got this data: 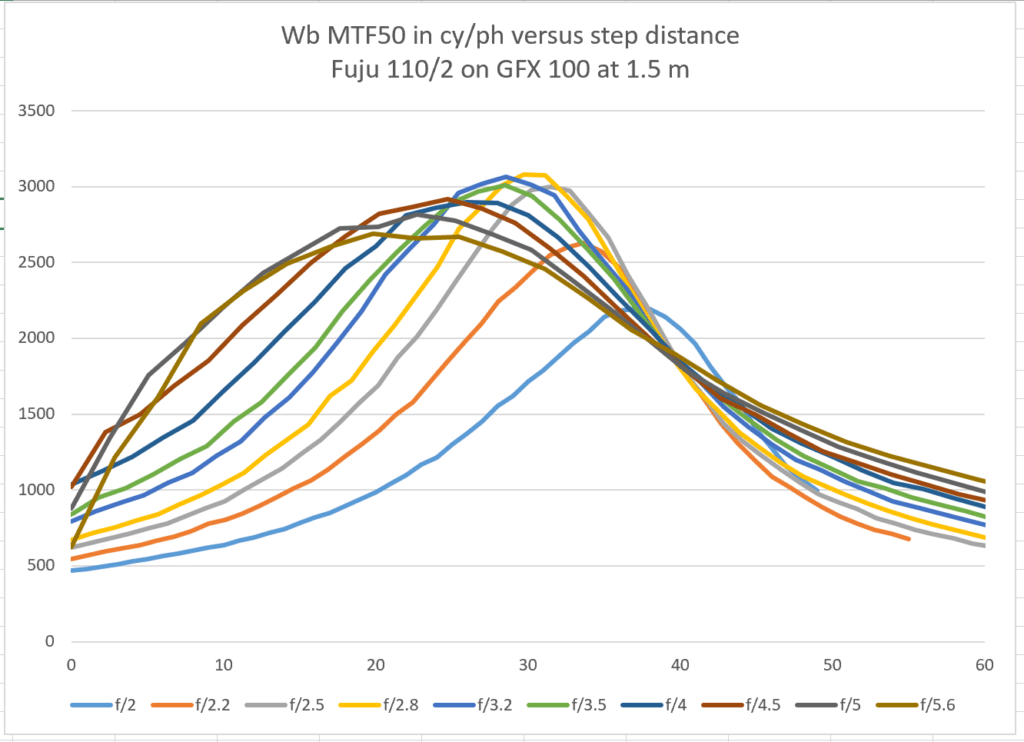 The vertical axis is the MTF50 of white-balanced-weighted raw MTFs, normalized to the picture height, which makes the units cycles per picture height. Techies, don’t worry; you’ll be able to see the individual raw channels down below. Because I’ve unwound the CoC correction, the horizontal axis is focus distance in arbitrary units.

Here are a few things you can learn from the above plot:

That last bullet is sort of a surprise, but if you remember the backstory on the GFX 50S microlenses, maybe not so much. When Fuji announced the GFX 50S, they make a big production out of the fact that the microlenses were smaller than usual, which reduced CFA crosstalk and increased sharpness, at the expense of moire. They have made no such assertions about the GFX 100, leading me to think that the microlenses are big enough to give essentially 100% fill factor. A consequence of that would be a loss in pixel-level sharpness. The numbers don’t quite add up, though; Brandon Dube’s analysis of the GFX 50S effective pixel size  gave about the equivalent of a 4.8 um 100% fill factor pixel. That’s bigger than the supposed 3.76 um fill factor pixel in the GFX 100.

This will need some more looking in to.

If you’re interested in longitudinal chromatic aberration (LoCA), and would like to see the underlying data for the plot above, the next set of graphs will help. The horizontal axis is now simply the step number, with no unwinding of the GFX 100’s correction for lens stop, so you can’t compare lines across graphs at the same horizontal axis points, but by looking at the location of the peaks in each raw channel, you can take the measure of the LoCA that the lens exhibits.

If you don’t want to bother with the graphs, I’ll bottom-line it: there isn’t very much LoCA at all. 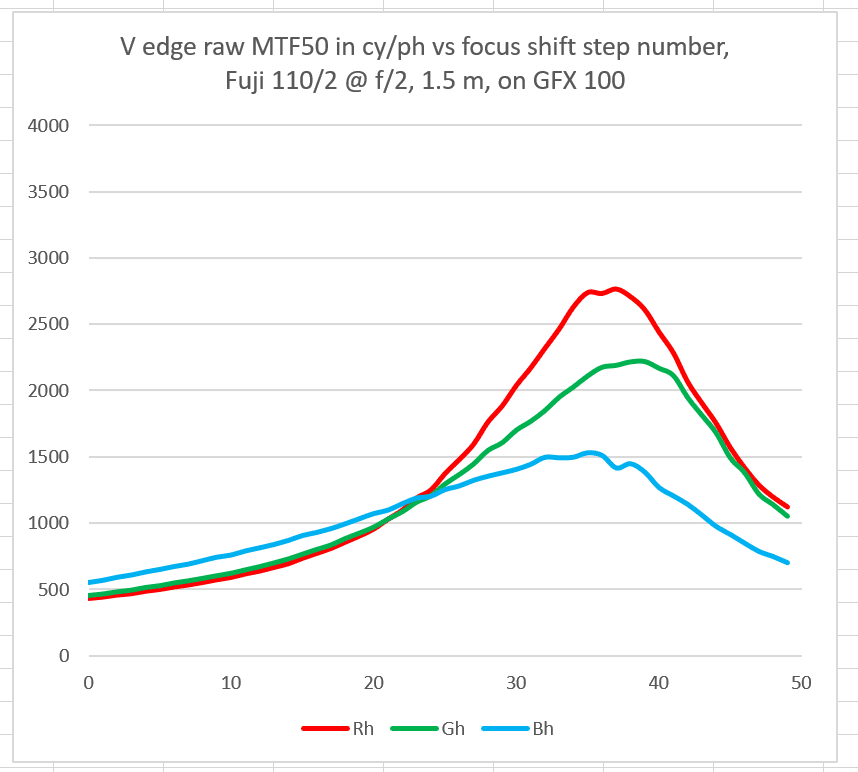 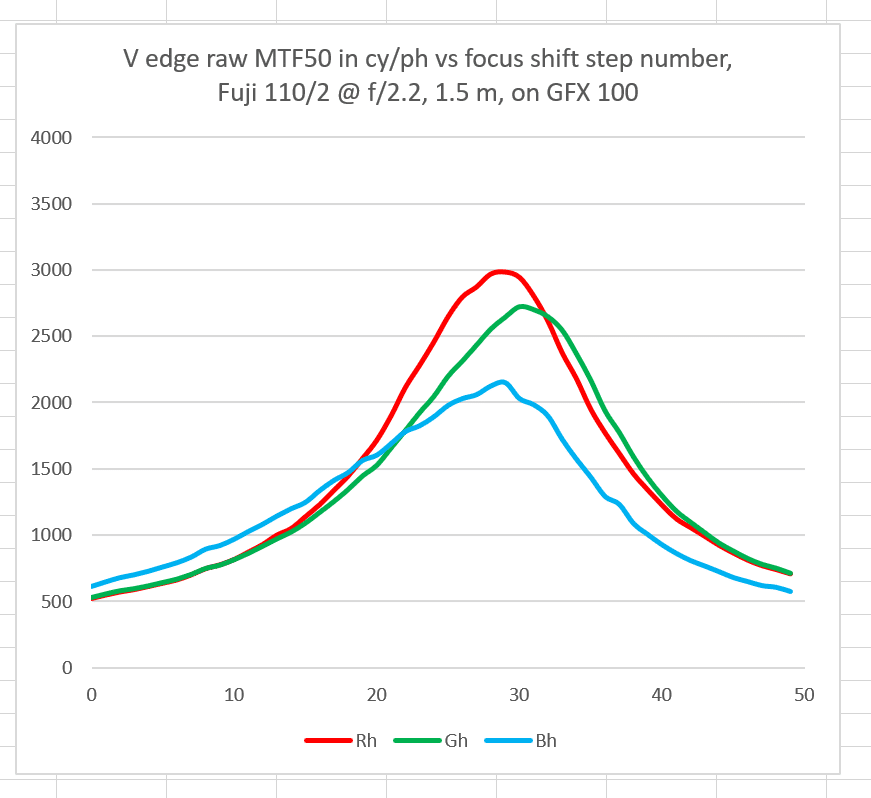 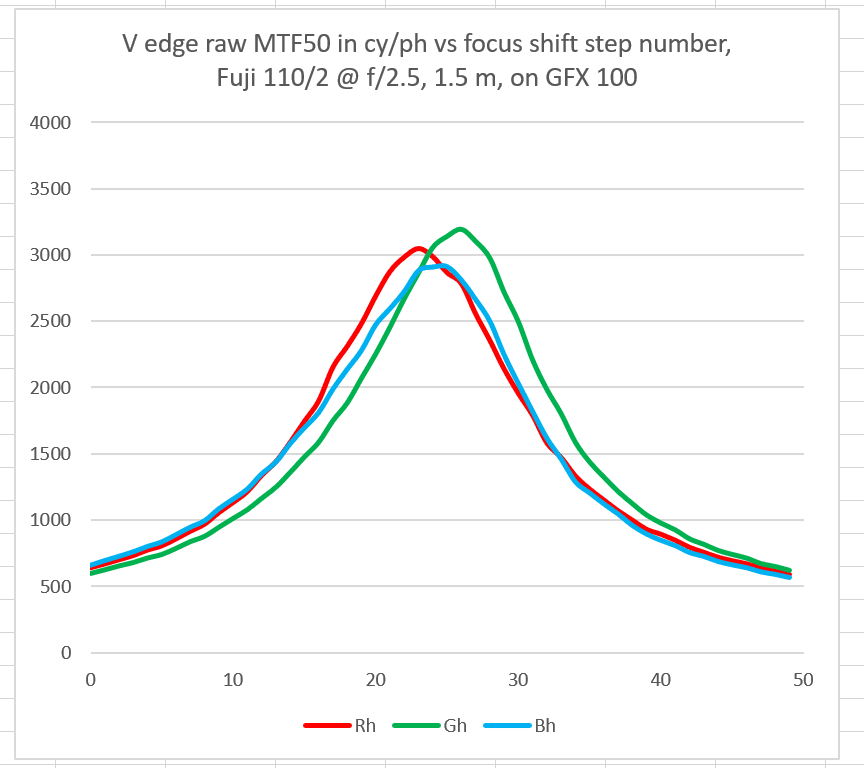 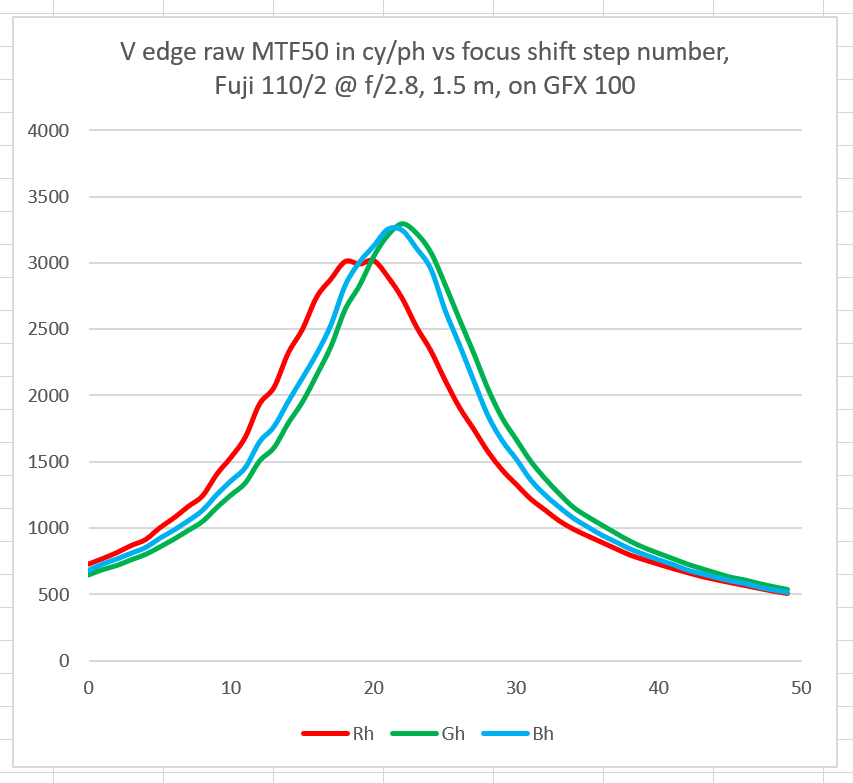 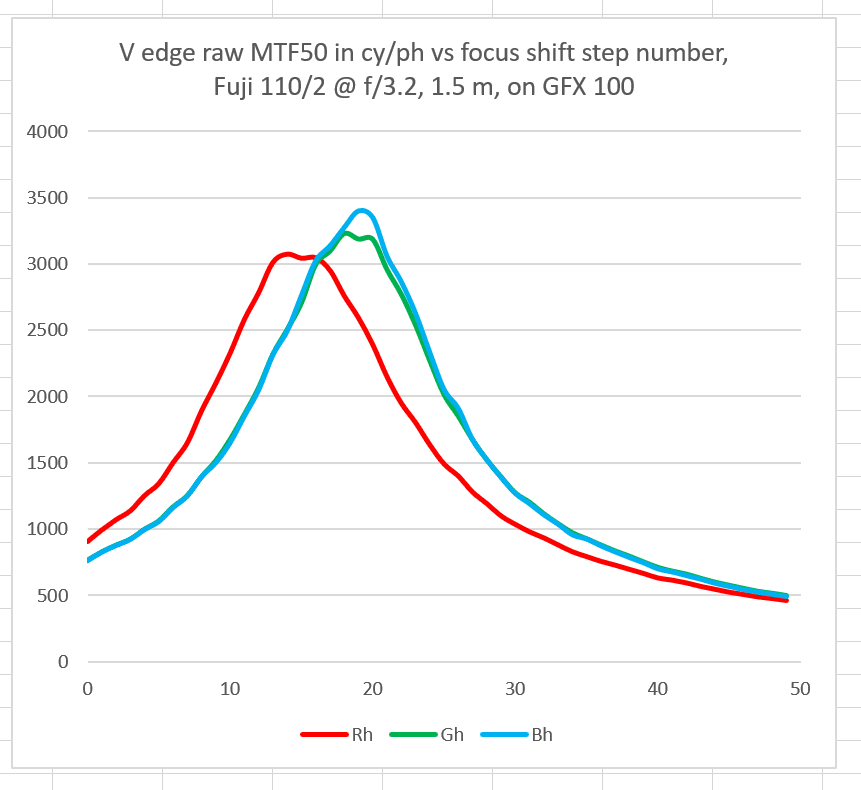 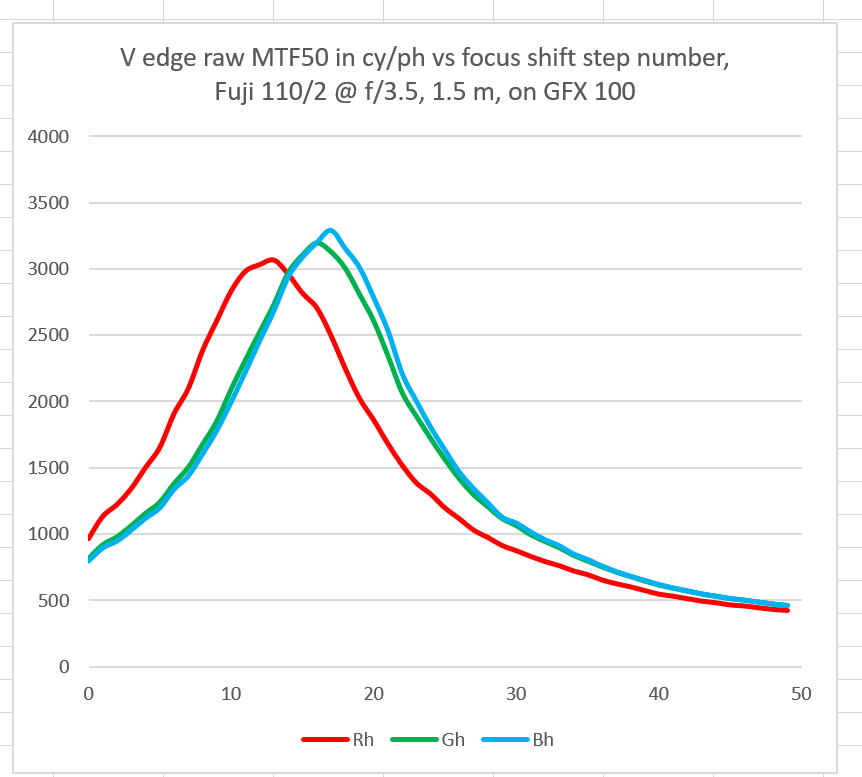 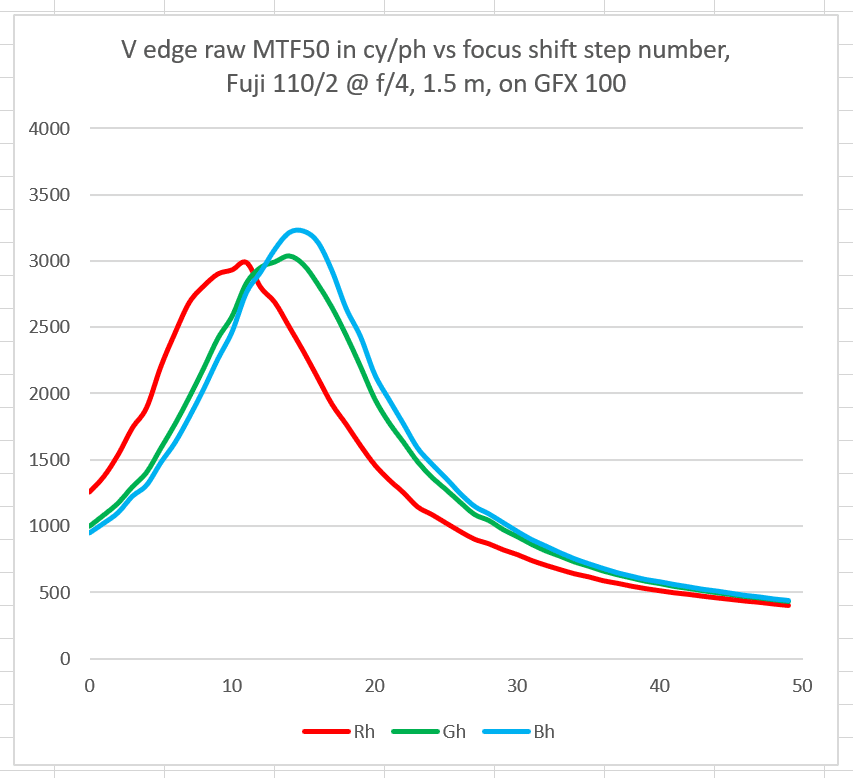 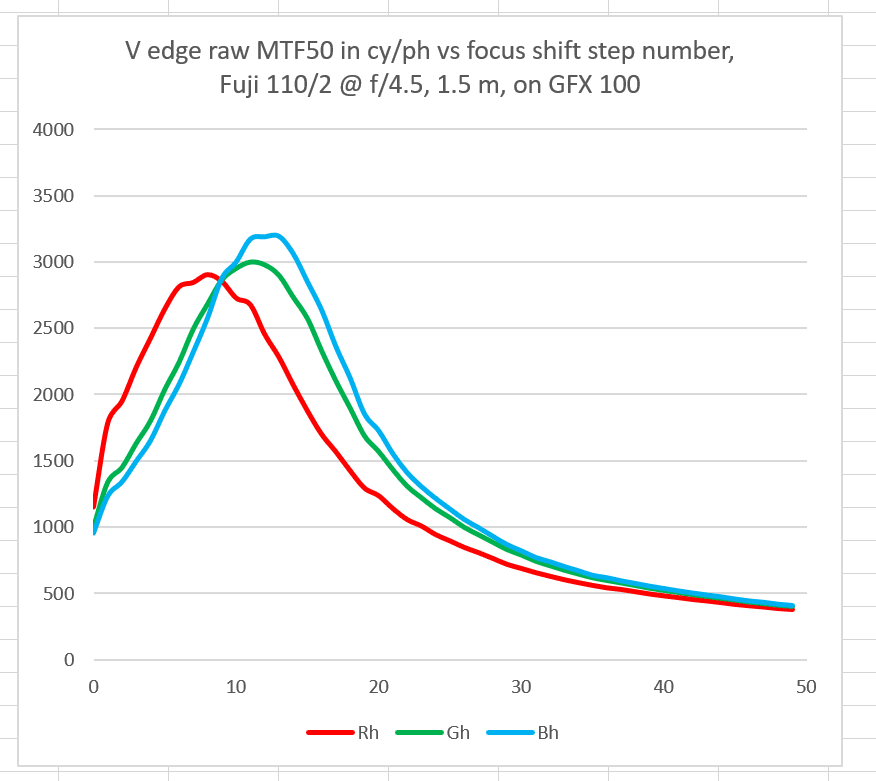 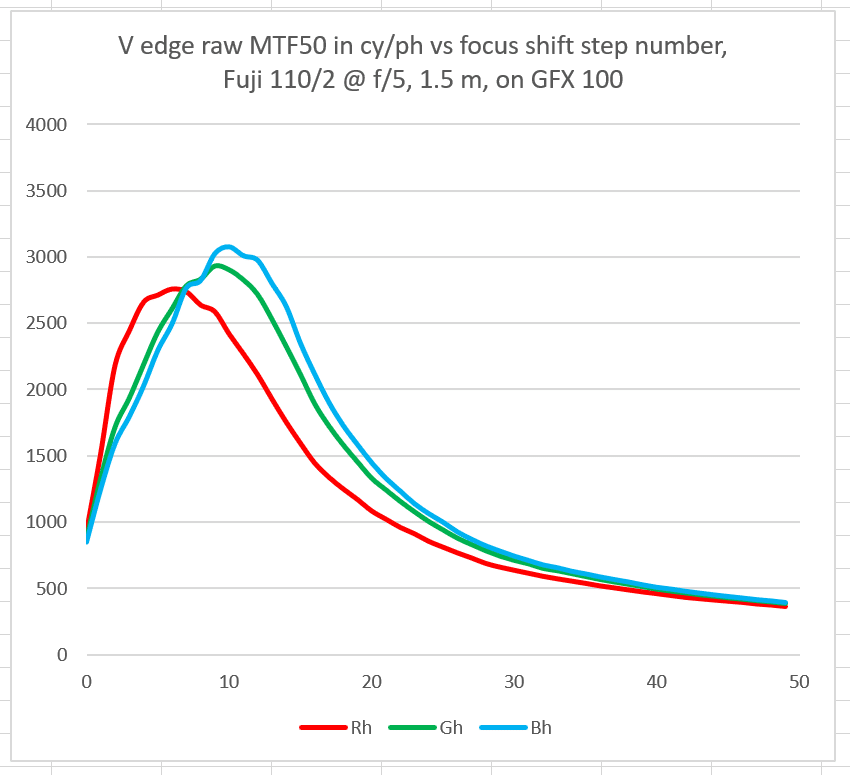 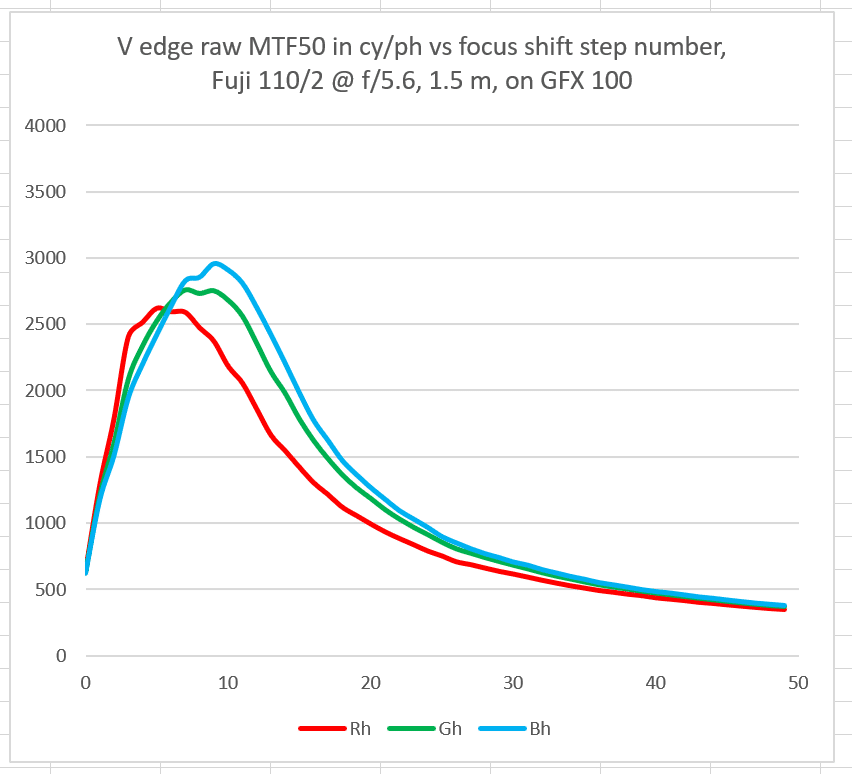