A few days ago I did some MTF testing using a sinusoidal Siemens star target, using Imatest software. The results were strange, particularly with respect to modulation transfer function (MTF) normalization. Someone who knows far more than I about these things suggested that I ignore the results. Too bad, since the Siemens star test allowed rapid collection of MTF data in many orientations. Ah, well. Good data obtained quickly is infinitely superior to bad data that comes easily.

So I went back to my old reliable slanted edge. In this case a low contrast one, shot from about 7 meters away. 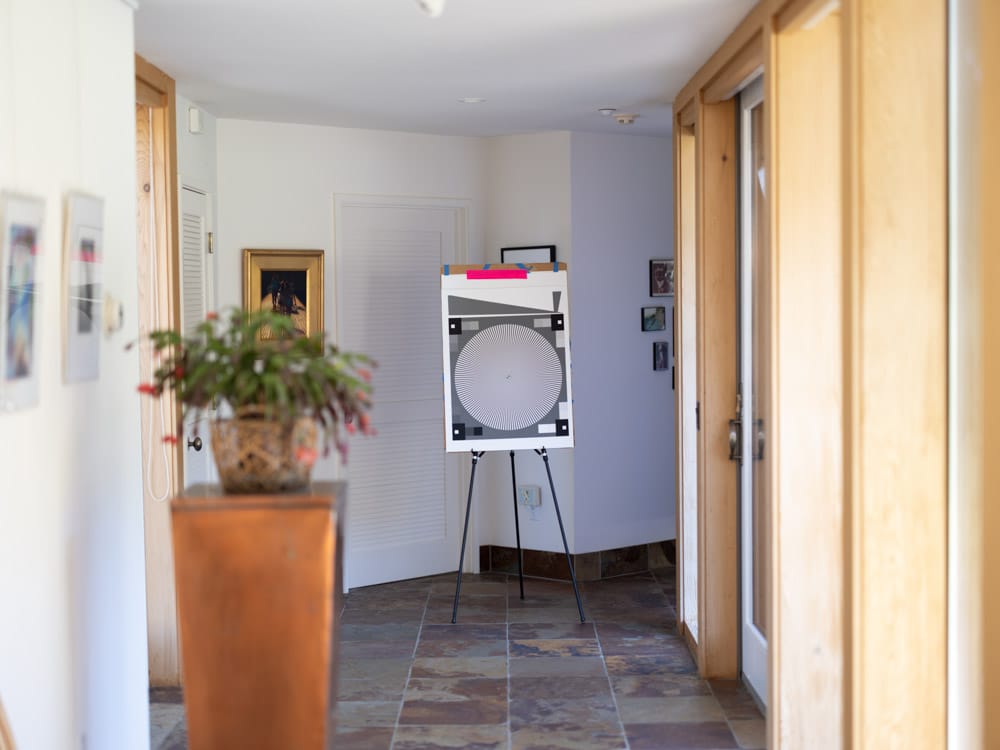 I shot the captures using the following protocol:

I analysed the images with Imatest SFR module.

The MTF and edge profile results (ignore the LW/PH numbers; Imatest calculated them from the dimensions of the crops it was fed): 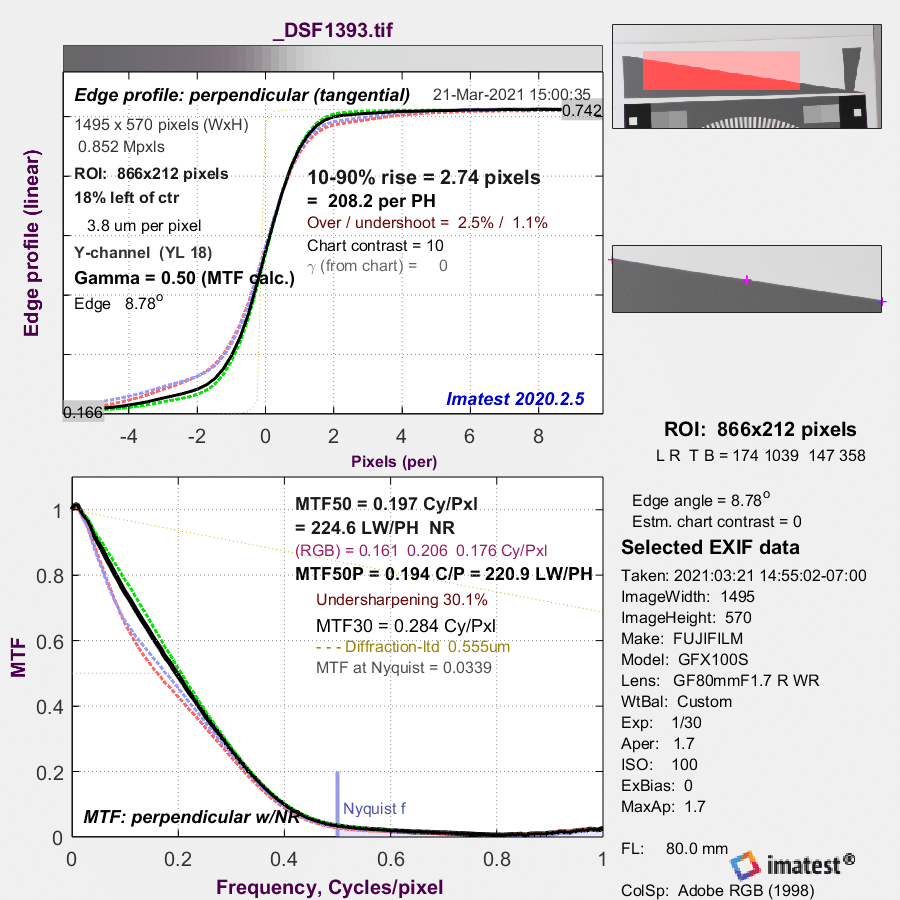 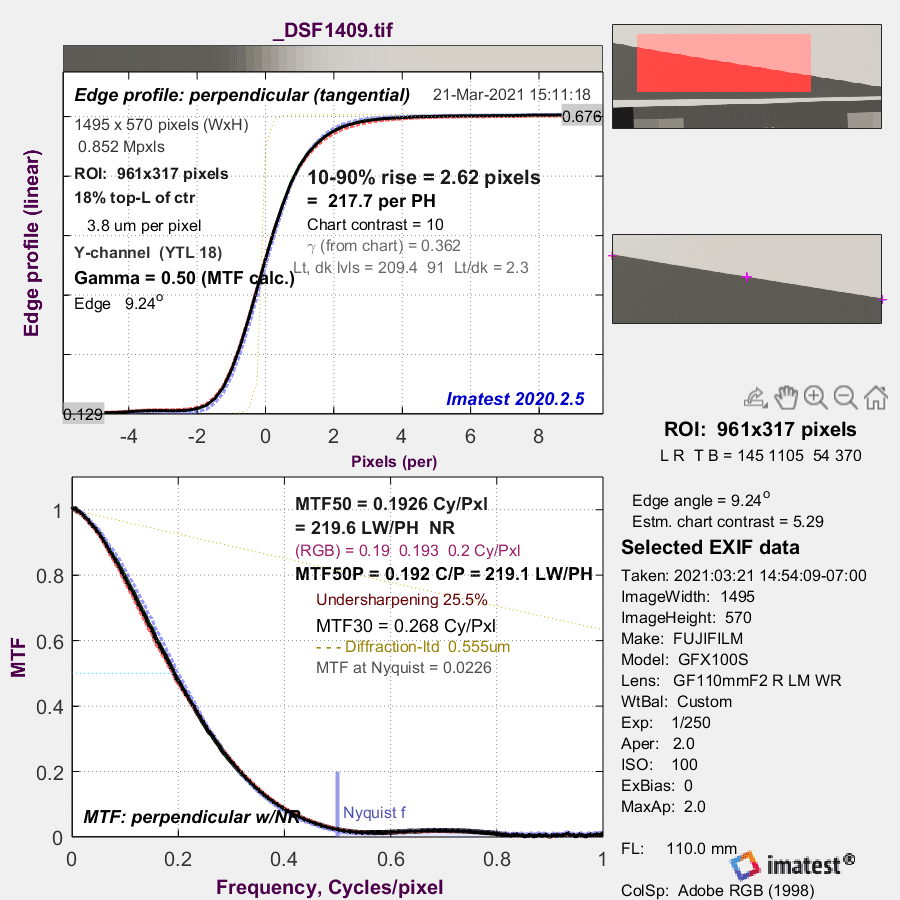 Luminance MTF50 is about the same for the two lenses. But look at the disparity in the color channels of the 80 mm lens! There is some serious chromatic aberration of some sort — probably longitudinal (LoCA), since we’re so near the lens axis. 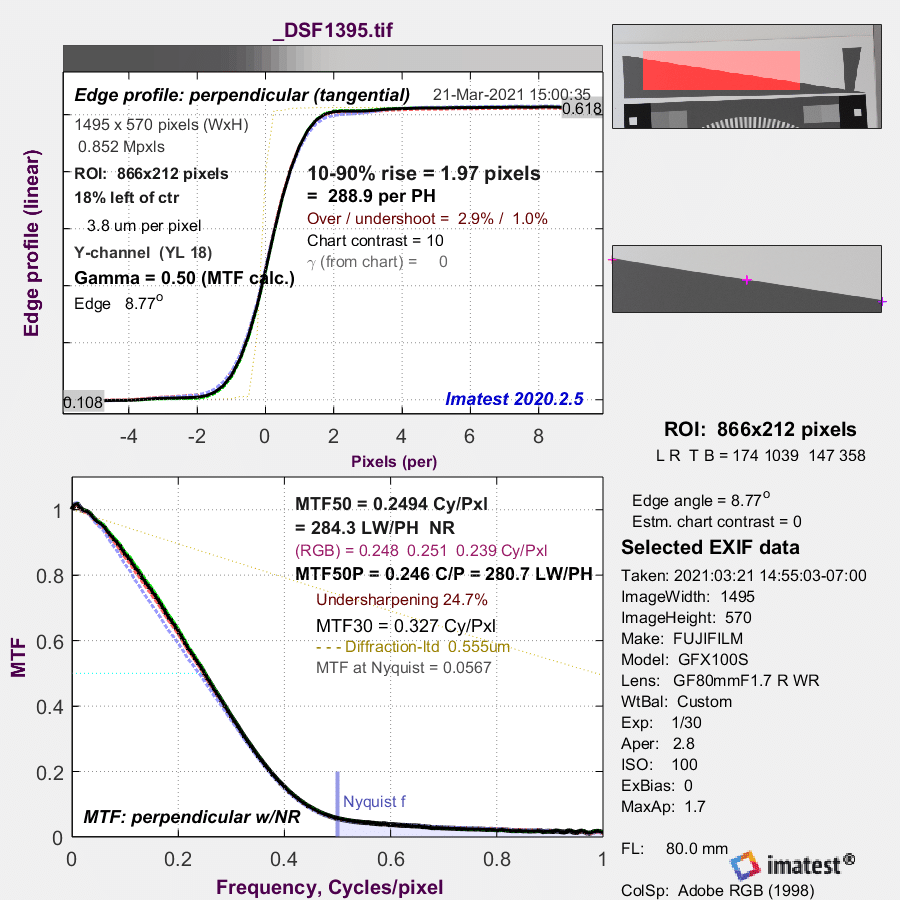 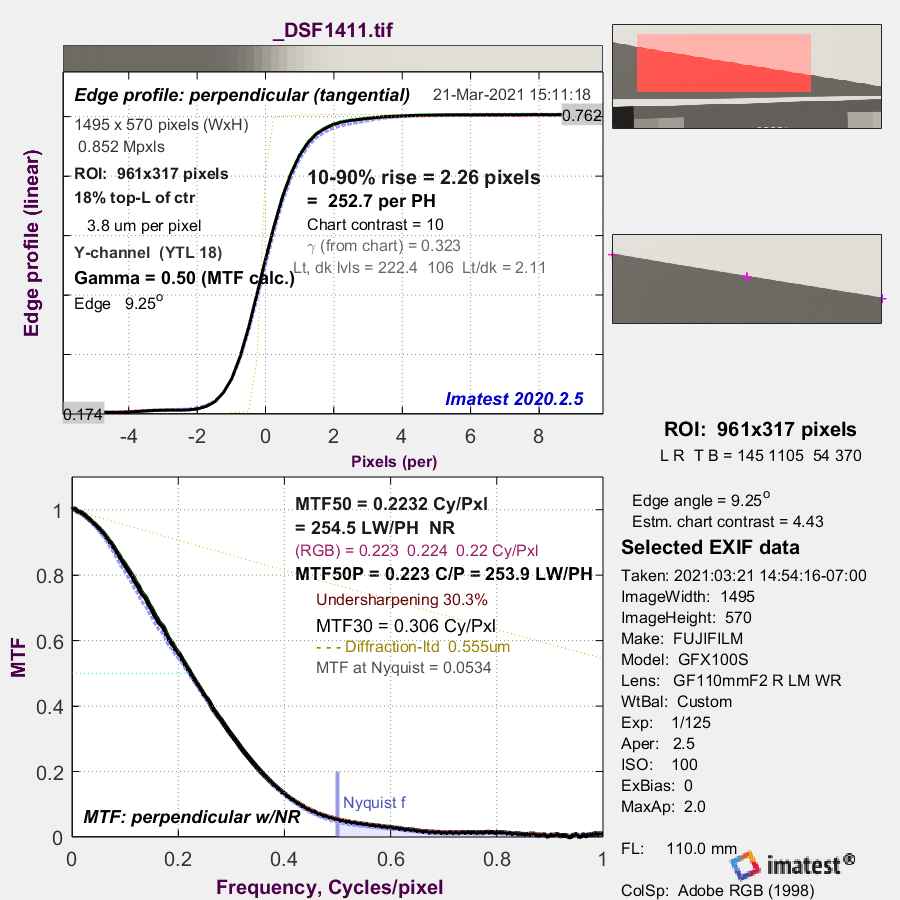 The 110 is a not quite as sharp, but that could be focusing accuracy and the fact that I mistakenly set the aperture for the 110 at f/2.5. The color channels of the 80 mm lens are falling into line, but are still not as congruent as the 110. 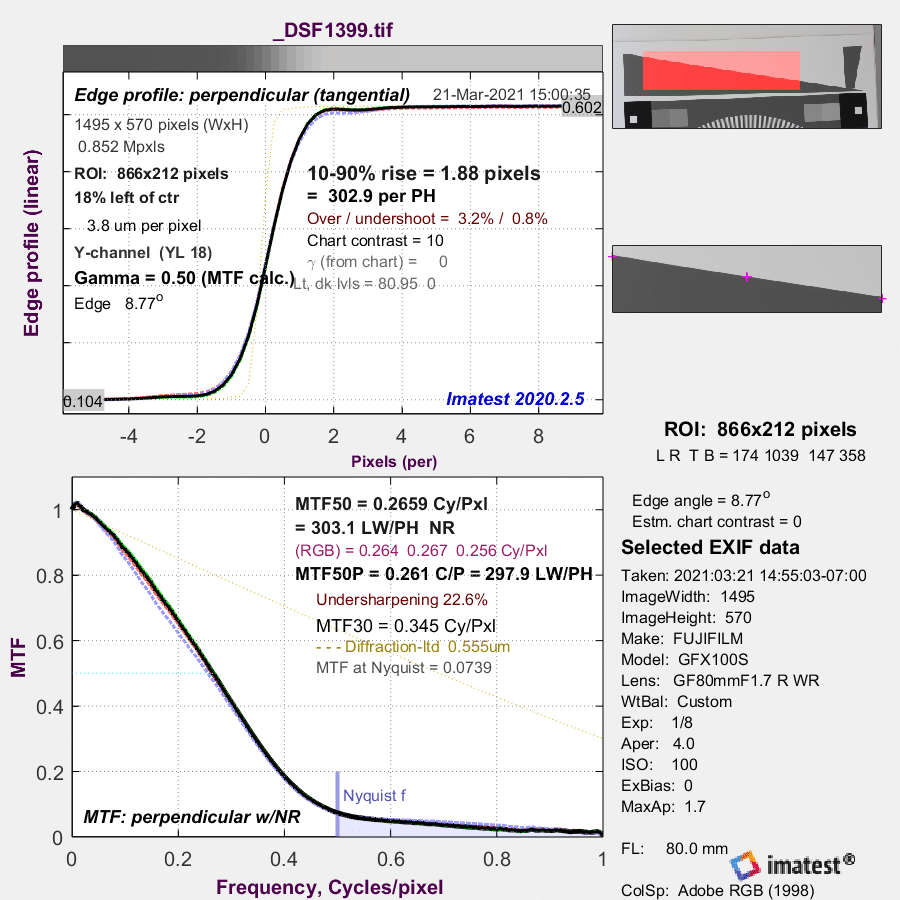 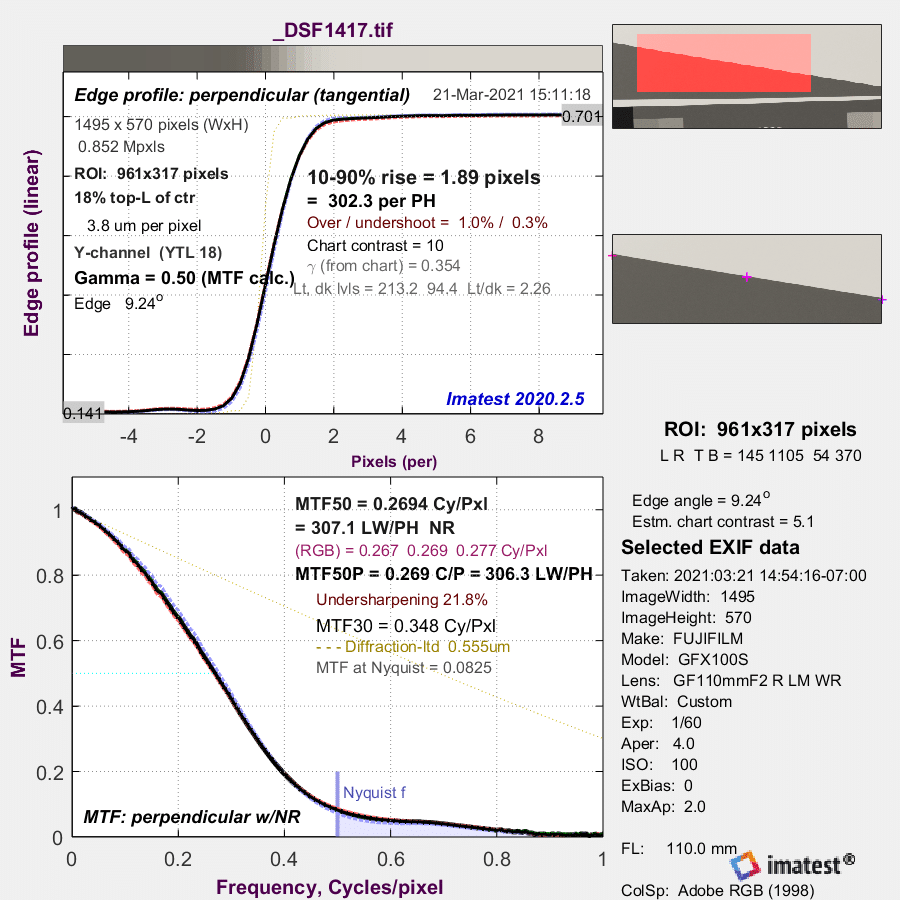 The 110 is marginally sharper. I wouldn’t put much weight on that. The difference is very small. 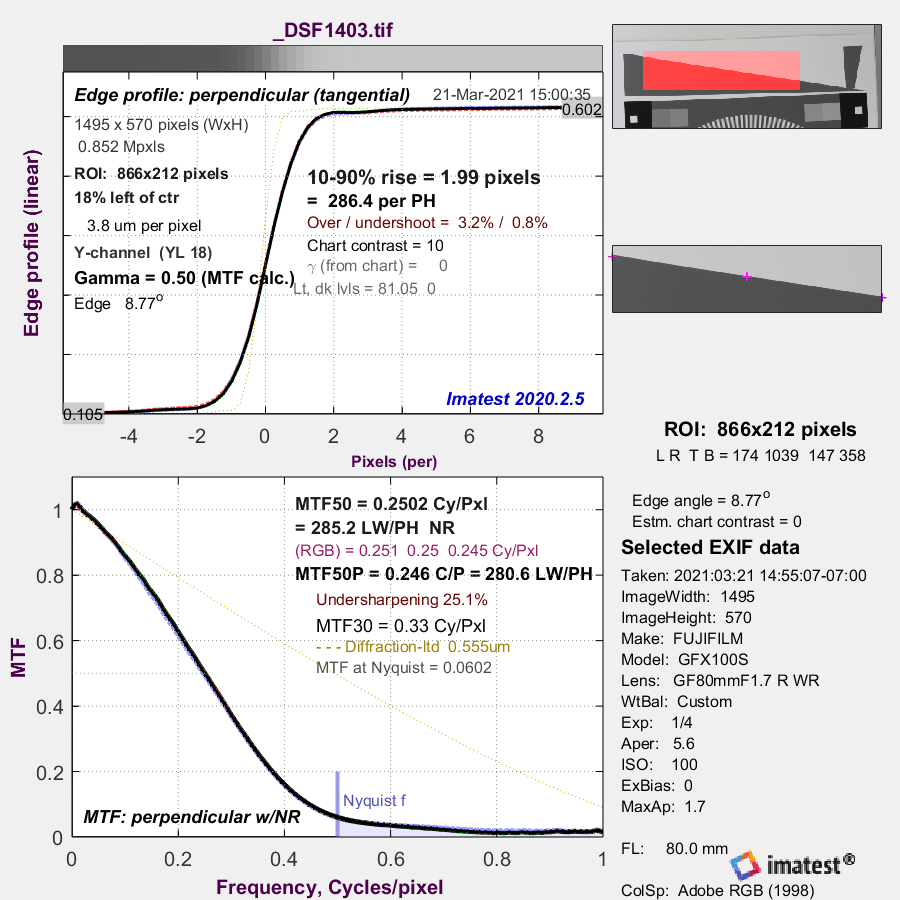 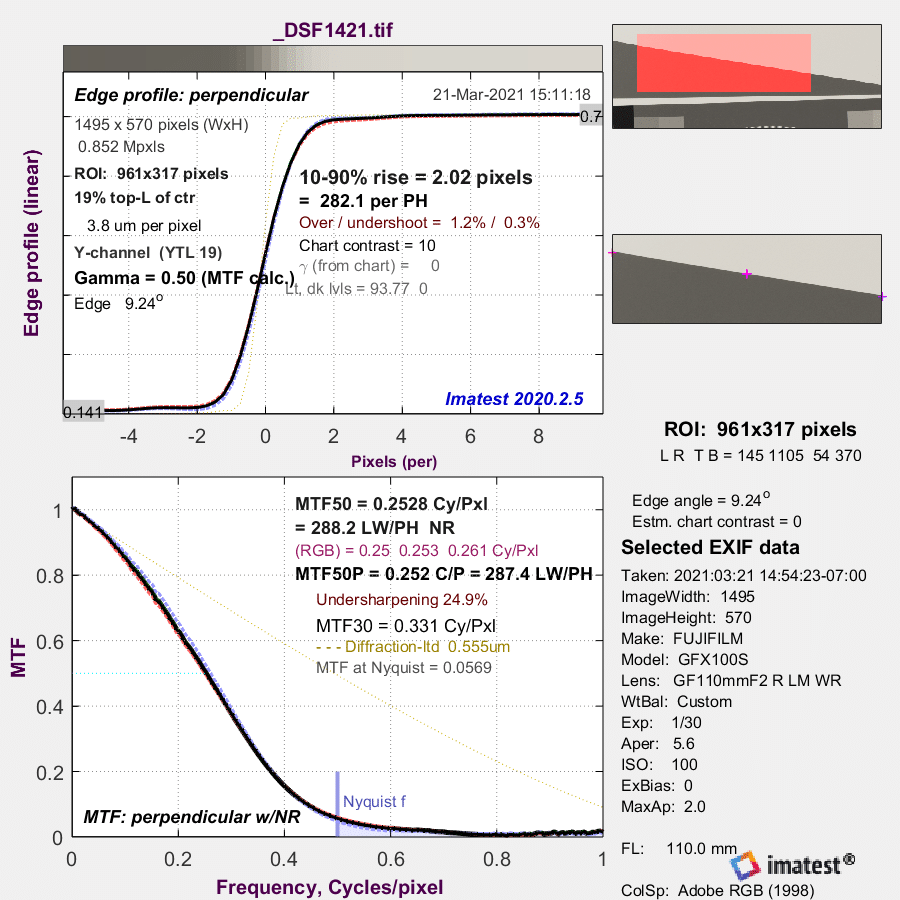 Diffraction is affecting both lenses, and the 110 is retaining its paper-thin lead. 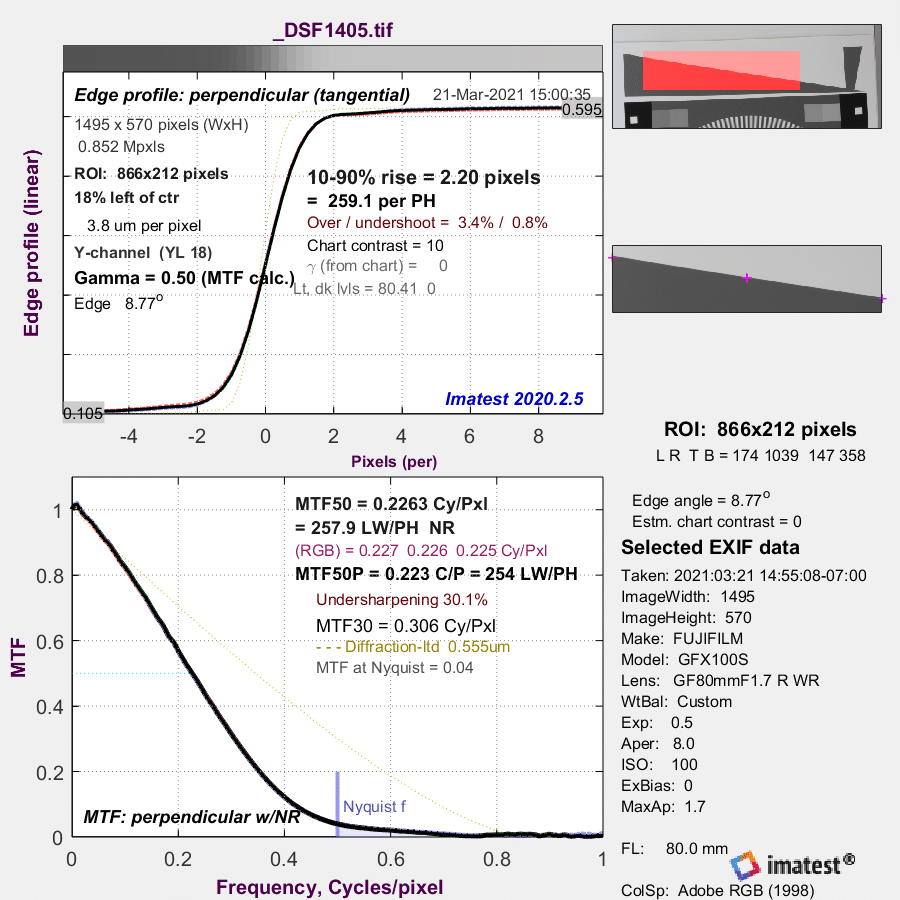 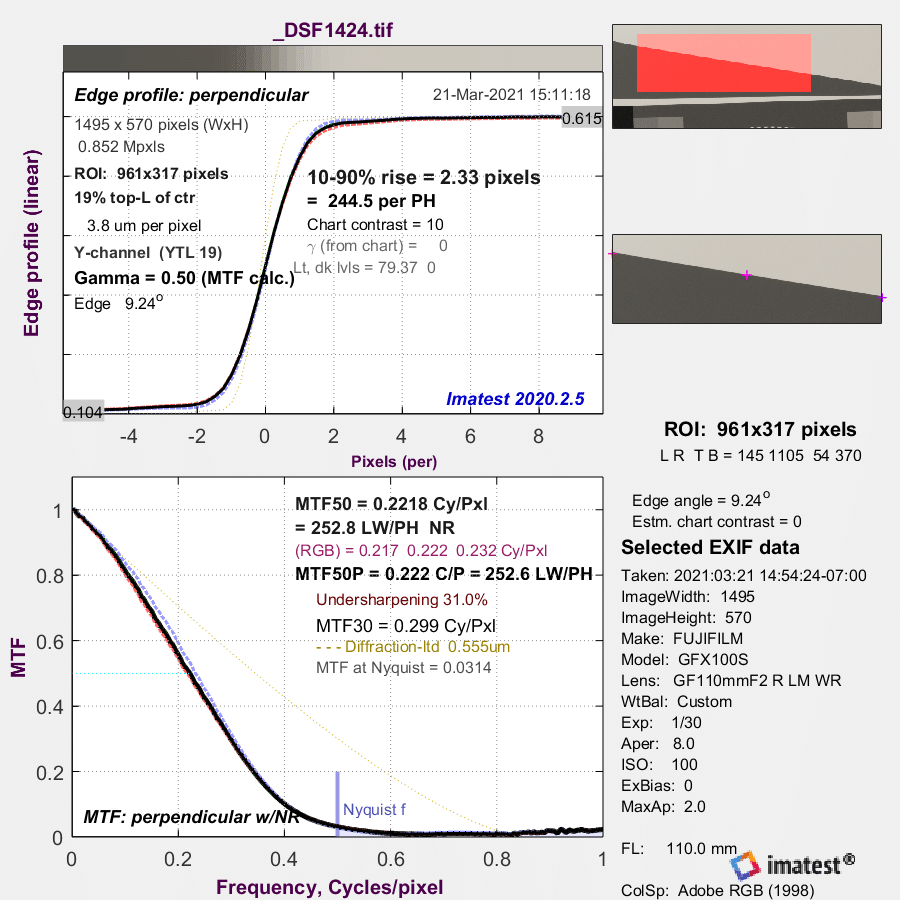 The 80 mm lens is very close to the redoubtable 110 in on-axis sharpness.

Note: setup, including target design, paper, how printed, lighting, and the phase of the moon affect slanted edge MTF testing. You should only compare numbers using the same testing protocol.

Warning: nerds only beyond this point.

A reader detected curvature in the edge in the captures, and speculated that the curvature could invalidate the results. I took the same captures, and reran the analysis with the width of the region of interest reduced from 931 pixels to 197 pixels. The numbers went up a bit, but the conclusions don’t change. 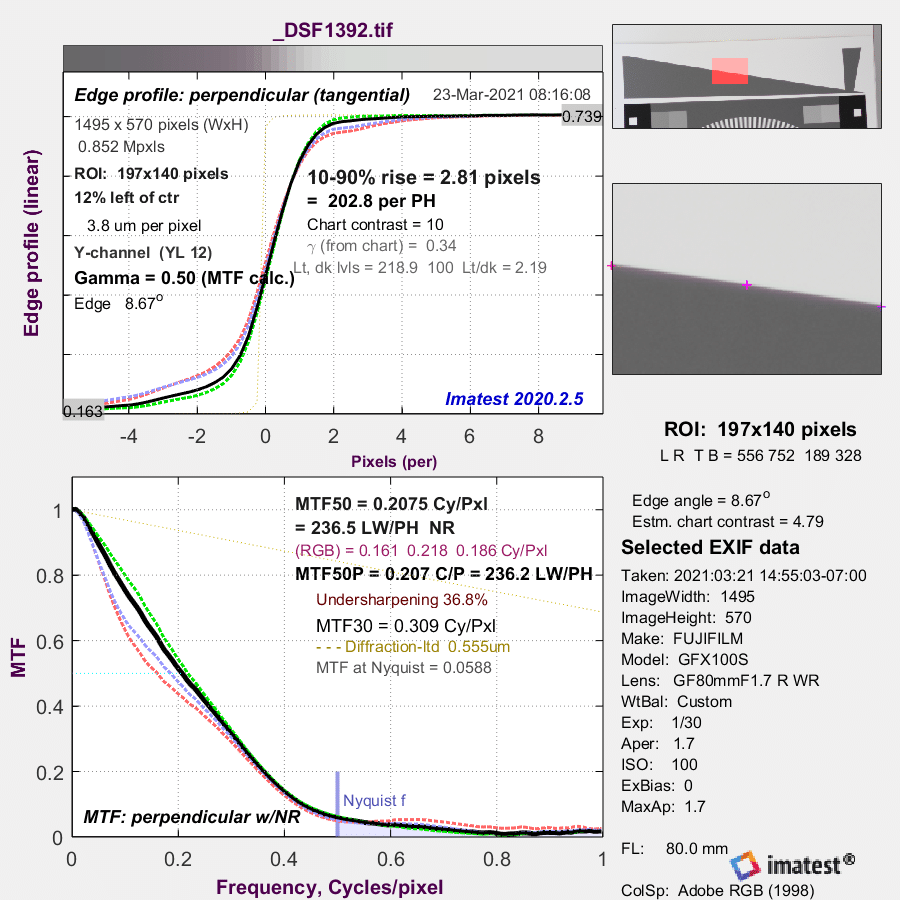 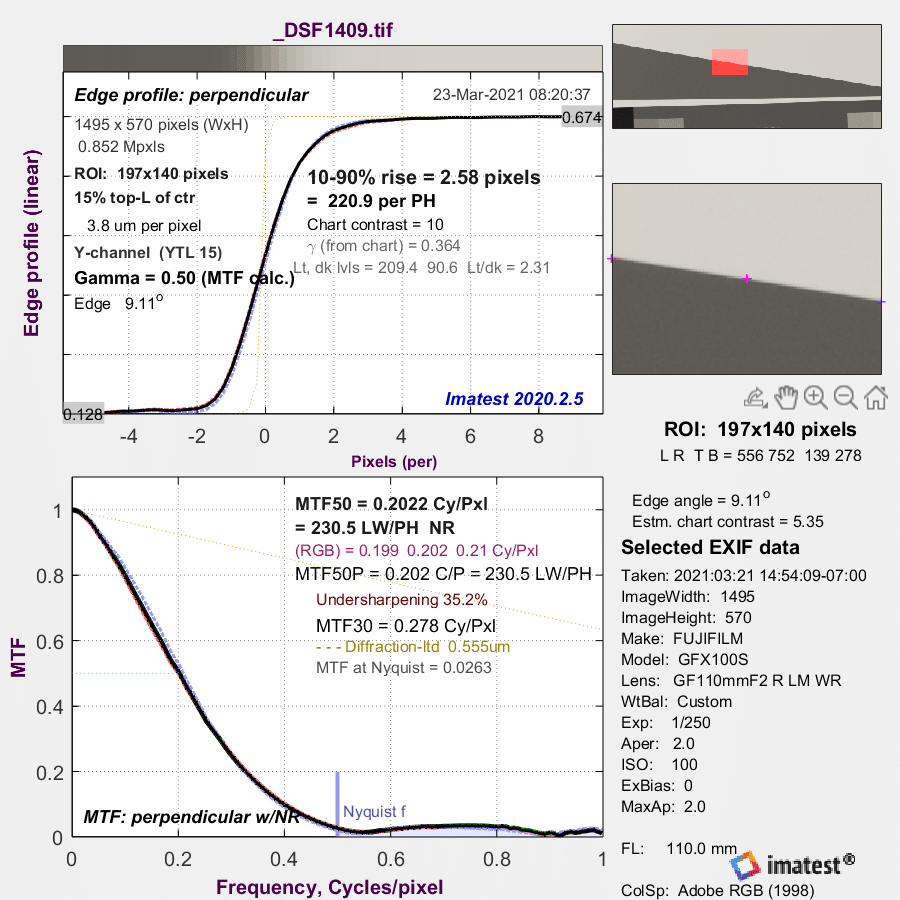 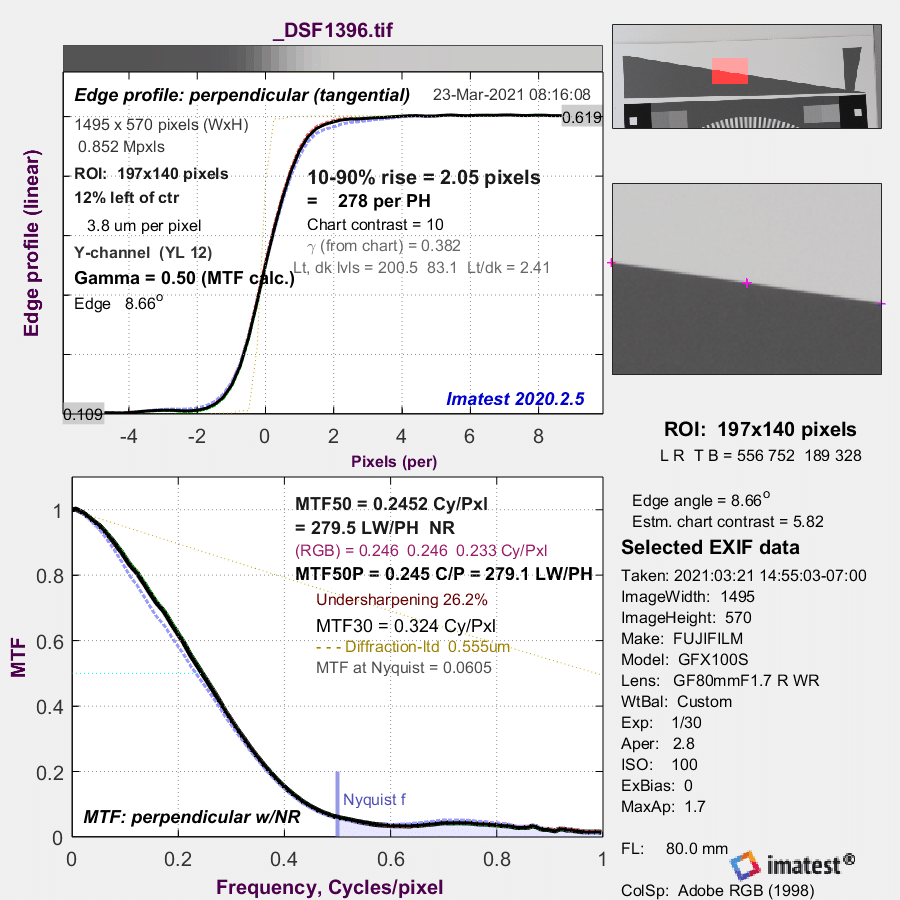 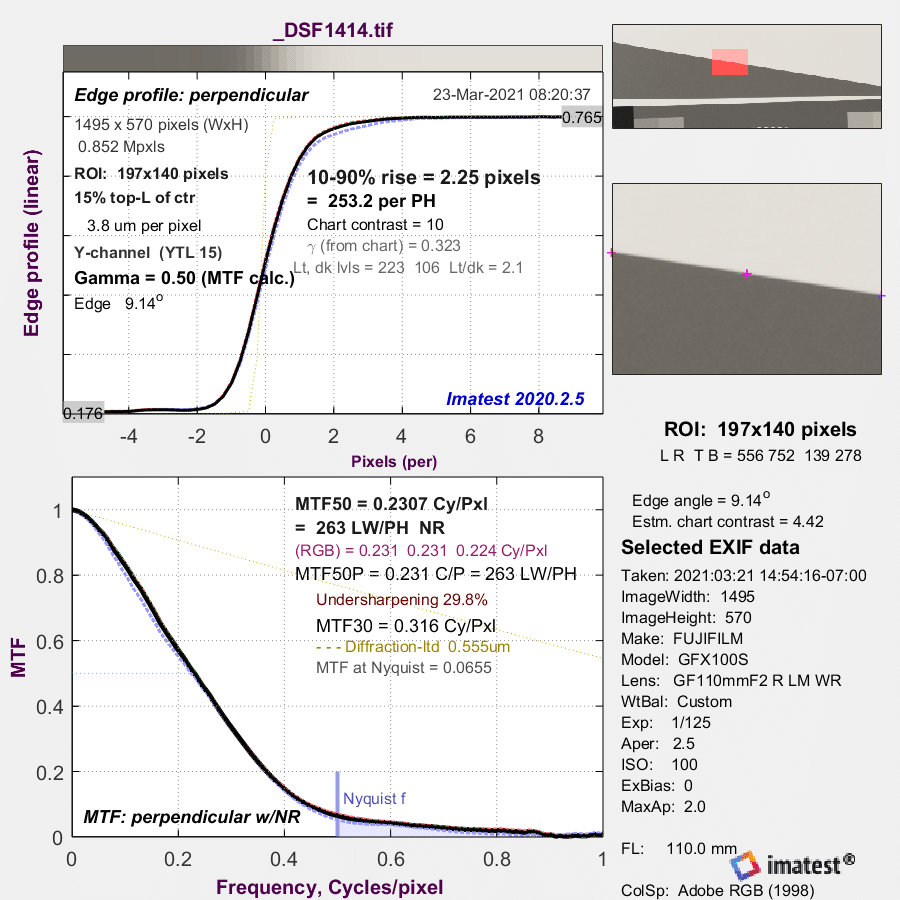 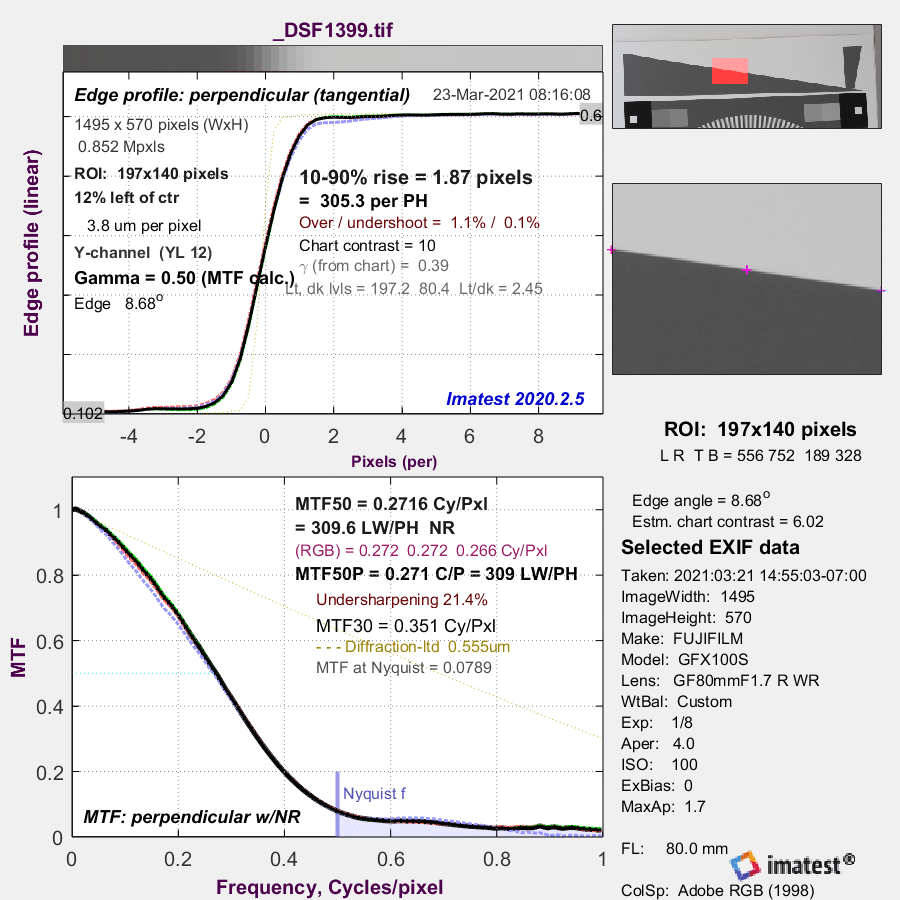 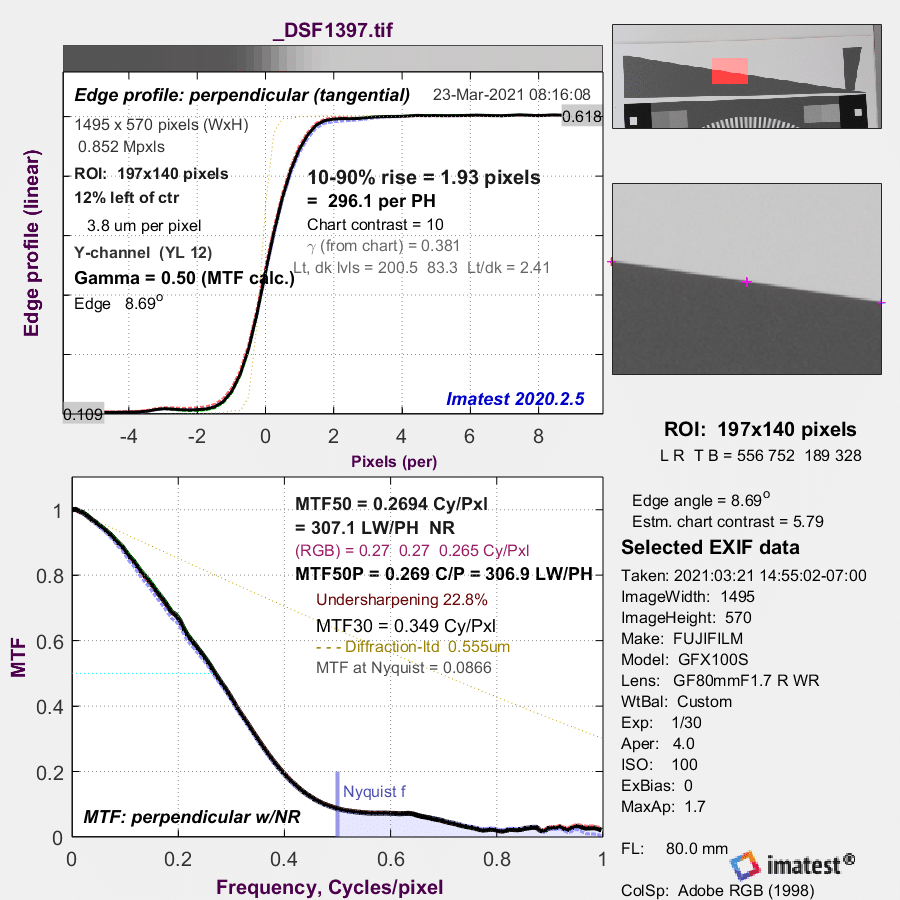 The captures used may have changed since the protocol required picking the best Imatest results for each test condition.