This is a part of series of posts on the Fujifilm GFX 50S   You can find all the posts about that camera in the Category List on the right sidebar, below the Articles widget. There’s a drop-down menu there that you can use to get to all the posts in this series; just look for “GFX 50S”.

I’ve recently finished a series of posts about the optimal exposure and ISO setting strategy for the Nikon D850 and the Sony a7RIII. The first one of those is here. In response to a query, I’m now going to do the same thing for the GFX.

Unlike the D850 and the a7RIII, the GFX uses a sensor that does not use conversion gain changing technology licensed from Aptina (Since acquired by ON Semiconductor). That technology is called DR-Pix, and you can read about it here. Most modern Sony large sensors have DR-Pix, and its absence in the 33×44 mm sensor in the GFX is an indication of the sensor’s age.

Here’s the Engineering Dynamic Range (EDR) of the GFX versus ISO setting. 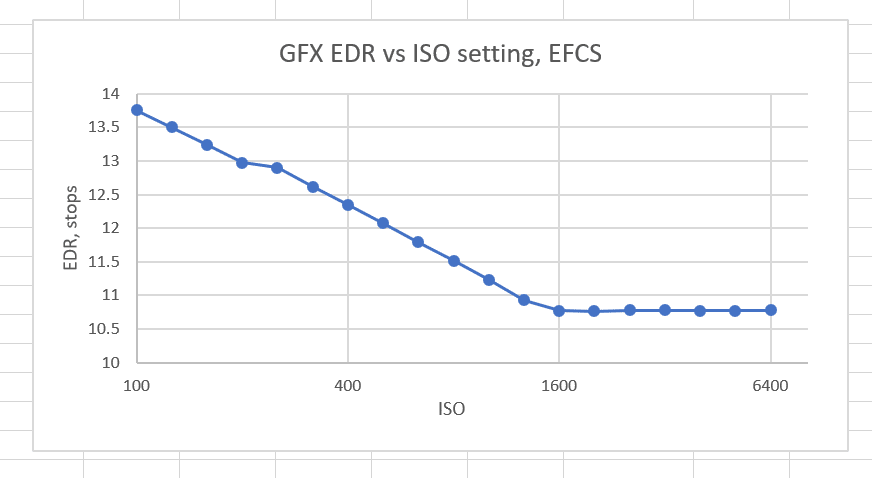 The EDR starts out behaving as you’d expect, dropping as the ISO goes up. But at ISO 1600, something peculiar happens. The EDR stops changing. That’s because, after ISO 1600, the camera ceases to apply progressively more gain to the signals that make up the raw values. Instead, it writes metadata that instructs the raw converter to apply the appropriate gain.

Here’s what the EDR would look like if the raw converter did what most cameras that use digital gain do before they write the data: 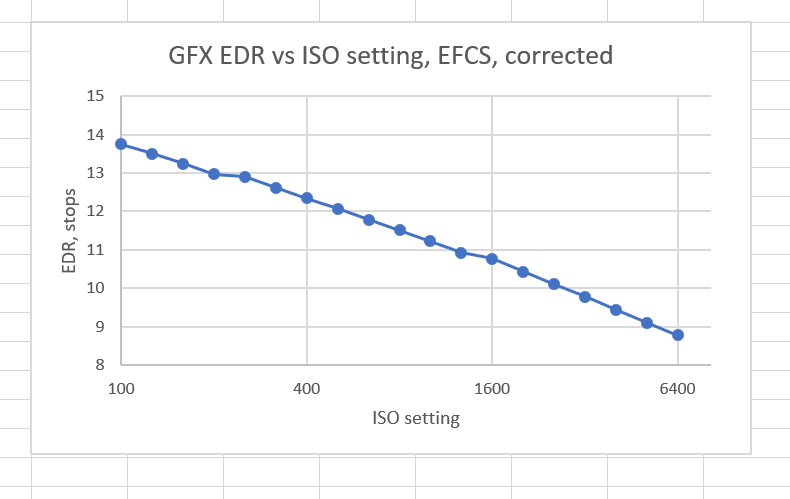 For completeness, here is the input-referred read noise, in electrons: 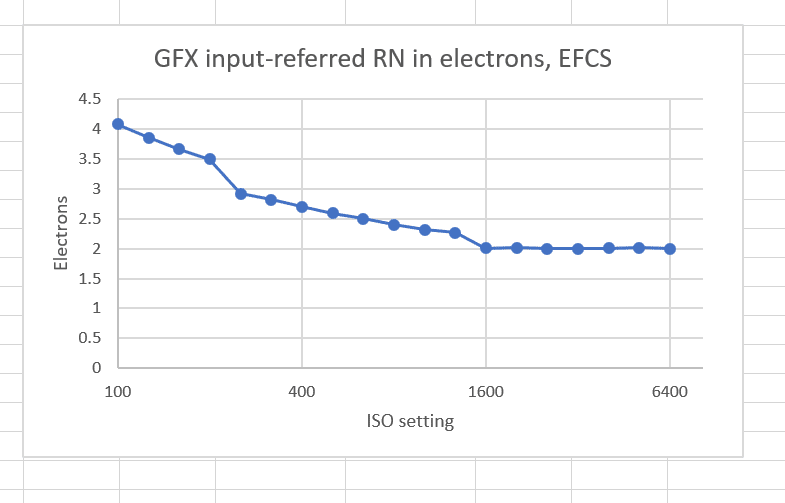 EDR is not of much use to photographers, at least directly. A more significant metric is the signal-to-noise ratio (SNR) in the shadows. So let’s take a look at that: 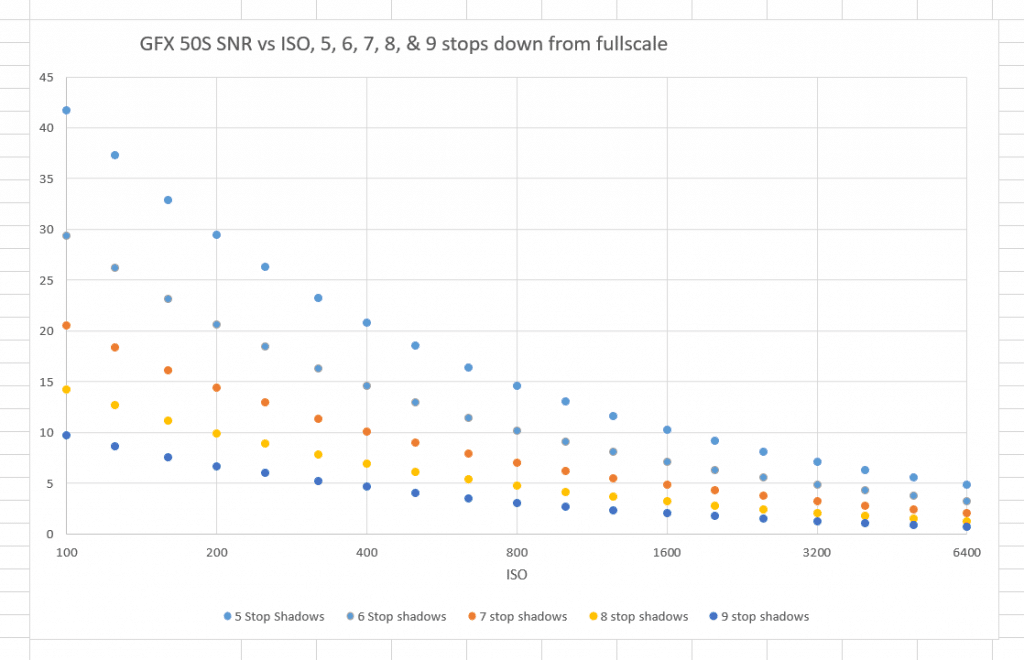 Photographers usually like to see the SNR measures in stops: 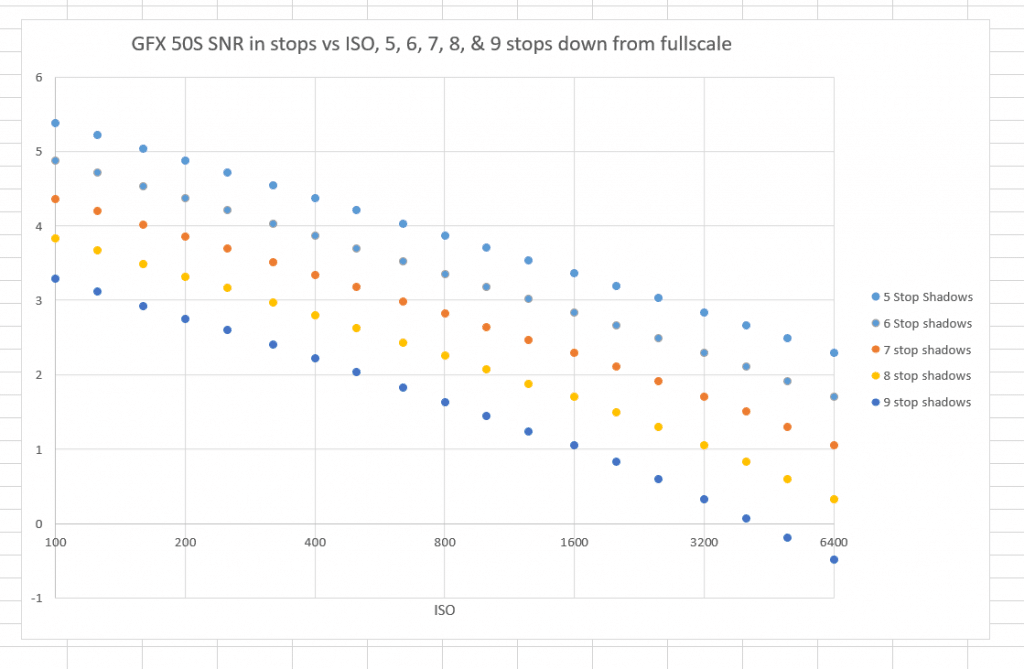 How close to ISO-less is the GFX? Let’s look at the improvement in SNR that is created by turning up the ISO as opposed to leaving it at 100. 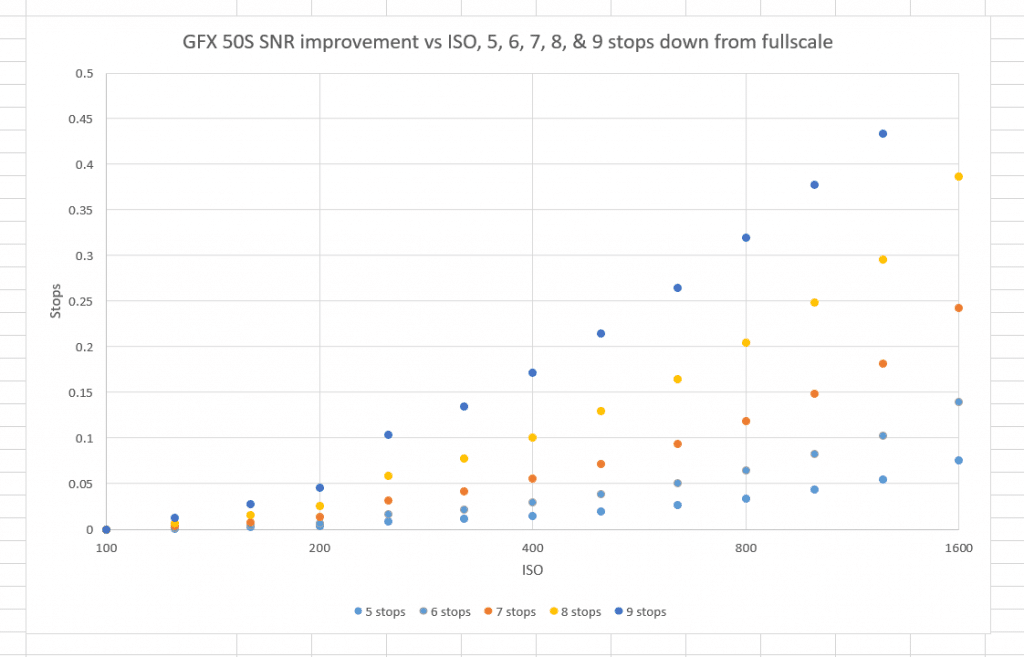 The “expose at base ISO and push in post” approach has the least effect on the moderately dark shadows of 5 and 6 stops down from full scale. For them, the less than 1/10 stop penalty is minimal. But you probably wouldn’t want to do that if you were really concerned about the 8 and 9 stop shadows.

Let’s split the difference. What if we stop advancing the ISO after 640? 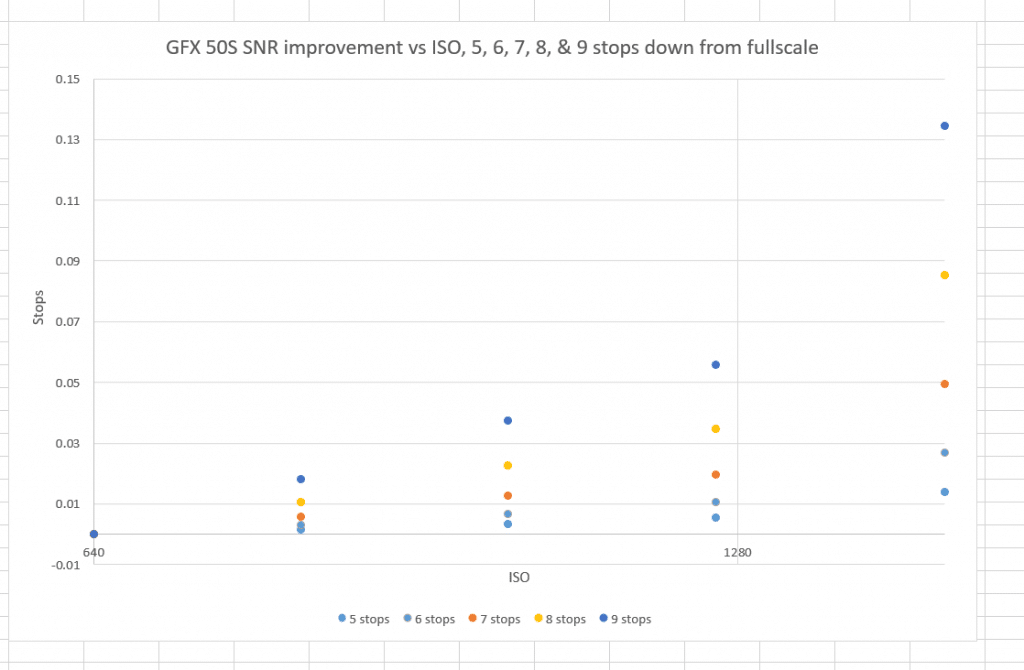 Now even the 9 stop shadows aren’t hurt much over turning up the ISO, and we get a lot of increased headroom if we leave it at 640.

So, assuming that you are setting your f-stops, shutter speeds, and ISO settings manually, what is the best strategy?

If you can, expose to the right (ETTR) at base ISO. This is a no-brainer and is true for just about any digital camera. What keeps it from working all the time?

So now what, assuming that you’re shooting RAW?

The first thing to do is figure out the ISO that would place the significant highlights on the right side of the histogram; let’s call that the metered ISO. ) I want to reserve ETTR for base ISO exposures, and we’ve already decided that this scene won’t let us do ETTR at base ISO.)

That sounds complicated, but once you’ve gone through the steps a few times, you can figure out the camera settings you need instantly.

If you want to use aperture preferred metering, the cardinal rule remains the same: If you can, expose to the right (ETTR) at base ISO. With the GFX, you can use the live view histogram, or take shot and look at the histogram as you review the capture. Set your exposure compensation (EC) so that your meter will give you that exposure. You might want to bias the exposure slightly towards underexposure if the light is changing since it’s easier to deal with a bit more noise in the shadows than blown highlights.

But let’s ask what you should so if the ETTR exposure is too long for you or requires a wider lens opening than you want to use. If the lens opening is the most important thing to you:

If the shutter speed is what’s key for you, use the above procedure, but set the camera to S mode and swap aperture and shutter speed in the protocol.