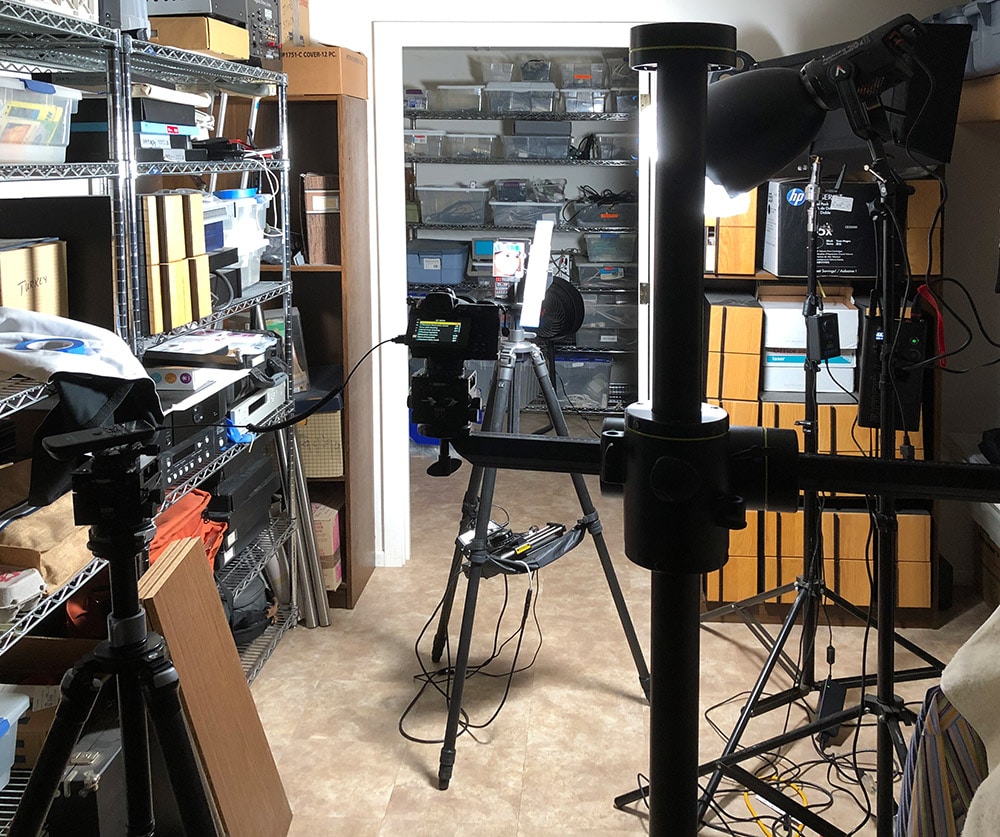 The camera is mounted to the Foba stand with an Arca Swiss C1. The ramp has a checkerboard on it and is used to figure out where the camera focuses. To the left of the ramp is the face detection target. Lighting is from an Aputure 120D II with a 12-inch parabolic beauty dish and a “shower-cap” diffuser which is visible in the upper right. There is an intervalometer attached to the camera and resting on top of a tripod to the left. Target distance is one meter.

The test procedure is as follows:

I analyzed the focusing errors, converting them to the equivalent circles of confusion created by the measured degree of misfocus. Circles of confusion diameters cannot ever be negative, but I used the convention that I’ve used previously: positive diameters are due to back-focusing, and negative ones are due to front-focusing. I computed the mean and standard deviation of the each of sets of 16.

Here’s what we get with the Z7: 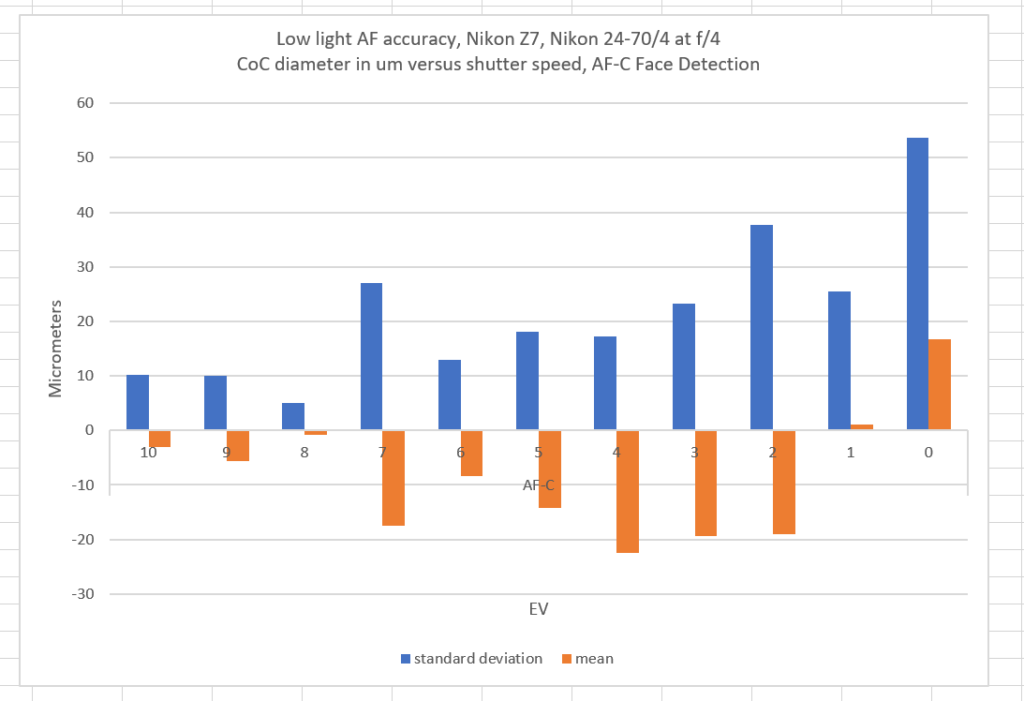 The horizontal axis is the exposure converted to EV. The pitch of the sensor in the Z7 is a bit over 4 micrometers (um), and circles of confusion (CoCs) with a diameter under that imply excellent autofocus performance in the situations where face detection is likely to be used. Even twice that is quite good by most standards. The Z7 has a bias towards front-focusing as the light levels decrease,  with the trend reversing when things get really dark. Except for the outliers at EV = 8, EV = 7, and the one at EV = 1, the scatter, as shown by the standard deviation, increases as the light goes down. At EV 0, the camera was hunting a lot. 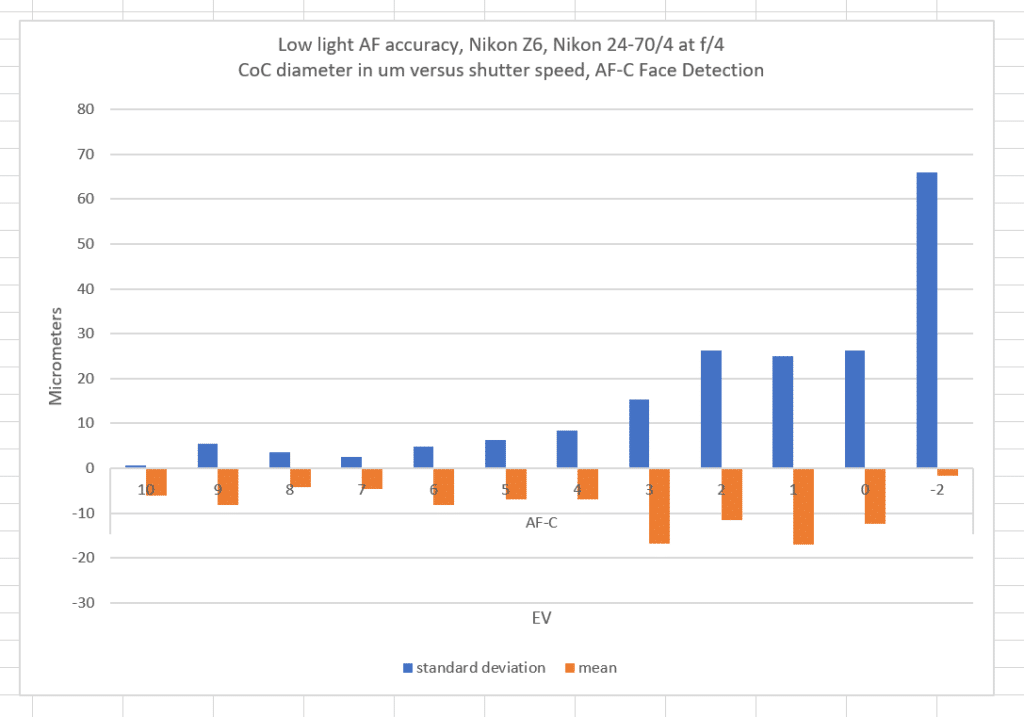 The Z6 didn’t hunt at all at EV 0, which was as low as I could go with the LED light, so I turned it off completely and opened a door to an adjoining room so that a little light spilled in to get the EV = -2 reading. Even then, the camera wasn’t hunting a lot, but the scatter got pretty bad. 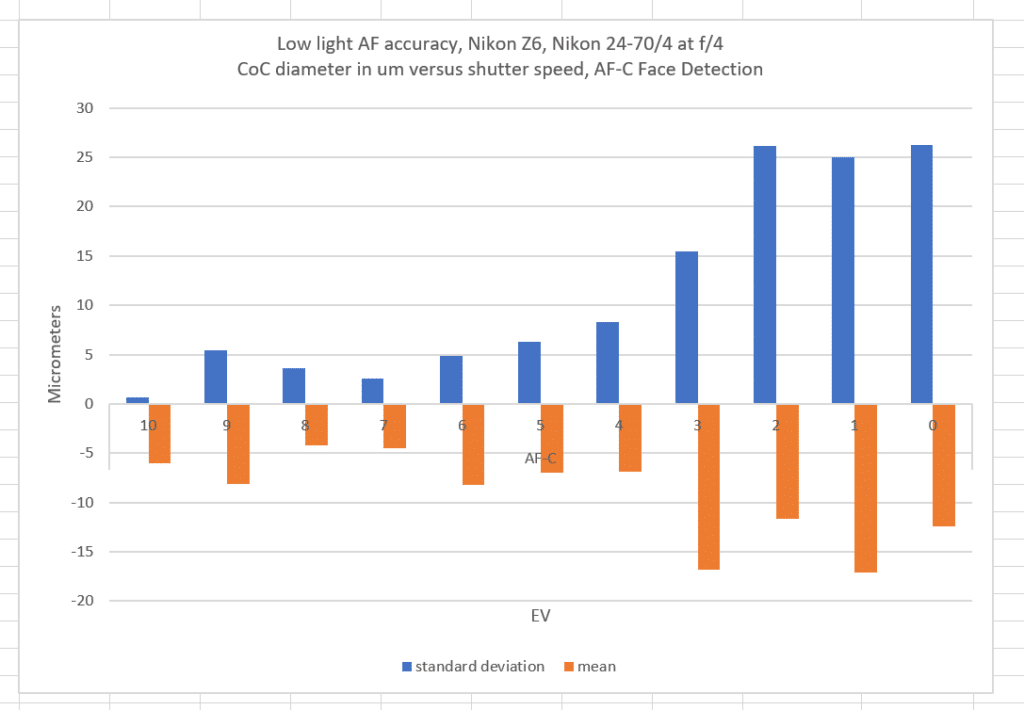 Now we’ll replot the Z7 data that fits with that vertical scale: 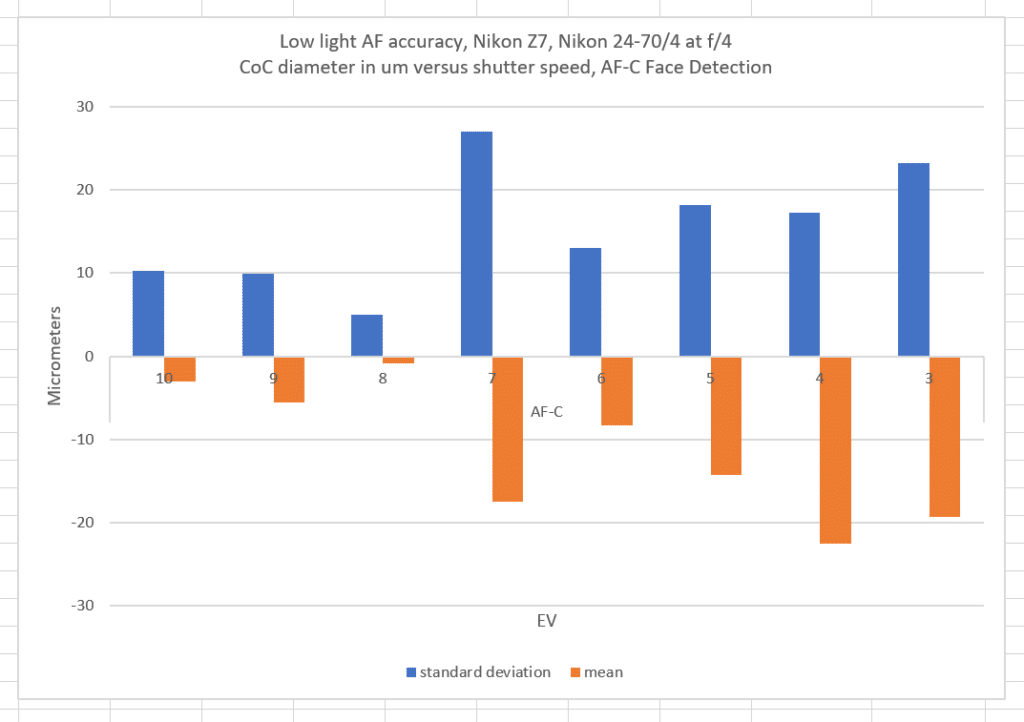 The Z6 does much better than the Z7 when things get really dark, to the tune of two or three stops.

Nikon says the Z7 autofocus works down to -1 EV, and the Z6 can manage -2 EV. I find a bigger difference between the two cameras. I may have put both cameras at a disadvantage in this test by underexposing by almost two stops, but that was necessary in order to make my focus depth measurements off the ramp accurate. In any event, it affected both cameras equally. Also, low light autofocus performance is probably better with a faster lens. In general, the Z6 appears to be slightly more accurate than the Z7 when the metric is CoC diameter. But the Z6 is even better than that with respect to sharpness degradation from the best the sensor can do, since its pixel pitch is 6 um, substantially larger than the Z7.