The color balance of the Sony image is quite different, even though all three were developed in Lightroom with the Adobe Color profile, and the white balance set to Cloudy.

I used ISO 64 for the Z7 and ISO 100 for the a7RIII, and put the camera on a set of solid RRS carbon fiber legs, with an Arca Swiss C1 on top. I focused in the center for the images that formed the basis for the center crops, and in the upper left for the ones that got cropped that way. Hence, focus curvature is nulled out. I made three sets of images at each setting, and picked the best one — that was hard because they were all about the same. I developed the images in Lightroom, and thus I can’t turn off all lens corrections. I did turn off all the corrections, including vignetting, in the camera. The Lr default sharpening was overly aggressive, so this is what I used:

Because Lr does some sharpening behind the scenes, it is not guaranteed that all three sets of images have the same amount of sharpening. In fact, it appears that the Otus has less. So sharpness assessments of these images comes with an asterisk.

Now I’m going to show you some highly magnified crops. If you’ve seen my explanation of them before, just jump to the images. If not, I need to spend some time telling you how to interpret them. They’re at roughly  250% magnification, enlarged to 700 pixels high on export from Lightroom; the magnification of the Sony images being slightly higher to compensate for the small difference in reolution between the a7rIII and the Z7. If you just want a rough idea of the differences, just look at the images as displayed in-line in the posts. However, if you wish to compare these images in detail, you should view these images by clicking on them to see the source files, then set your browser for 100% zooming. Even better, download them and make Photoshop stacks.

I made a series of crops of the center of the field, but I’m not going to show them to you, since they look so similar. I’m just going to show you the upper left corner.

There is a loser in this particular triplet: the Zony. Purple fringing abounds, and it’s just not as sharp as either of the other two lenses. The absolute sharpness is not bad at all, though; it’s just that the competition is so good. I’m having a hard time choosing between the Nikon S and the Otus image for sharpness. That is high praise for the Nikon lens. The Nikkor has just a bit of LoCA visible, though, and the Otus looks very clean.

Again, the Zony lags. Again, the biggest difference between the Otus and the Nikkor is the low LoCA of the Otus.

I would have expected the Zony to have crisped up a bit more by now. The 50S is looking really good. The Otus is looking even better.

Now the Zony has come into its own. The Nikkor S is almost as clean as the Otus.

Let’s dig a little deeper. The above represents what you’re going to see in Lightroom. But what if you want to look at the characteristics of the lenses themselves, uncorrected by the raw developer? I developed the three f/1.8 images in Raw Therapee using the Neutral profile, which does no sharpening or lens correction at all. Then I tweaked the exposure in Lr. Here’s how that came out:

The 50S looks a hair sharper than the Otus, which leads the Zony. The Nikkor appears to be almost as well-corrected for chromatic aberration as the Otus. LoCA is the Zony’s big issue, and it shows here.

All of the captures are improved, but Raw Therapee’s software magic can’t compensate for the Zony’s chromatic aberration. The lovely character (or lack of it) of the Otus is apparent, but the Nikkor is, amazingly enough, right in there.

There is no loser here. All the lenses are quite good. The Nikkor is obviously the price-performer, stealing that title away from the Zony in what is not a close call.

Incidentally, the Zony is quite a bit smaller than the 50S: 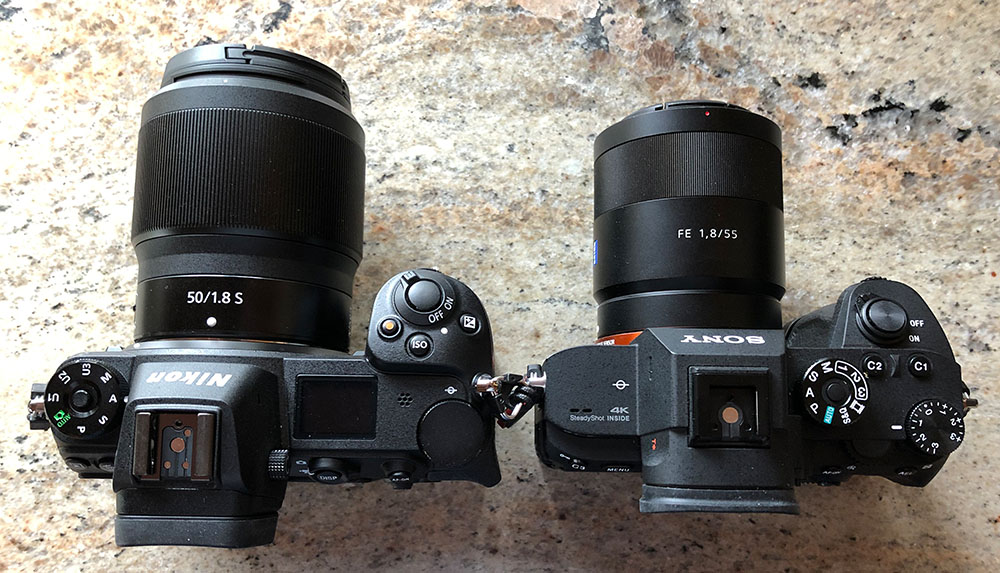