Up to now, I’ve been doing my lab testing of the face detection autofocus accuracy with a photograph as the face target. The camera is happy to recognize the photograph of a face as if it were an actual face, and it focuses on the photograph pretty accurately. However, as a reader has pointed out, real faces aren’t flat. Human subjects aren’t good for the kind of precise, repeatable lab testing that I do. They move. They change expression. They may not be available when I want to run a test.

So I got a head mannequin. The one that I got has real eyelashes and eyebrows, which is not usually the case. I think I’m going to call it Shirley, after the famous Kodak models. Here’s a crop of one of the images that I used in the testing reported here. 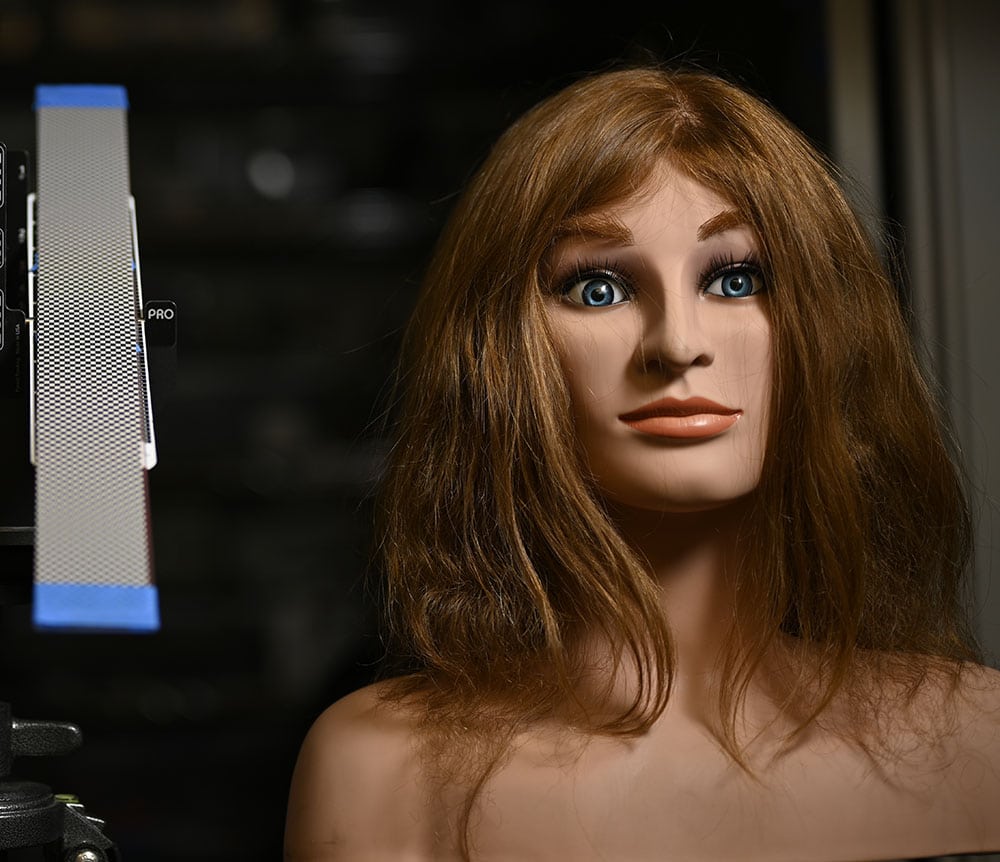 The checkerboard ramp at the left is how I measure the focal plane.

I’m still learning about how to use this target. Yesterday I set up a Z7 with the Nikon 50 mm f/1.8 S lens on it, mounted the camera to a Foba camera stand with an Arca Swiss head, set the ISO to 64, the shutter mode to silent, and lit the target with an Aputure 120DII set to full power and connected to a 12-inch parabolic dish with a shower-cap diffuser. I turned on face detection, set the camera to AF-S. The lens was wide open, and the shutter speed turned out to be about 1/200 second, so there was plenty of light. The subject distance was 1.4 meters; Shirley’s head was about 1/3 the height of the landcape-mode frame.

I made a run of 16 exposures using Pinpoint AF mode with the focus point on the camera-left iris, and another run of 16 with the focus mode set to Auto. The camera had no trouble finding the face. Then I analyzed the difference in focal planes for the two sets of images.

Both sets of photographs had little variation in the focal plane. The Pinpoint images were correctly focused on the camera-left iris. However, the Auto-Face Detect images were front-focused, by 34 micrometers (um)  in the image plane, which is enough to give a misfocus-created circle of confusion (CoC) of 19 um. While that’s not a huge blur circle, it’s not what you’d call real crisp in an era of cameras with pixel pitches approaching 4 um.

Here are blowups of the last image of the Pinpoint series and the first one of the Auto/Face Detect series:

You can see the amount of front-focus in the lower image is enough to lose most of the detail in the iris (and real irises have more detail than Shirley’s). The hair across the nose is sharper, showing the direction of the focus plane shift. It may be that the strands of hair over Shirley’s eye confused the camera. I will use my less-than-rudimentary female grooming skills to give her a more put-together do for the next series, but this is the kind of result that I’ve seen a lot of in real-world photography. It’s not perfect, but it’s still a whale of a lot better than you can do with a DSLR and AF, especially in the consistency department.

If this is a problem for you, the Z7 offers the ability to bias the autofocus. The problem is deciding where to set the bias that will cover a range of subject distances. This is not an issue that just relates to face detection. The newer Sony MILC’s have eye detection, which in theory — and probably is — somewhat better. But I’ve seen the Sony cameras focus on the eyelashes rather than the iris. And Sony FF MILCs have no way to bias the focal plane for native lenses.

I will stipulate that this much focusing error is not likely to bother most photographers who are not making some or all of their living with their cameras. But for those that care about it, here is the first evidence that I’ve seen that the effects that have been anecdotally reported can be reproduced with some consistency.