There has recently been some controversy about the relative noise behavior of the Nikon Z6 and Z7 in deep shadows. I am in the process of addressing those differences in a series of posts which will include both quantitative results and visual ones. The series starts here.

For reference, here is the normalized shadow noise graph for the two cameras at ISO 100 (If this makes no sense to y9ou, please go back to some of the previous posts): 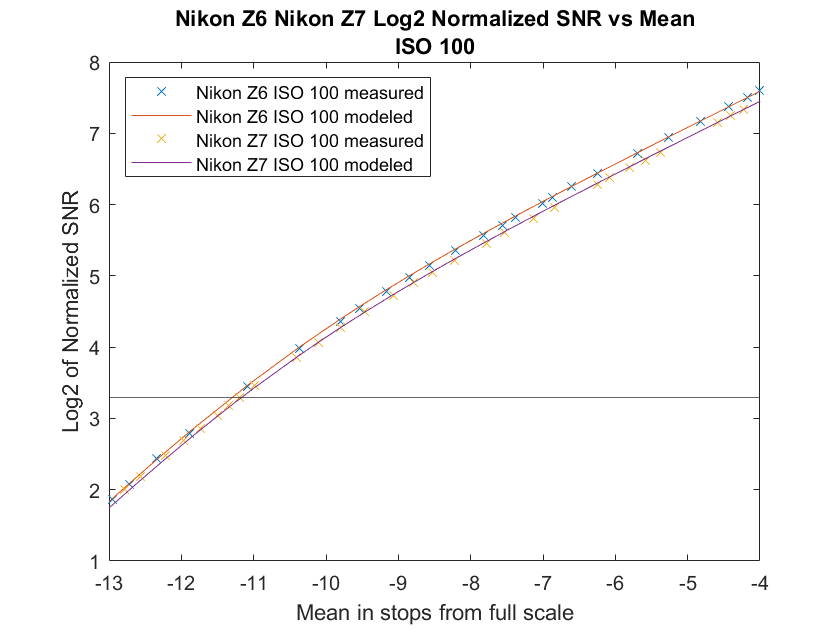 This says that, at the Claff SNR, the two cameras are almost in a dead heat, with the Z6 ahead by a nose.

Here are a pair of ISO 100 images made at f/11 and 1/2000 second. This is the same exposure as for the ISO 8000 images in the previous post. I developed the images in Lightroom, with Adobe Standard profile, sharpening set to the default except the amount was dialed back to 20. I turned off the noise reduction, white balanced each ISO/exposure pair to the eyedropper balance gotten by clicking on the number 20 patch on the Z6 image.

I had to do some extreme exposure moves to make these look other than black. I gave each a +5 using the Lightroom exposure tool, then another +4 using the Photoshop exposure tool.

Even though the raw values are about the same, the Z7 image is substantially darker. I put this down to differences in the Lightroom color profiles. This did not occur at ISO 8000, so one or both of the profiles are likely nonlinear.

If I give the Z7 an additional +1.5 EV exposure boost in Lr, the images densities of the two cameras look closer:

You are welcome to look at the above images at 1:1, but, since the cameras have different resolution, they are different in size. In order to map those images to the viewing conditions implied by the Claff PDR definition, I sized the entire captures from both cameras to 1600 pixels high, cropped to the chart. That left me with some small images (380×255 pixels), so I exported them from Lightroom resized to 1000×672, or a bit less than 300% magnification.

Here they are (this time I boosted the exposure as indicated witha second pass through Lioghtroom and the numbers are the total of the two boosts):

I find very little to choose between the two images other than the color balance. Both are pretty awful.

Next up: some conclusions from this testing.