There has recently been some controversy about the relative noise behavior of the Nikon Z6 and Z7 in deep shadows. I am in the process of addressing those differences in a series of posts which will include both quantitative results and visual ones. The series starts here.

Now it’s time to compare the visual effects of images pairs with the charts I generated earlier.

But first, I needed to make sure that the Z6 and Z7 that I’m using produce the same raw file densities with the same exposures. I put a 50 mm f/1.8 Nikkor S on the cameras in turn and made a series of images at various ISO settings and exposures of a Macbeth chart lit with a Westcott 1×2 foot LED panel set to 5500 K in a Westcott softbox. Then I compared the first green raw channel averages for a few patches. Across the two cameras, they averaged within 1% of each other (I find this agreement to be remarkable in consumer items like these cameras). The white balances were a little further off, with the average of the R/G ratios within 2% and the B/G ratios within 1%.

With that out of the way, I made identical exposures of the Macbeth patch set with the two cameras at all the ISO settings between 100 and 12800. The exposures were calculated to bring some of the gray-axis patches across the bottom of the chart (patch numbers 19 through 24, starting at the top left and counting row-first).

I developed the images in Lightroom, with Adobe Standard profile, sharpening set to the default except the amount was dialed back to 20. I turned off the noise reduction, white balanced each ISO/exposure pair to the eyedropper balance gotten by clicking on the number 20 patch on the Z6 image.

For reference, here’s how the two cameras compare quantitatively at ISO 8000: 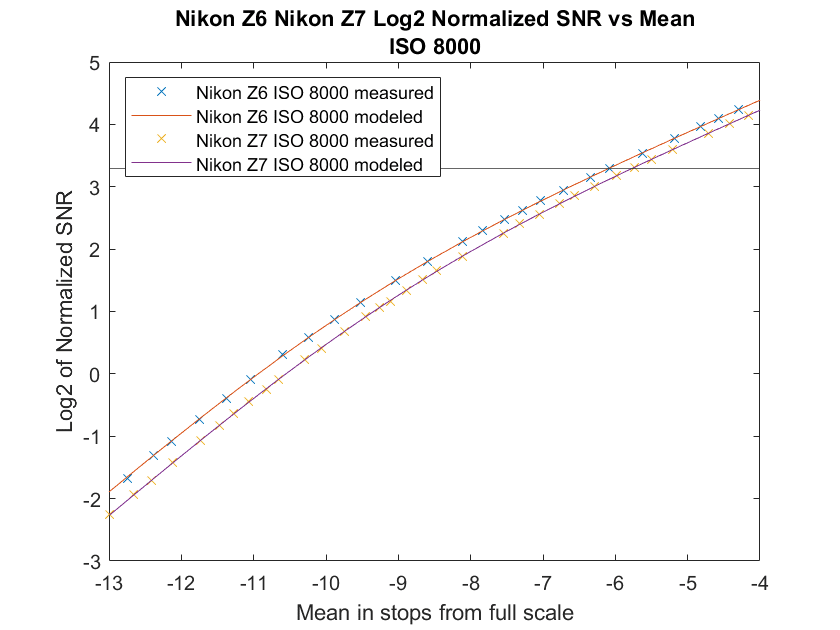 At the Claff SNR, marked with a horizontal line, the Z6 is better by a few tenths of a stop. Here is a crop to the chart at 100% magnification for each camera, with a +1 EV Exposure boost in Lightroom. Patch 22, the fourth from the left on the bottom row, has the raw green channel at six stops below full scale, or about the Claff PDR threshold.

You are welcome to look at the above images at 1:1, but, since the cameras have different resolution, they are different in size. In order to map those images to the viewing conditions implied by the Claff PDR definition, I sized the entire captures from both cameras to 1600 pixels high, cropped to the chart. That left me with some small images (380×255 pixels), so I exported them from Lightroom resized to 1000×672, or a bit less than 300% magnification.

The Z6 noise does appear to be slightly less, but the Z7 noise is more pleasing to my eye since it has more high spatial frequency content.