In response to yesterday’s post, I got a question:

Are you suggesting that the autofocus accuracy of the Z7 is “off-the-charts” better than a D5?

If so, in what situations?

By the dawn of the CaNikon DSLR age, autofocus (AF) reigned to such an extent that the SLRs manual focusing aids had either disappeared or become vestigial. Autofocus was fairly mature, and the early DSLRs were low-res by today’s standards, and AF worked just fine. As the DSLRs passed 16 MP, AF accuracy started to become iffy in some situations. But liveview came along and saved out bacon in static work where high accuracy was required. I’ve had three D3’s (counting the S versions). I always thought the AF was just fine. When I got the D4, with its fractional resolution increase, AF was no problem. But with the D800E? Not so much. Part of the problem with the D800E was that I was shooting static subjects with it, as opposed to what I was using the D4 on. A big part of the problem was the greater resolution of the D800E. But a big part of my dissatisfaction with the D800E AF was that I was by then putting my toe in the MILC world (we called mirrorless cameras EVIL in those days — it stood for electronic viewfinder interchangeable lens), and even the relatively primitive AF systems in those cameras afforded better accuracy on static subjects than DSLR AF.

Moving along to the situation in the last couple of years before the Z7 appeared, I found myself with a D5, a D850, and several Sony full frame MILCs, including the a7RIII and the a9. By then, the AF performance of the MILCs had come a long way, and, in spite of DSLR improvements in AF dynamics and low-light sensitivity the MILC/DSLR comparison s were striking. For static subjects, and even for those not exhibiting violent motion, the MILCs were head and shoulders above the DSLRs for AF accuracy. For sports and the like, the best Sony camera I’ve used is the a9, and the top DSLR is the D5. Performance in that environment is god-top-excellent in both cameras. Each has its strengths, but overall I’ve give the nod to the D5. I suspect that some of that superiority comes from the generally faster-focusing Nikon lenses (I use the Nikon big iron lenses for sports, and Sony only has one of those, the 400/2.8, which I had on order before I got the Z7, but have since decided not to get).

But this is mostly a post about static AF accuracy, and here’s a rather dramatic demonstration of DSLR/MILC differences: 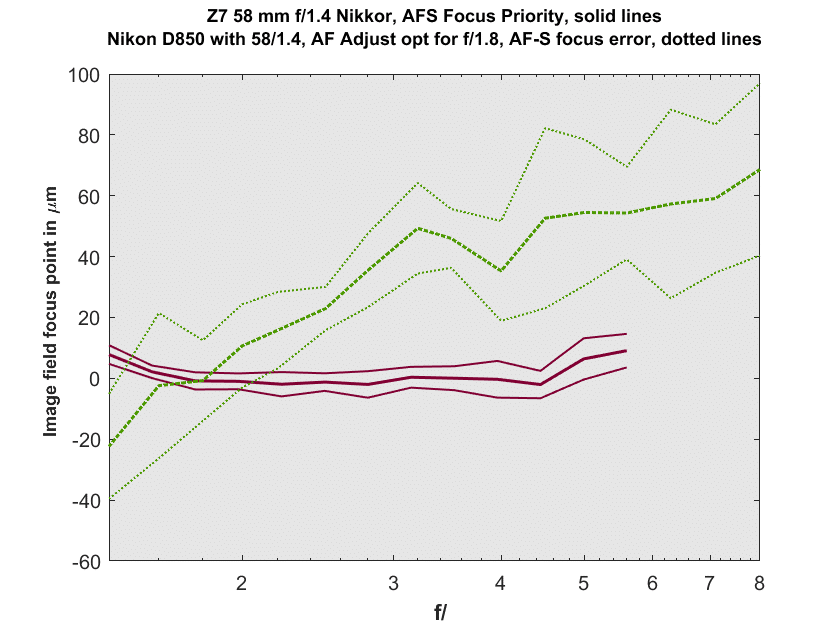 What’s plotted is the errors in focusing for 16 shots at each f-stop, at the sensor plane with the same lens — the Nikon 58 mm f/1.4 — on both the Z7 and D850. Zero is perfect focusing, and front-focusing is indicated by negative numbers. The green dotted lines are for the D850, and the red solid ones for the Z7. Luminance sharpness is the criterion for the plane location calculation. Not only are the mean errors much smaller for the Z7 than for the D850, the scatter, as indicated by the distance between the thinner plus and minus one standard deviation lines is less with the Z7. Note that the red channel longitudinal chromatic aberration (LoCA) of the 58/1.4 pulls the luminance error upwards at f/1.4, as the camera is optimizing for the green channel.

Micrometers of focal plane error may not mean much to most photographers, but many technically adept ones relate to circles of confusion (CoCs) due to misfocusing: 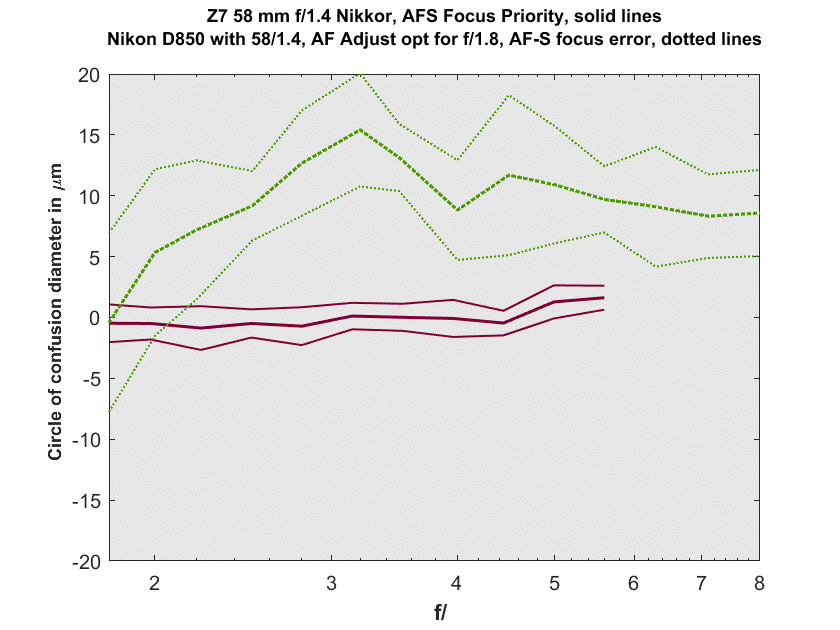 I know that you can’t have negative CoC diameters, but I’m choosing to indicate front-focusing that way. The pixel pitch of both the D850 and the Z7 is 4.35 micrometers. The Z7 errors are mostly less than one pixel pitches. That’s pretty darned sharp. The D850 errors get well over 2 pixel pitches. Not exactly blurry, but not critically sharp.

MILCs in general, and the Z7 in particular, have a couple of arrows in their AF quiver that are denied to DSLRs.

First, they can focus at narrower apertures than wide open. This is actually more complex than it appears, since neither the phase-detection autofocus (PDAF) systems in MILCs nor the ones in DSLRs respond equally well to light rays from all parts of the lens, but the DSLRs need to have their lense wide open during focusing to keep the optical finder nice and bright. In a MILC, the finder brightness is whatever the camera firmware wants to make it, and the Z7 takes advantage of that by focusing at taking aperture for all f-stops wider than f/6.3. The DSLRs are subject to focus error due to lens focus shift upon stopping down (which is in turn a result of spherical aberration in the lens). The MILCs can finesse some of this by aperture management that is independent of finder brightness.

Second, MILCs can let the PDAF system get close to the right focus, and then trim the focus plane with a quick application of contrast-detection autofocus (CDAF). PDAF has a nasty little feature: as you get closer and closer to the right (or right by some internal logic) plane of focus, the PDAF signals get smaller and smaller, so noise in the system can throw the results off. CDAF has it’s own quirk: you can’t tell if the image is in focus except by defocusing it slightly, and then you’ve got to put it back where it was. Still, the CDAF trim phase produces more accurate results, and also has less scatter (as measured by the distance between the mean-plus-standard-deviation and  the mean-minus-standard-deviation lines in the above graphs).

DSLRs do have an advantage in really dim light, since their PDAF systems can have sensors that grab a lot of photons, while the MILCs have to steal their PDAF sensors from pixels that would otherwise be employed simply to capture images. DSLRs have AF trimming to try to help things out. Unfortunately, AF trimming is stored in the D5 and D850 as one setting per lens, regardless of f-stop, subject distance, and, in the case of zooms, focal length. So any such setting has to be a compromise. The 58 mm f/1.4 in the above test was optimized at the chosen target/subject distance at f/1.8. It has a lot of focus shift, but it is not alone in that regard in the Nikon lens stable.

So, for static AF, the MILCs are the clear winners in this contest. It’s not just the Z7; I’ve seen the same kind of thing with the a7x and a9 cameras, and with the Fuji GFX 50S, which doesn’t even have PDAF and has to do all its autofocusing with CDAF.

As an aside, it has not escaped me that the question at the top of this post concerned the D5, but that I responded with information about the D850. That’s the quantitative information that I have readily at hand. When I was testing the D5, I had not yet created the sophisticated focus accuracy tests that produced the results in the above graphs. I find the D5 and the D850 to be pretty much peas in a pod for static accuracy, although at a pixel level the errors affect the D850 more because of its increased resolution.  I think the D5 is somewhat better than the D850 in dynamic situations.