You are here: Home / GFX 100 / Actual vs calculated depth of field for short GF lenses on the GFX 100S

It occured to me that I have in my current lens-testing protocol a means to measure the actual circles of confusion produced by the GF lenses on the GFX 100S as the subject is defocused, which would allow the actual DOF to be compared to the DOF predicted by geometric optics, upon which depth of field calculators are based.

We’ll start out with the 23/4 wide open and stopped down to f/8, as you might do for landscape work. 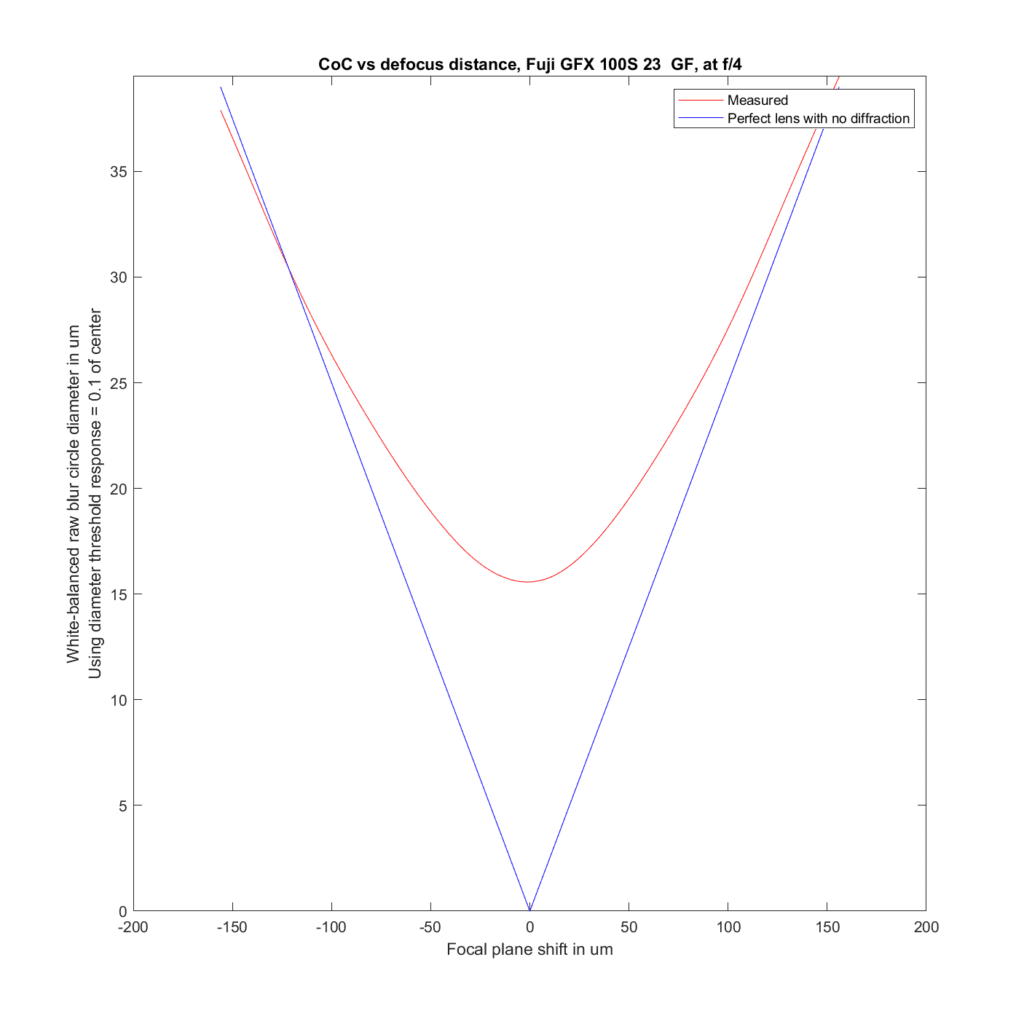 Wide open, the 23/4 GF obeys the predictions of geometric optics quite well except for the situation where the subject is close to being in focus, at which point the images become less sharp than geometric optics predicts. This is not a surprise, since geometric optics does not consider the blurring effects of diffraction, lens aberrations, or the camera’s pixel aperture. 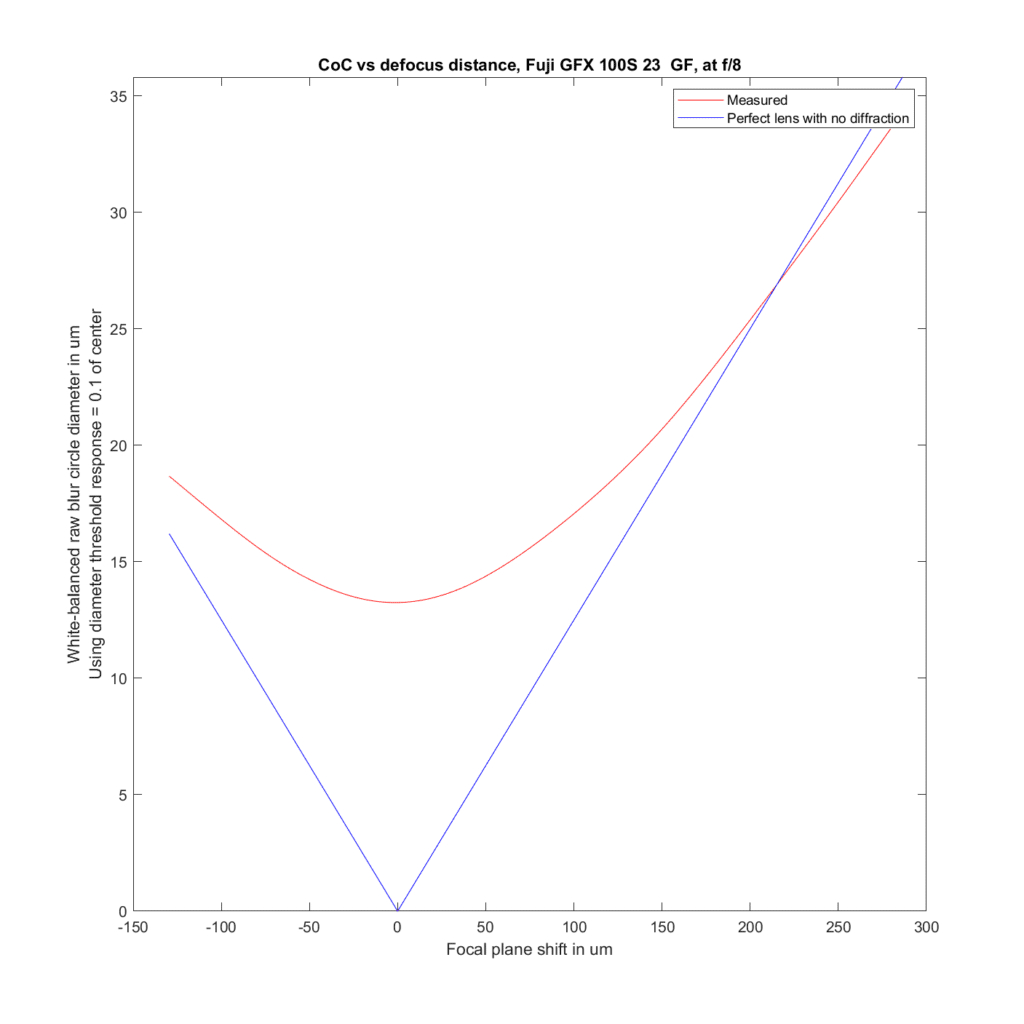 The effect is much the same., except for the image being very slightly sharper than predicted when greatly back-focused. 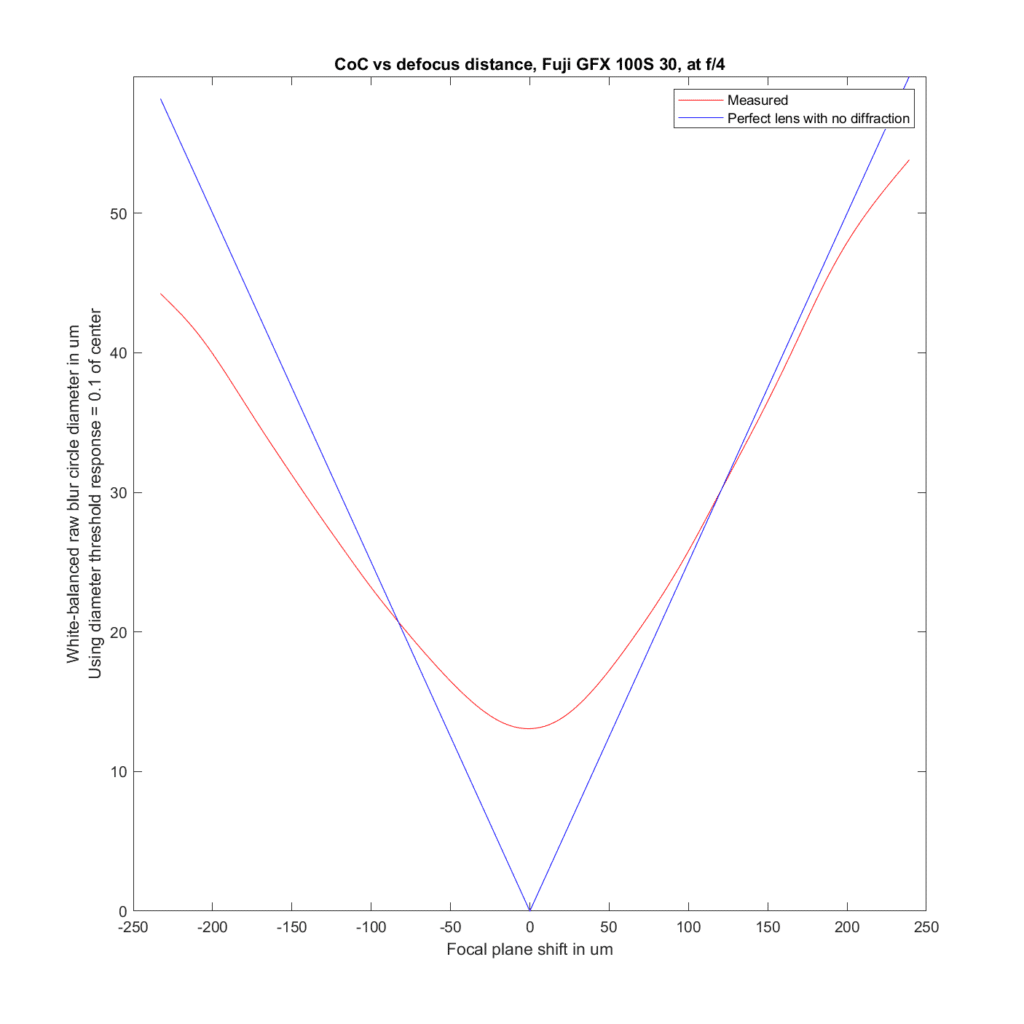 At f/4 the 30 approximately obeys theory for back-focusing, and is sharper than theory indicates for front-focusing. 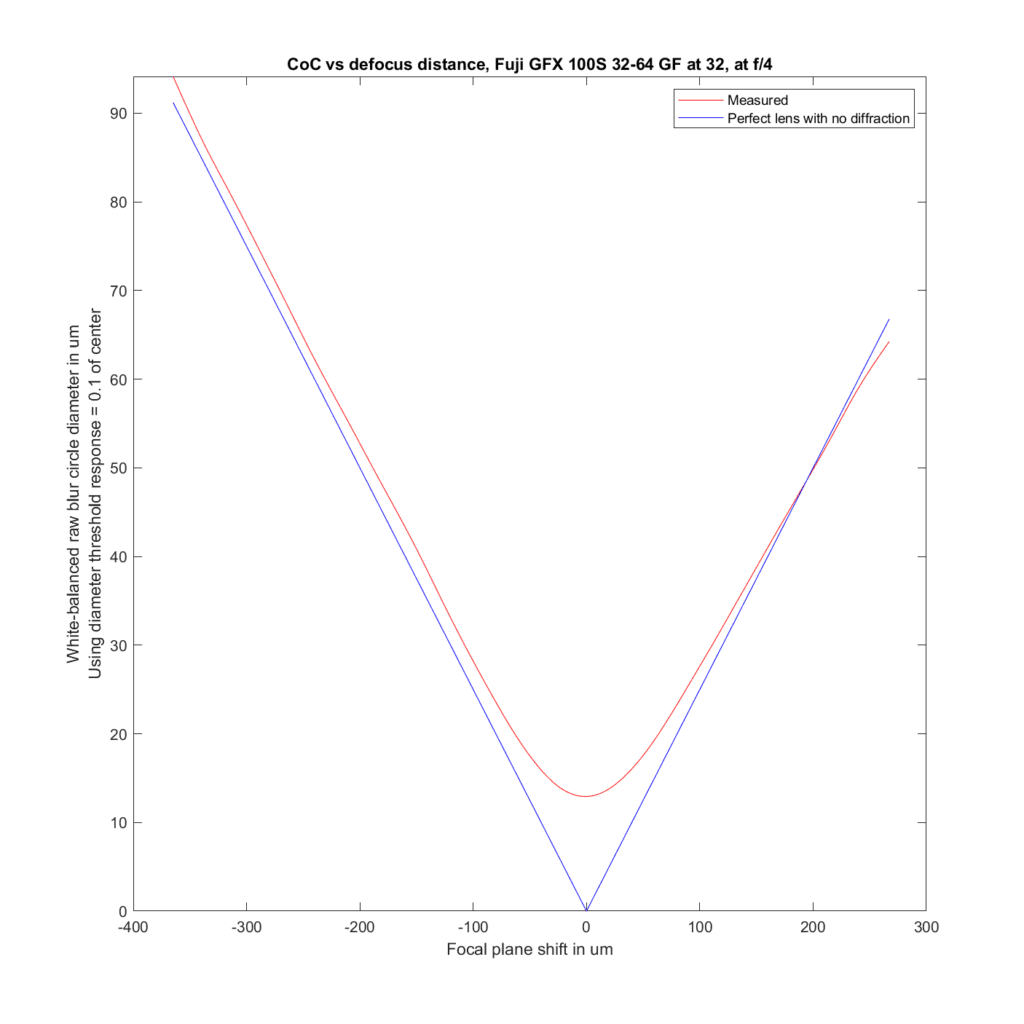 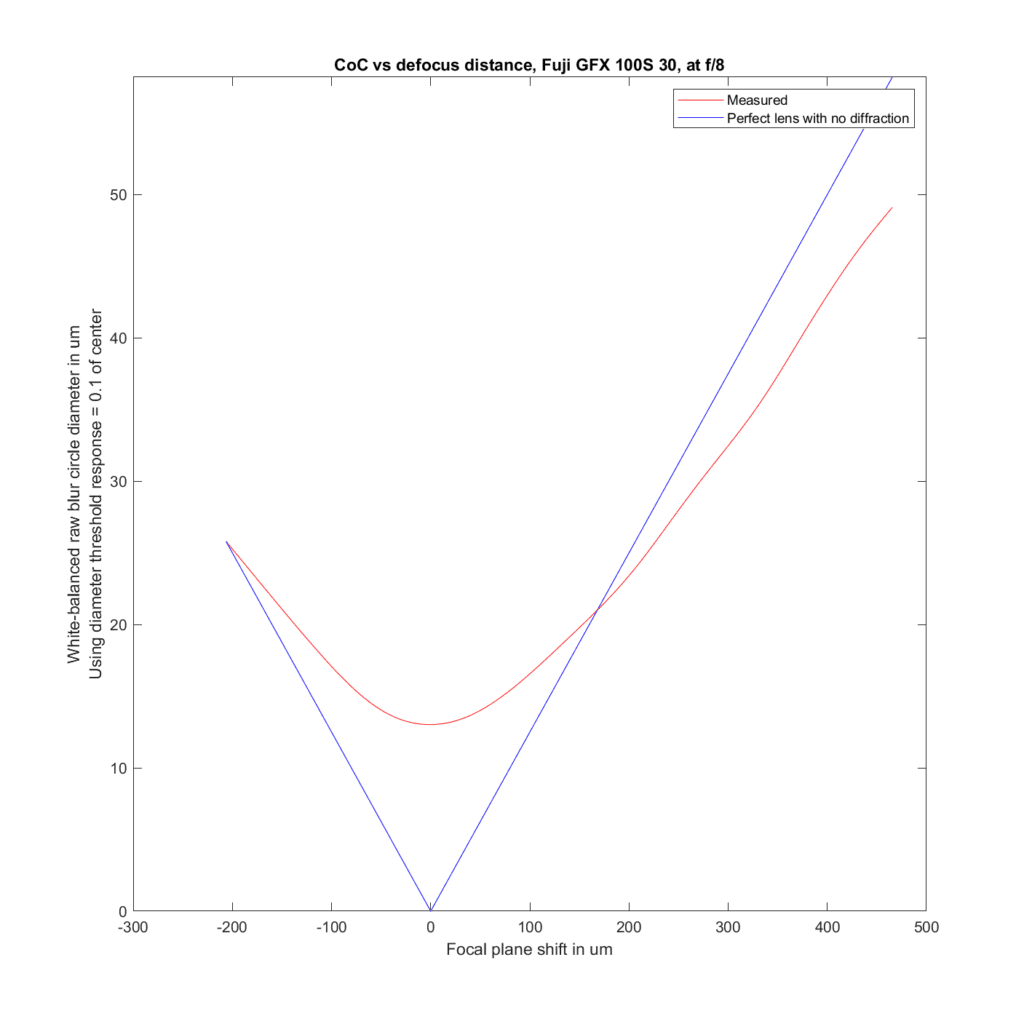 At f/8, the 30 GF produces image that are a bit sharper than geometric theory says they should be. We can’t tell what’s happening at close focusing because the series started to close to in-focus. 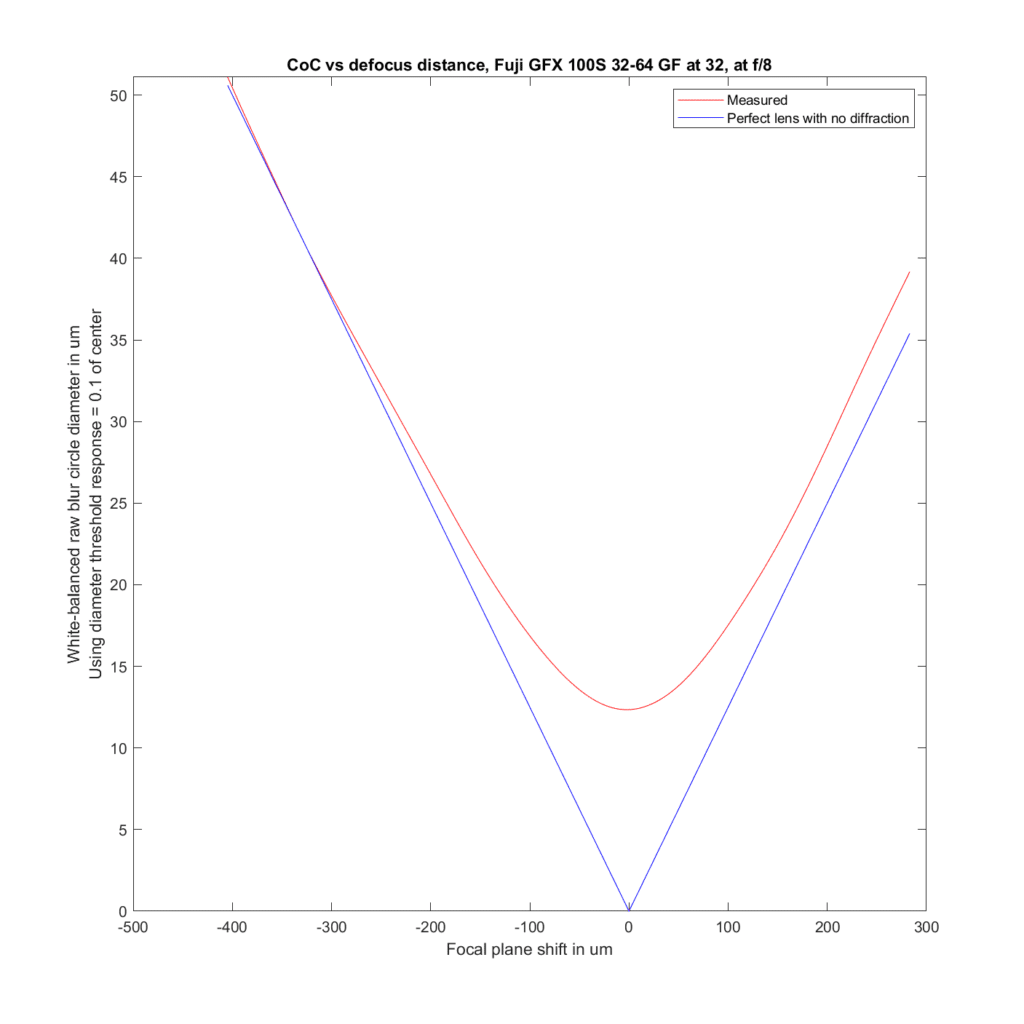 The 32-64 at 32 mm and f/8 is a little blurrier than a DOF calculator would say for back-focusing. 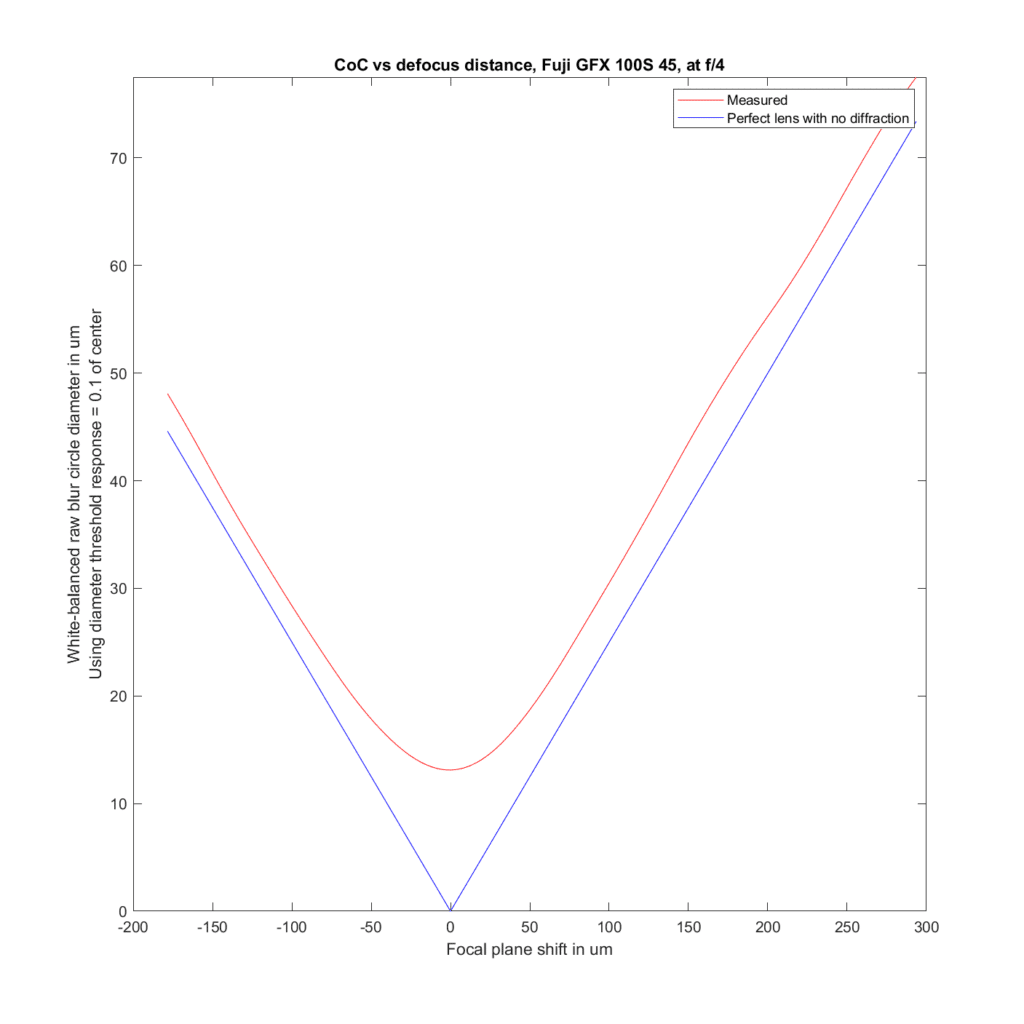 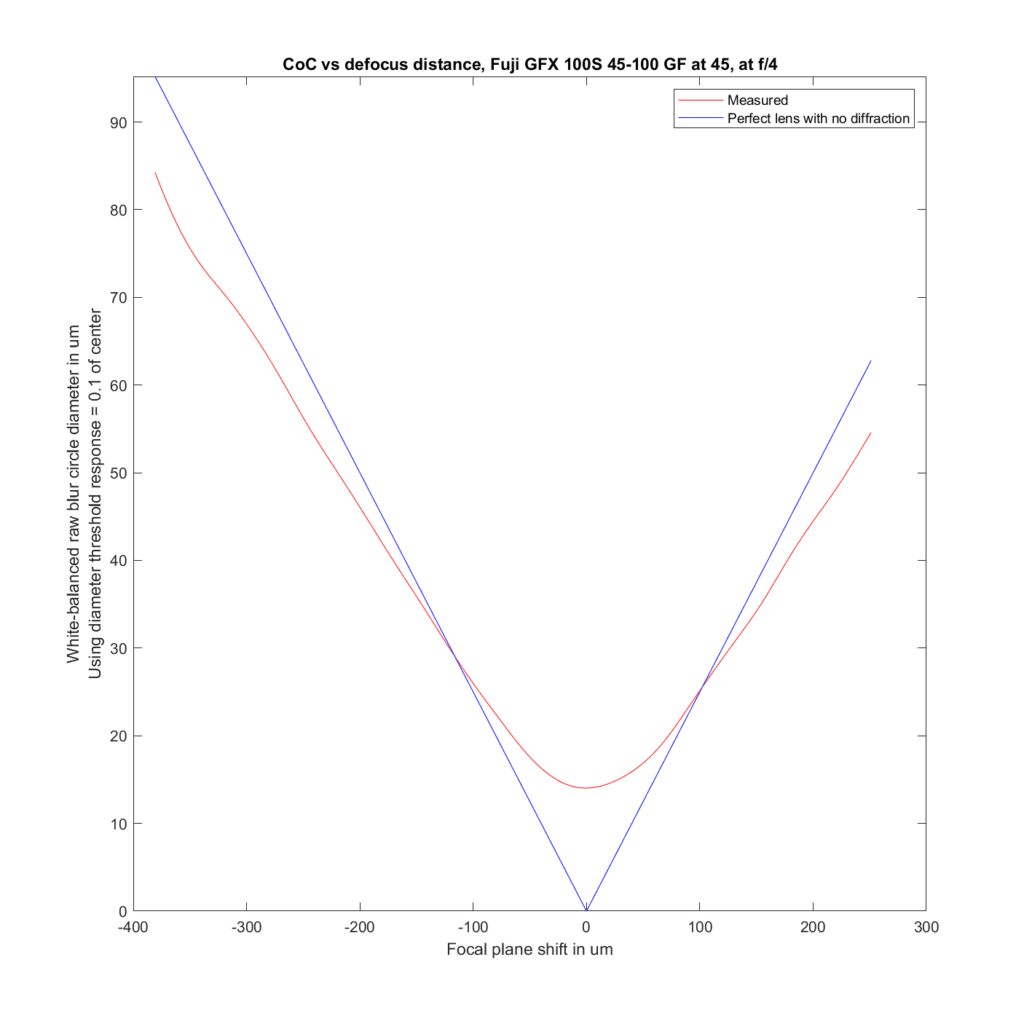 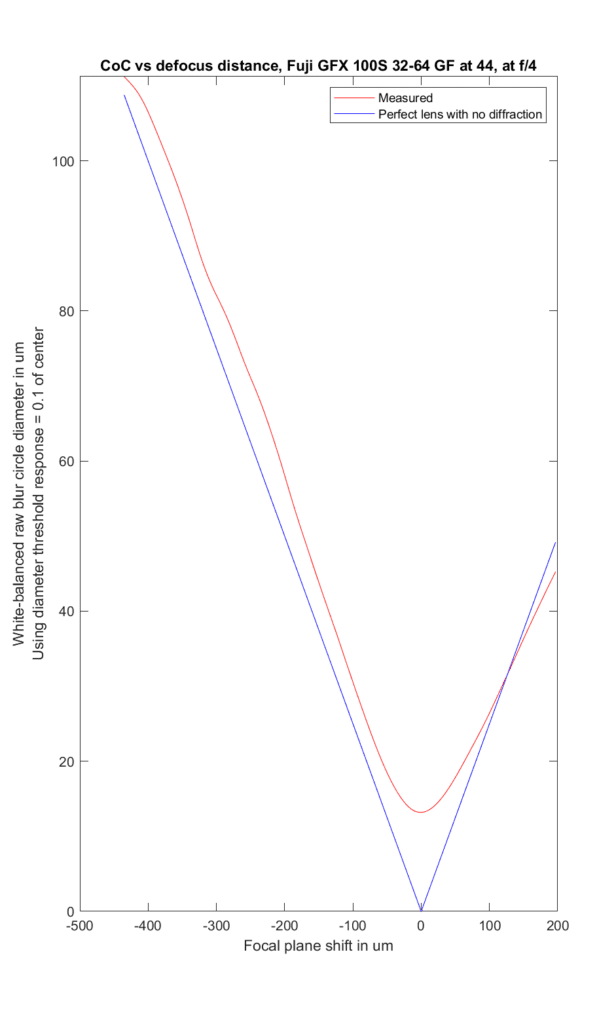 Stopped down to f/8: 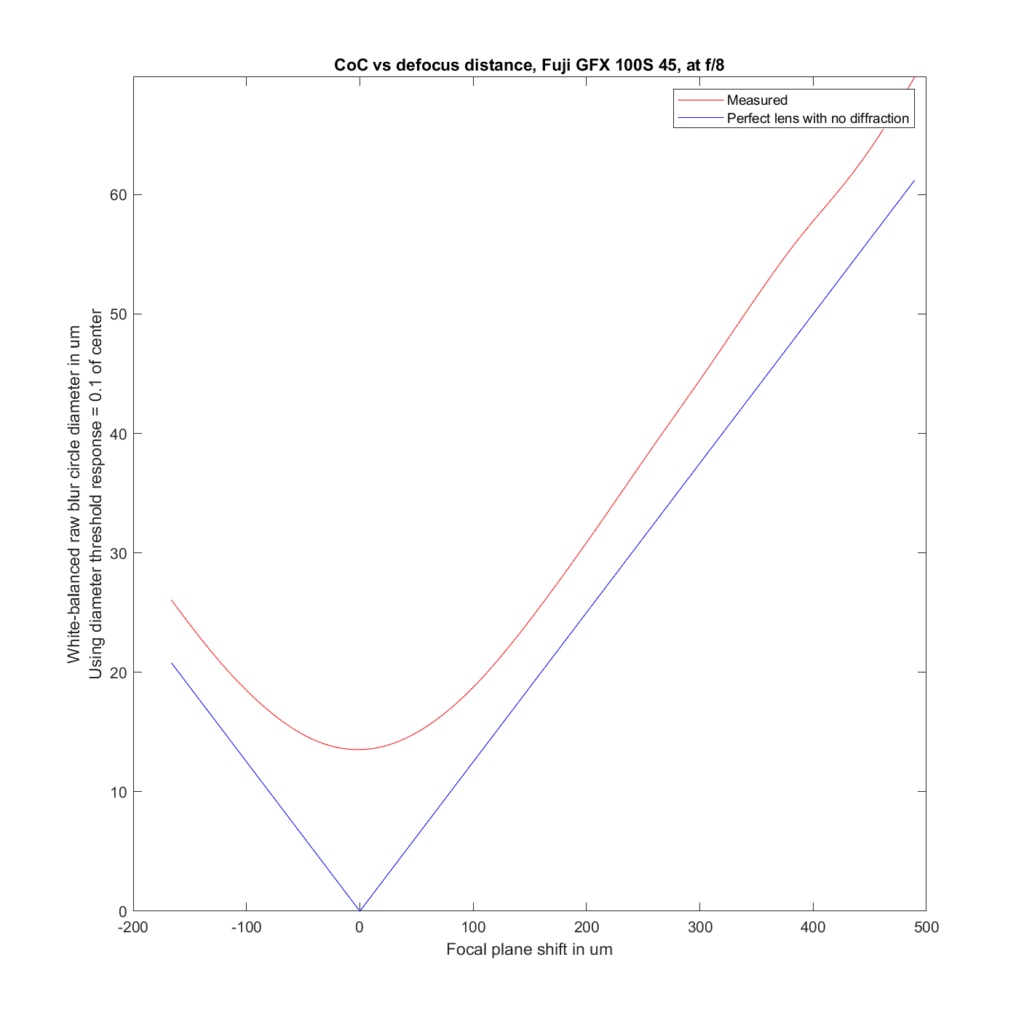 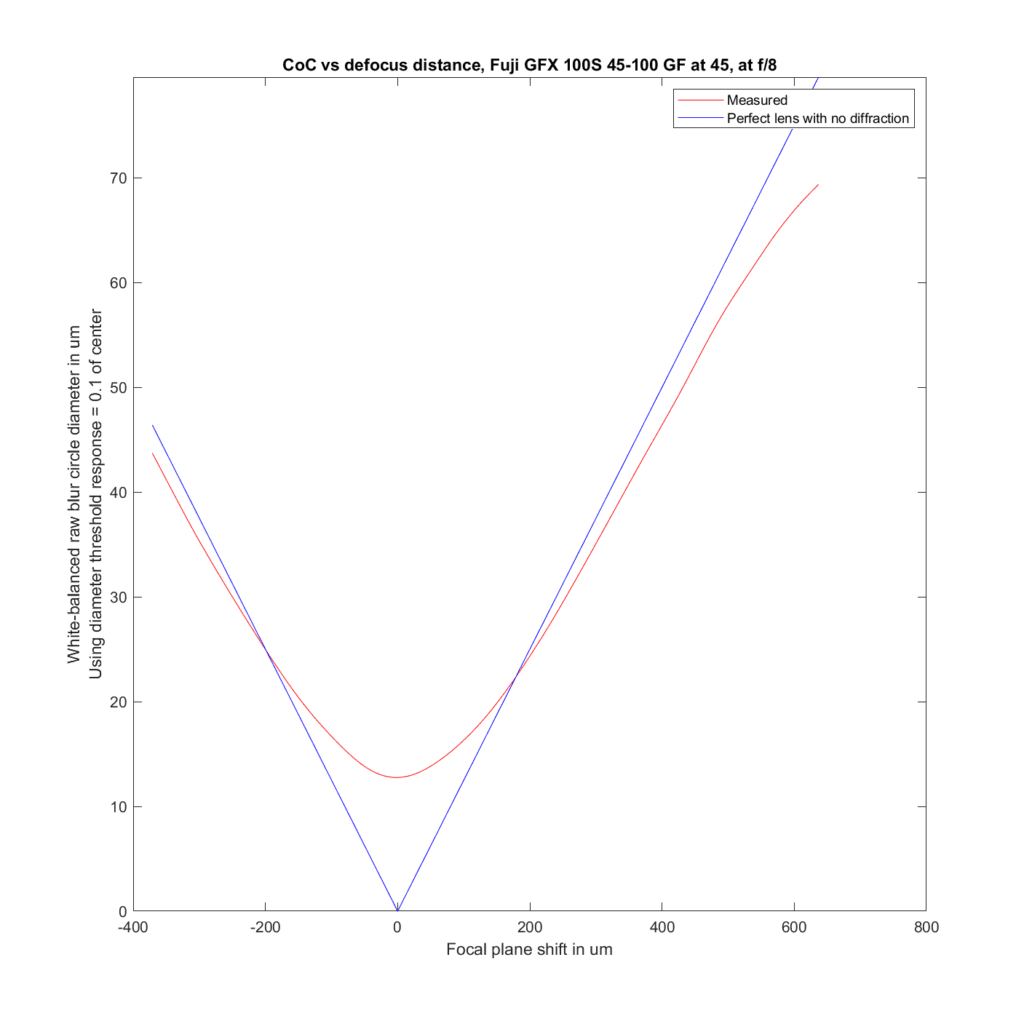 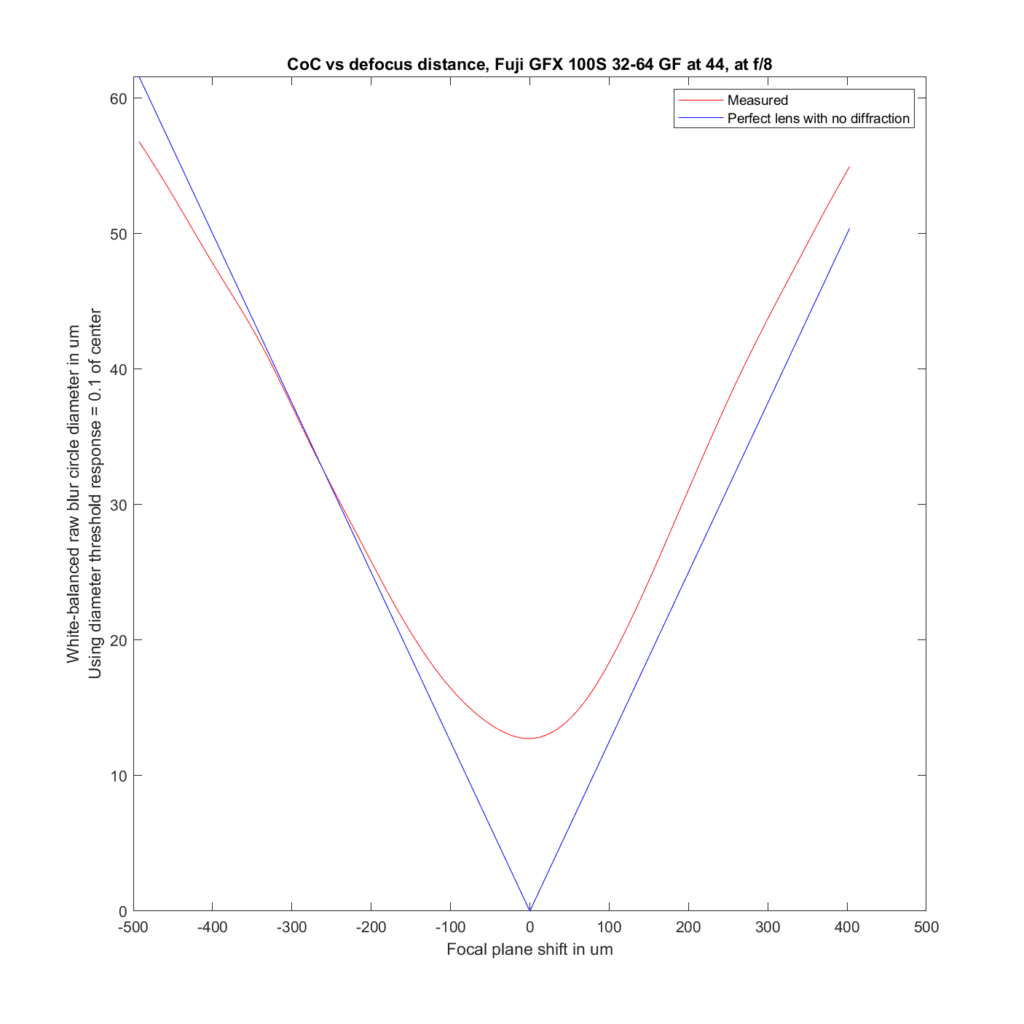 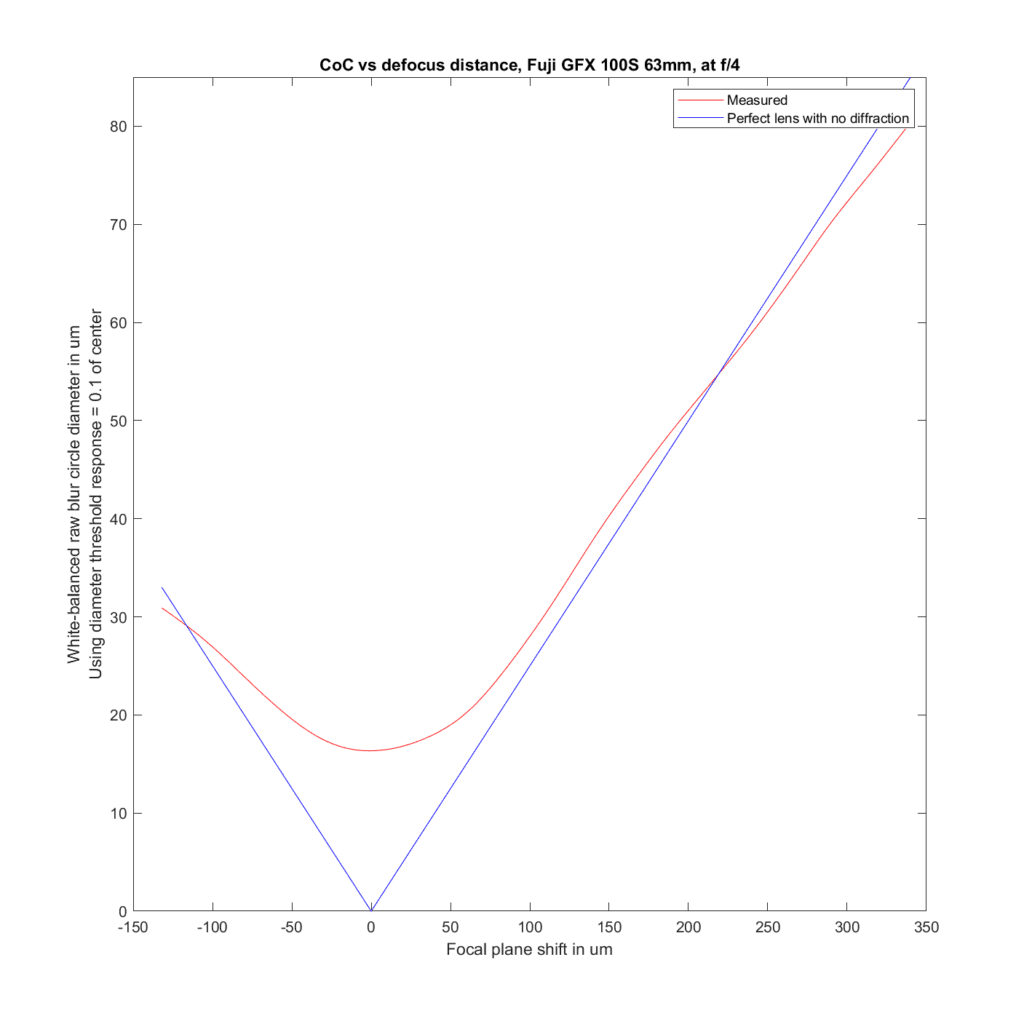 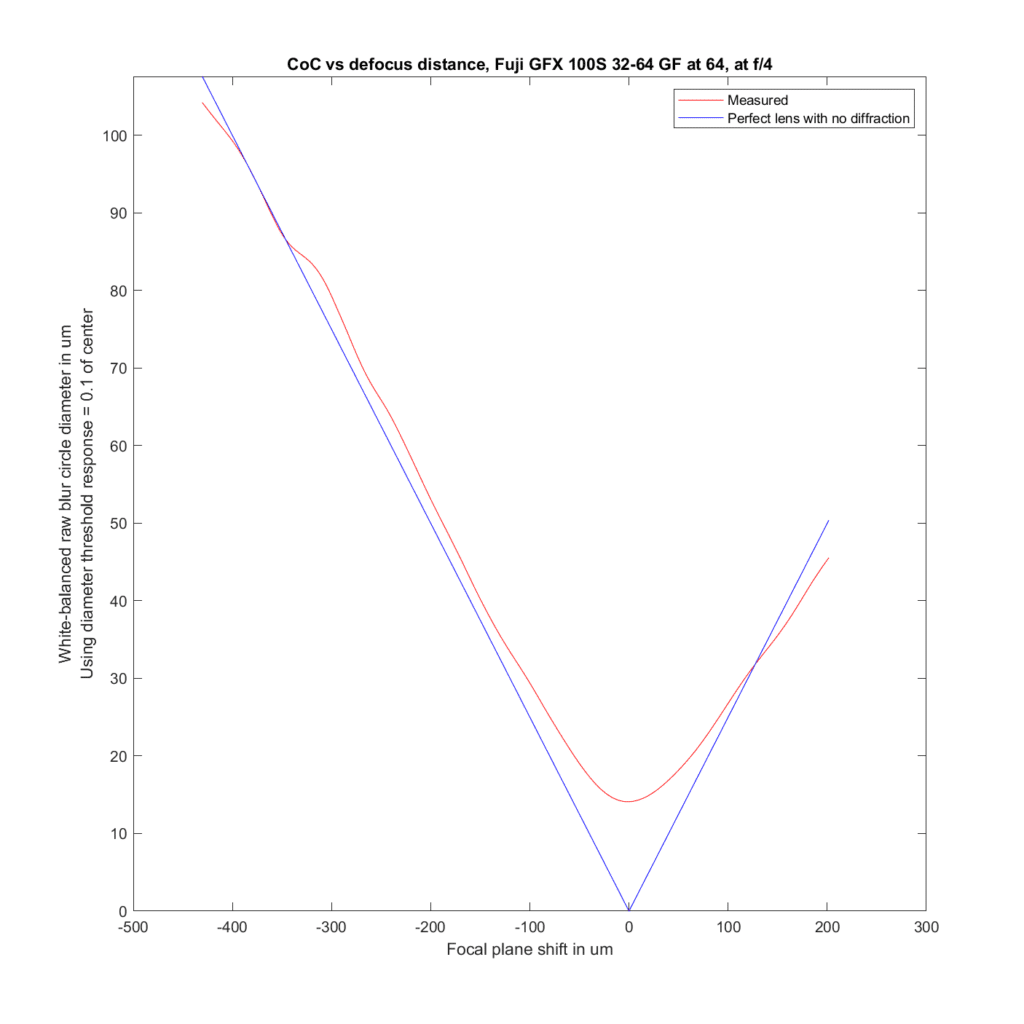 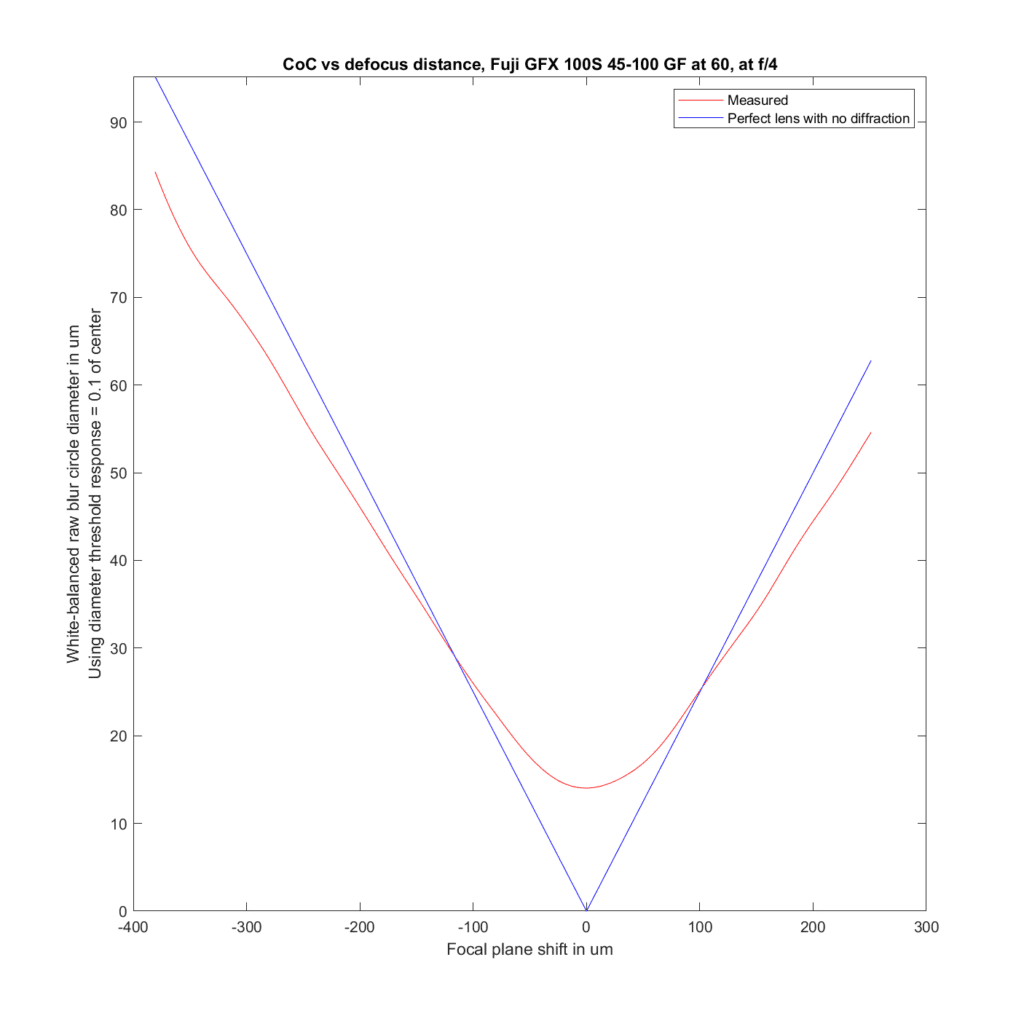 Good agreement in the first two, and slightly better than predicted performance with the 45-100.

Stopping down to f/8: 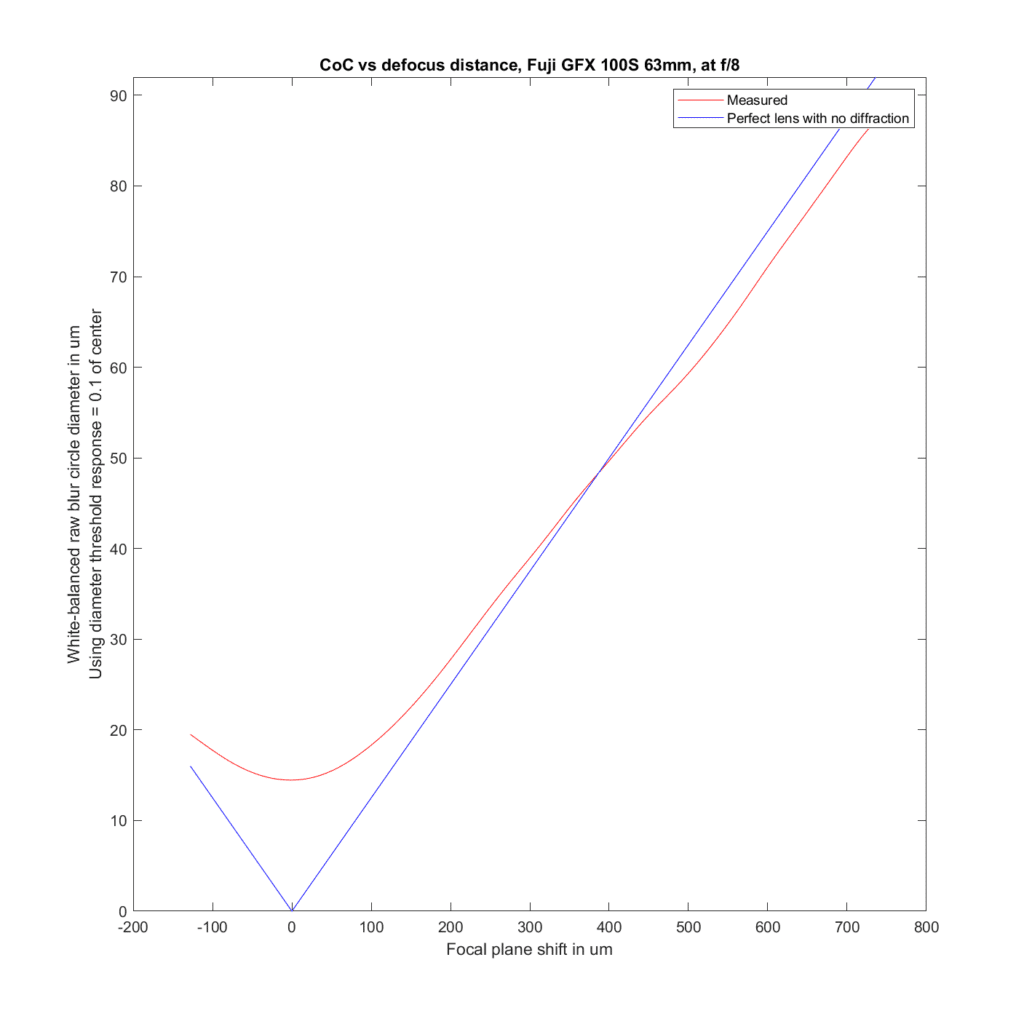 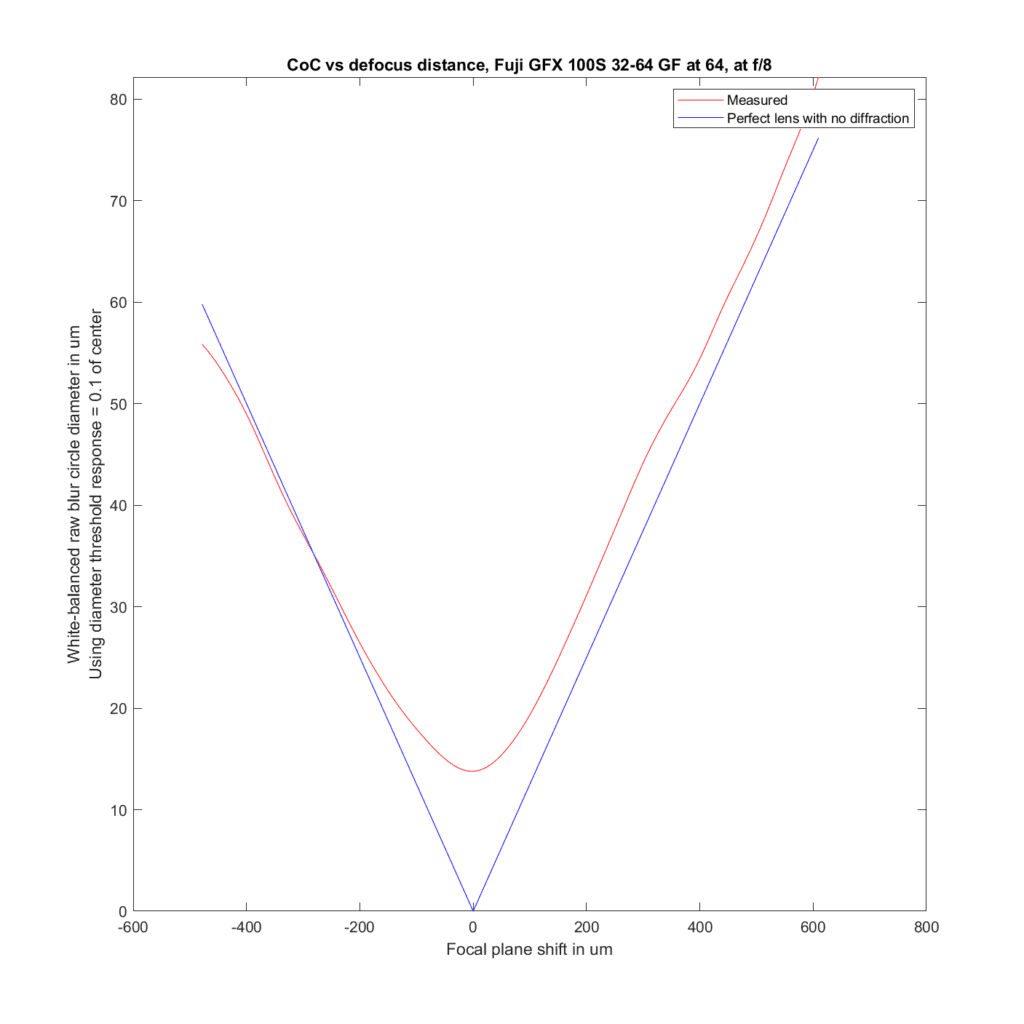 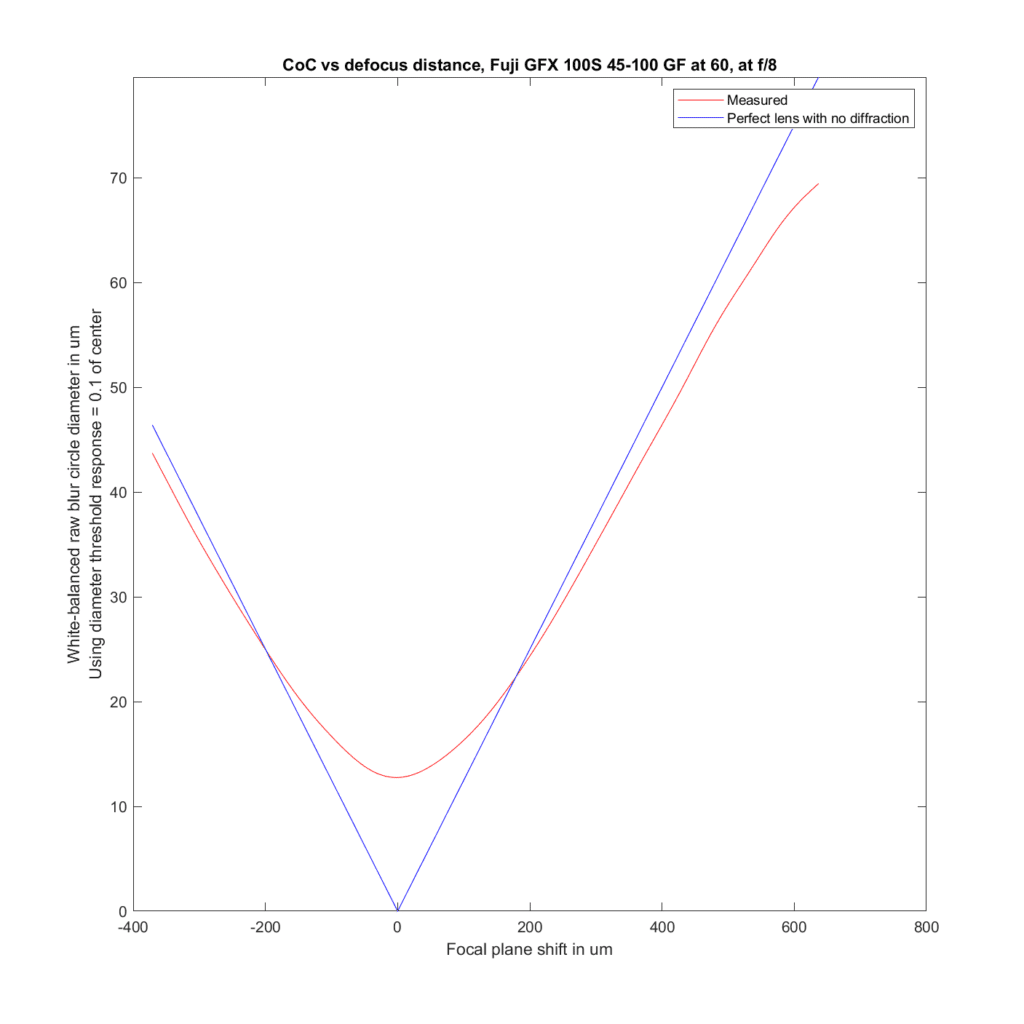 Outside of loss of sharpness near the focal point, even in the cases where there is the most disagreement between the actual blur circles and the predicted ones, these differences are not enough to make much difference in real world photography.

But strictly speaking, although they correlate well, aren’t you measuring Depth of Focus?

When I’ve tested the GFX cameras and lenses, I’ve not had access to what’s going on in the image field at all, but have figured that out from looking at captured images and paying attention to the object field. So, to the degree that I have been directly observing something, it’s been depth of field, not depth of focus.

However, in my reverse engineering of the GFX’s focus bracketing feature I have observed (ignoring and pupil magnification differences) that a step size of 1 means the camera will move the sensor 2 micrometers (um) times the f-stop in each step. THis is independent of lens focal length or focussed distance.

The other reason is that this way I can talk about the behavior of the lenses in a manner that does not depend on a particular focused distance.