In a previous post, I described how I had created a Matlab program to analyze sets of reflectance spectra, generate basis functions, and then use those basis functions to produce metamer sets, all with an arbitrary fixed color. For review, here is the methodology I used:

I set up my camera simulator to allow training on any patch set in my growing collection, and testing against any patch set that I have, using a compromise matrix optimized during the training phase for any camera for which I have a set of spectral response curves. I made the testing set metamers of a color that I chose for the simulation run. So, although there were hundreds of spectra in the testing set, they all resolved to a single color for the 2012 two-degree standard observer (not the 1931 SO). 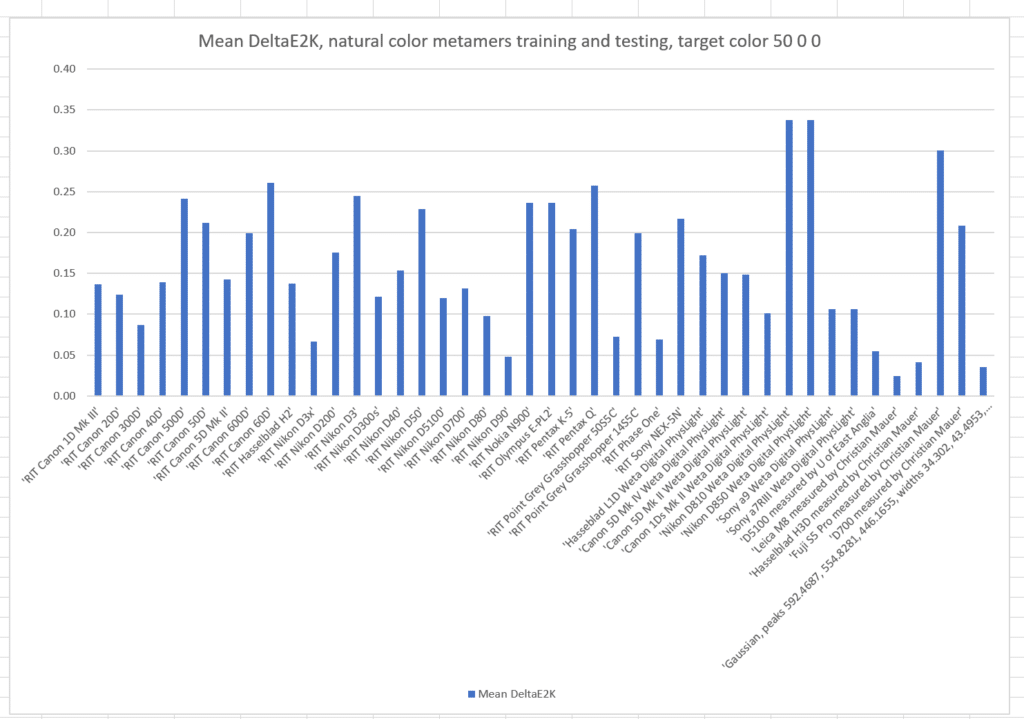 The names of the cameras are across the bottom of the graph. The vertical axis is the mean color error in CIE DeltaE 2000. Take special note of the camera on the far right. It’s not a real camera, but one that I created using optimal Gaussian sensor sensitivity functions(SSFs). In the past, it has produced more accurate results in the simulations than any real camera for which I have the SSFs.

Here are the standard deviations (sigmas) of the colors produced by the cameras: 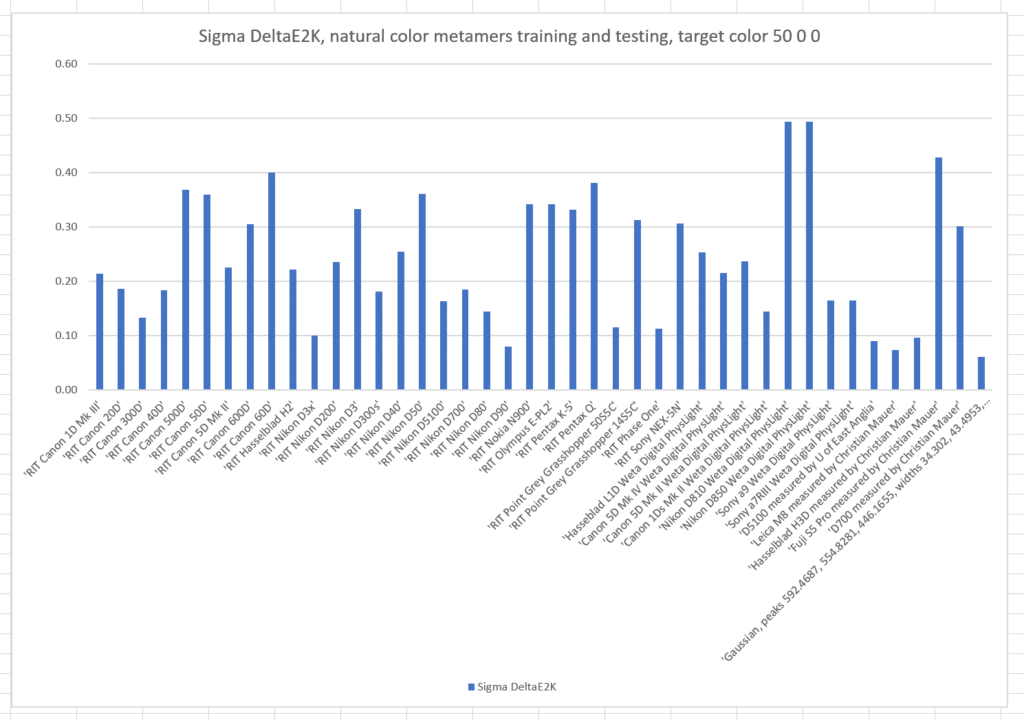 And the worst-case results: 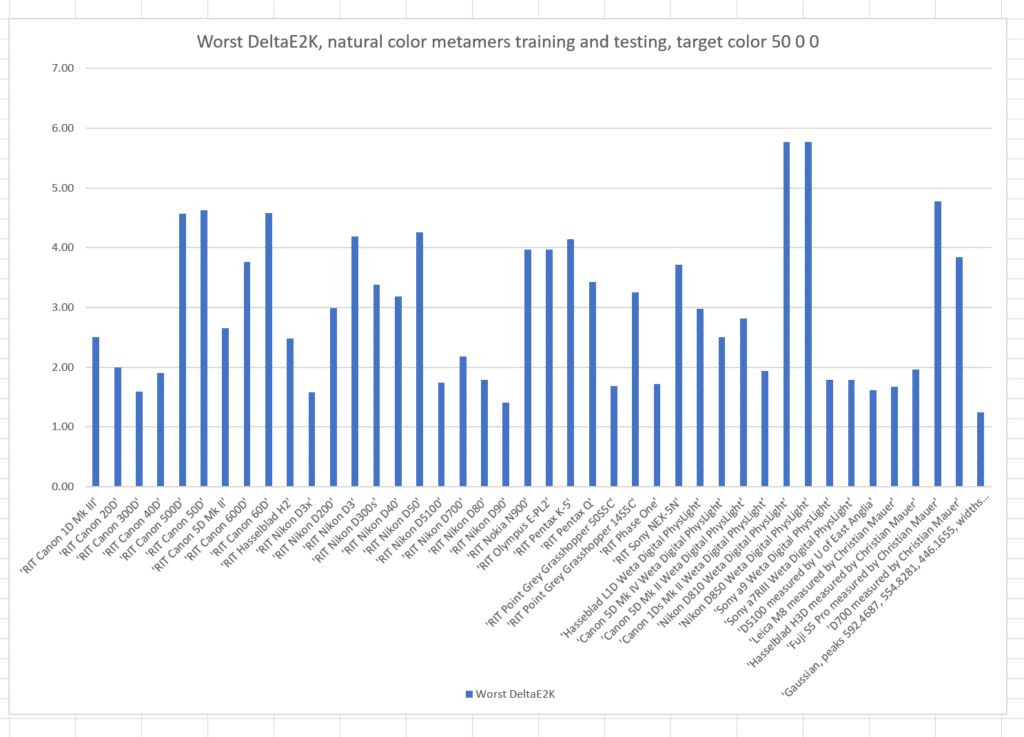 Note by how much the worst results are worse than the standard deviations. This distribution has a long tail.

Now I’ll plot the sigmas against the means for all the cameras; 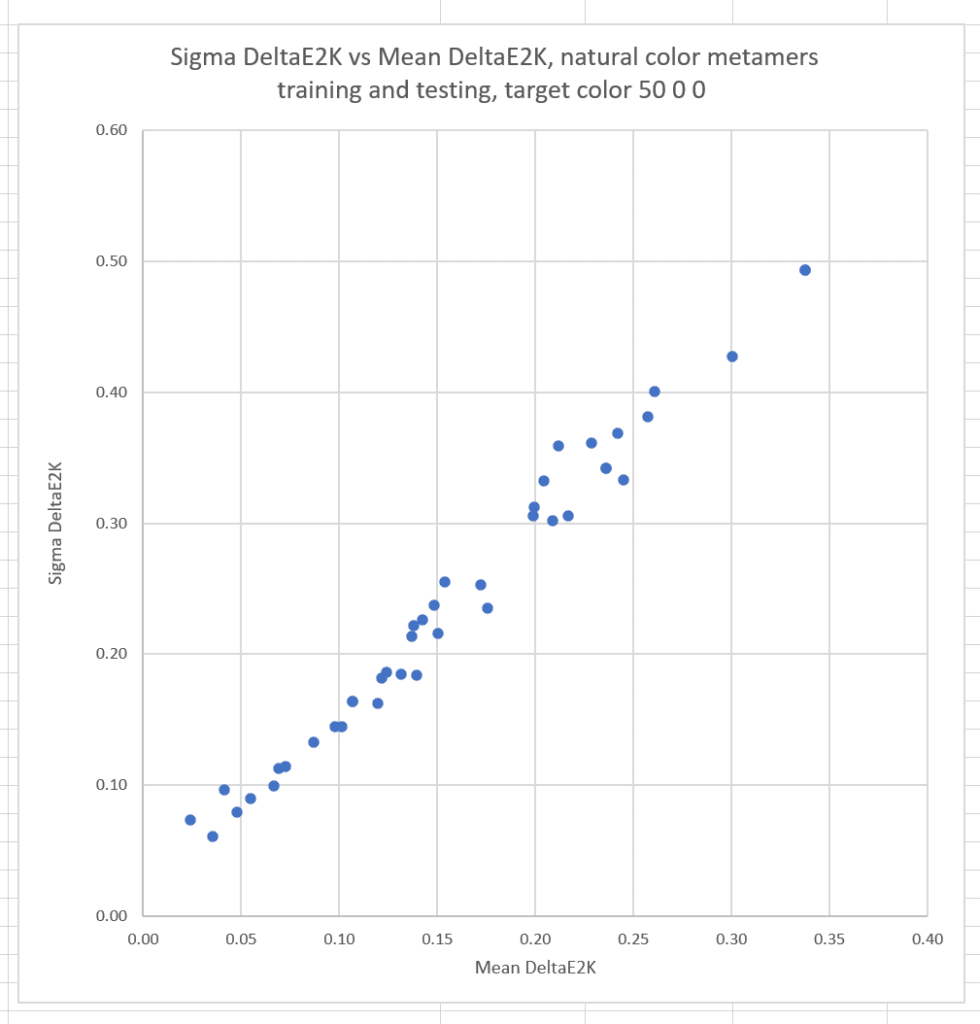 The conclusion is that the more accurate a camera is, the less likely it is to suffer from significant observer metameric error.

That was a pretty restrictive training set. What if we train with the natural colors from which the basis functions were generated, and test with the same metamer set? 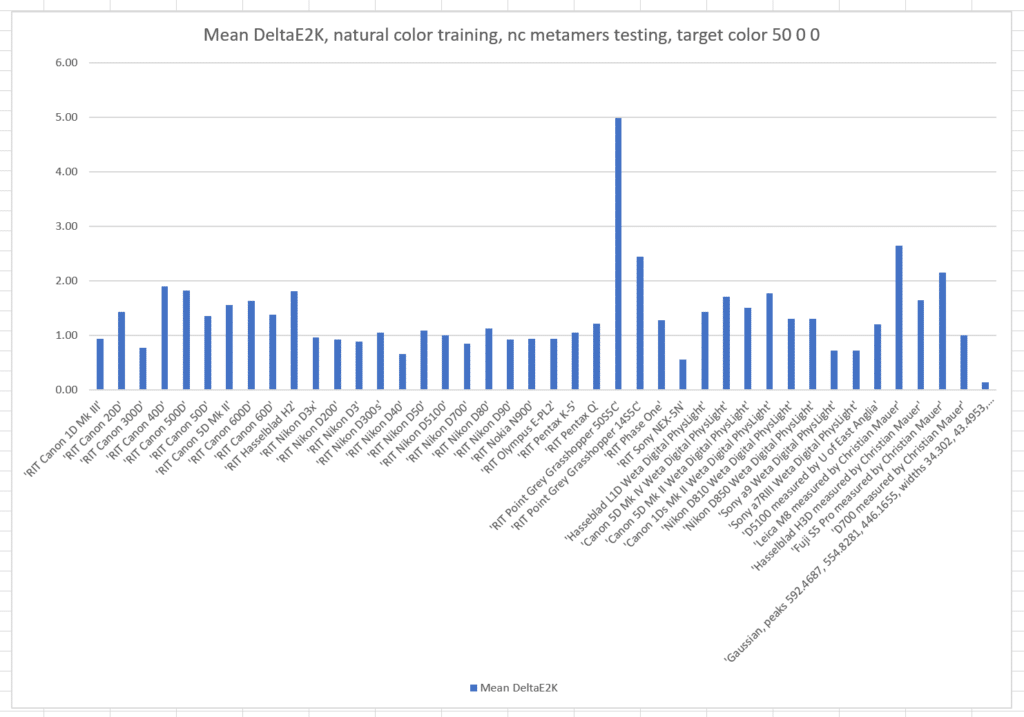 The mean errors are much worse. The optimized camera is clearly best. 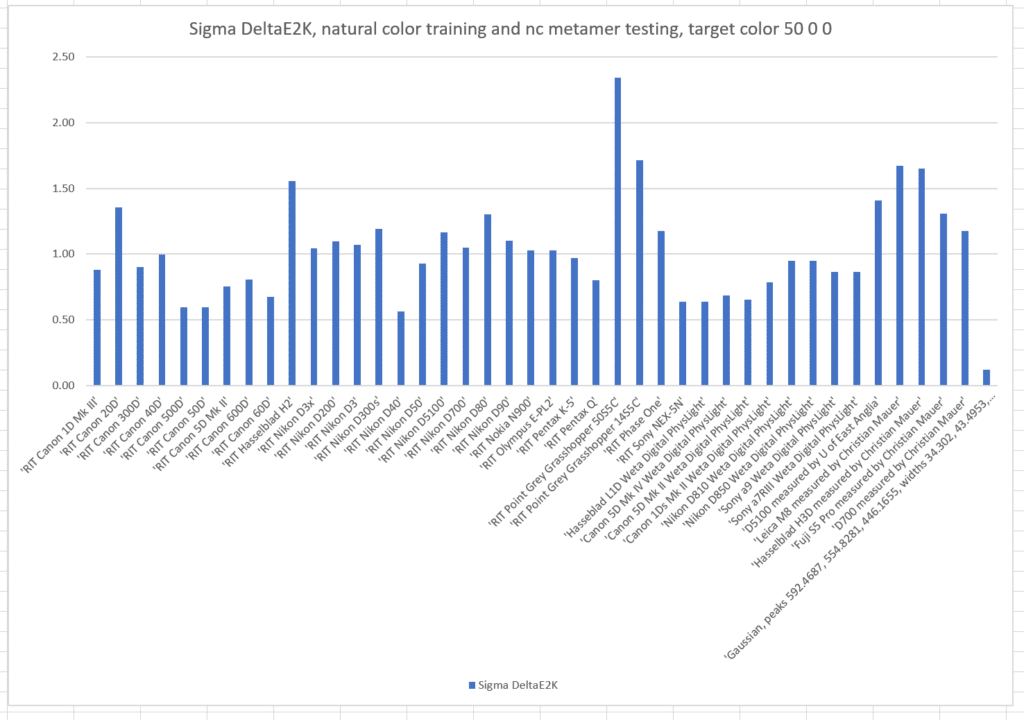 The sigmas are also much worse. The optimized camera is clearly best. 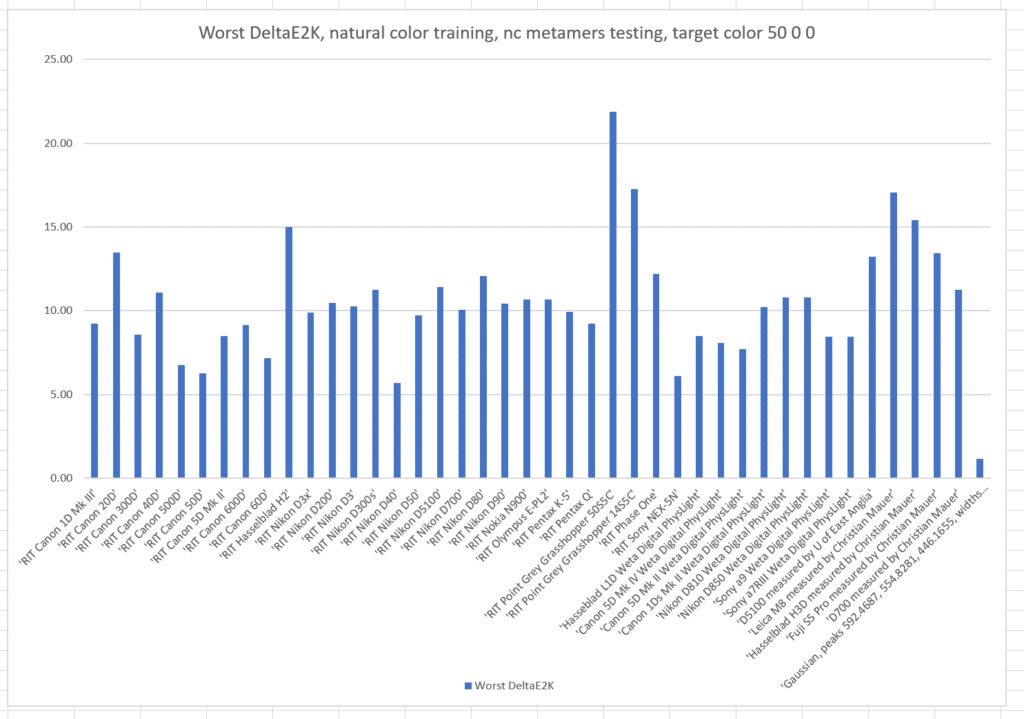 The worst case errors are also worse. The optimized camera is clearly best. 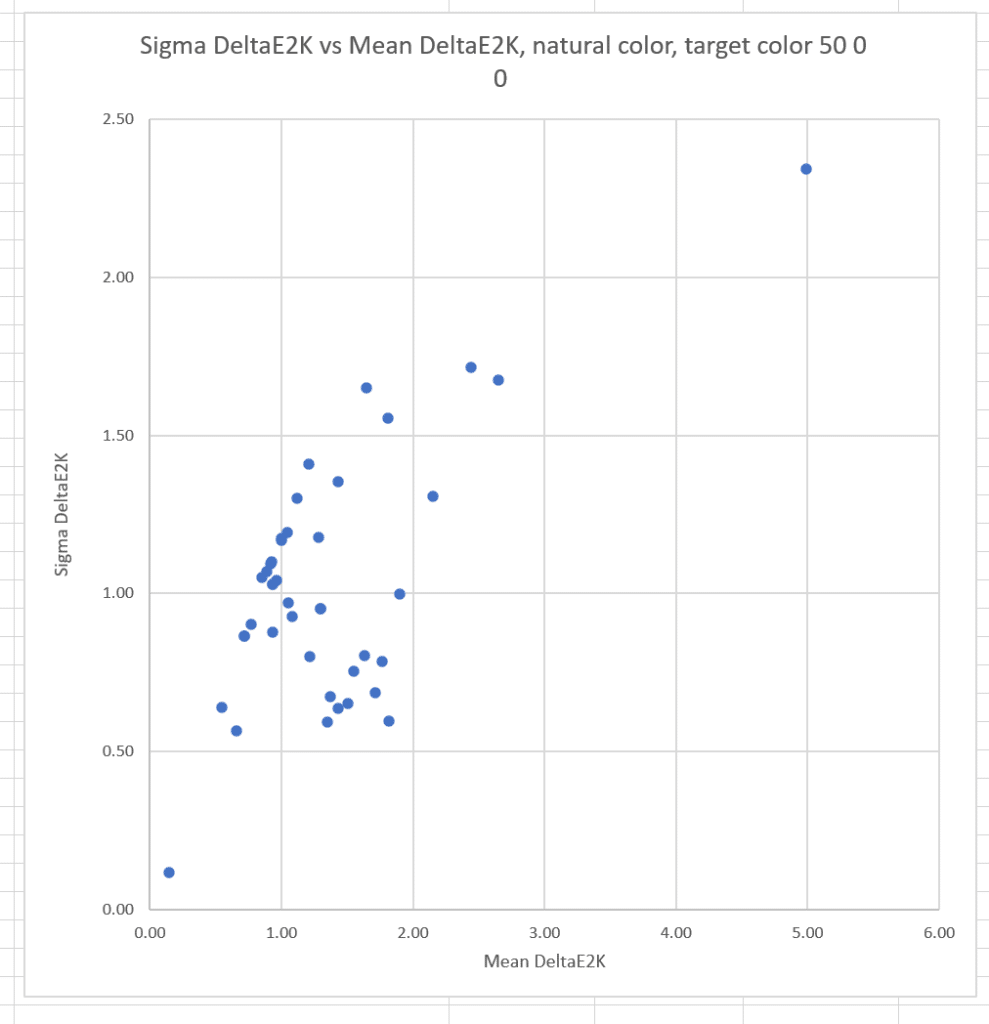 The correlation between the mean errors and the sigmas is reduced, but still strong.

If we train with the Macbetth ColorChecker 24: 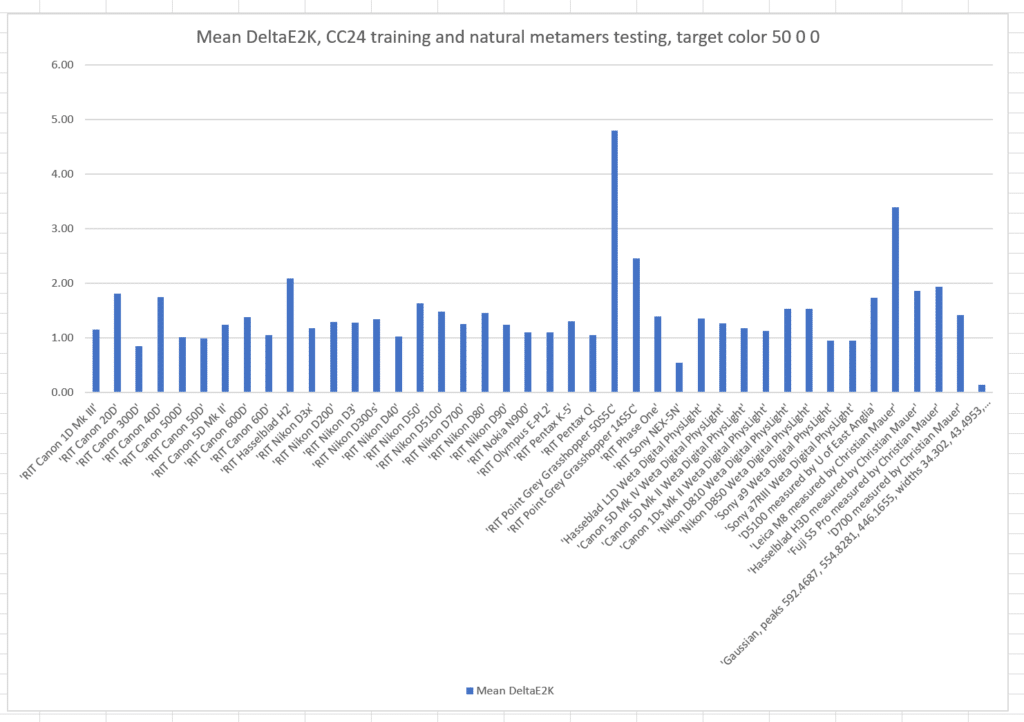 The mean errors are somewhat worse than when we trained with the natural color set. 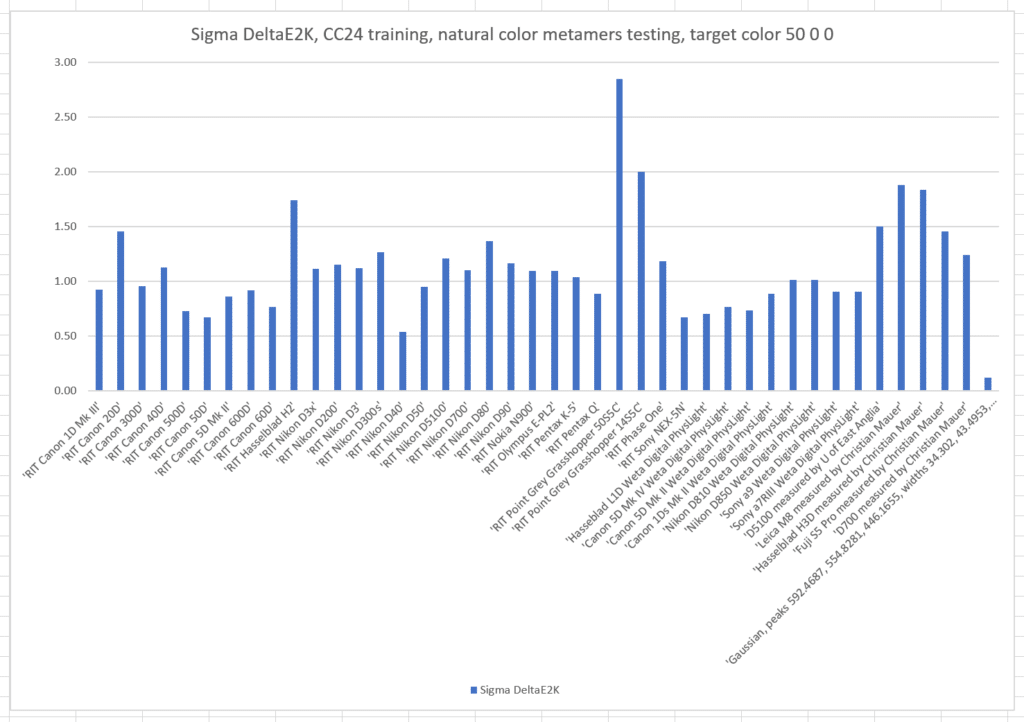 The sigma errors are slightly worse than when we trained with the natural color set. 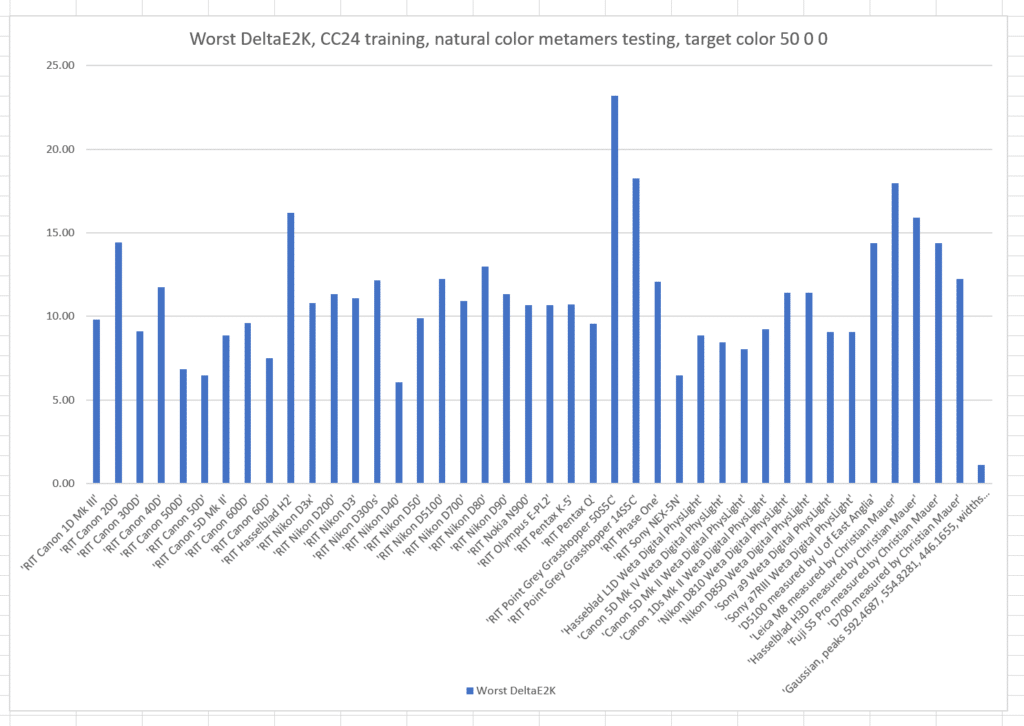 The worst-case errors are slightly worse than when we trained with the natural color set. 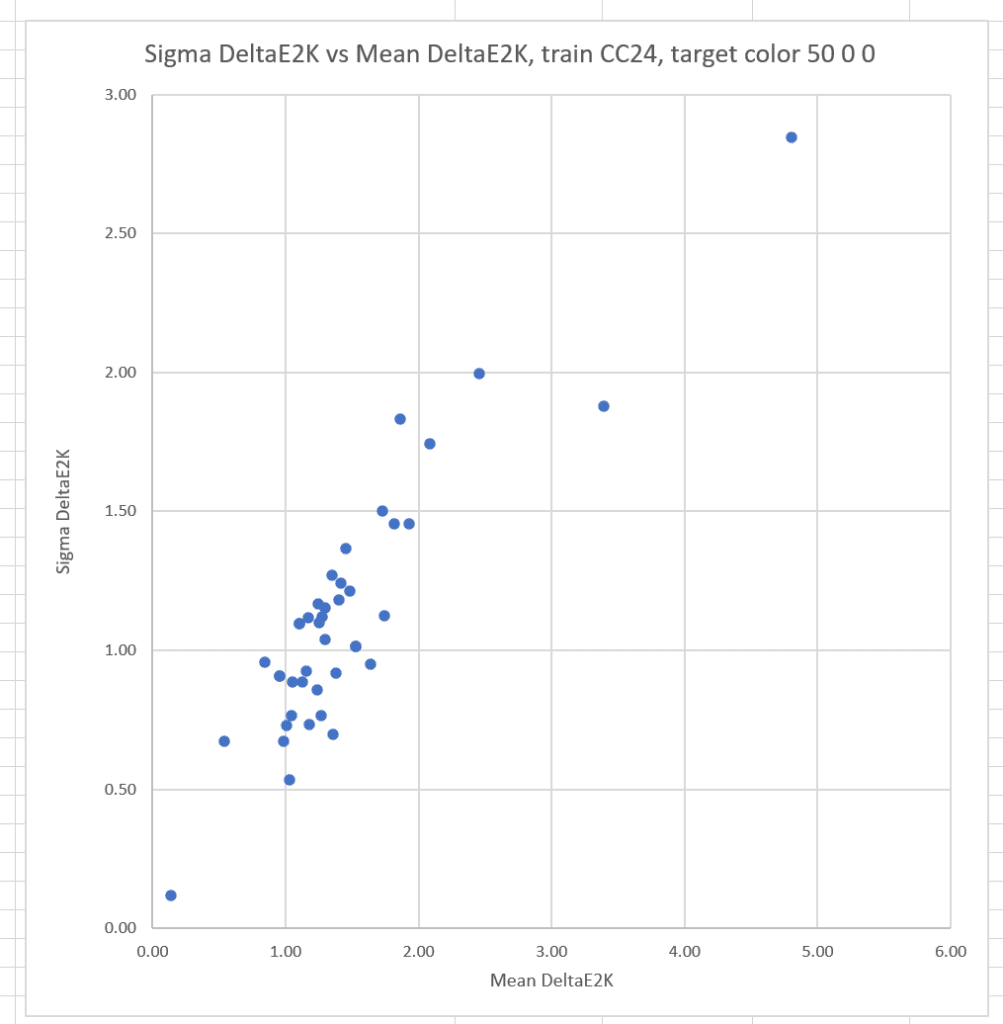 There is still a strong correlation between the means and sigmas. 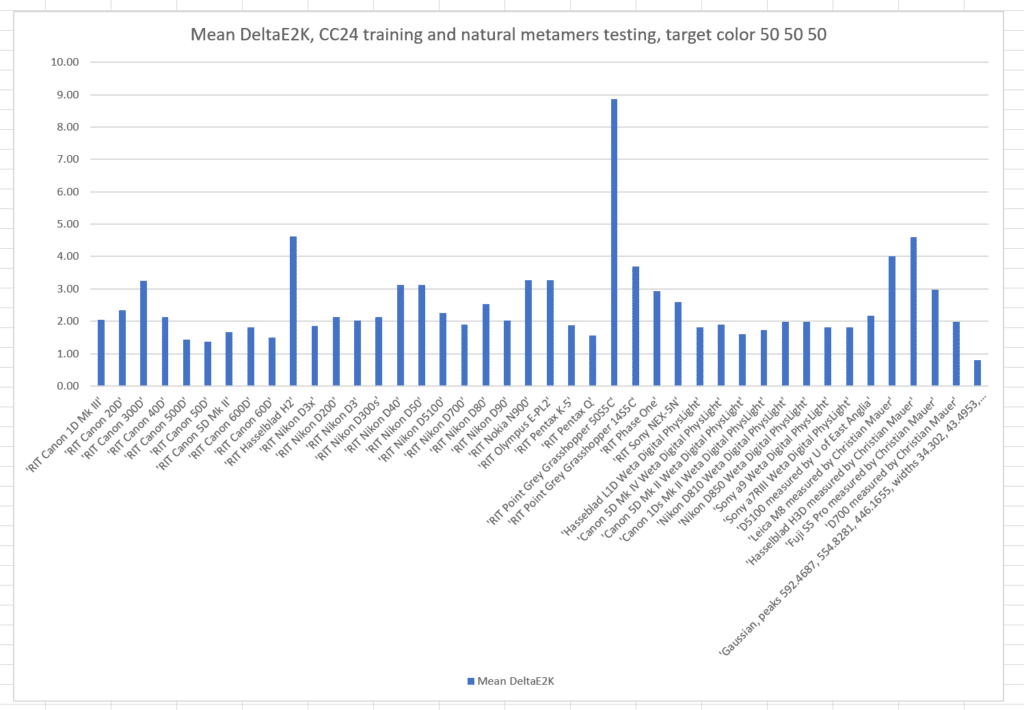 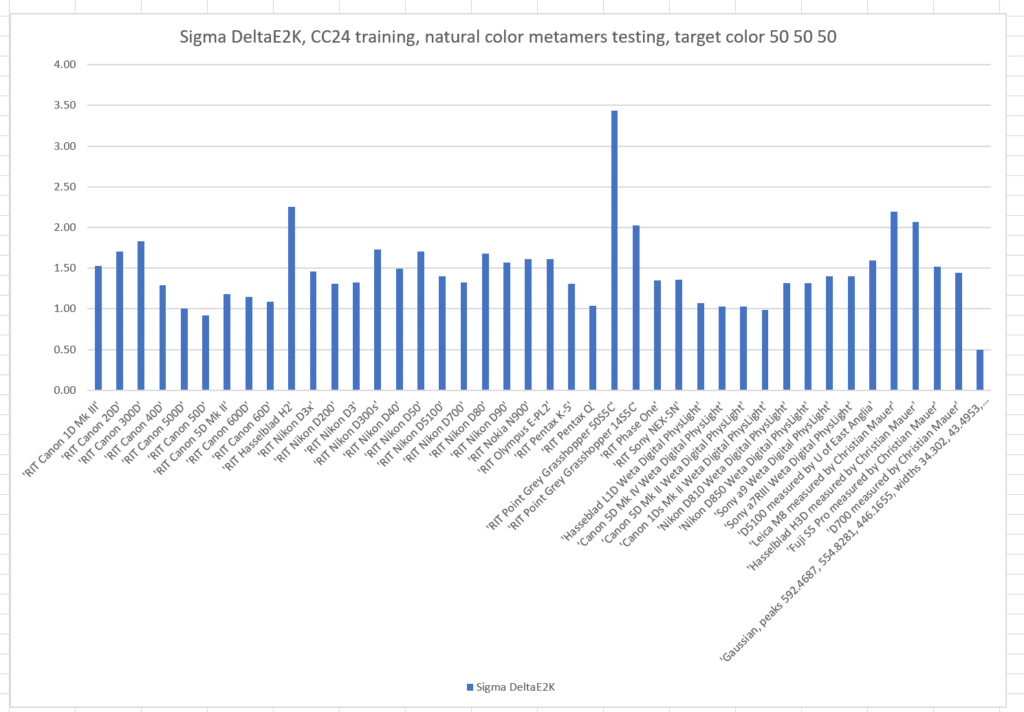 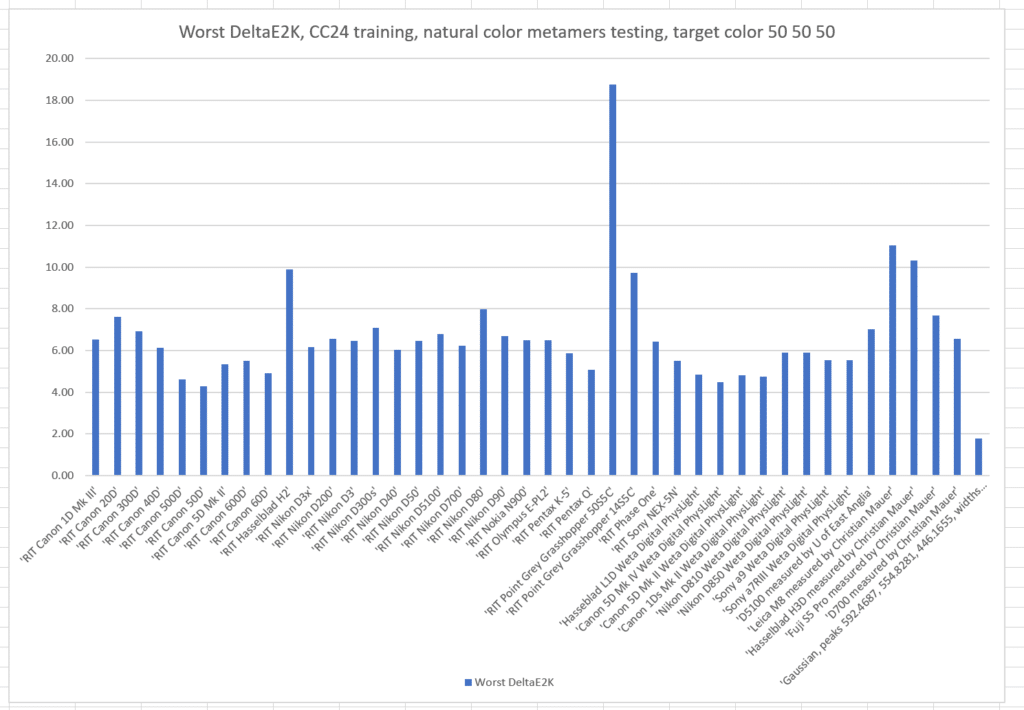 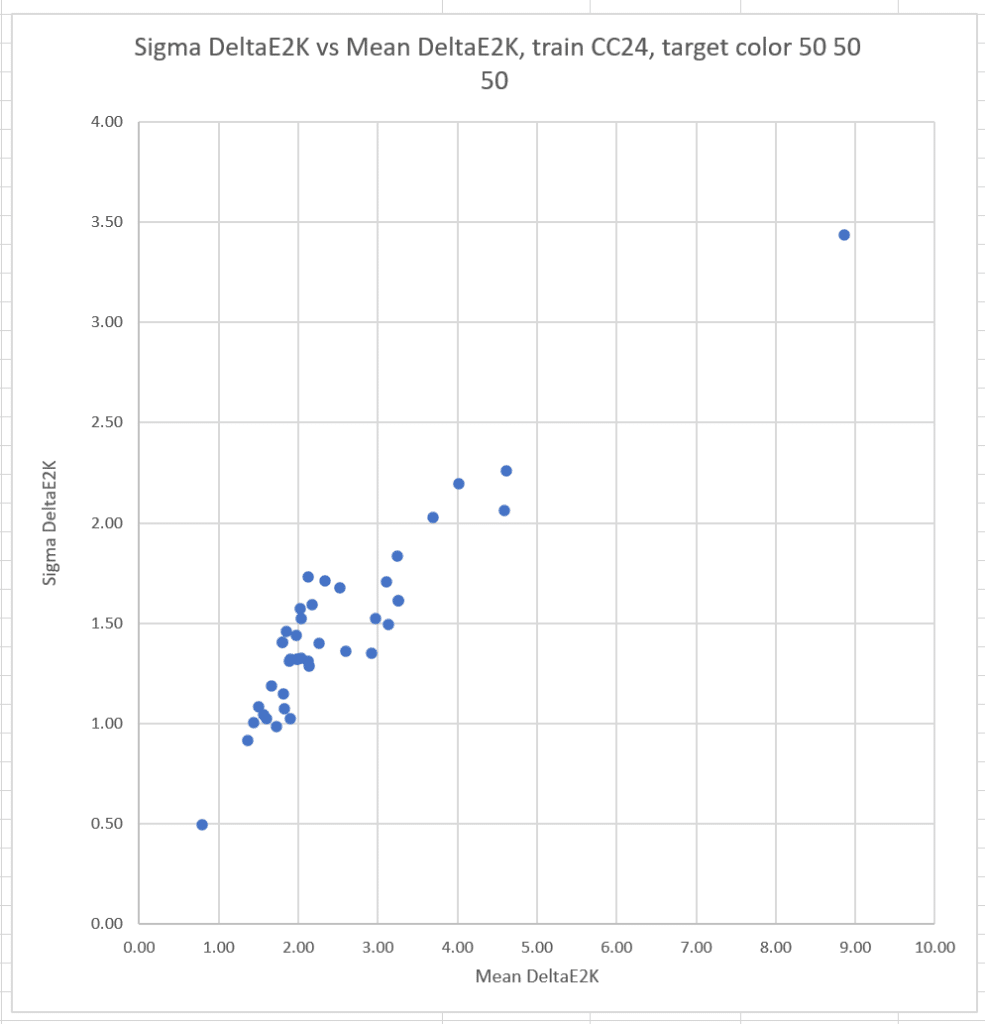 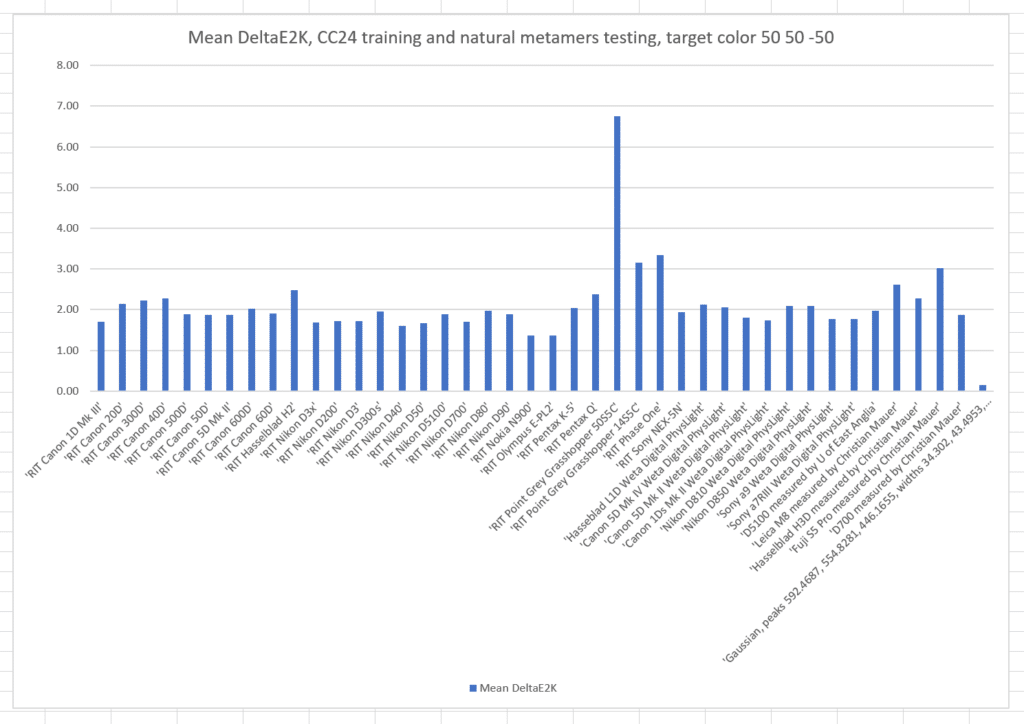 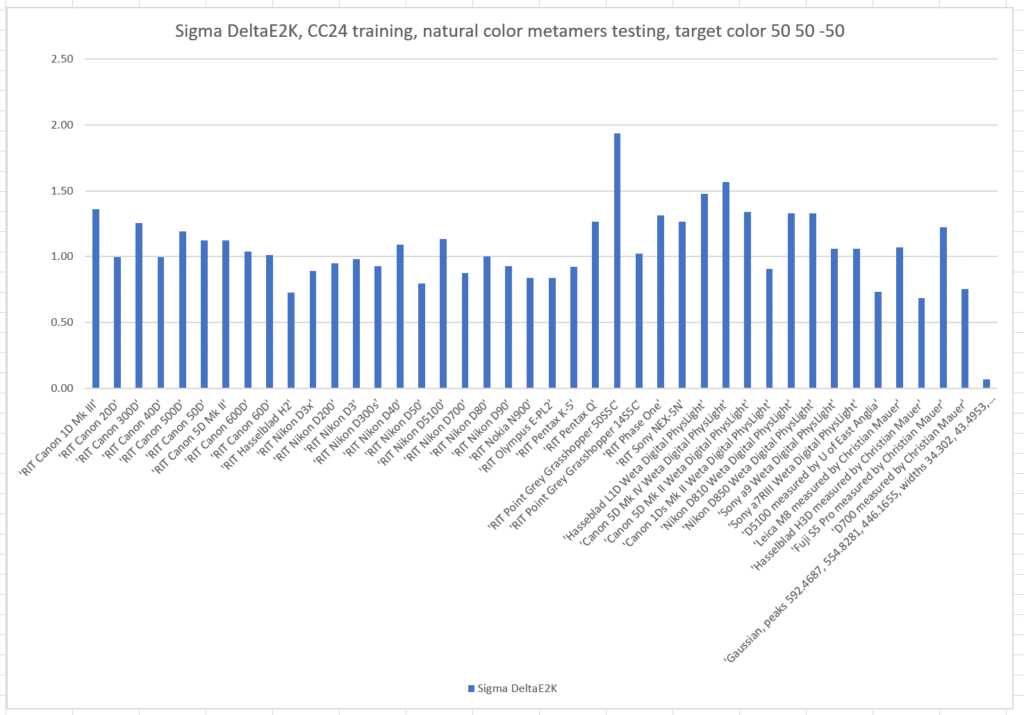 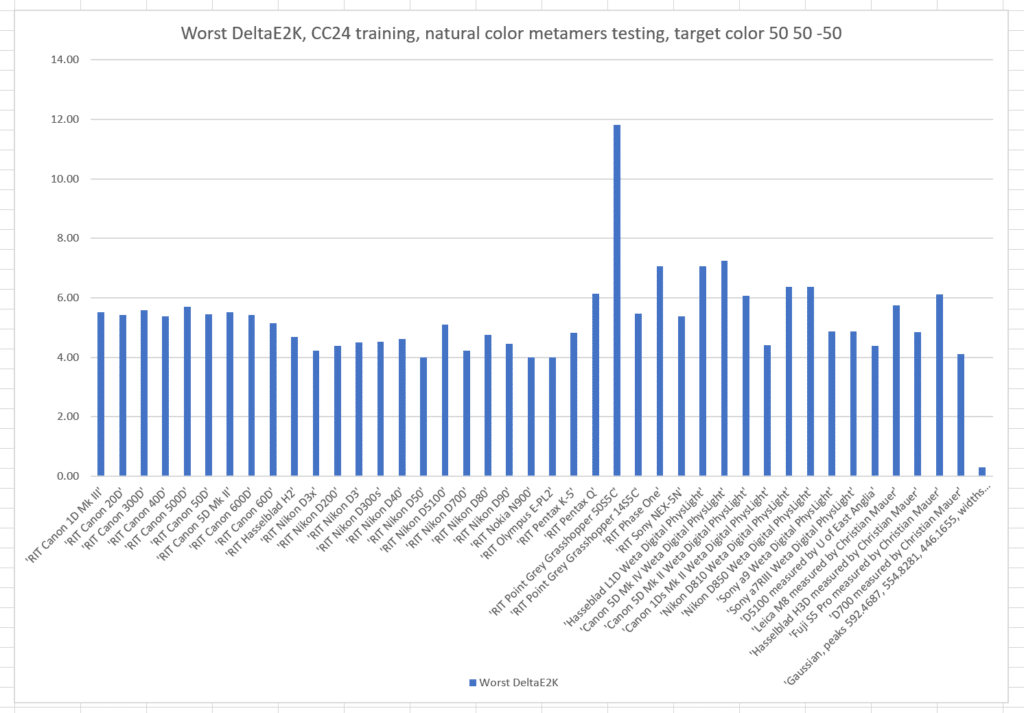 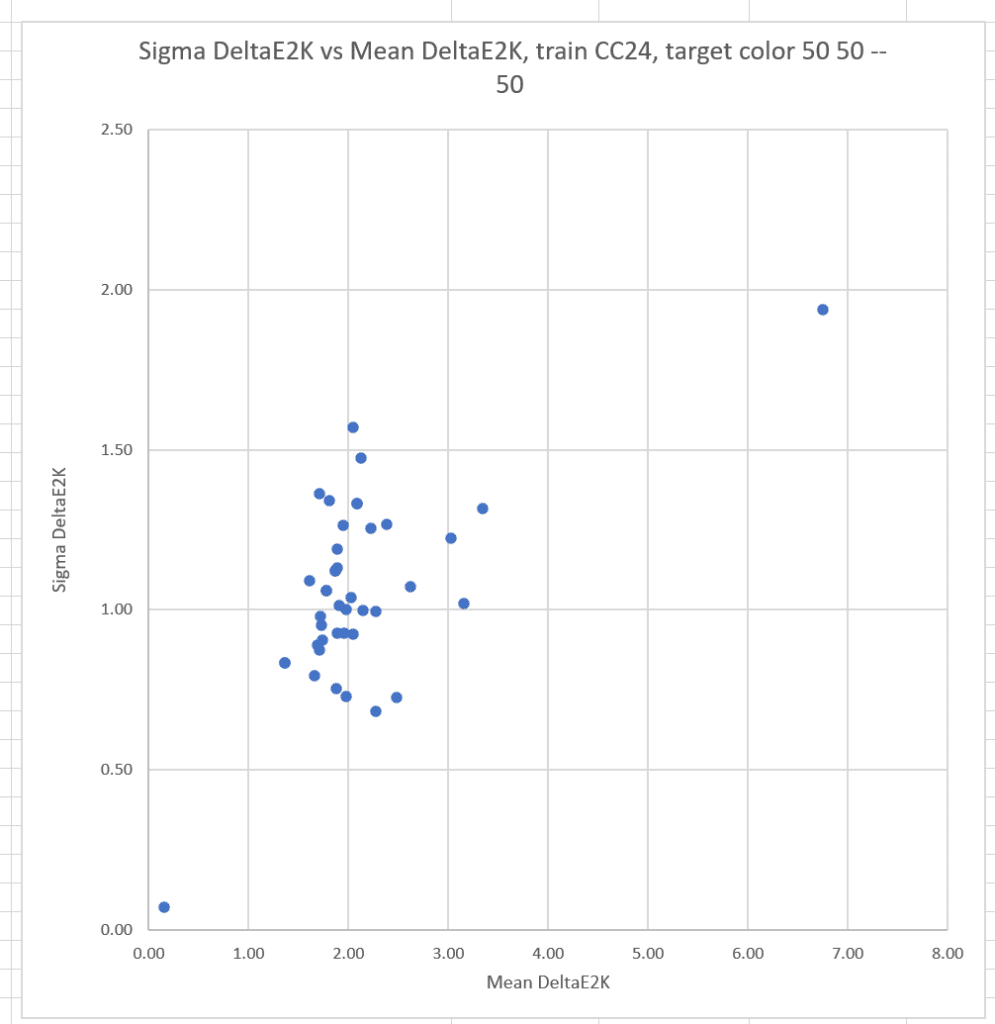 I’ll be doing some more work with this, but my initial, tentative conclusions are:

Training on something close to the testing set helps both mean errors and observer metameric error. (Also not a surprise)

Training on the CC24 isn’t all that much worse than training on the set from which the basis functions were generated. (That is somewhat of a surprise)