On DPR, someone posted some anecdotal photographs that suggested that with long lenses, shutter shock on the GFX 100 was lower _ I almost said significantly lower, but then again it was an uncontrolled, low-N test so it’s hard to ascribe significance. I realized that I hadn’t done much at all with shutter shock on the GFX 100xs cameras, figuring, as is the case with the GFX 50S, that electronic first curtain shutter  (EFCS, or, in Fuji’s notation, EF) pretty much made shutter shock not worthy worrying about.

I decided to construct a close-to-worst-case test. I took the following gear:

And set it up in portrait orientation, which is the worst case for the GFX shutter, which travels in the short direction. 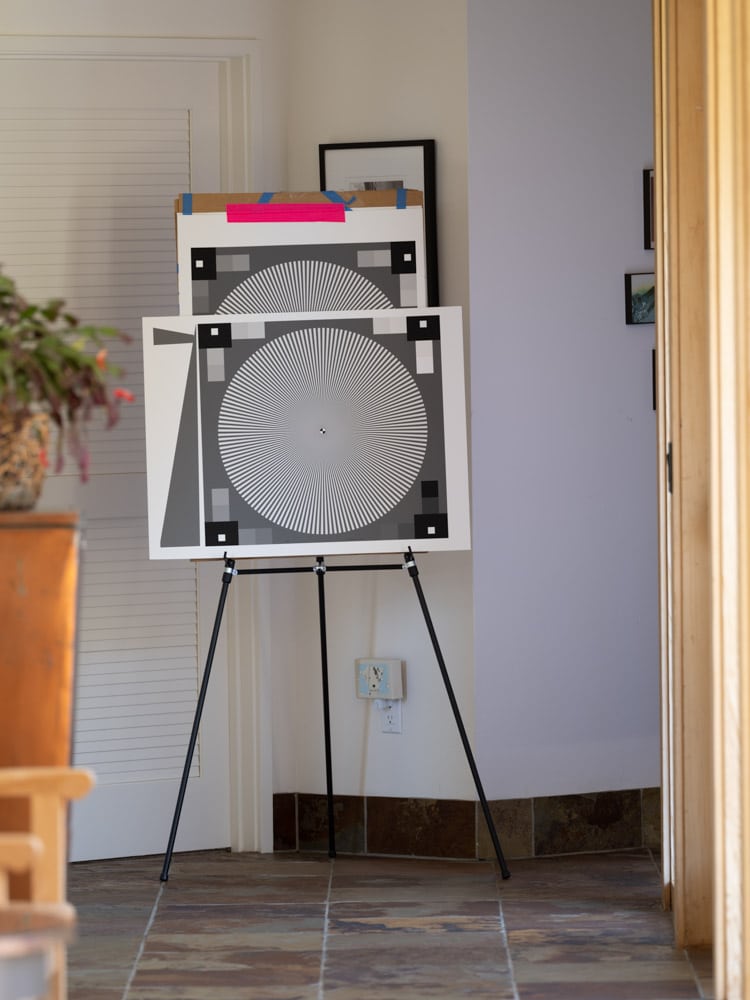 My indicator of sharpness is the vertical slanted edge on the left. Using an edge that runs parallel to the long side of the sensor is again  a worst-case situation. If focus error with AF-S is smaller than the shutter shock variations that we’re looking for, using AF to focus each frame would be the way to go here, to avoid any change of the infamous Fuji GFX focus drift issue. I ran a test. focus variation with AF-S was far greater than the kinds of differences I expected to see between the electronic shutter (ES) and EFCS.

Darn. I need to use manual focusing. I focused once at the beginning of the series.

I decided to shoot 16 shots in each of ES, EFCS, and mechanical shutter, with the lens wide open, giving my f/5.6. I did the EFCS series first, with the shutter actuations 2 seconds apart. I picked a shutter speed of 1/30 second, which is close to the worst case for this kind of test,

I developed the images as follows:

I analysed the slanted edge with Imatest, looking for the MTF50. 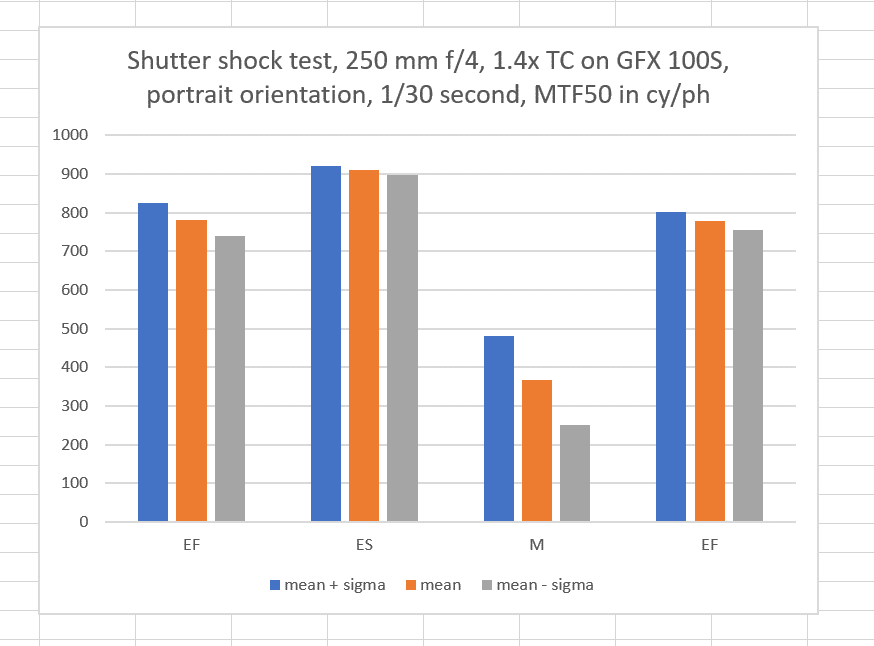 Why are there two EF (or EFCS) datasets. That’s my way of checking for focus drift. The order of testing was EF, ES, M, and EF again at the end. YOu can see that the EF bookends provide essentially the same results, which indicates to me that there was no material focus drift. 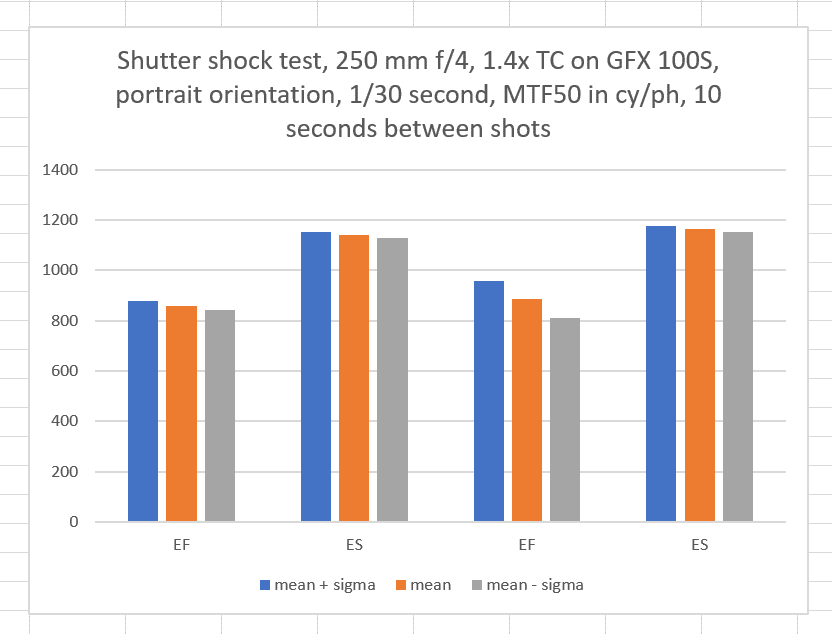 It looks like the improvement in ES is real, and not just from leftover vibrations from earlier shots.

We can look at some of the individual MTF curves. to get an assessment of the 250/4 wit a 1.4x TC. This is the sharpest shot in the first ES series with the 10-second delay: 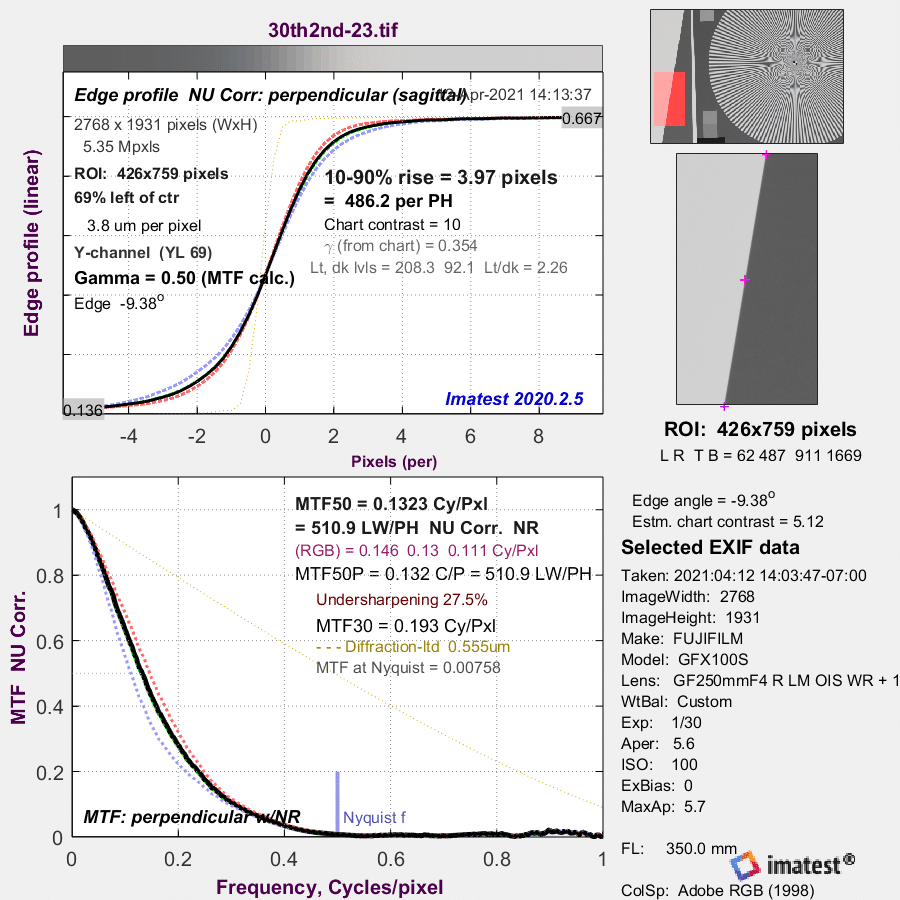 This is not a super-sharp combination, but then again, what lens really shines with a TC?

We can also look at chromatic aberration: 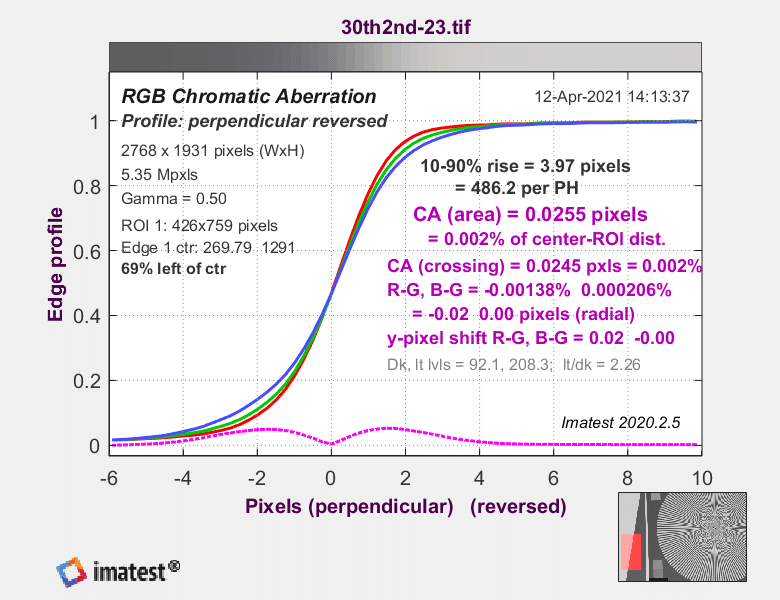