This is the sixth in a series of posts on the Nikon Z50. You should be able to find all the posts about that camera in the Category List on the right sidebar, below the Articles widget. There’s a drop-down menu there that you can use to get to all the posts in this series; just look for “Z50”.

Quite an alphabet soup in the title, huh? This afternoon, I ran a photon transfer curve (PTC) for the Z50, which allows me to calculate the input-referred read noise (RN) in electrons, the full well capacity (FWC), and the photographic dynamic range. Not that it matters, but I used a CV 125 mm f/2.5 Macro-Apo-Lanthar with the FTZ adapter for this job. The legendary sharpness of the lens didn’t matter much, since I defocused heavily.

First up, a set of normalized photon transfer curves: 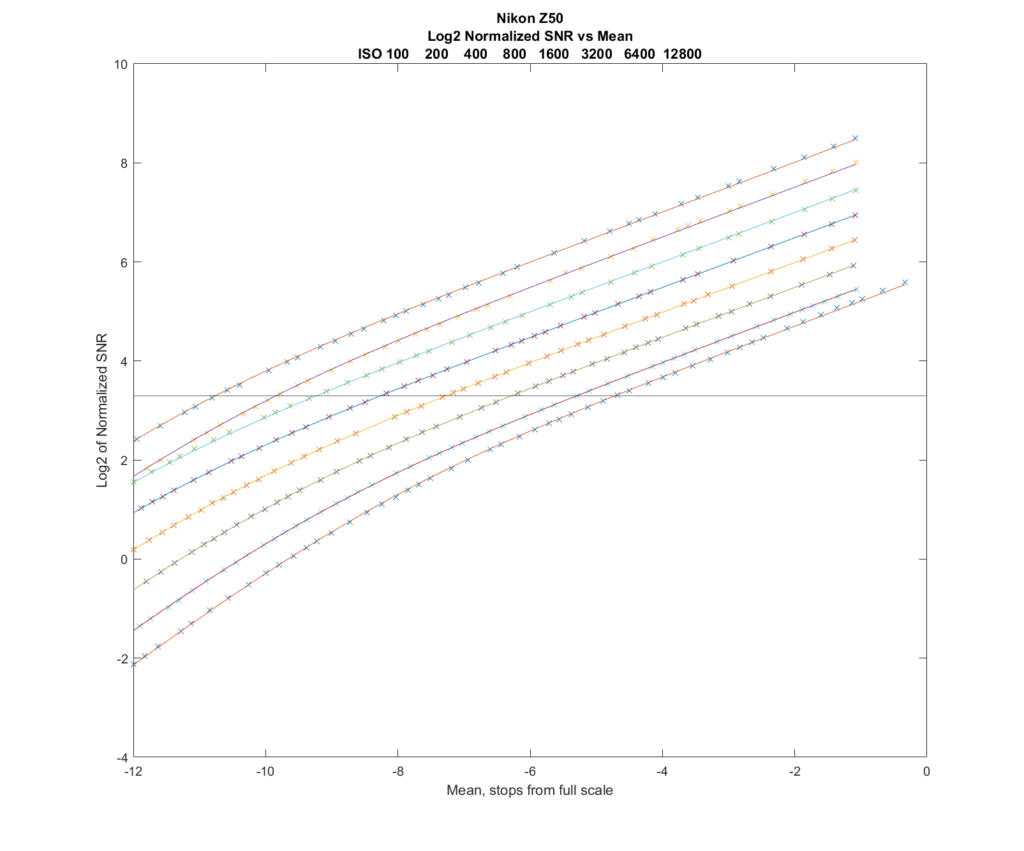 The mean signal level, in stops from full scale, is the x-axis. The y-axis is the signal to noise ratio, normalized to an 8-inch print viewed from 18 inches away using the same methodology that Bill Claff uses for his PDR measurements. The top curve is from ISO 100, the next for ISO 200, and so on. The measured data points are the crosses, and the modeled approximation is the solid lines. There is excellent agreement. Don’t worry about the solid black horizontal line for now; we;ll get to that at the end of the post.

There are two interesting things about the curve set. The first is the high shadow SNR at ISO 400. The Z50 changes to higher conversion gain at that ISO, which makes the read noise drop, and that makes the shadows less noisy. The second is the closeness of the bottom curve to the one immediately above it. That occurs because Nikon performs some noise reduction using digital signal processing at that ISO setting.

The modeler program that I wrote tell me what the full well capacity it found for each ISO setting and each raw plane. Here’s what that looks like: 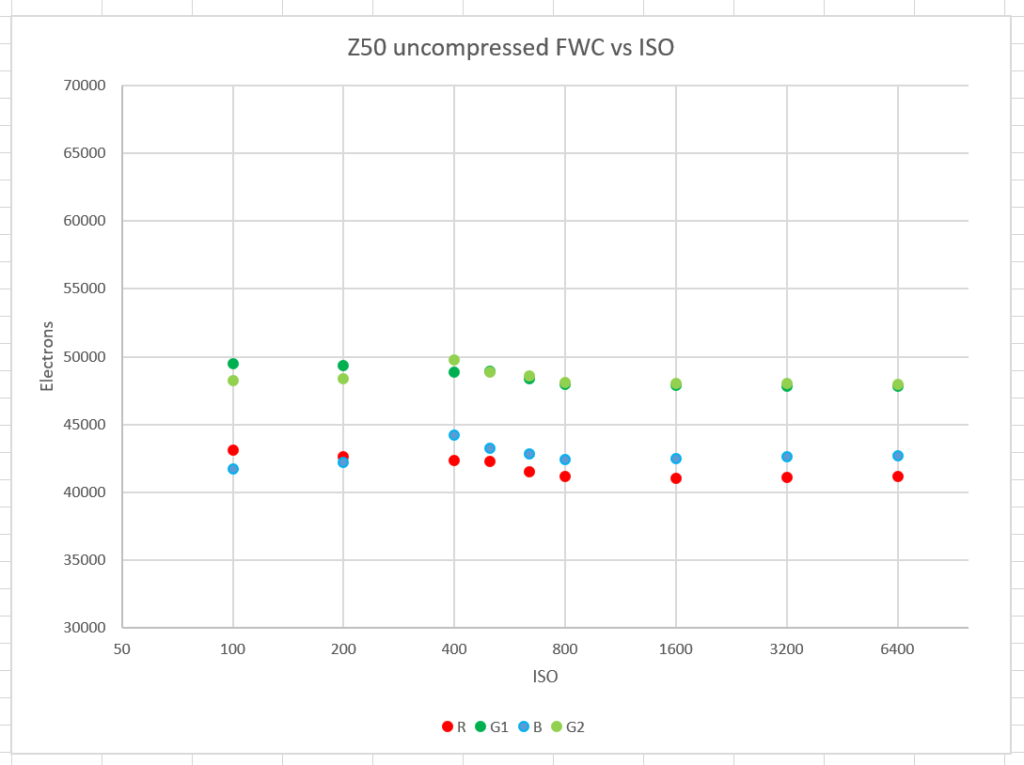 In a perfect world, all the FWCs would be the same. Here they come very close to that, for each channel considered separately. However, the red and blue channels are lower than the others. That’s due to the Nikon white balance prescaling, which confuses the software that I wrote. I have a way to calibrate out the effect, but I didn’t use it on this data set, because it requires that I figure out the gain settings for my particular serial number. Just think of the red and blue FWCs as too low, and the FWC of the camera as about 48,000 electrons.

Knowing the FWC, I can calculate the input referred read noise: 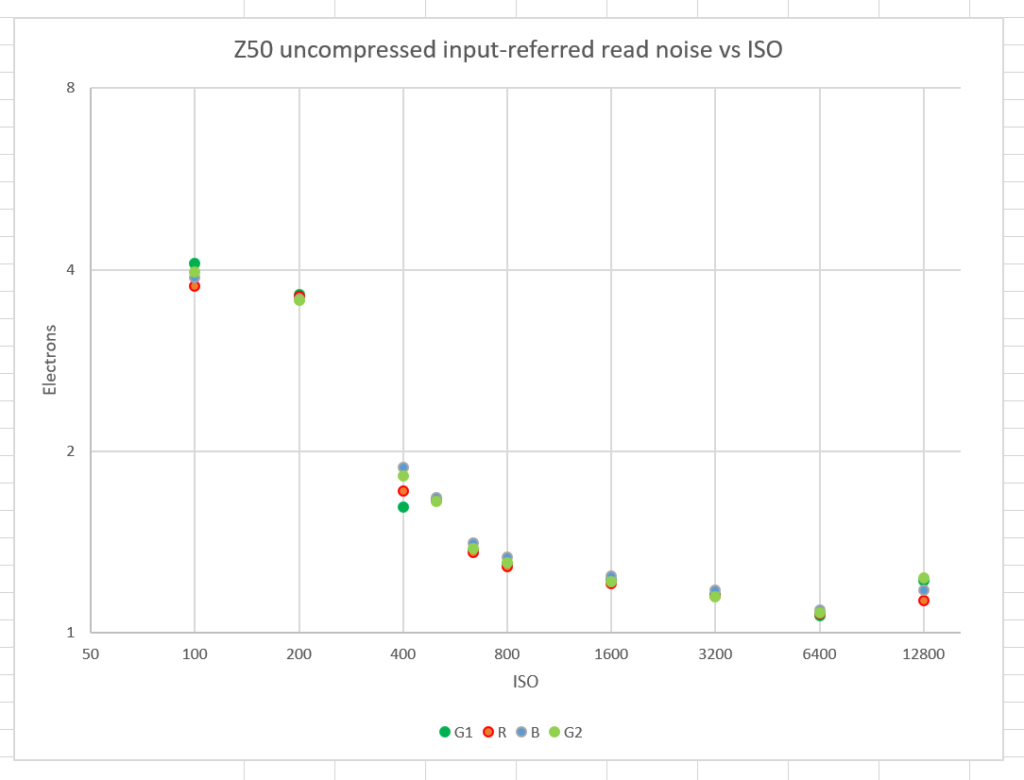 The jump downwards at ISO 400 is because of the increased conversion gain at that ISO. RN at high ISOs is approaching 1 electron, which is about the state of the consumer camera art these days.

To show you the photographic dynamic range, I’ll change the axes of the top curve in this post: 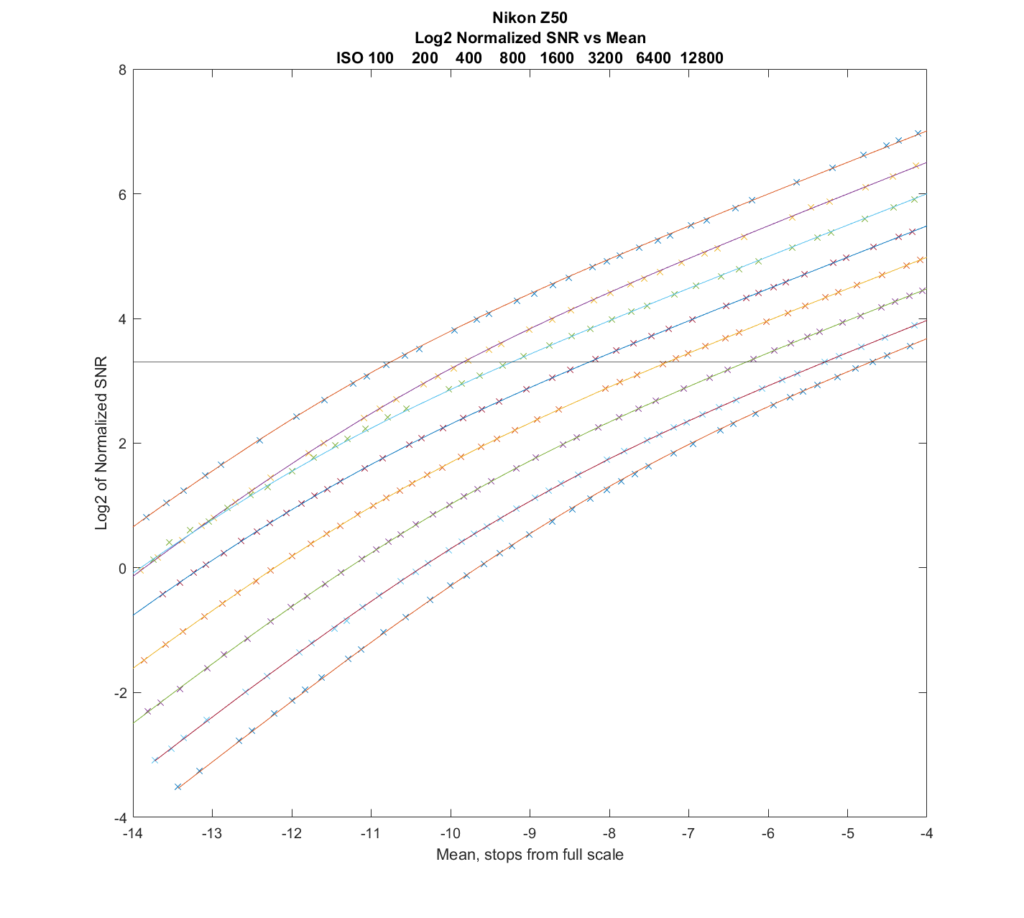 This shows the shadow signal to noise ratio as a function of ISO setting and mean signal level. The Claff PDF threshold is plotted as the black horizontal line. You can see that the PDR at base ISO is a bit over 11 stops.

This is a fine example of a typical CMOS sensor in today’s cameras. It looks like there were no compromises in IQ when this sensor was designed, even though it is used in an inexpensive camera.