In the last few posts, I’ve been comparing measurements of laboratory-made images using the Fuji 110 mm f/2 lens on both the GFX 100 and GFX 50S bodies. We’ve found that, with that lens at f/4, the GFX 50S is at least as sharp as the GFX 100, if slanted edge modulation transfer functions are the metric of sharpness. Note that MTF curves don’t measure how finely the image is sampled, but only the characteristics of the pixel aperture. For a comparison that factors in both MTF and sampling density, I turn to a long-suffering photographic subject, seen here with the 110/2 on the GFX 100: 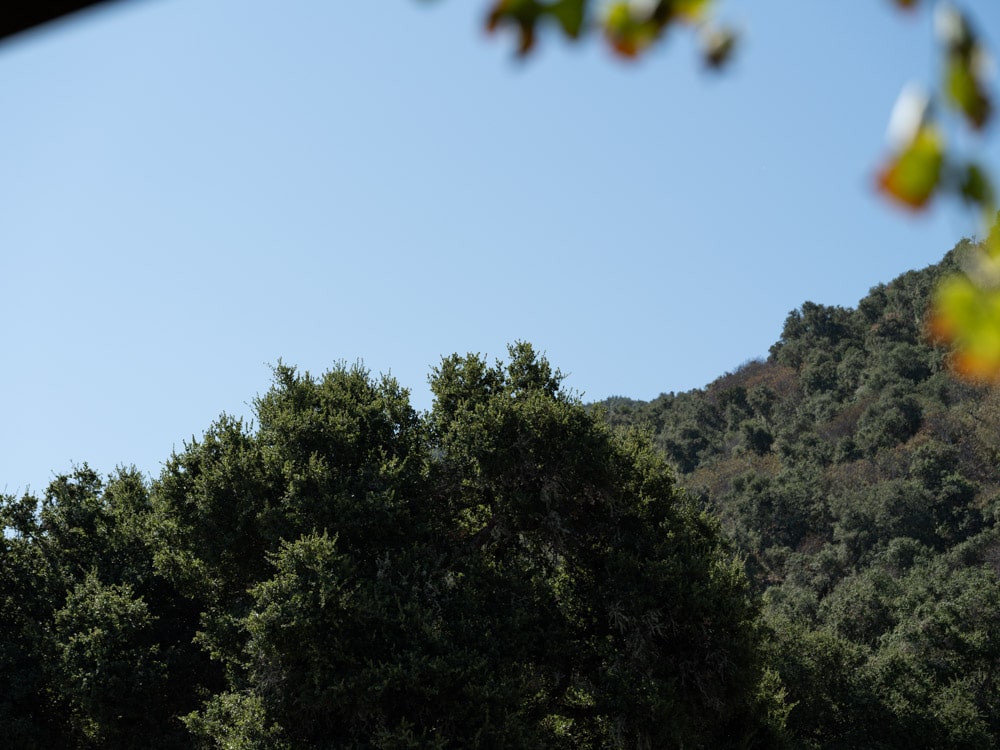 The tree in the middle is a bit over 30 meters away from the camera. I used a pair of heavy RRS carbon-fiber legs, and an Arca Swiss C1 head. With both the GFX 100 and GFX 50R, I set the lens to f/4, stopped it down to taking aperture and focused on the tree, and made an exposure that produced a 14-bit losslessly compressed raw file. I did that a few more times. I brought the images into Lightroom and used the default settings except for the following:

I picked the sharpest image from both cameras, and created some of my usual very tight crops.

Here’s how to use these highly-magnified crops. The dimensions of the GFX 50R sensor is 8256×6192 pixels. If we make a full-frame print from the GFX50 R on a printer with 360 pixels per inch native driver-level resolution, like the Epson inkjet printers, we’ll end up with a 23×17.2 inch print. The 283×219 pixel crop you’re looking at will end up 0.8×0.6 inches.  Let’s imagine that you or your viewers are critical, and will look at the 23×17.2 inch print from about 18 inches (conventional wisdom is that the distance would be a little greater than that, or 29 inches (the diagonal), but you did buy a high-resolution camera for a reason, didn’t you?). The GFX 100 crops are 399×309, so they are blown up a bit less to make the picture height the same.

The next step is dependent on your monitor pitch, which you may or may not know. Turns out, you don’t have to know it. Just take the crops and view then at 1:1. How high are they? Get out your ruler and measure, or just guess. Let’s say they are 6 inches high. 6 inches is about 7 times 0.8, so in order to view the crops the way they’d look from 18 inches on the print is to view them from 7 times as far away, or 10.5 feet.

The color balance is different between the two images. I’ll put that down to Adobe’s support of the GFX 100 currently being preliminary.

The GFX 100 image doesn’t look unequivocally sharper, but it is more detailed and smoother. But there are other systematic differences: