A couple of days ago I tested the Fujifilm 80 mm f/1.7 G-mount lens on the GFX 100S, using a Siemens star target. I presented the results as images, and let you all judge for yourselves. Some people are good at eyeballing images and sussing out what’s going on with the lens. Some like numbers. This post is for the latter group. This is my second test using the Imatest Siemens star analysis tool. I’m still feeling my way to find out what it’s good for. There are some obvious issues with MTF normalization — see the comments to this post — but I mentally assume that the curves top out at about one.

I moved closer to the target for this test, to about 7 meters, so that the star covered about 1800 pixels in each direction. That allows the Imatest software I used to estimate modulation transfer function (MTF) for low spatial frequencies. With the exception of sharpening, the rest of the test conditions were the same as before.

MTF in several directions in the center at f/1.7: 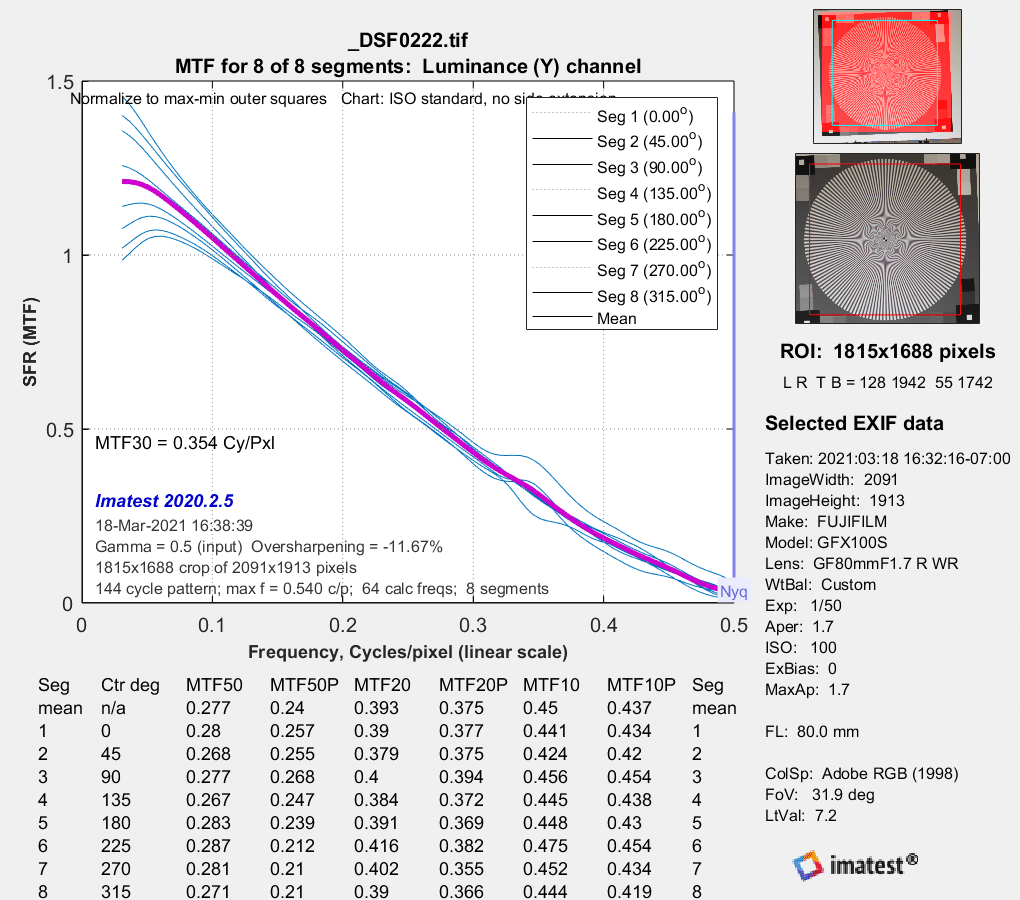 This is very credible performance, showing some contrast right up to the Nyquist frequency. 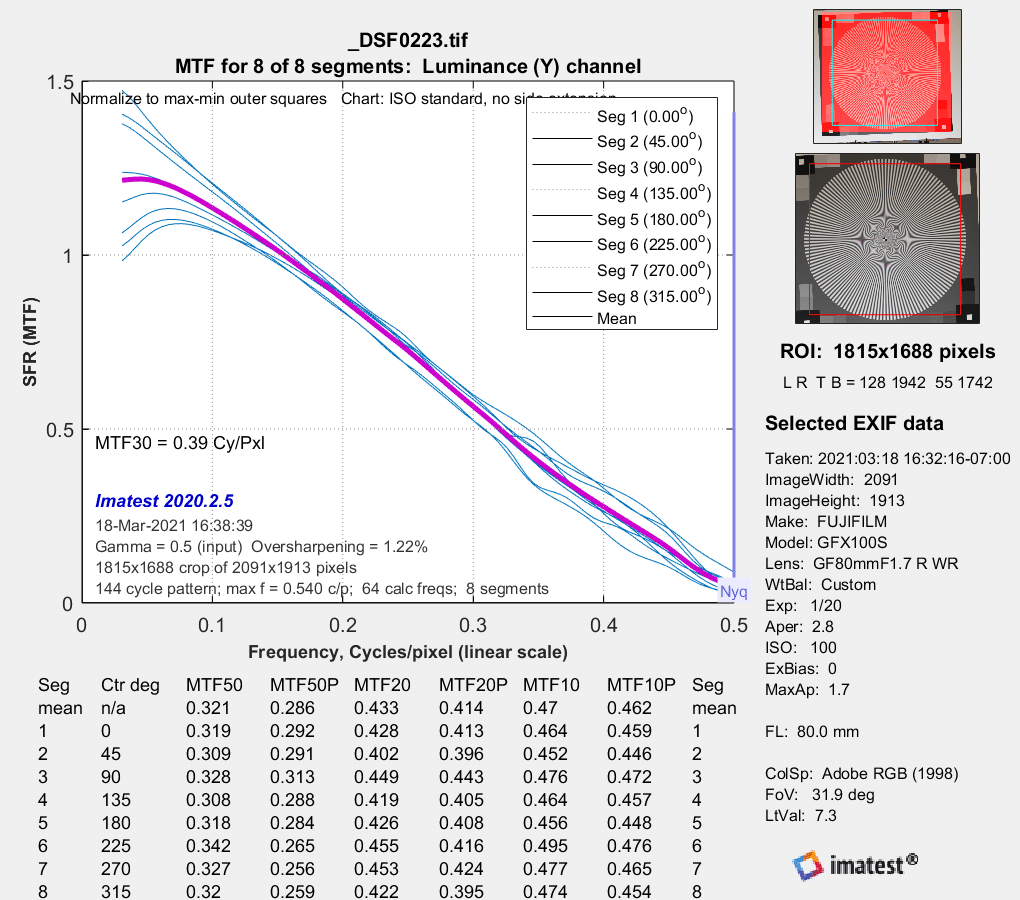 There is modest improvement. 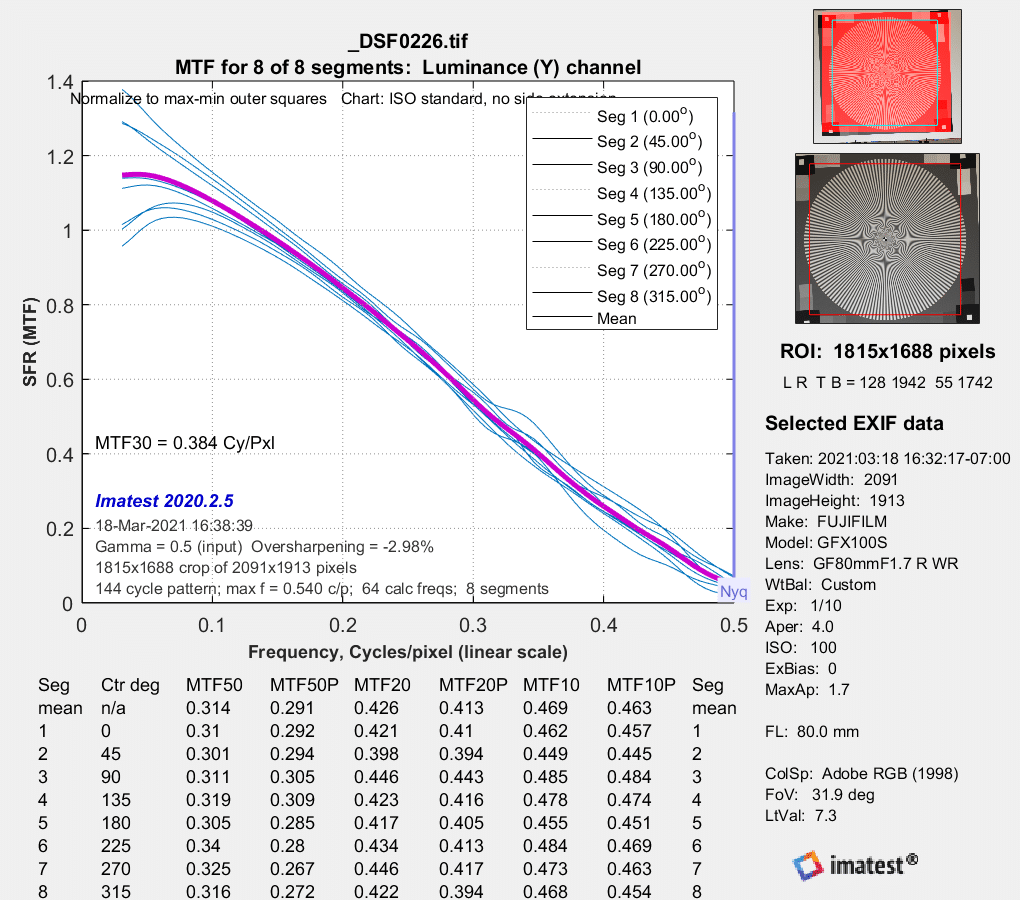 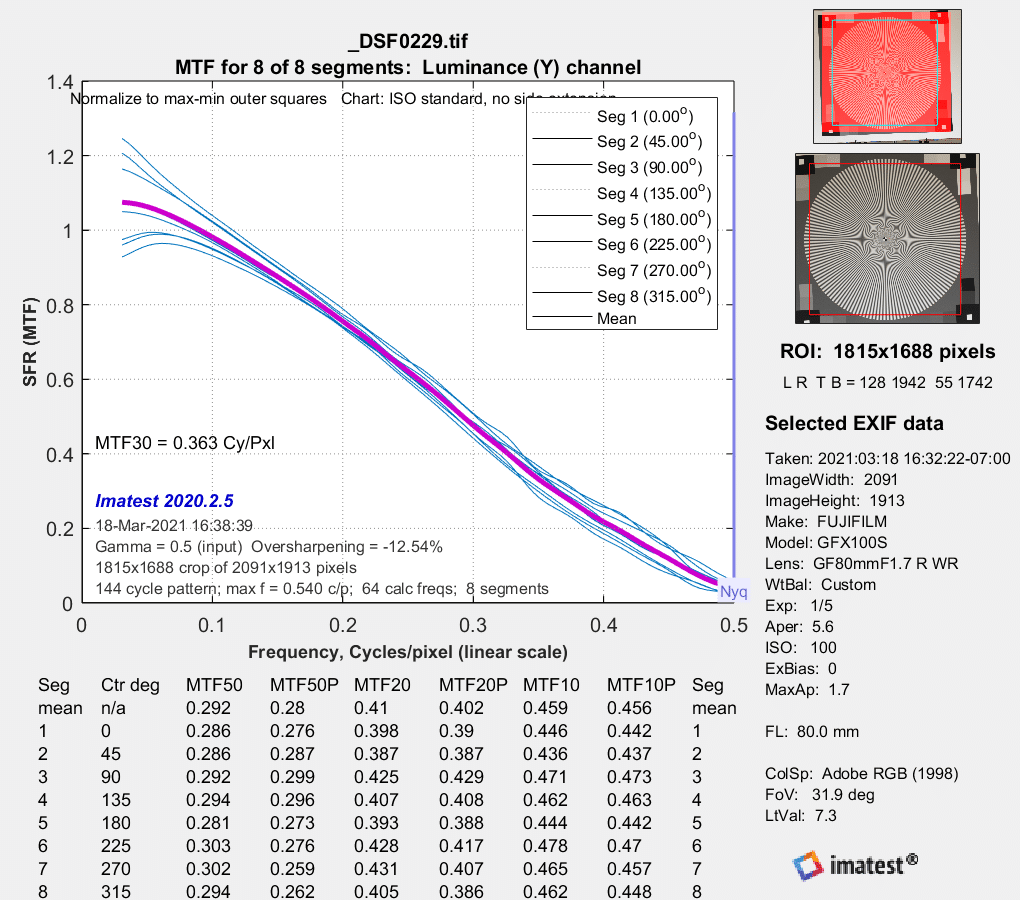 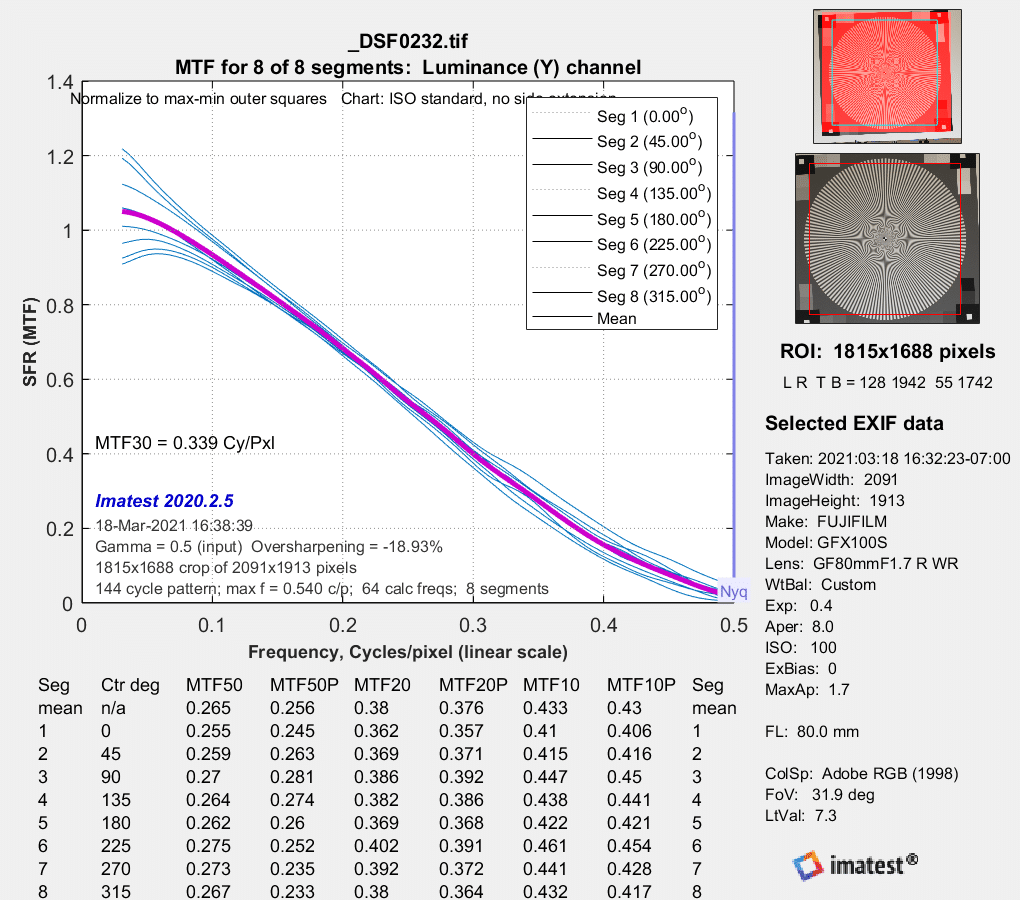 Quite a bit softer.

That was pretty boring. How about in the upper right corner? 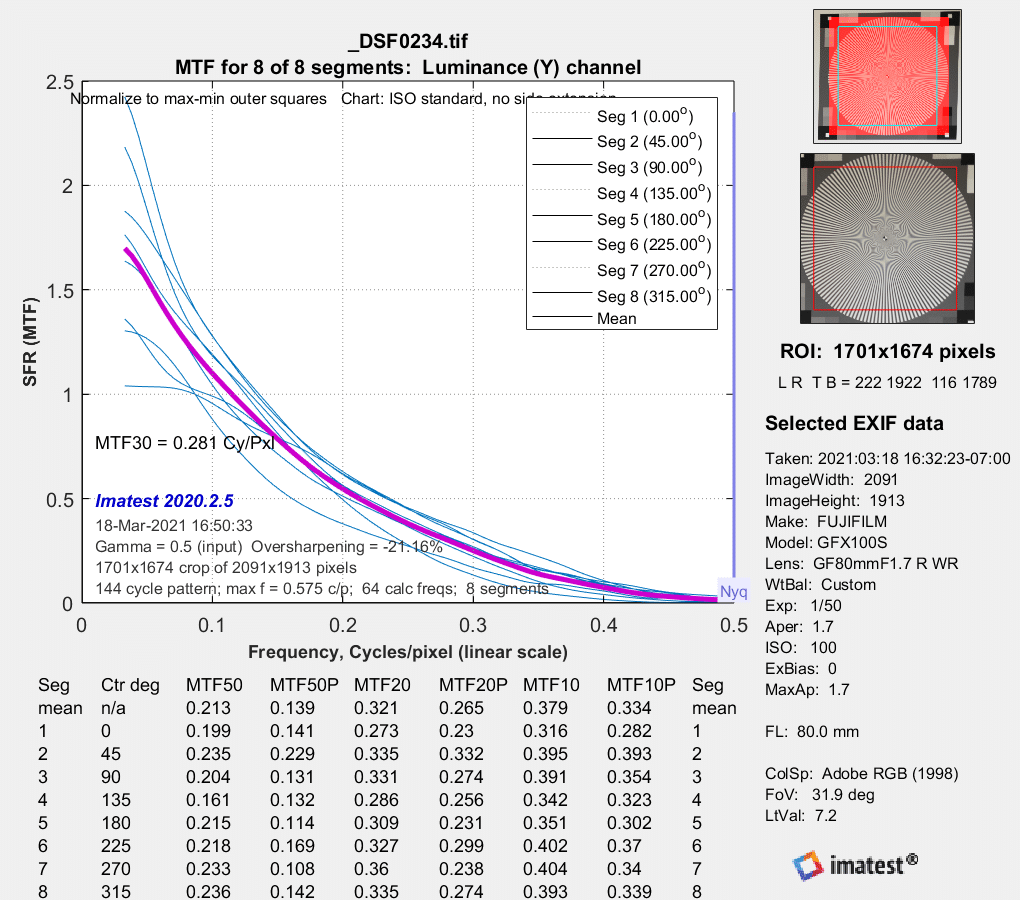 There is a large disparity depending on the angle. I’ll provide a way to visualize what’s going on further down the page. 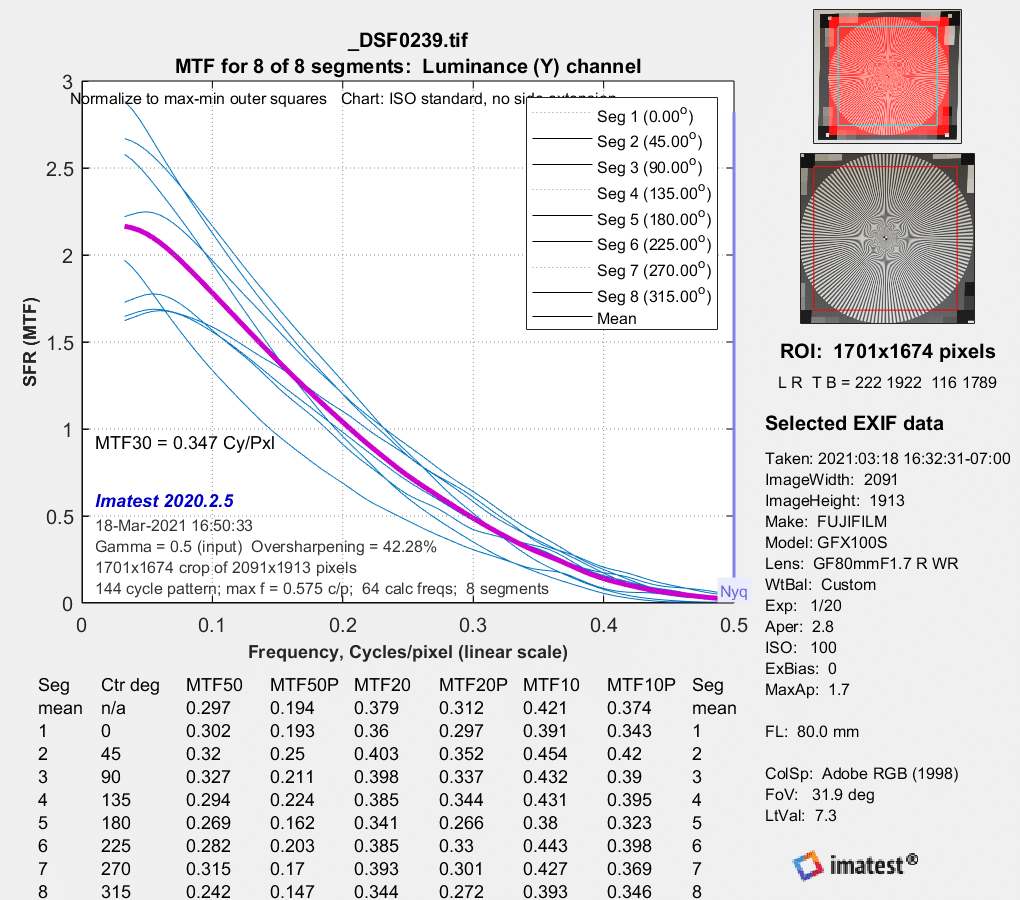 Overall, the image is quite a bit sharper. 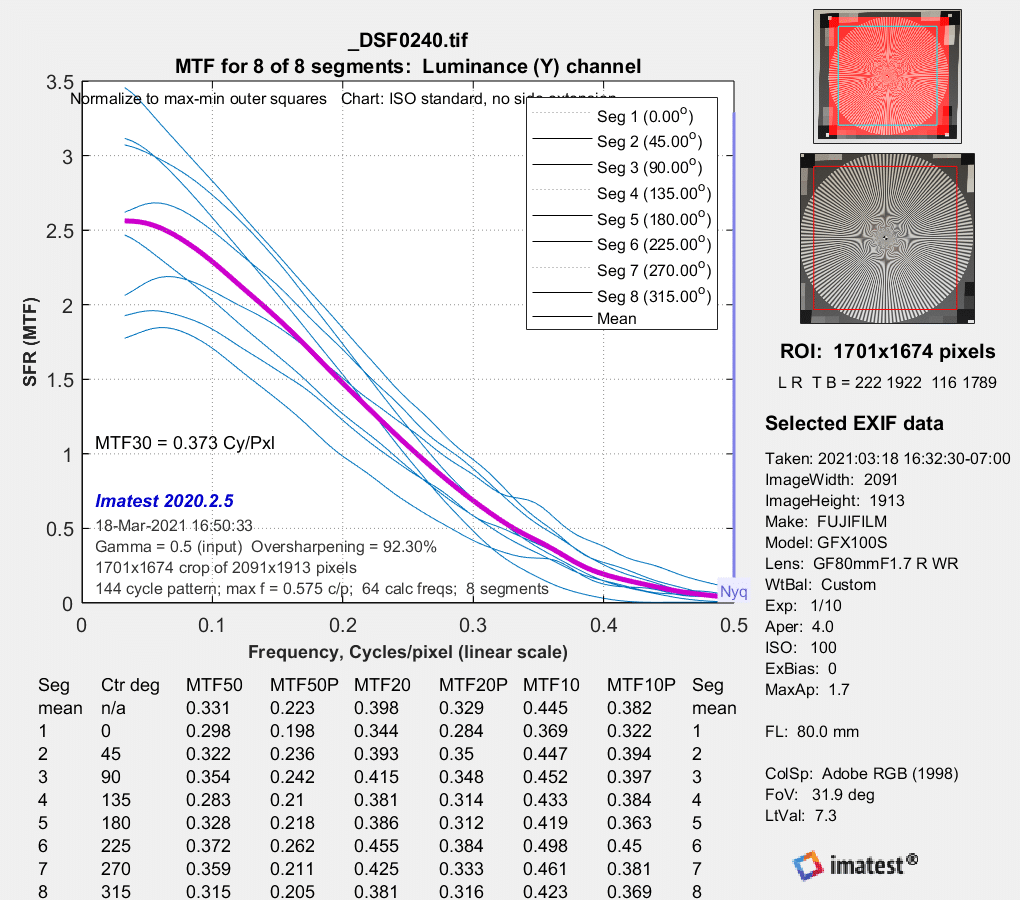 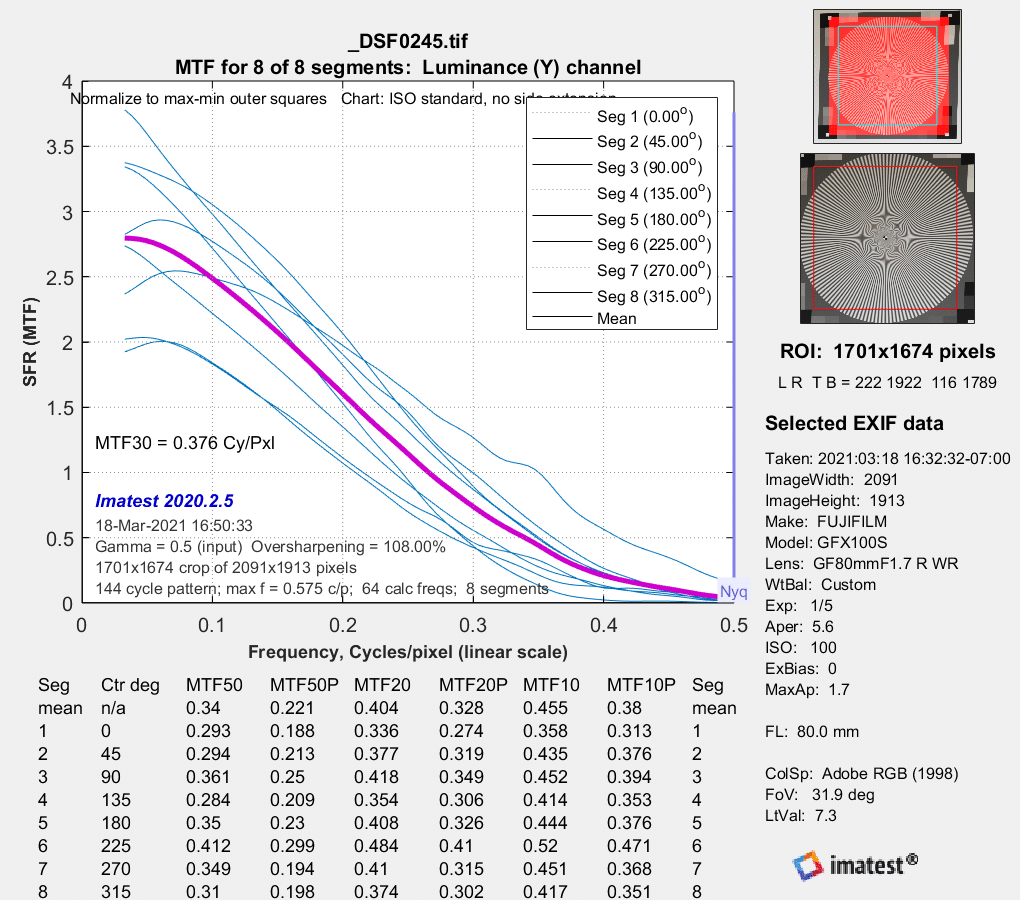 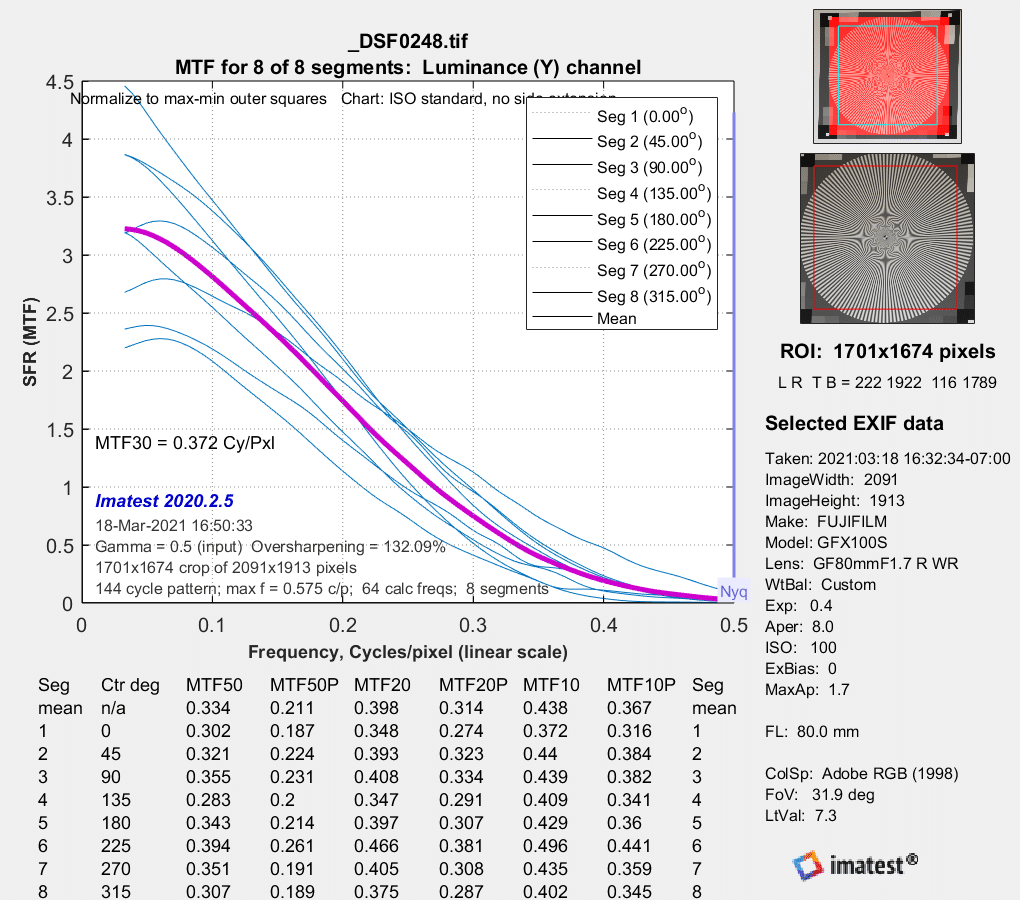 Still about the same.

Here’s a set of charts that will make it a bit easier to see which directions are good and which are not so good. 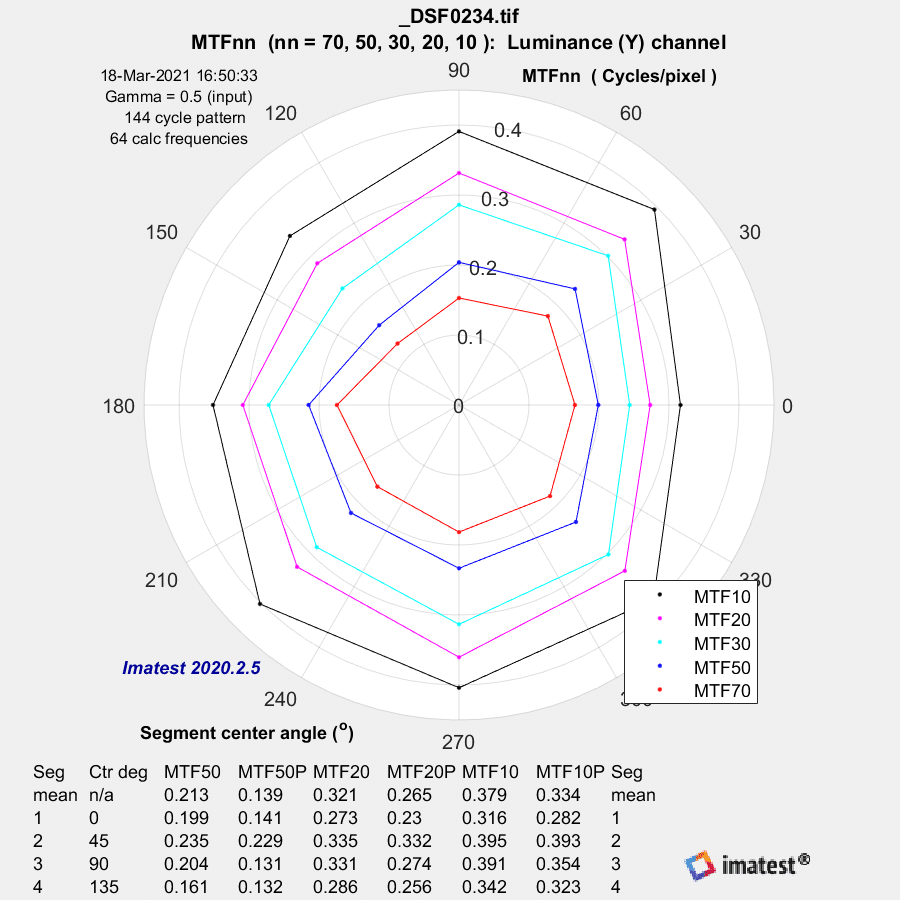 These plots need a bit of explication. Here’s what Imatest has to say about them:

The plot,…shows MTF70 through MTF10 displayed in polar coordinates. Spatial frequency (cycles per pixel in this case) increases with radius. (This is the opposite of the image itself, where spatial frequency is inversely proportional to radius.)

The better the lens, the further towards the outside of the plot the data is. We’re looking at the upper right corner of the frame, so, thinking in terms of compass headings, the line from the center of the image to the corner is roughly SW to NE, and the lense is resolving better along that line. The line perpendicular to that is in the NW/SE direction, and the lens is resolving worse along that line. 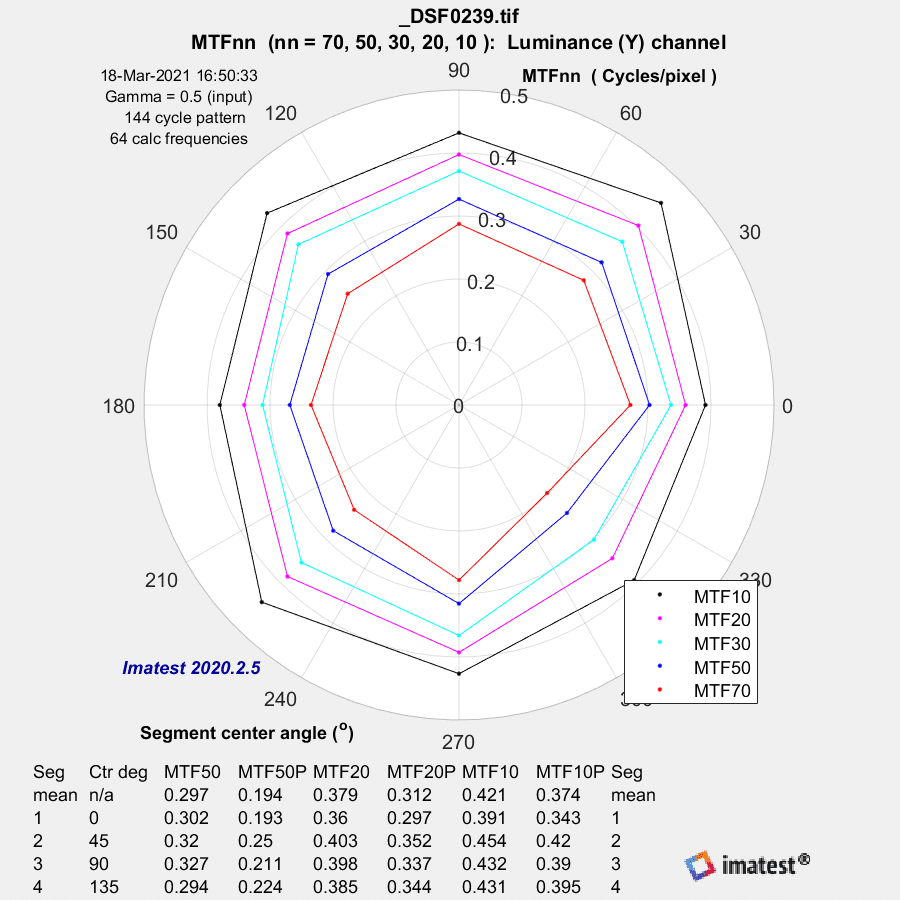 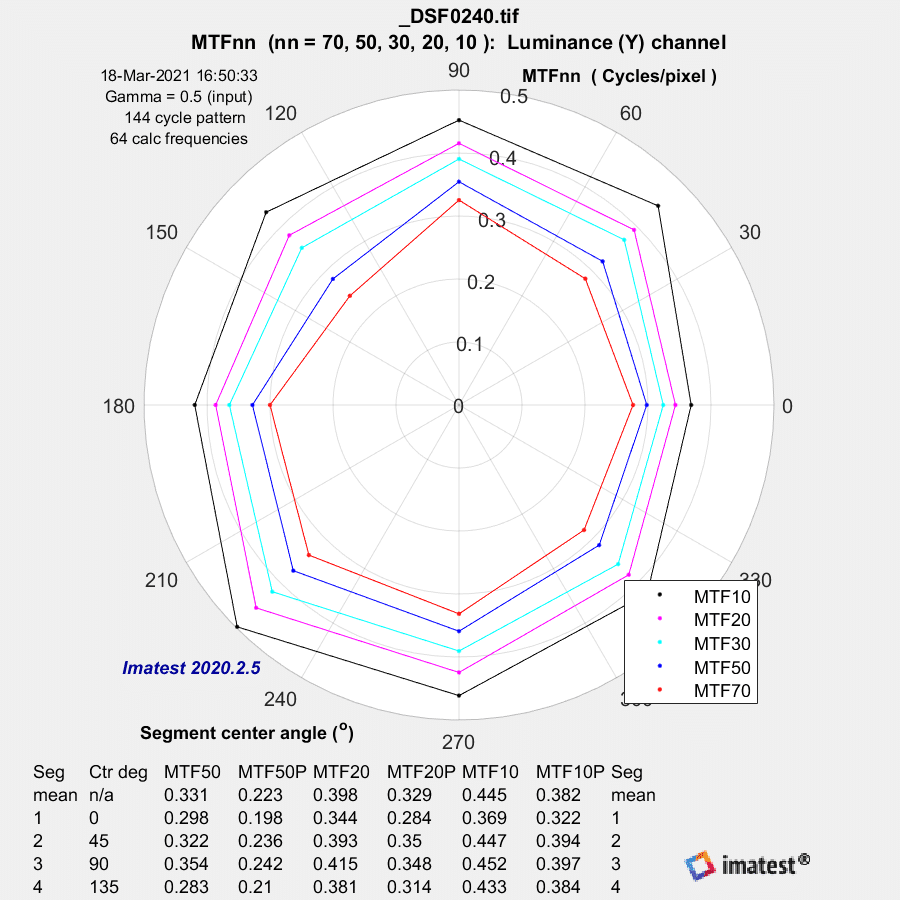 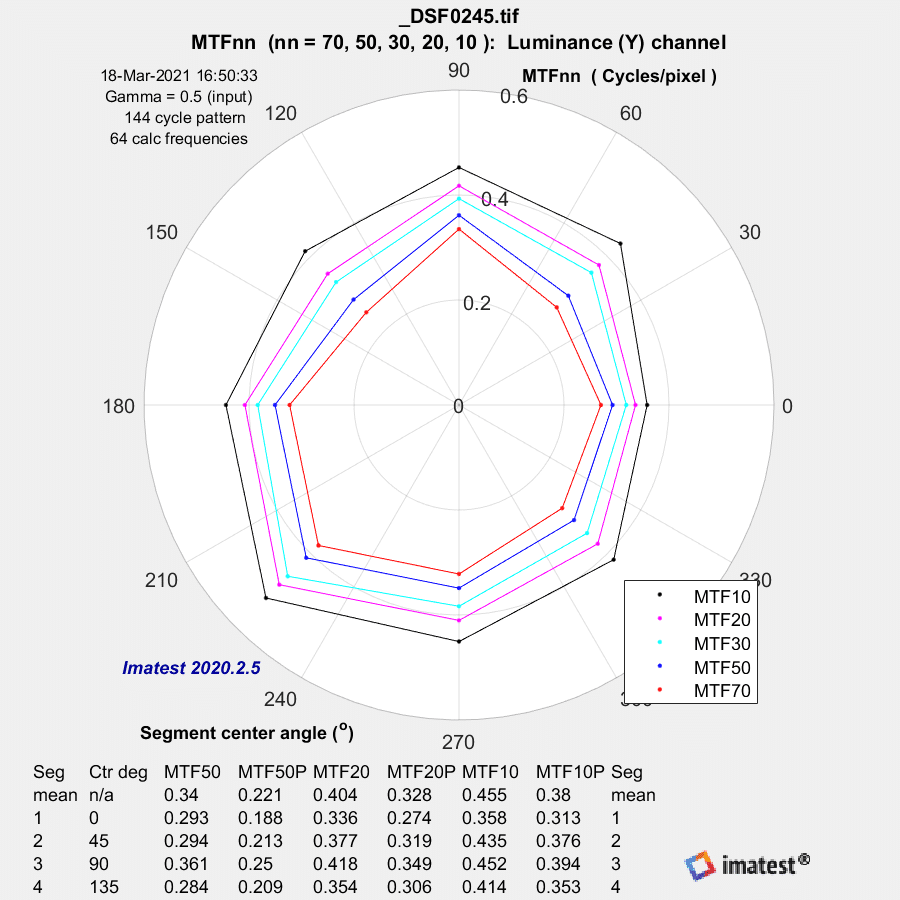 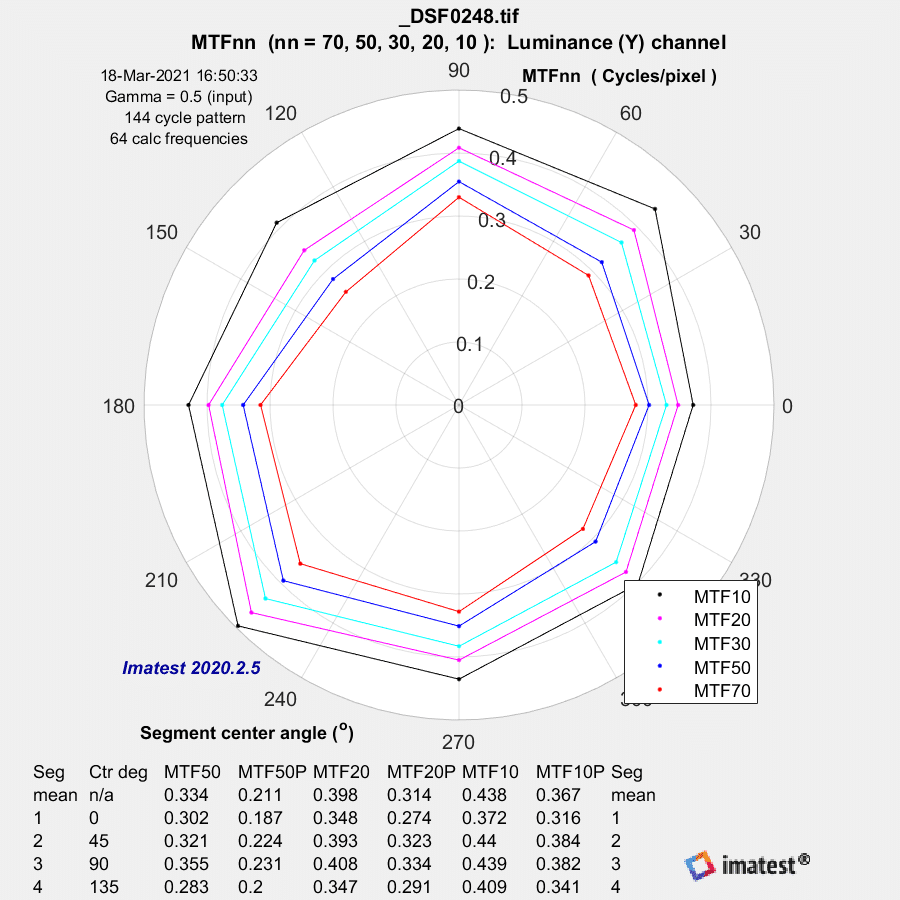 I wouldn’t place much stock in these results. I will do a more conventional slanted edge test and report on what I find.