A few days ago, I wrote a post comparing the Fuji 250/4 against the Rodenstock 180/5.6 HR Digaron on a GFX 100S. After that post, several people suggested that I might have a bad copy of the 250/4 GF. Someone on DPR said that he thought his 250/4 was about as sharp in the image field (my characterization) as his other GF lenses. He posted some Siemens star images, which I found intriguing, but inconclusive. Yesterday he sent me the results of some slanted edge testing that he had performed on his GF lenses (he used MTF Mapper for the analysis), which seemed to bear out his assertion about the relative sharpness of the 250/4. I asked for the raw file for the 250/4 shot, and he obliged.

There were some possibly material differences from my test conditions:

If he used an F-surface target, those last two might cancel each other out.

Here’s an Imatest STF analysis of his test shot: 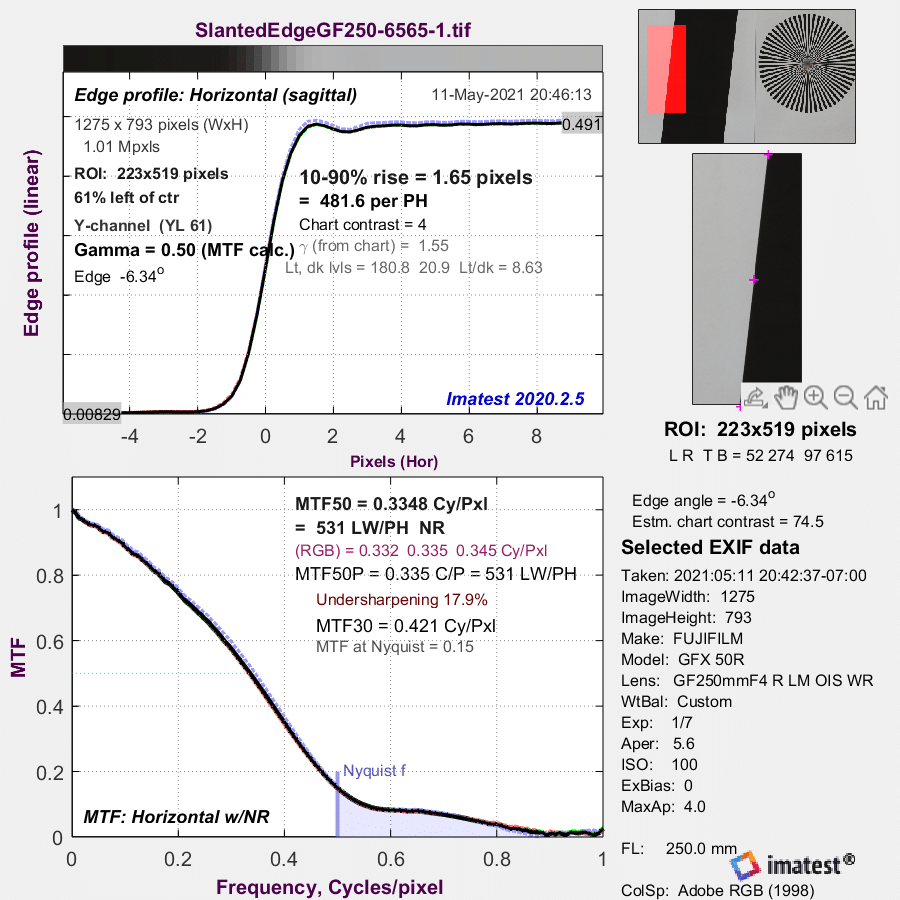 And here’s a similar analysis of my shot: 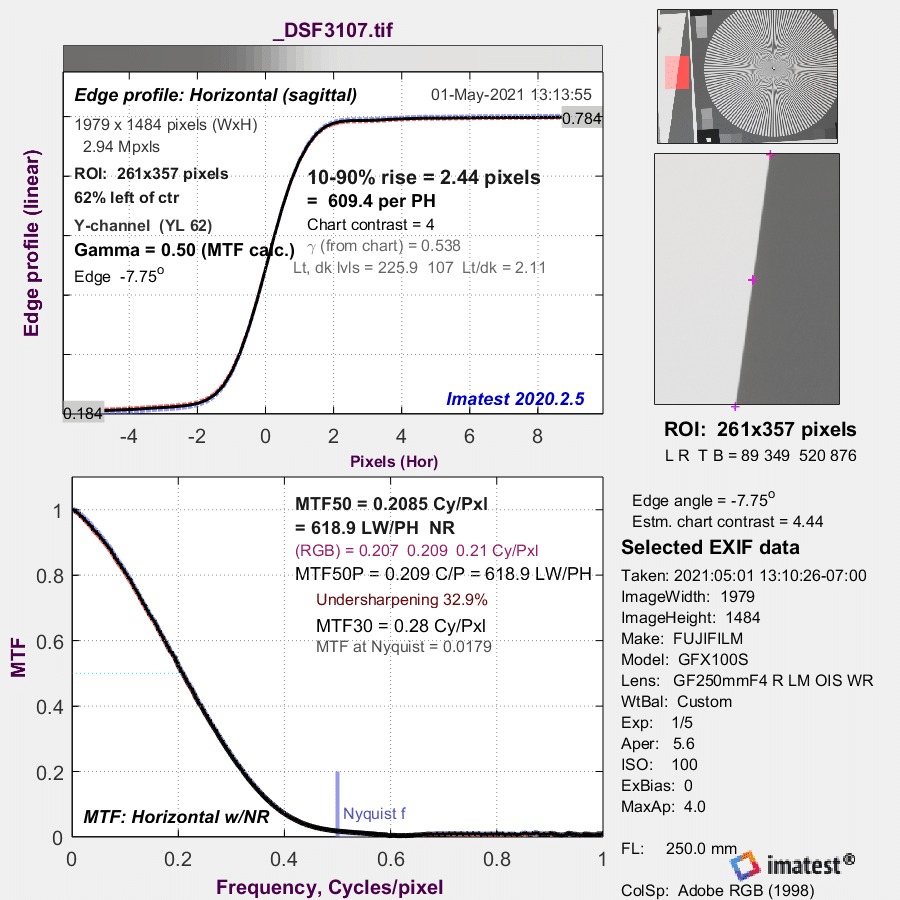 There is quite a bit of overshoot on his edge profile. That shouldn’t happen with sharpening turned off. Lightroom has performed some behind-the-scenes sharpening for some cameras in the past; is it doing that for the GFX 50R?

A big difference is the pixel pitch. We can correct for that mathematically by converting to cycles per picture height.

As a way to track down the overshoot, I extracted the G1 raw channel from each raw file, and analyzed that. 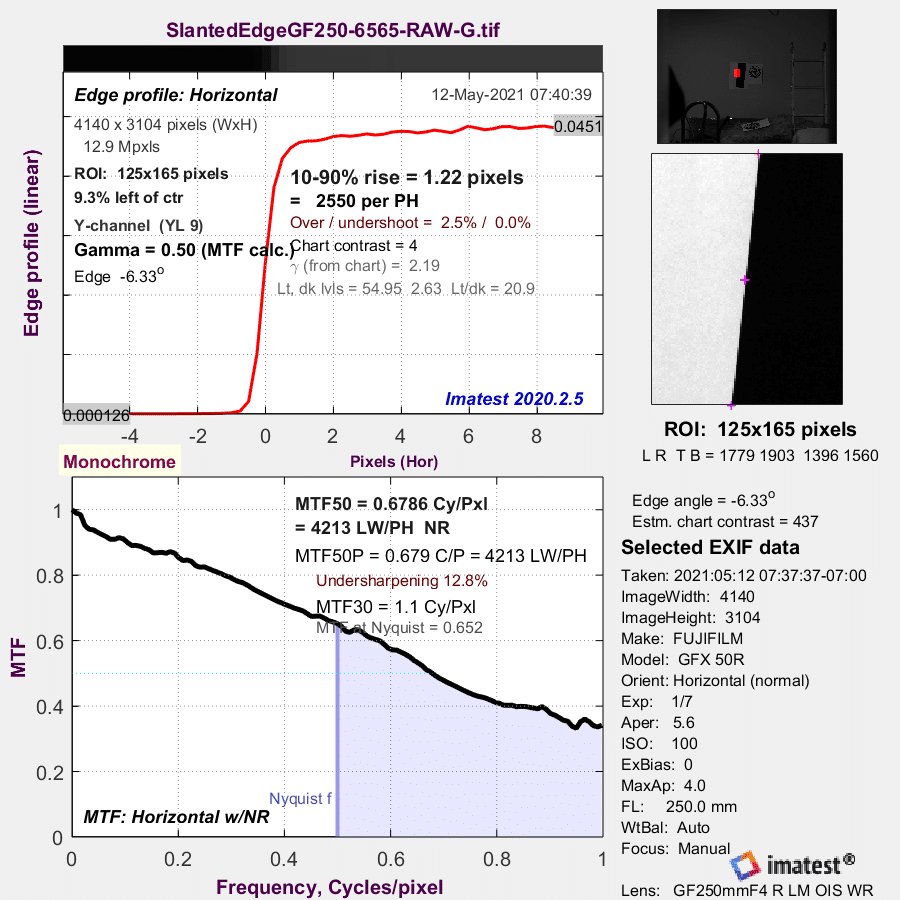 The overshoot is gone! Shame on you, Lightroom. 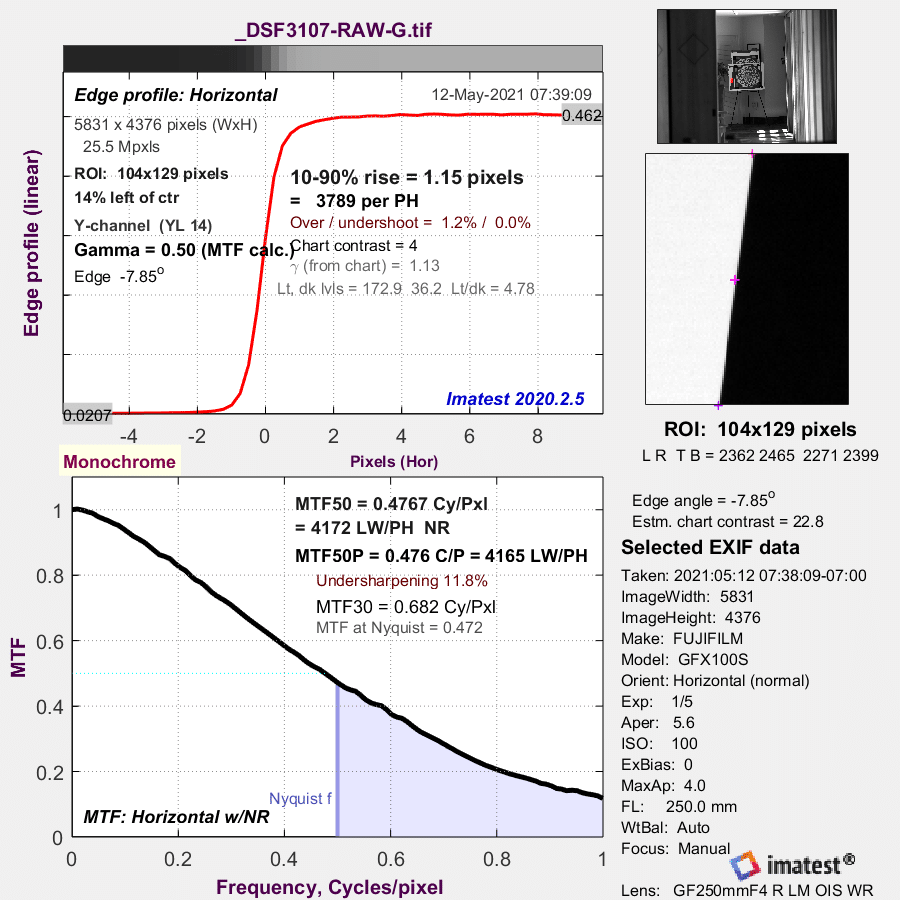 Because 1/4 of the pixels are used, the Nyquist frequency and cycles/pixel are twice what they would be for the full image. I will correct for that mathematically.

Now the MTF50 values in cy/ph are essentially on top of each other, but the MTF 30 values are a bit further apart. I did notice when I was comparing the microlens sizes of the GFX 50S and GFX 100 that The GFX 50S did tend to be a bit sharper at high spatial frequencies.

I think that, based on this test, there is little difference between our two copies of the Fuji 250 mm f/4 GF lens.