This is one in a series of posts on the Fujifilm GFX 100. You should be able to find all the posts about that camera in the Category List on the right sidebar, below the Articles widget. There’s a drop-down menu there that you can use to get to all the posts in this series; just look for “GFX 100”. It’s also about the GFX 50S and GFDX 50R. Further information about those cameras can be found under the category “GFX 50S”.

When the GFX 50S first came out, Fujifilm made a big deal out of an unusual design choice. It had been the fashion in recent camera design to use microlenses that achieved what’s known as an effective fill factor of nearly 100%. That means that nearly all of the light that fell on the sensor was directed to photosensitive areas on the silicon that underlays the microlens, so that it could ultimately form part of the image. The small microlenses on the GFX 50x (a term that I use to encompass both the GFX 50S and GFX 50R) made the captured images sharper — astonishly so, in measurement that I made — and also made the camera more prone to aliasing. It also made the camera somewhat less sensitive to light, since some of the light falling on the sensor was not used to form the image. That in turn made the camera a bit noisier in the shadows for the same exposure, but no more noisy if the exposure were increased to compensate for the reduced sensitivity.

At first, I thought the small microlenses were a good thing, but then I started to look at the images posted by GFX 50x users, and noticed that many, if not most, were oversharpened (in some cases, comically so). That situation got worse when Lightroom and Adobe Camera Raw increased the sharpening in their default settings. I’ve seen portraits where skin texture reminds me of photographs of the far side of the moon. I’ve seen shots with eyelashes that look like deadly weapons. I’ve seen landscapes with etched crystalline hyperclarity that they look like bad CGI.

I was already having misgivings about those microlenses, but measuring and using the GFX 100, which appears to have normal, near 100% fill factor microlenses, has given me a different perspective on the GFX 50x sharpness, and I’ve become more negative in my thoughts about them.

Here’s a measurement that is telling: 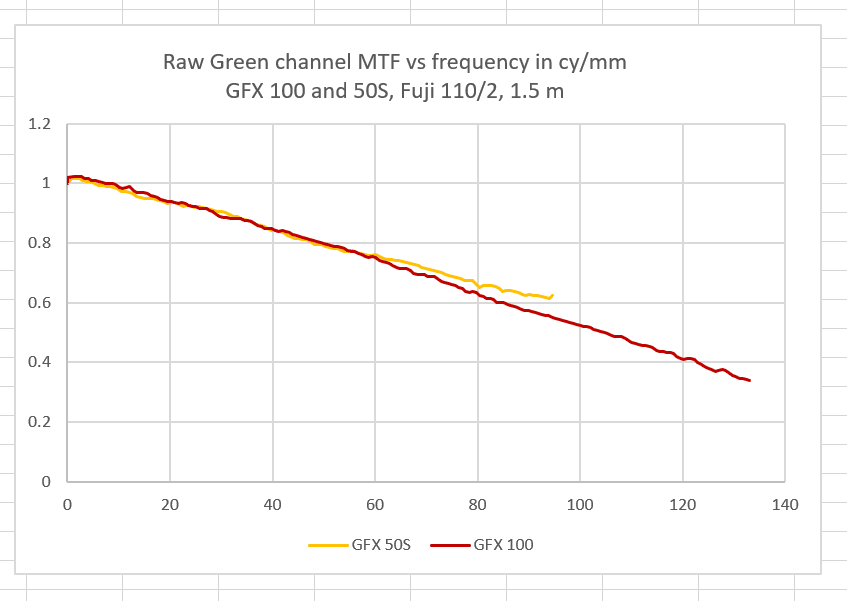 The GFX 100’s aliasing and false color occurs at a higher spatial frequency than the GFX 50R’s; put that down to the pitch difference. The aliasing in the GFX 50R is more pronounced; that’s coming from the small microlenses.

It’s early days, but the GFX 100 real-world images — as opposed to shots of contrived targets like the two immediately above — seem to be look smoother and more natural than the GF 50x shots, even when I back off on the sharpening further in the case of the 50 MP sensor.

The false color in the GFX 50R images goes beyond the usual magenta/blue/green/yellow moire. Look further out than those artifacts on the GFX 50R Siemens Star image above and you can see the neutrals shift color. You can see in the GFX 50R tree image above that there are places that look like they suffer from magenta/blue LoCA fringing. But those areas look fine in the GFX 100 image, which was made with the same lens at the same settings, so it’s not really LoCA, just an artifact that looks like LoCA. And the GFX 50R image just appears jittery next to the GFX 100 one.

There’s still aliasing in the GFX 100 images above, just less of it than in the GFX 50R shots. I expect that, over time as sensor resolutions increase so that diffraction provides more antialiasing, that we’ll see a new naturalness in large prints.