This is one in a series of posts on the Fujifilm GFX 50S and 50R. You should be able to find all the posts about that camera in the Category List on the right sidebar, below the Articles widget. There’s a drop-down menu there that you can use to get to all the posts in this series; just look for “GFX 50S”. It’s also in the Z6/7 category.

In the last two posts I conducted an informal comparison between the Fuji 100-200 mm f/5.6 zoom on the GFX 50R against the excellent Nikon 70-200/2.8E on the Nikon Z7 at 100 mm for the Fuji and 70 mm for the Nikon, and 200 mm for the Fuji 145 mm for the Nikon. I received a request to test those two lenses at the FF equivalent of 85 mm (117 mm for the Fuji), and to throw the Otus 85 into the mix. The Z7 and the GFX have the same resolution horizontally, but I’m a fan of 4:3 pictures, so I equalized for image height. If you like wide aspect ratios, you may consider that to be stacking the deck.

Here’s the scene with the GFX and the zoom set to 117 mm, with the target area in the upper right corner. The tree top is about 40 meters away. 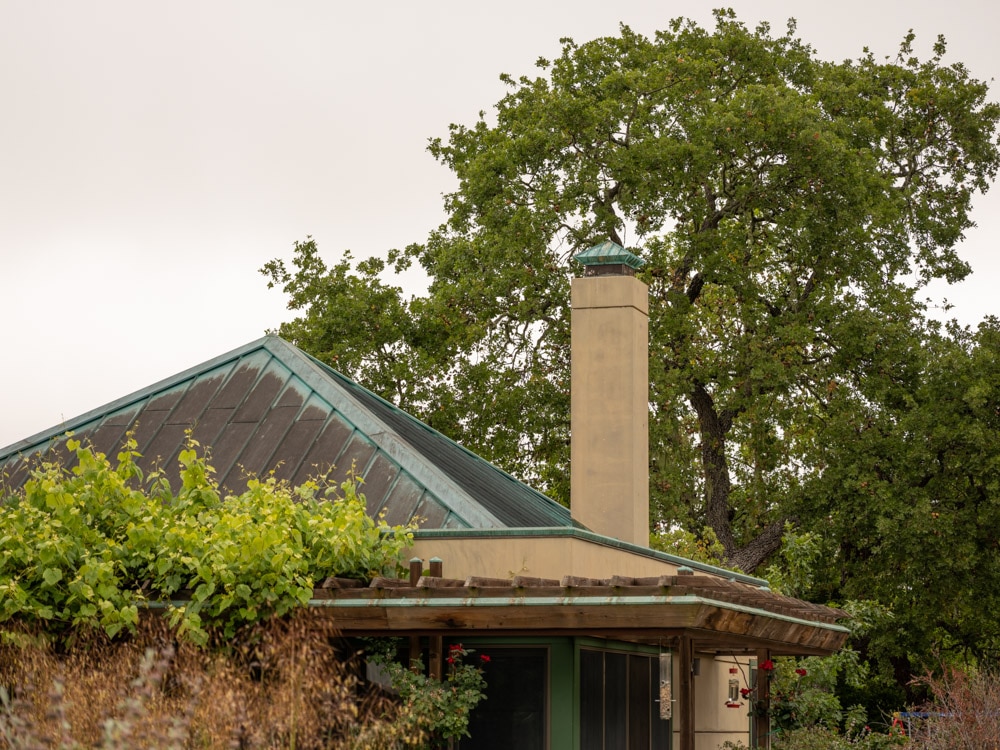 Making three shots for each variation and picking the sharpest, I exposed at base ISO of 100 for the GFX, and 64 for the Z7.  I used pinpoint AF on the Z7 with the zoom, which means that both cameras were using CDAF. The CDAF on both of them is so good that there was far more variation between the sets of shots than there was within each series of three at the same settings. I could almost have flipped a coin to pick the sharpest. I used AF-S and a small spot, focusing on the target grove of trees.  For the Otus, I focused at maximum magnification with peaking turned on.

Images developed in Lightroom, with default settings except:

I did not try to defeat Lightroom’s silent distortion correction.

Here’s how to use these highly-magnified crops. The dimensions of the GFX sensor is 8256×6192 pixels. If we make a full-frame print from the GFX on a printer with 360 pixels per inch native driver-level resolution, like the Epson inkjet printers, we’ll end up with a 23×17.2 inch print. The 317×246 pixel crop you’re looking at will end up 0.8×0.68 inches (2.12×1.74 cm).  Let’s imagine that you or your viewers are critical, and will look at the 23×17.2 inch print from about 18 inches (conventional wisdom is that the distance would be a little greater than that, or 29 inches (the diagonal), but you did buy a high-resolution camera for a reason, didn’t you?). The Z7 crops are 282×219, so they are blown up a bit more to make the picture height the same. As I said earlier, that stacks the deck against the Z7.

The next step is dependent on your monitor pitch, which you may or may not know. Turns out, you don’t have to know it. Just take the 250% crops and view then at 1:1. How high are they? Get out your ruler and measure, or just guess. Let’s say they are 6 inches high. 6 inches is about 7 times 0.8, so in order to view the crops the way they’d look from 18 inches on the print is to view them from 7 times as far away, or 10.5 feet.

You can see that the Otus has the least purple fringing, though it is not much sharper than the other two. However, in the 4:3 corner case, it is the only lens that is sharp enough there to show aliasing. I don’t consider the sharpness differences to be significant. The Otus also has the most contrast. The Nikkor has a moderate amount of purple fringing. This is excellent performance for the Fuji zoom.

I think that all three lenses are so good that mostly what you’re seeing is the increased sharpness that is available with a physically-larger sensor with a greater number of pixels in an image column. When viewed at native resolution, the Z7 images appear sharper in comparison, but they get more magnification in theses crops to make the field of view the same for both formats.

Again, the Otus shows aliasing artifacts. The Nikon’s purple fringing has cleaned up by a lot. The Fuji is sharper in its corner than the Otus is at the extreme corner of the 2:3 frame. Again, this is excellent performance for the Fuji Zoom, and a very good showing from the Nikkor.

The Nikkor’s purple fringing isn’t entirely gone. Other than that, there is little difference among these.