This is a continuation of a series of posts on the Fuji GFX 50S.   You should be able to find all the posts about that camera in the Category List on the right sidebar, below the Articles widget. There’s a drop-down menu there that you can use to get to all the posts in this series; just look for “GFX 50S”. This is the second post in a series on the Fuji 250 mm f/4 lens for the GFX.

When I test lenses, I do a lot of specialized testing with targets made for the use and report quantitative results. However, I also like to do some informal testing using foliage. That’s what you’ll see today. For comparison, I’ll include some shots with the well-respected Leica 180 mm f/3.4 Apo-Telyt-R on the Sony a7RII. In all cases, both cameras were set to ISO 100, and the electronic shutter was used with a 2-second self timer. Cameras were on an Arca Swiss C1 head on RRS carbon fiber legs. I picked this scene and shot it early in the morning when the wind was calm. The focusing was manual. I made four shots at each aperture, and you’re looking at the sharpest (or nearly so; there was very little difference among the images). 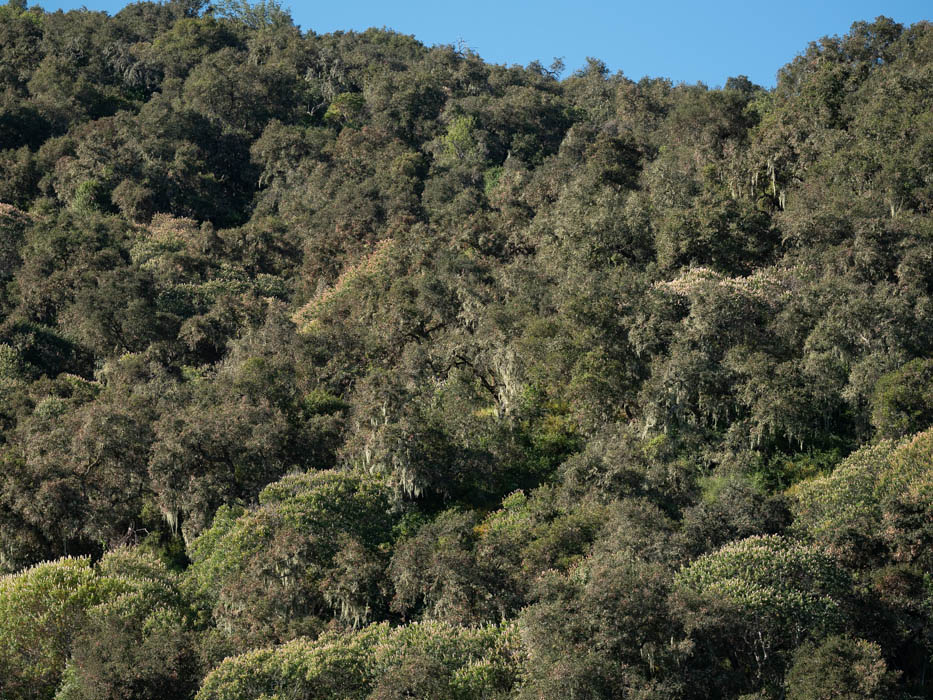 Now I’ll show you some tight crops with both cameras.  I am developing the raw files in Lightroom with nearly the default settings (exceptions are exposure and white balance adjustments). I export tight crops from the developed images as 700-pixel-high JPEGs. That means that the images are all heavily upsampled. The GFX images are 253% of their original size in both dimensions. The a7RII images are at 295%. The different ratios are necessary to compensate for the variations in the height of the three sensors when measured in pixels.

No matter what you do, these crops are all going to look horrible. I’m blowing them up so much so that they will represent the original file after JPEG’s discrete cosine transform has had its way with them. If you want to get a good idea of what the images would look like printed, get far away from your monitor. No, farther than that. Put a bunch of the images up on the screen and back up until the best one starts to look good. Then look at the others.

There’s another reason why these images won’t look like the best thing the camera/lens combination can deliver. They’re demosaiced with Lightroom. Lightroom is not awful, but for a particular image, there are usually better raw processors. I use Lr because it’s a de facto standard, because I know it well, and because it’s got good tools for dealing with groups of images.

When correcting for image height, the 180 mm Apo-Telyt on the a7RII is equivalent to the 250 mm Fuji lens on the GFX. The equivalent aperture of the Fuji’s f/4 would be about f/2.8, but the Leica lens doesn’t open up that far, so f/3.4 is going to have to do.

The GFX image is definitely crisper.

Now things are getting closer.

The Fuji is still better, because of the greater resolution and the smaller microlenses, in addition to any lens differences.

In the upper right corner of the GFX and of a 4:3 crop on the a7RII:

Neither lens exhibits a lot of sharpness falloff.

The Sony and Leica combination is doing quite well but is no match for a sharper lens on a higher-resolution camera. The 250 is much easier to focus critically than the 180, which has a fairly touchy helicoid. The Fuji focus-by-wire software works really well with the 250 unless you want to quickly change focus distance over a large range.