When I posted the Z7 shutter shock results a few days ago, someone claimed that shutter shock was highly sample dependent. I’d noticed nothing of the short when I was testing a7RIIs, but today I got hold of another Z7 and decided to measure both. 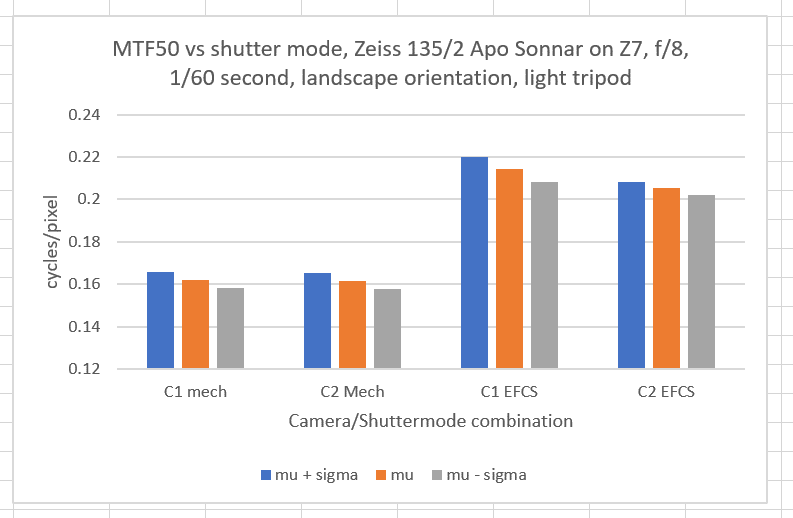 C1 is the original Z7, which has a serial number that indicates that it is about the 2,000th camera produced. The new camera is identified as C2; its serial number is about 9000 after then first one. The averageMTF50 values — MTF50 is a good proxy for sharpness– (aka mu values), and the average plus one standard deviation (mu + sigma) and the average minus one standard deviation (mu – sigma) values are plotted in groups.

You can see that I didn’t focus both sets of images quite the same way, since the camera 1 EFCS results are better. You can also see that the shutter shock is sufficiently strong than the blur introduced by the shock is far greater than that caused by the misfocusing, and both cameras produce essentially the same results for the fully mechanical shutter. 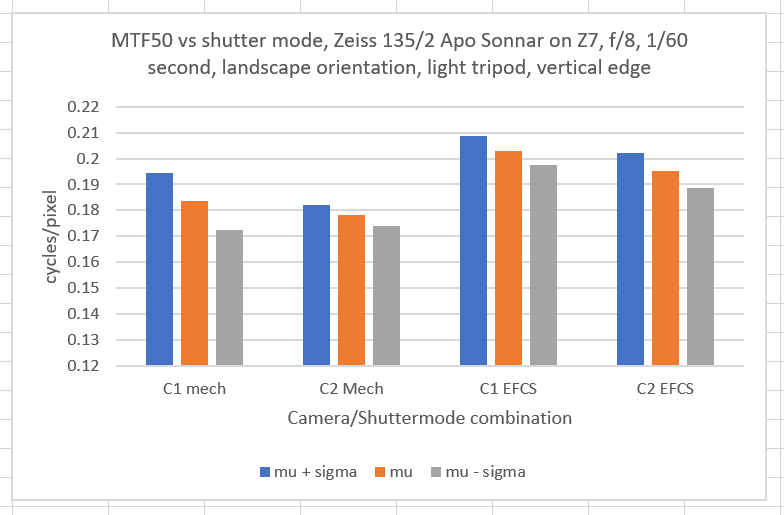 Since the camera’s shutter operates mostly in the up/down direction, it doesn’t affect vertical edges as much as horizontal ones, even though the tripod is stiffer vertically than horizontally.

I ran a similar test with the Z7-native 24-70 mm f/4 Nikkor S at 70 mm. In order to get rid of the dependence of the results on initial manual focusing accuracy, I set the camera to AF-S with the pinpoint spot. I used an external intervalometer to trigger the series of shots since the internal one doesn’t let you see the visual verification of focus acquisition. The mounting arrangments were different, too. With the Zeiss 135, I clipped the camera in via the 1/4-20 filling on the bottom of the FTZ mount. With the 24-70, I used the mount on the base of the camera. This is better for stability since the up/down forcing function from the camera is now located more squarely over the center of the tripod. 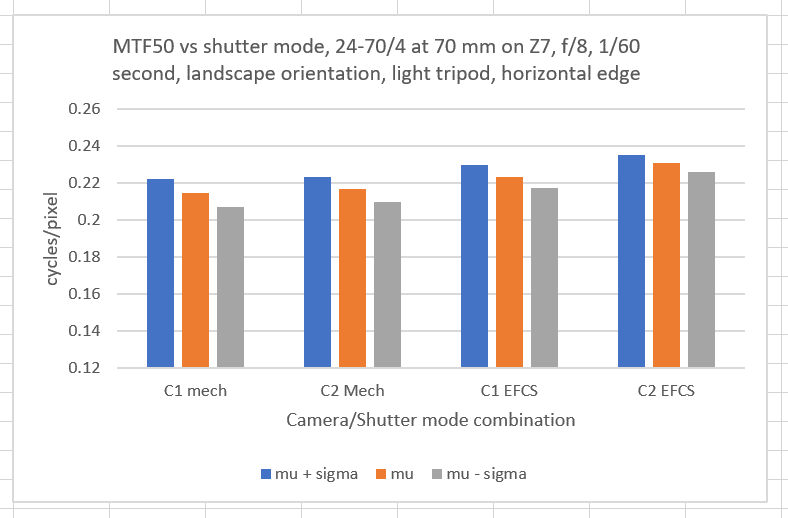 Because of the combination of the different mounting arrangement and the shorter focal length of the lens, shutter shock is much less of a problem here. Both cameras perform substantially the same, though.

Although a sample space of two is not statistically significant here, this reinforces two conclusions that I’ve come to: