You are here: Home / The Last Word / More on tilted adapters

This is a continuation of yesterday’s post. If you haven’t read it, you should go back and take a look.

It has been said about adapters and tilt: “They all convert a good copy of a lens optically into the equivalent of a bad copy of the lens. Or a great lens into a much cheaper lens.” I dispute that characterization. It’s not that it’s entirely bogus, but it does ignore one salient fact:

Even adapters with a slight tilt don’t affect the sharpness of a lens; they just affect the orientation of the plane of sharpest focus on both the sensor side (in the image field) and in the photographed scene (in the object field).

The relationship between those planes of focus is well-studied:

The angle between the object field focal plane and the plane orthogonal to the lens axis increases with subject distance, and in a bit of mathematical strangeness that is daunting until you think it through, becomes parallel to the lens axis at infinity, for any amount of tilt at all (yes, for 1 um of tilt, and even for 1 nm of tilt (1/400 the wavelength of blue light.) How can we make landscapes at all? The answer is depth of field (DOF). The size of the circle of confusion is not directly dependent on the tilt of the plane of best focus in the object field, but of the tilt of the plane of best focus in the image field, and that tilt angle does not change as the lens is focused (OK, OK, I’m eliding lens extension from the focusing helicoid here). But thinking about what’s going on in object space is  to be unnecessarily complex, and a waste of time. You can get the effect on image sensor blur without even thinking about the object field or dusting off your high school trig.  If you just think of the image field, the focal length of the lens doesn’t matter, you don’t have to do the Scheimpflug thing, and you can compute the circle of confusion (CoC) diameter on the sensor from only the image field focal plane and the f-stop. You get the on-sensor CoC by dividing the image field focusing distance error by the f-stop. If you’ve got a 4um error, and you’re shooting at f/4, you’ve got a CoC of 1 um diameter.

What kinds of tilts do I see on adapters? The Novoflex ones are the best, with about 10 um side to side difference. Kipons run a bit higher, at 15 um or so. Say 20 um side to side (10 um center to side) is about as bad as you’d expect to get with quality adapters. At f/4, that would give you a CoC of a bit over 2 um at the corners, assuming you focused in the center. The diameter blur circle of a BSI sensor with no AA filter by with microlenses is about 0.9 times the pitch.

Now a 1 um CoC, being substantially smaller than the pitch of a 40-50 MP FF sensor, isn’t going to be anything to worry about. You can see its effect in the lab, but in the real world, you’d never notice. What amount of blur would you notice? If you were pixel-peeping, you’d certainly notice a CoC on the order of the pixel pitch. Let’s call that 4 um. That means that at f/4 — about as open as you’d ever use if you were going for edge-to-edge sharpness — you’d see a 32 um side-to-side tilt (16 um off on each corner), which I would consider a poor adapter. At f/8, you’d notice a 64 um side-to-side tilt. I have yet to see an adapter anywhere near that bad.

When we think about all the sources of lens blur, it is a very rough, but useful way of thinking if you don’t want to convert everything to the frequency domain, that blur circles aggregate as the square root of the sum of their squares, so the largest blur circles tends to dominate (just like with read and photon noise). Once the blur circle from some source, whether it is defocusing or lens aberrations or camera motion or subject motion, gets a fair amount bigger than each of the others, then you can ignore the others. This means if the tilt-induced CoCs are small compared to sensor aperture blur, AA filter blur, camera motion blur, subject motion blur, lens aberration blur, on defocus blur, they are not going to impact image sharpness.

Let’s compare the typical 2 um CoCs and the near-worst case 4 um CoCs that I talked about above with the errors that you see from autofocusing. 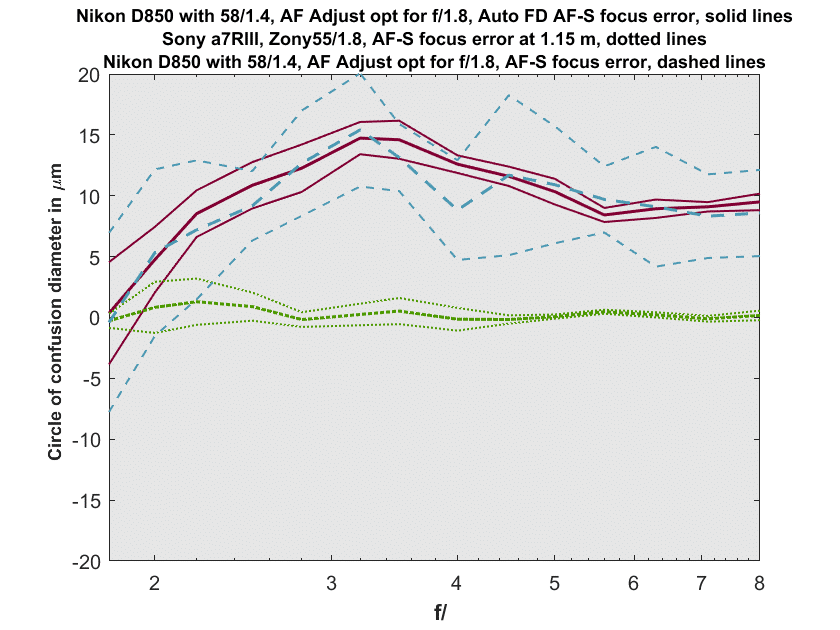 The D850 errors are substantially above the kinds of adapter-tilt-generated errors we’re talking about.  The Sony a7RIII errors are not. 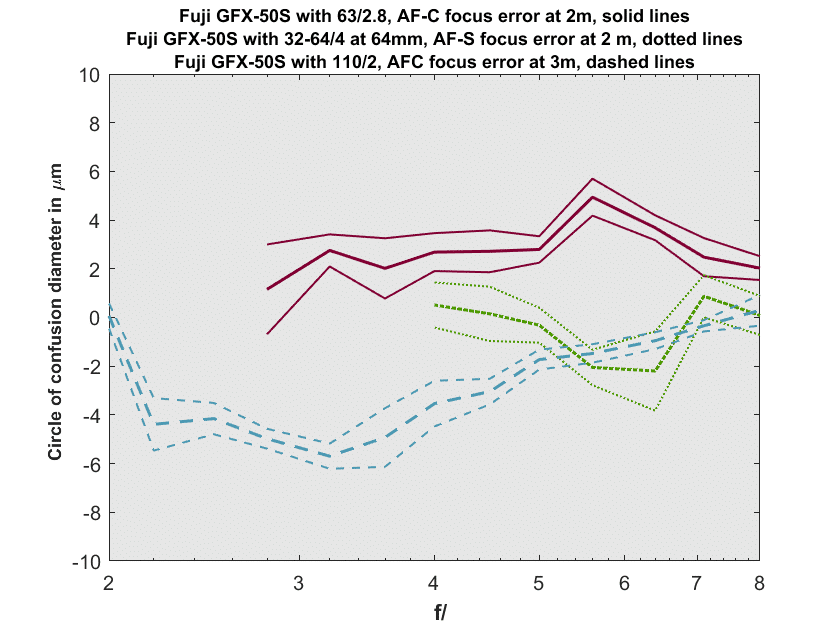 If we look at the Fuji GFX with a bunch of different lenses, we see errors that are in the same ballpark, but greater than most of the adapter-tilt errors I see.

Even precise, aperture by aperture focus tuning for the D850 doesn’t bring the errors down to what we can expect from adapters. 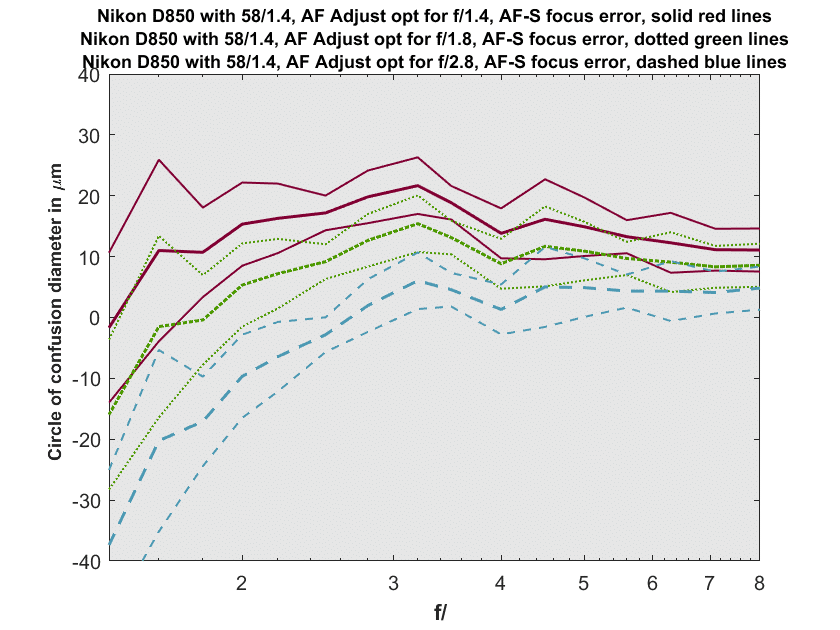 Another thing to consider is what in the image is going to be affected by tilt. Photographers spend a lot of time managing DOF, but in the end (sometimes after a lot of thought) we usually pick something and focus on it. Even if the adapter has — and the thought makes me shudder — 1 mm of side-to-side tilt, the thing we focus on is going to be just as sharp as the lens can make it, irrespective of that tilt. That’s assuming wi manually focus with live view, or autofocus using CDAF or PDAF on the sensor. We engineers say that the compensation for adapter tilt at that point in the scene is “inside the loop”.