You are here: Home / The Last Word / The Zone System and digital cameras, part 3

This is the third post in a short series about using the Ansel Adams’ Zone System with digital cameras. The series starts here.  Warning: this post assumes at least a nodding familiarity with the Zone System, as described in Ansel Adams’ The Negative (do yourself a favor and get at least the 1981 edition), and in many other places. I have been trying to demonstrate that the Zone System as practiced by Adams, when applied to current digital cameras, is at best not applicable, and at worst inimical to image quality.

I have received a comment that, although the original AA Zone System may not be applicable to digital cameras, there are modifications to it that make it appropriate and useful. The commenter referenced Chris Johnson’s The Practical Zone System for Film and Digital Photography, Sixth Edition. I got a copy have some comments of my own.

First, some general comments. Chris is a well-respected authority on the original Zone System, and the book is in general well-written. However, he doesn’t seem to understand some of the technology in current digital cameras, and there are some errors and oversights that I will mention. The publication date of the book is 2017, so it should be up to date, but perhaps the last revision was not a thorough one — the screen shots look quite dated.

Most of the book is devoted to the film version of the Zone System. Chapter Ten is entitled The Zone System and Digital Photography, and is the place where the AA’s techniques are modified for digital cameras. The discussion looks quantitative, but you will see that the diagrams are not accurate at all, so the material is really more conceptual in nature. Since the Zone System is itself quantitative — that’s the whole point! — the nature of the discussion masks the fact that the numbers just don’t add up.

In the part on similarities and differences, Johnson says that there are four basic steps shared by chemical and film photography: ISO Selection, Exposure, Processing, and Printing. I’ll agree about the last three, but not about the first. Modern CMOS digital cameras (and CMOS is getting to be the only game in town) are pretty close to ISO-less. By that I mean that the input-referred read noise is not highly dependent on the ISO setting of the camera. And even in cameras that aren’t ISOless, for a given exposure the photon noise, which is the bulk of the noise in most images, is not dependent at all on the ISO setting. Johnson says: “…using higher ISO speeds with digital cameras adds what’s call noise…in the shadow areas of your image”.  But in fact that noise is going to be pretty much the same if you crank up the ISO setting on the camera and process to darken the shadows or if you lower the ISO setting and process to boost the shadows.

Thus, choosing the ISO setting should not be fundamental to the process of exposing. In fact, choosing the ISO setting first, as Johnson recommends, puts the cart before the horse. I recommend deciding on the exposure for base ISO, and then working from there. An exception should be made for cameras with dual conversion gain, in which case you should try base ISO, and if the exposure is far more generous than is practical, switch to the lowest ISO setting with the higher conversion gain and calculate the exposure for that.

In the Exposure section, Johnson notes that, as I’ve noted before, the rules for digital exposure are essentially the opposite of that for film. He also correctly notes that exposure meters are not today calibrated for 18% gray, but closer to 12%.

Printing is quite different in the digital workflow, and Johnson points that out and explains.

Then there is a long section about digital photography that has nothing to do with the Zone System: pixels, resolution, precision (which Johnson calls “bit depth”, a 90’s word for a concept that goes back at least to WWII). There is a long discussion of scanning.

This is a fanciful, and highly inaccurate, way of forcing the Zone System on digital photography.

What are the actual values of the centers of the Zones in an RGB color space with a gamma of 2.2? 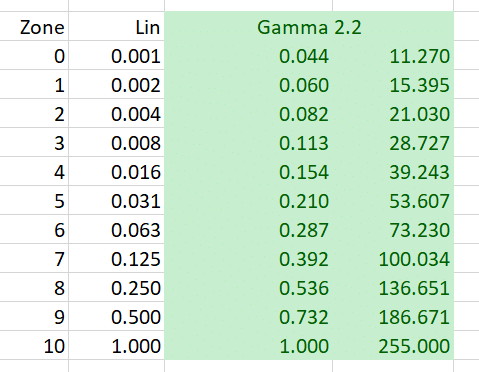 You can see that Zone V is at the top part of the lowest quartile of the range.

Using the sRGB nonlinearity, which has a linear portion that affects Zones 0 and I: 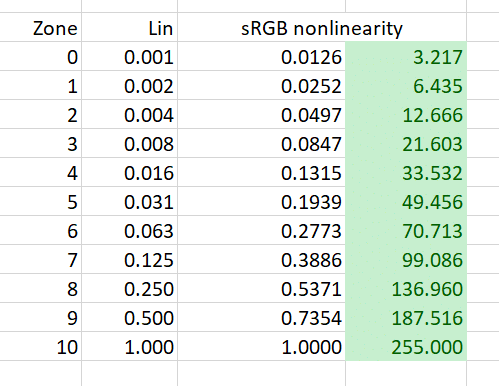 There is a discussion of pushing and pulling in digital development that makes it look like its effect on Zone placement in the histogram is linear. In fact, it is highly nonlinear: 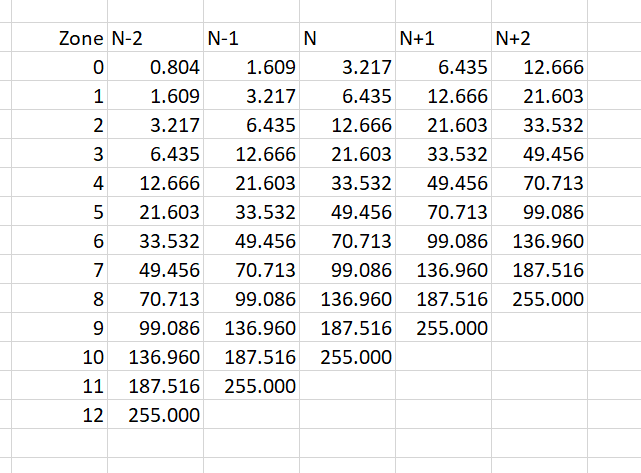 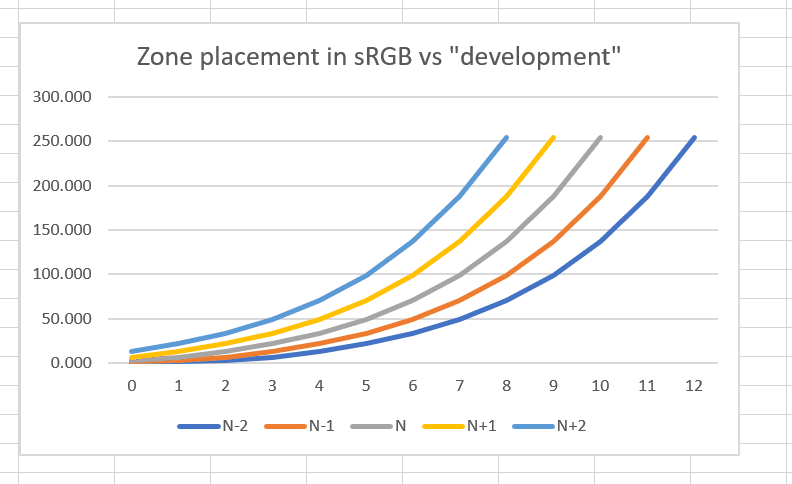 There is a long discussion of posterization and precision that completely ignores dither, and therefore arrives at misleading conclusions. This is folowed by a discussion of how to avoid banding (Johnson’s word for posterization) by manipulating exposure. In fact, in modern cameras, there is almost always plenty of dither due to dark-field noise, and posterization is hardly ever an issue.

Steping back into the Zone System, Johnson advises placing a Zone VII highlight on Zone VII, just as with film. This is only good advice if you define the Zones as I did above, not as Johnson did, and as the light meter in your camera  does. His definition will result in clipped highlights in a full-range scene.

I’ve focused on the deficiencies in Johnson’s book, but the parts that talk about digital photography in general as opposed to trying to fit it to the Procrustean Bed of the Zone Sysytem, are really pretty good, if a little dated.