You are here: Home / The Last Word / Balancing the capture of real and fake detail

It seems to me the most important contribution of the Fujifilm GFX 100 and Sony a7RIV over their immediate predecessors is reduced aliasing, rather than increased sharpness. The GFX 100 is not actually sharper than the GFX 50x cameras, if slanted-edge MTF50 is the sharpness criterion, but the images are dramatically more detailed and more free of artifacts. The differences between the a7RIV and the a7RIII are less striking, partially because both cameras appear to have nearly 100% effective fill factor, and also because the pixel pitches of the two cameras is closer, but there have been well-founded complaints that the a7RIV is not that much sharper, but I like the image detail more.

As lenses get sharper, we have the opportunity to make more realistic images. However, the things that impair resolution — diffraction, depth of field, focus curvature, and the like — become more important. So managing the sharpness of the detail that the sensor can resolve properly (information below the Nyquist frequency) becomes more important.

Camera resolution has increased, and continues to do so, but good lenses used at nearly optimum apertures can still lay down information on the sensor that can’t be resolved without error. It looks like it will be at least a decade before sensor resolution increases to the point where this will no longer be true.

Anti-aliasing filters are partially effective in preventing aliasing, but universally high resolution cameras don’t use anti-aliasing filters. So the things that can prevent aliasing boil down to diffraction, lens aberrations, and defocusing, lighting, and the subject itself. All of those are at least partially under the control of the photographer. That’s the good news. The bad news is that using any or all of these things to reduce aliasing means that you’ll reduce sharpness for detail below the Nyquist frequency. Mitigating aliasing means losing sharpness.

The dilemma for photographers is thus how to optimally balance sharpness and aliasing with the tools available. I’m going to ignore lighting and subject, since they are analytically intractable, and highly situation dependent. I’ve done tests that anecdotally look at the effects of defocusing. I’ll link to some of them in this post. But mostly what I want to pursue today is what can be learned from simulations. Before I begin, I want to acknowledge Jack Hogan, who has done a lot of work on lens simulation and has supplied me with some Matlab code that I’ve modified, extended, and used to generate the graphs that will follow.

Let’s consider a monochromatic sensor with an ideal lens, and look at the MTF of the images it lays down on a sensor as a function of f-stop-created diffusion. 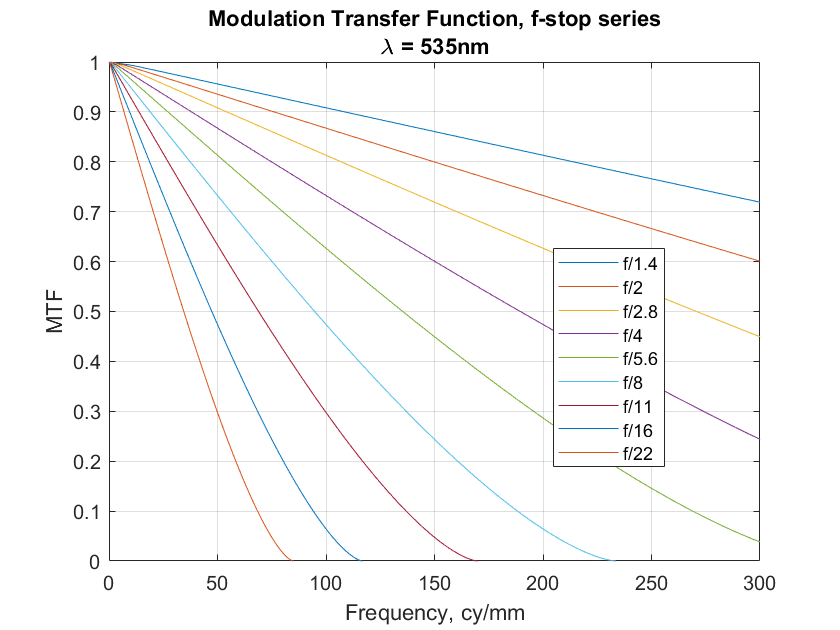 We can change the horizontal axis to cycles per pixel for a camera with the pitch of the GFX 100 and the a7RIV, which shows what frequencies generate aliasing: 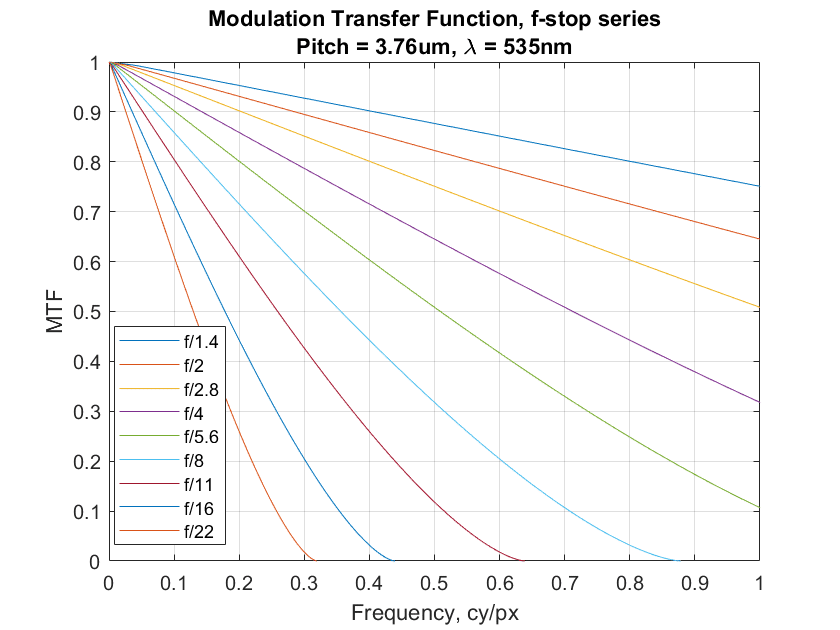 The next thing to consider is defocusing. Here’s a look at that: 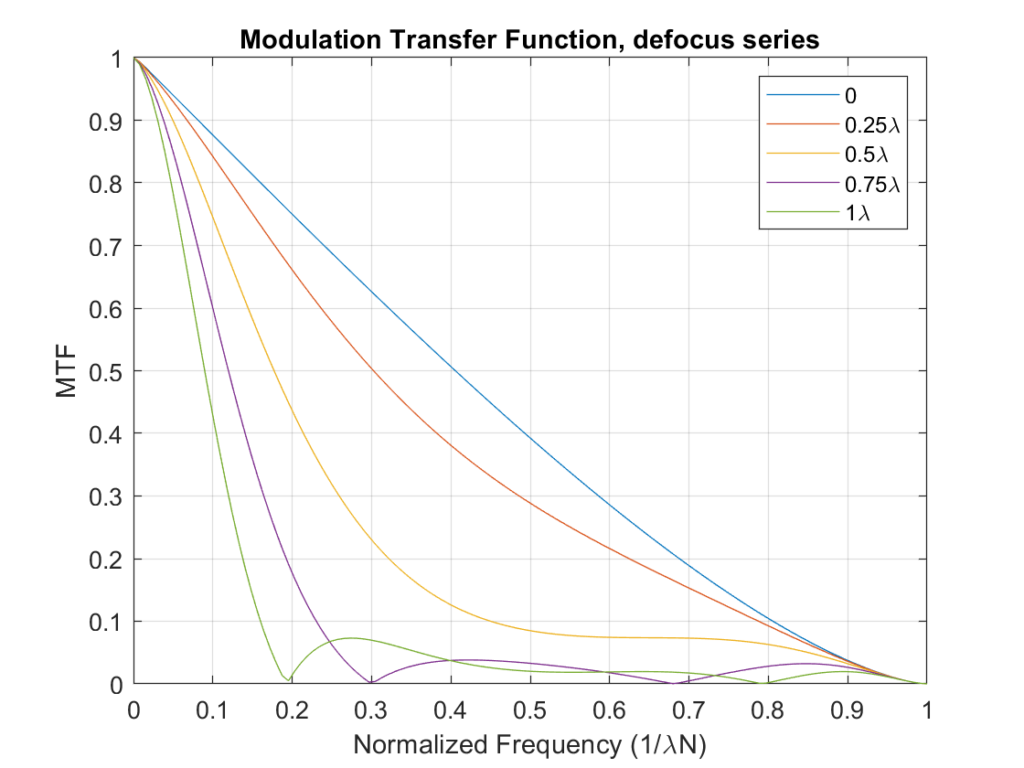 In this case, the horizontal axis is normalized by converting it to cycles per wavelength per f-stop, which has the felicitous effect of making the above set of curves apply to all f-stops. The zeros at 0.2 and 0,3 are intriguing, but they occur with so much defocus that the frequencies below Nyquist might be seriously affected, depending on the f-stop.

Spherical aberration has a similar effect: 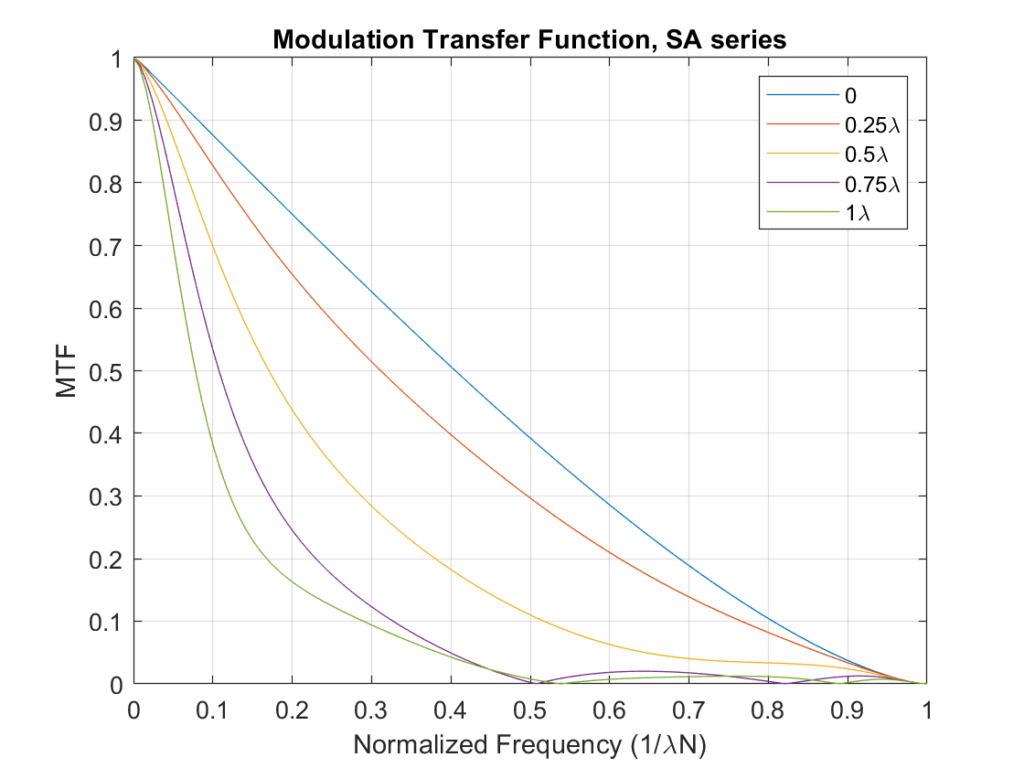 One possible pair of scalar metrics of interest in balancing aliasing and sharpness that results in accurate sampling is the average MTF above and below the Nyquist frequency. Here’s what that looks like for the pure-diffraction case, as a function of f-stop: 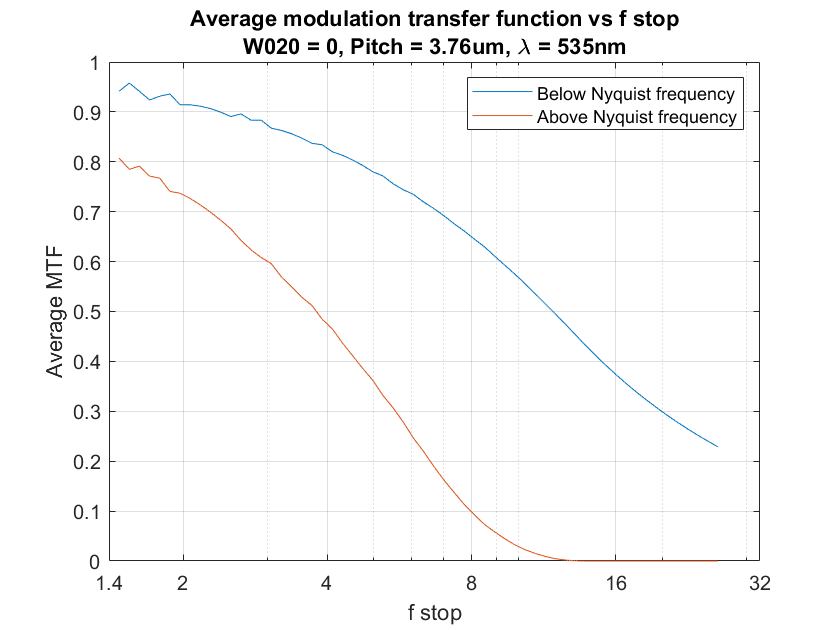 Above f/11, diffraction is negligible. However, setting the lens to f/11 results in quite a bit of degradation to below-Nyquist sharpness. F/8 might be a better compromise.

Adding a small amount of defocus (Seidel W020 about half a wavelength) seems to improve aliasing more than it harms sharpness: 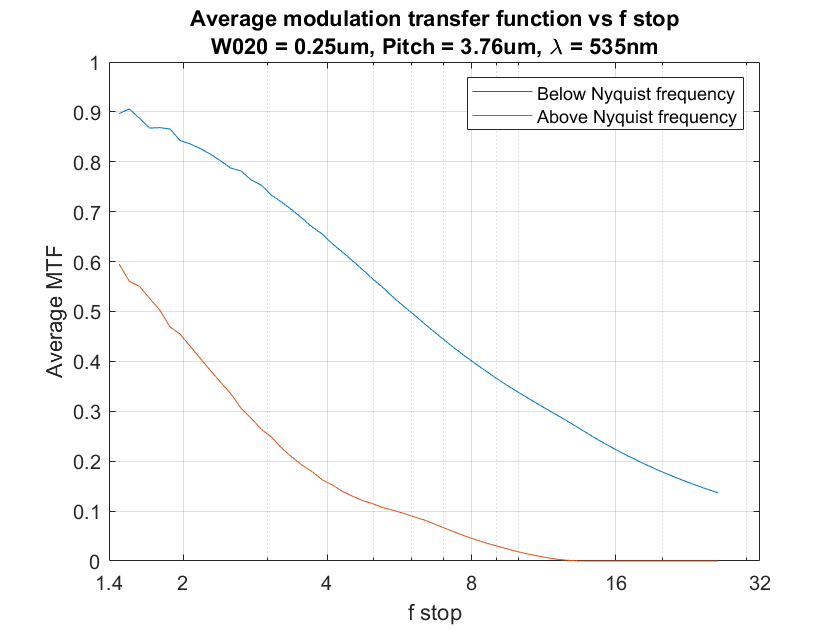 If a little is good, is a lot better? 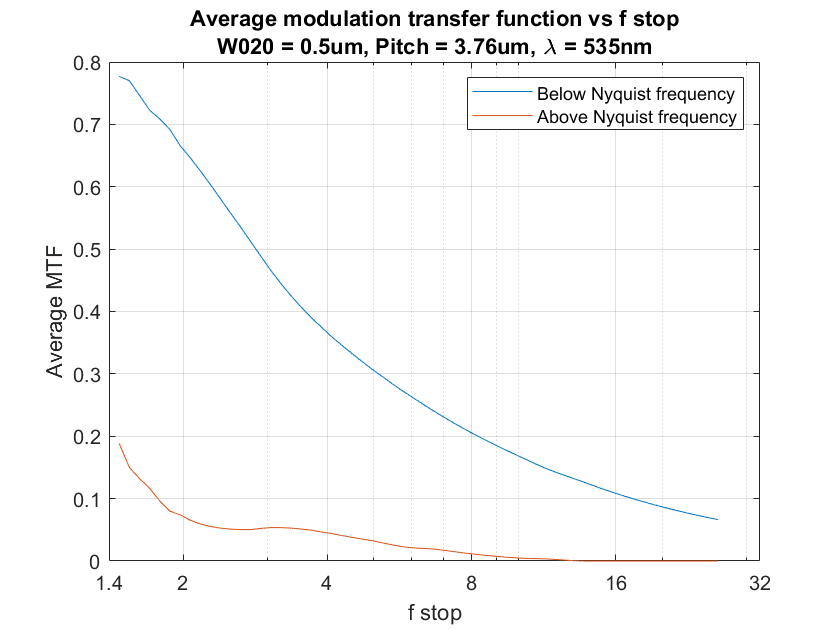 Maybe. How about even more? 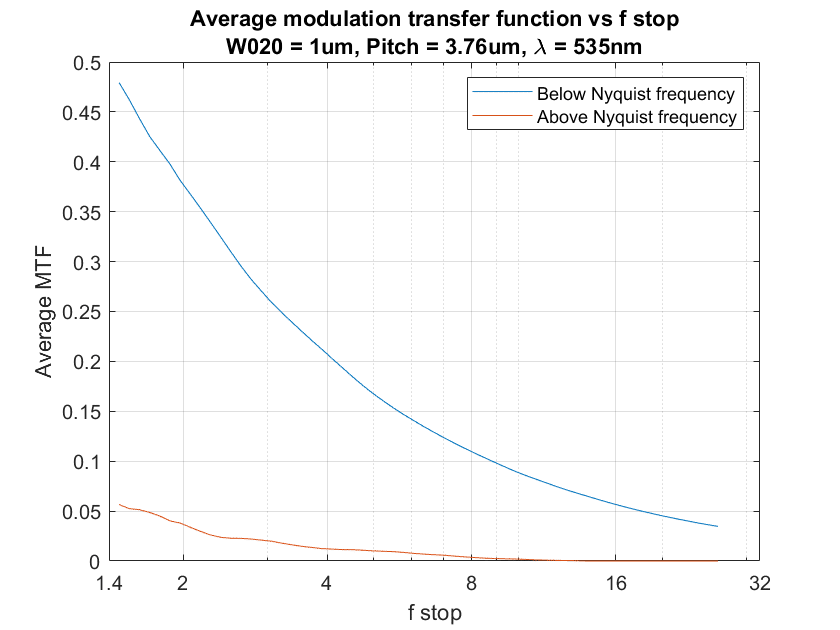 Looks like we’ve gone too far, even though aliasing is quite low now.

Can a little spherical aberration help? 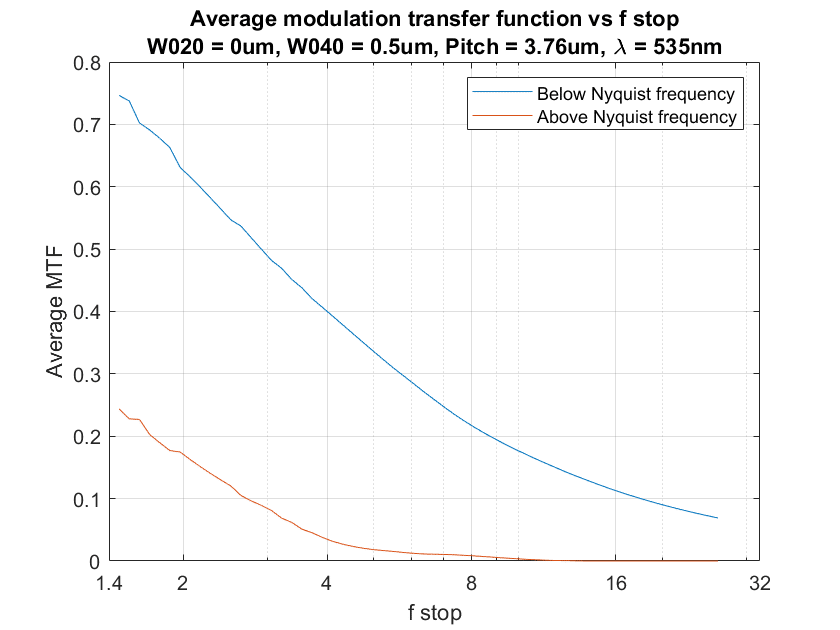 It might be worthwhile exploring combinations of defocusing and spherical aberrations, but before I do that, I need to consider the limitations of the above study.

I thought these results were sufficiently interesting for presentation here, even though this cake is maybe 10% baked at this point.