You are here: Home / The Last Word / Optimizing aperture and focus distance, an example

In the last post, I showed you the results of a blur management optimizer that I wrote this morning. Now I’m going to try it out on an outdoor scene. You’ll recognize it; it’s one I use a lot for testing. I used a GFX 50R and the Fuji 45 mm f/2.8 lens. I measured (with a Nikon Aculon laser rangefinder) and have marked some subject focal plane distances (roughly corrected for angle away from the lens axis) in meters. 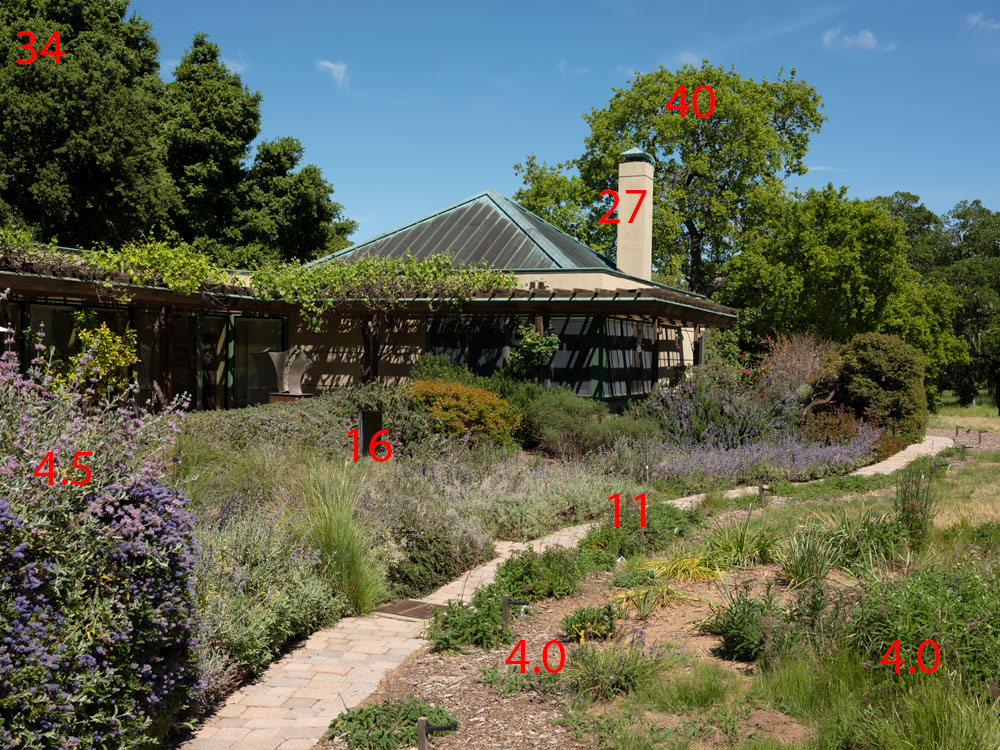 Let’s say all the marked parts of the subject are equally important, and see what the optimizer tells us: 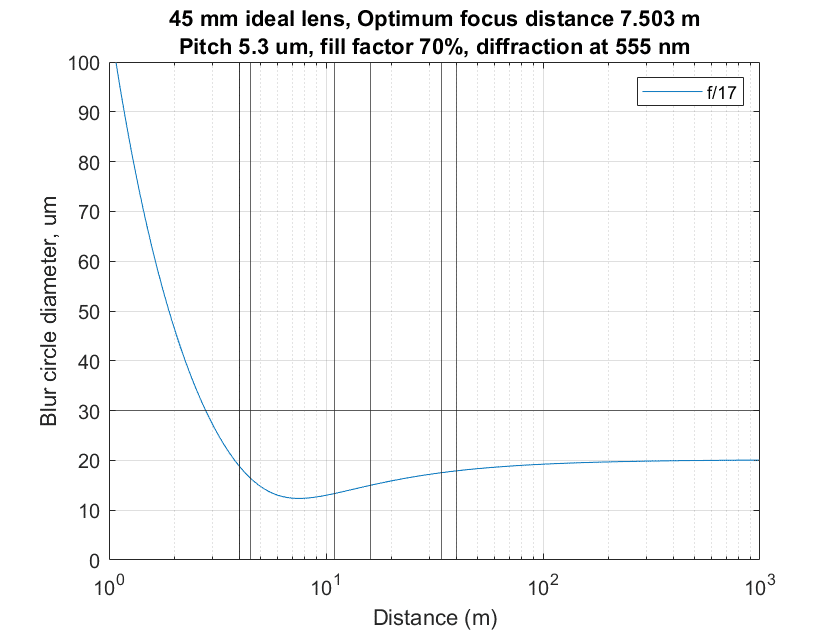 It says to stop down a little past f/16, and focus at about 7 and a half meters. If you do that, the blur circle at the closest marked points will be 20 micrometers (um), and it will be at least that good from there to infinity. A 20 um blur circle is not very sharp — it’s about 4 pixel pitches, after all — but that’s the best we can do if we are about all those things being as sharp as they can be in one capture. The horizontal line that interests the vertical axis at 30 um shows one of the standard CoCs that’s used in DOF calculators. The vertical lines mark the distance to the marked places in the scene. You’ll note that the greatest sharpness (smallest blur circle) is achieved where there’s nothing we care about. Too bad.

Here’s the same data but inverted, so we’re looking at the number of blur circles per sensor height: 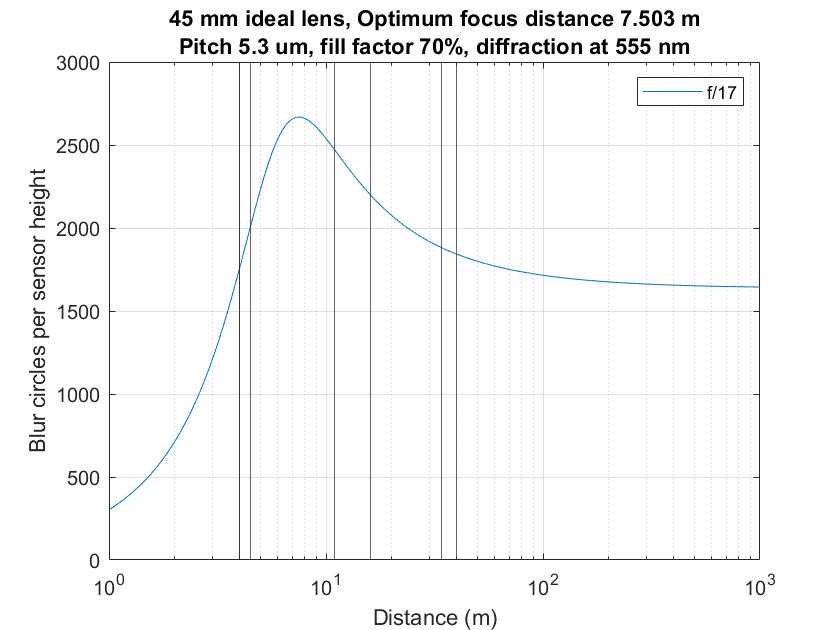 Now let’s say we don’t care about any of the three lower foreground areas. Now we get: 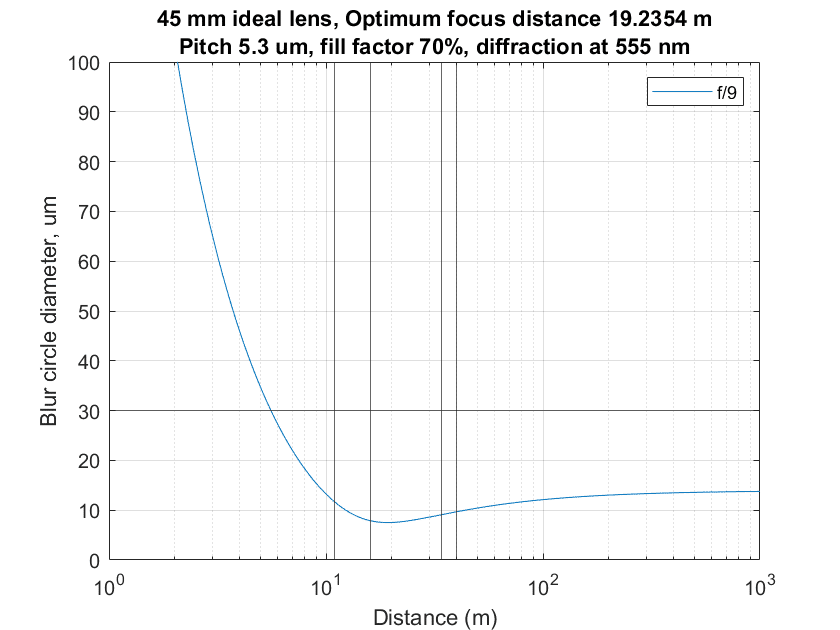 We can open up more, and thus the largest blur circle for our points of interest is about twice the pixel pitch, which is passably sharp.

Looking at it the other way: 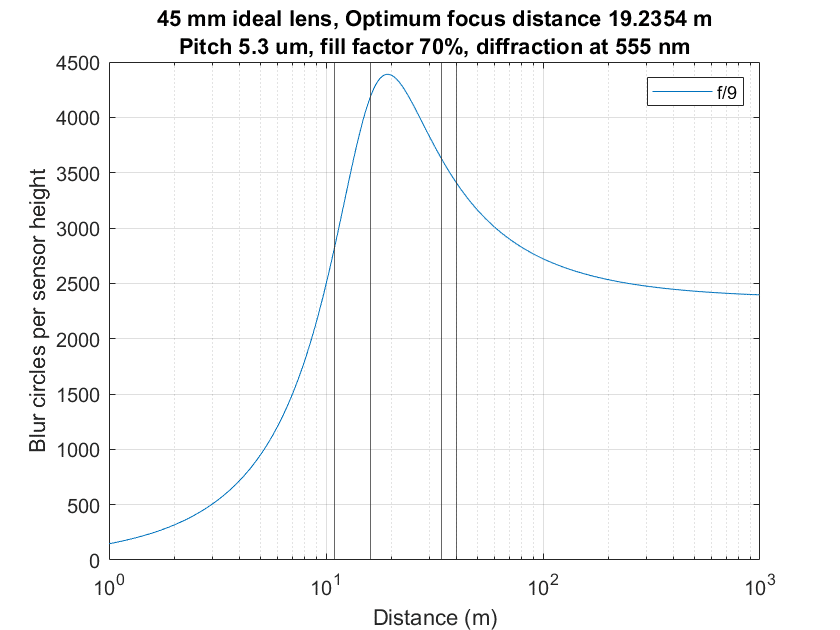 I wouldn’t be to apprehensive about trying to shoot this shot. I would be most uncomfortable trying to pull the top one — trying to get the foreground sharp, too — off.